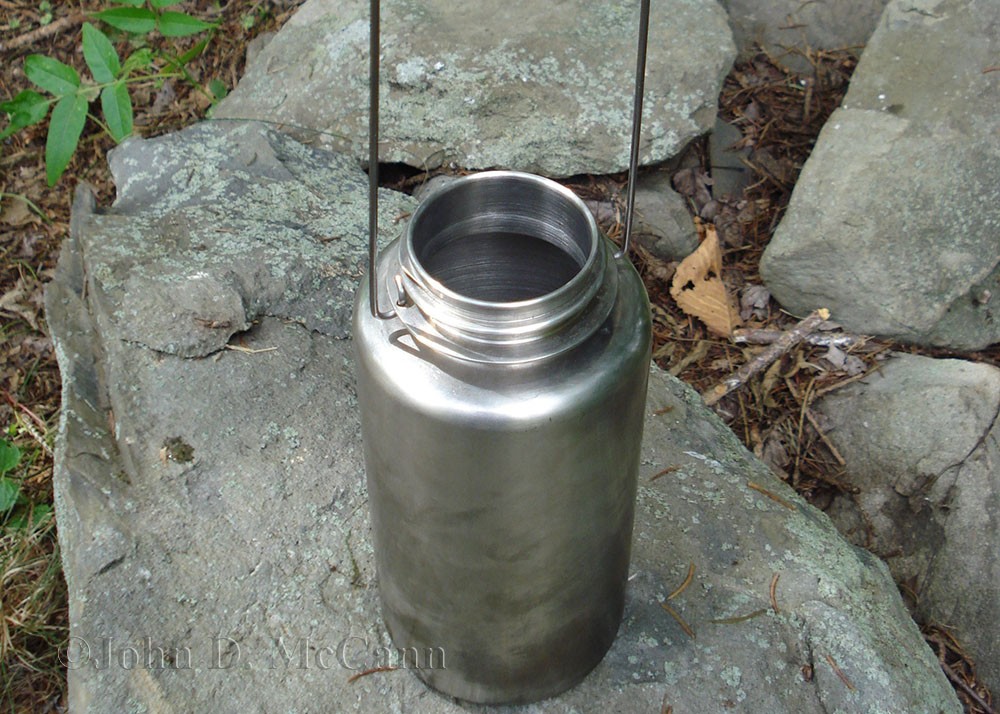 I have always preferred the Nalgene Stainless Steel Water Bottle (originally made by Guyot) as it is the most substantial bottle made, has deep threads, and a completely flat bottom. I wanted to be able to hang my the bottle over a fire in order to boil water, one of the advantages of having a stainless steel bottle. The bottle obviously gets hot, and I wanted a way, not only to hang it, but lift it if I set the bottle in the coals of a fire. Over the years I have tried various modifications and thought I might share some of them.

If you carry a small locking snare in your kit, it can be used for one of the simplest bails for a Nalgene Stainless Steel Bottle. The bottle has a large lip at the bottom of the threads and the snare can be simply locked around the bottle between the large lip and the top of the bottle. But before pulling the snare tight, place the swivel from the other end through the back end of the loop, directly across from the lock. When you pull the snare tight it will hold the swivel end in place and you now have a bail. The pictures below will show this more clearly. 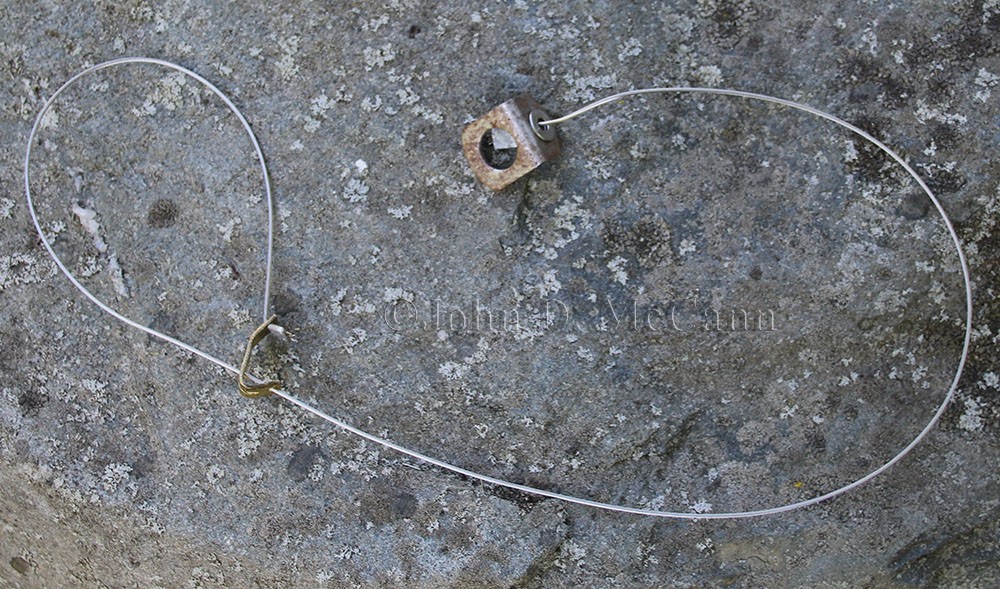 This a view of a small Thompson Locking Snare. 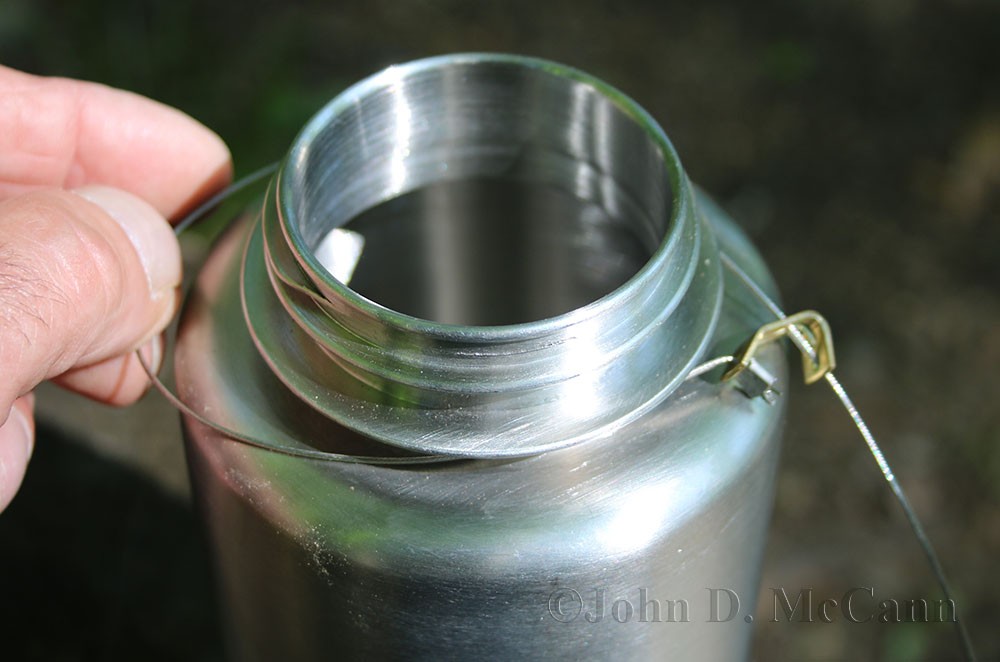 This shows the snare being placed around the bottle between the large lower lip and the bottle. 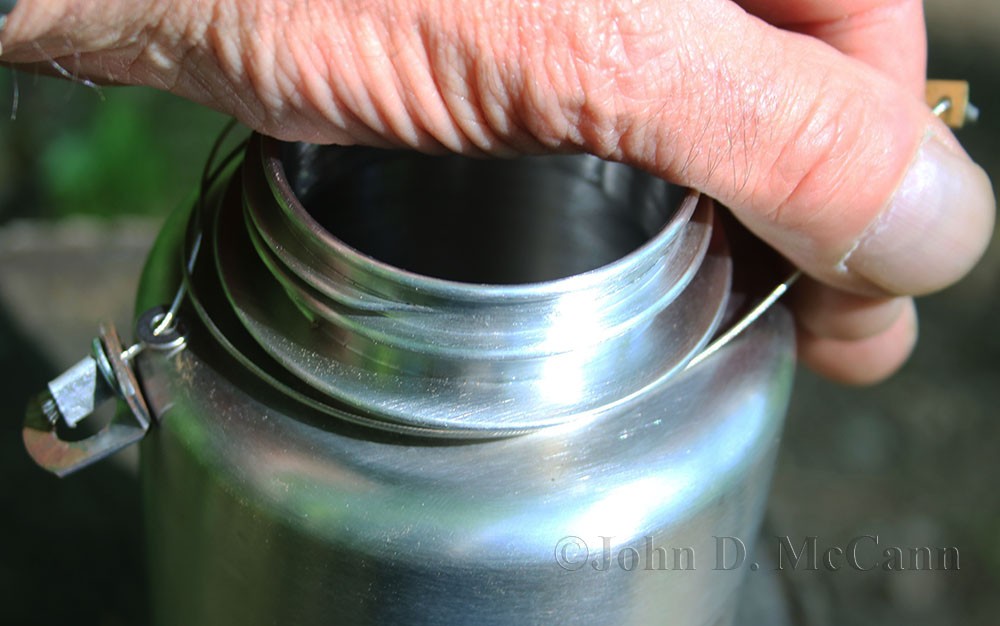 This shows the swivel end of the snare being placed in the loop across from the locking end, before
pulling the snare tight. 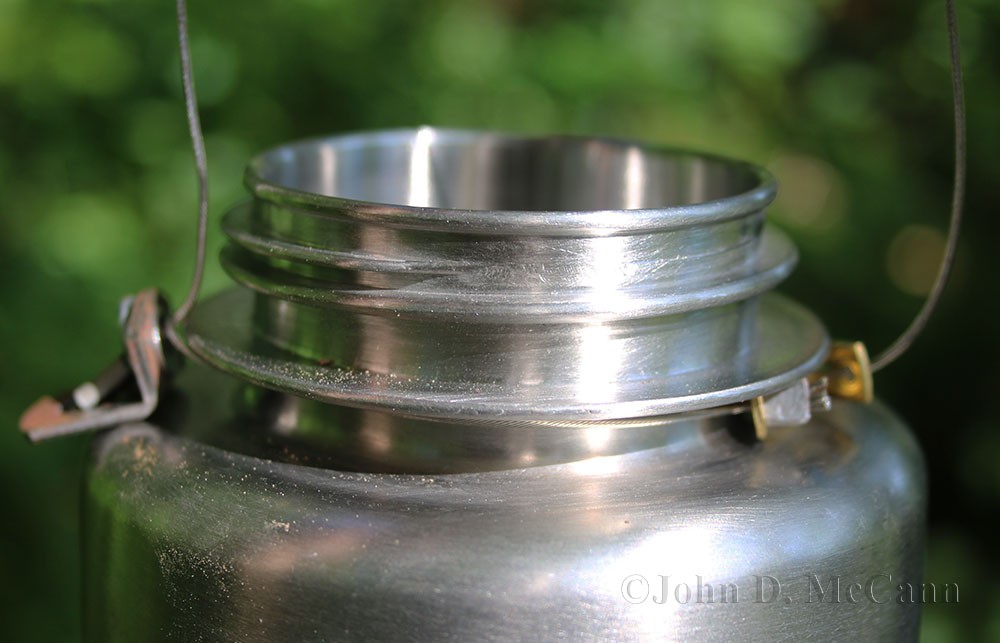 Once the snare is pulled tight and locked, your bail is complete. 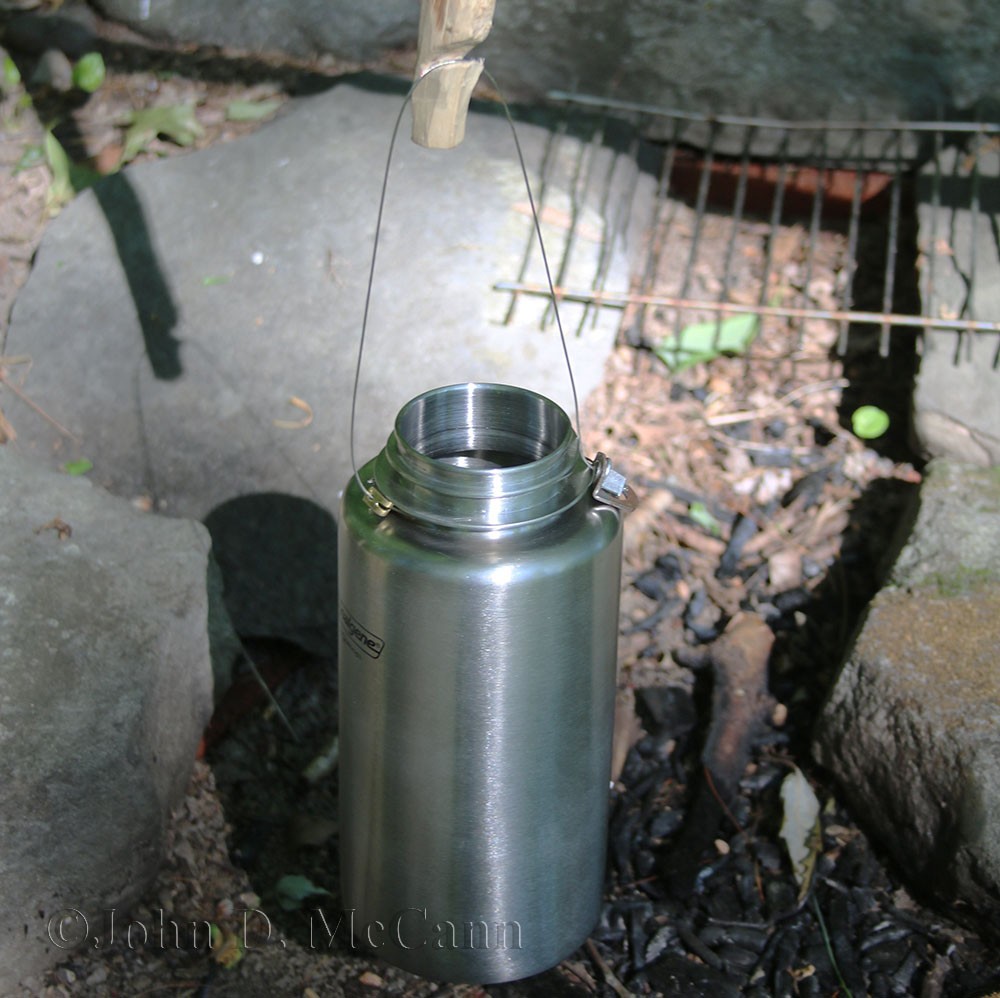 This shows the bail being used to hang the bottle over a fire pit.

A Split Ring And Wire Bail

I also wanted a wire bail but needed a way to attach it to the bottle. I wanted to drill holes in each side of the lip for a bail, but because of the way the seal on the cap works, I was afraid it would leak. So I drilled holes in the larger lip, below the threads, which sticks out further than the threads. I figured I could always use snare wire to fashion a bail, but went ahead and put small split rings through the holes. They can stay on the bottle and do not get in the way of the lid (I use an old plastic Nalgene lid as opposed to the lid that comes with the bottle, which I feel is too large).

Because the rings lay sideways to the bottle I just fashioned a bail with hooks that go through the split rings. It can be taken off easily and stored in your pack or kit. 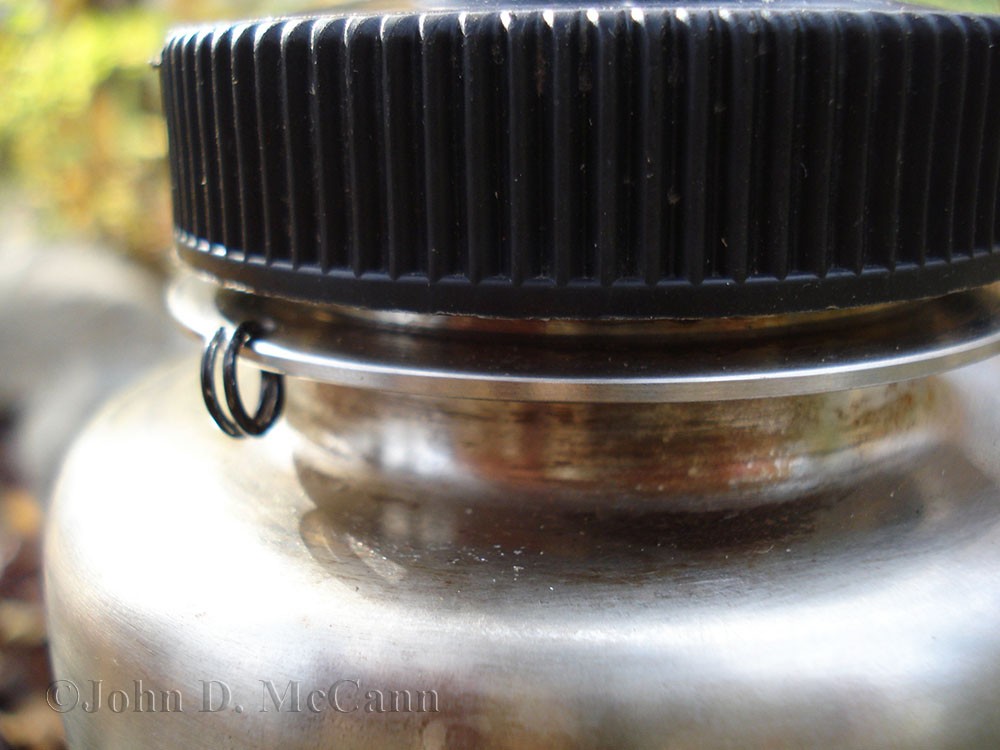 This shows the split-rings with the cap on. 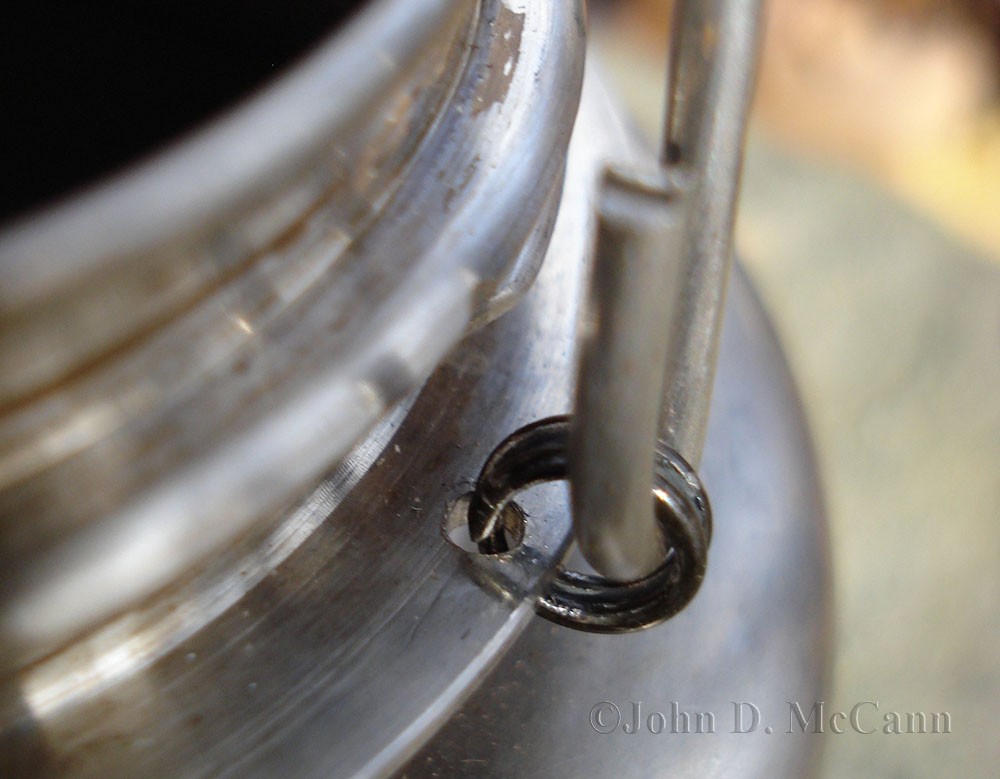 This is a close-up of the split ring through the drilled hole with bail. 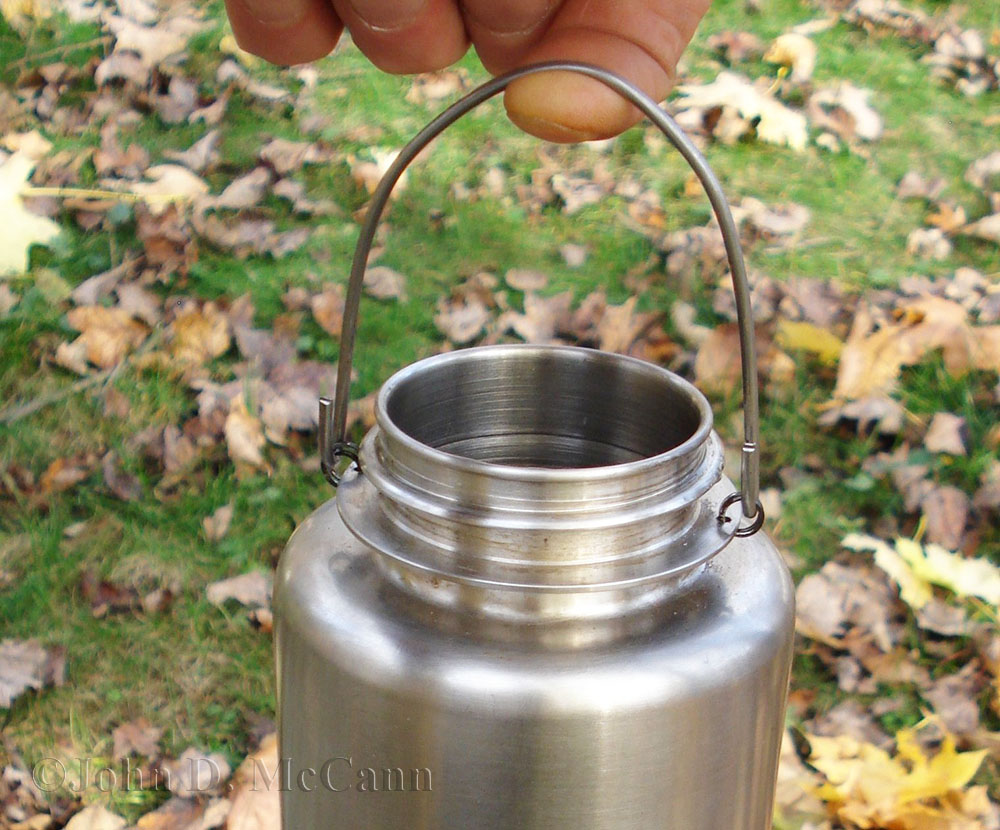 Here is the Bottle being held by the bail.

The above bail worked fine, but for those who have read my article "Free Standing Bails" I like bails that stay upright when attached to a pot. So, it was back to the drawing board. After various designs, configurations, and attempts, I finally came up with something that used the original holes that I had drilled in the bottle for the split rings. This bail was free standing, with the added benefit that it could be attached to the bottle if it was still in the fire, and could then be used to lift it out of the fire. 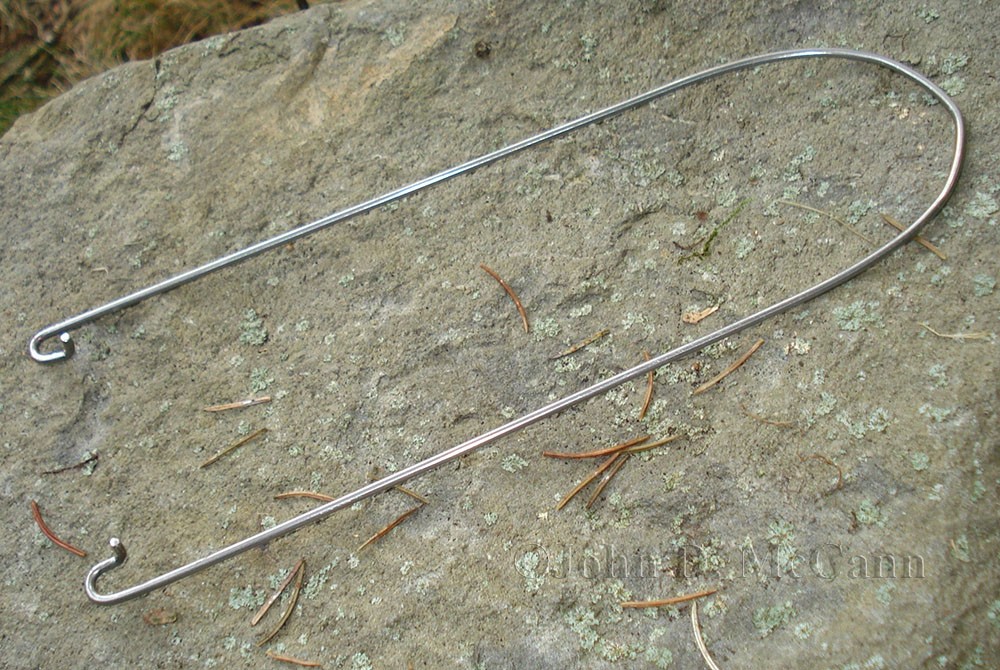 This shows the final bail I configured after various attempts. 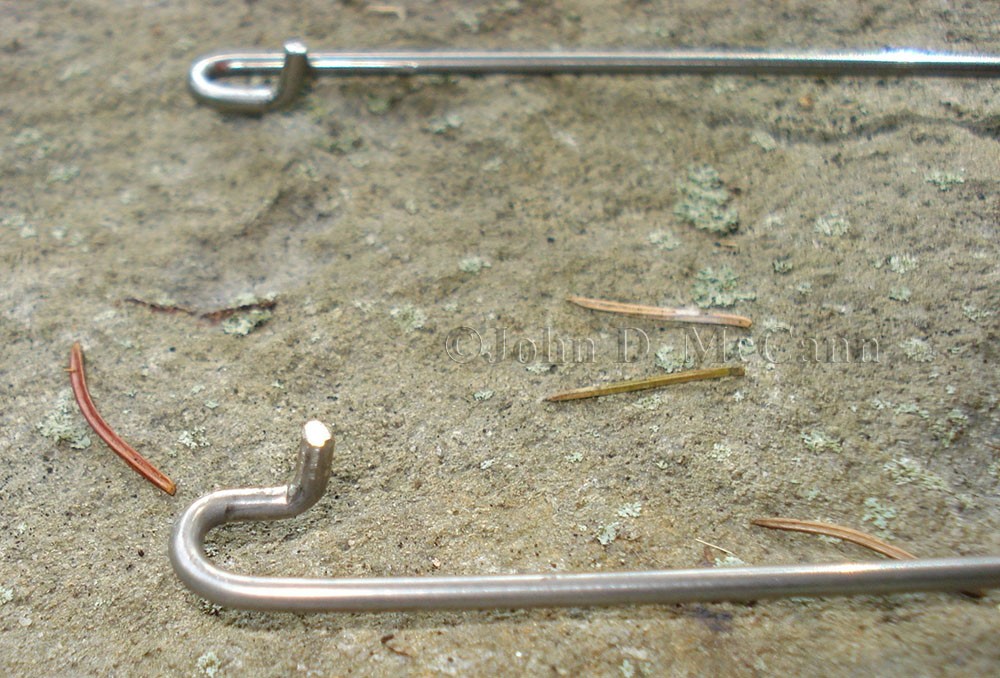 This is a close-up of the bends required for the bail to work using the original holes drilled. 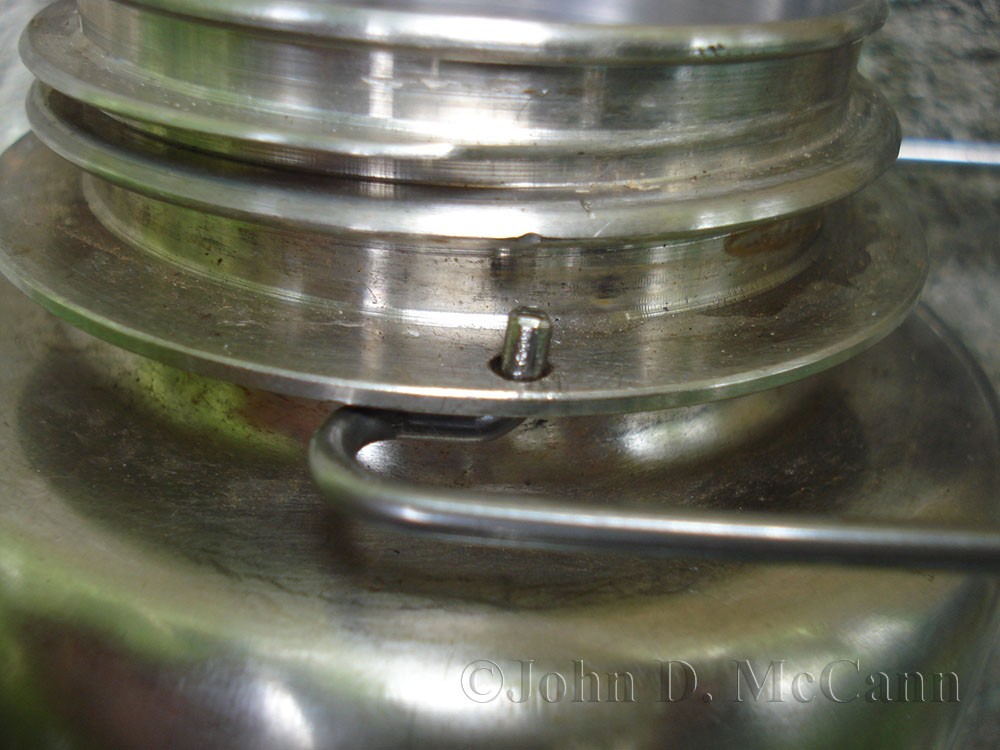 This shows the initial attachment completed from under the large lip. 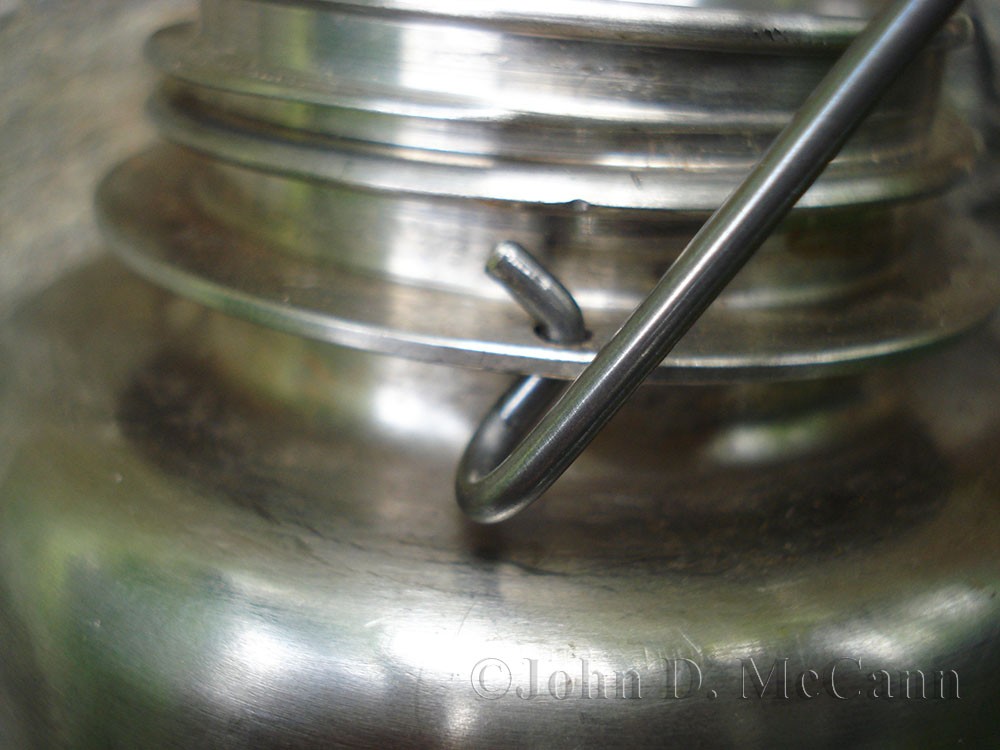 As you start to lift and rotate the bail, it slides up through the holes. 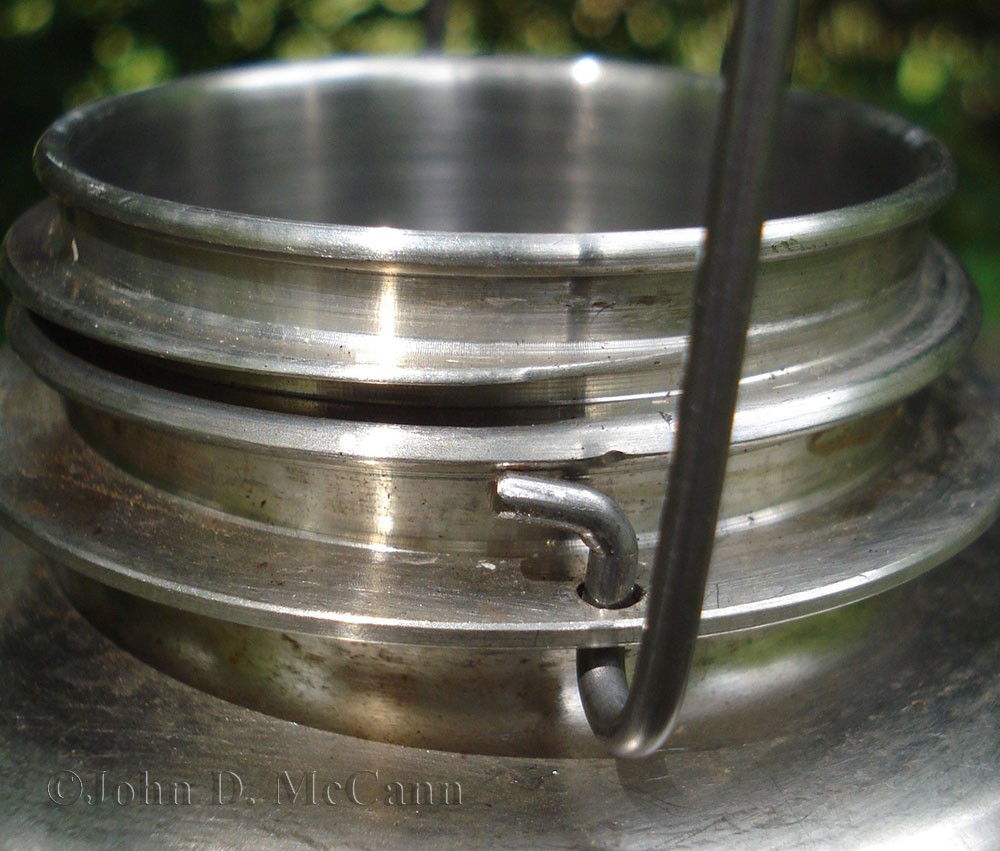 It is then caught by the "U" shape of the bail and the outward pressure holds it in place. 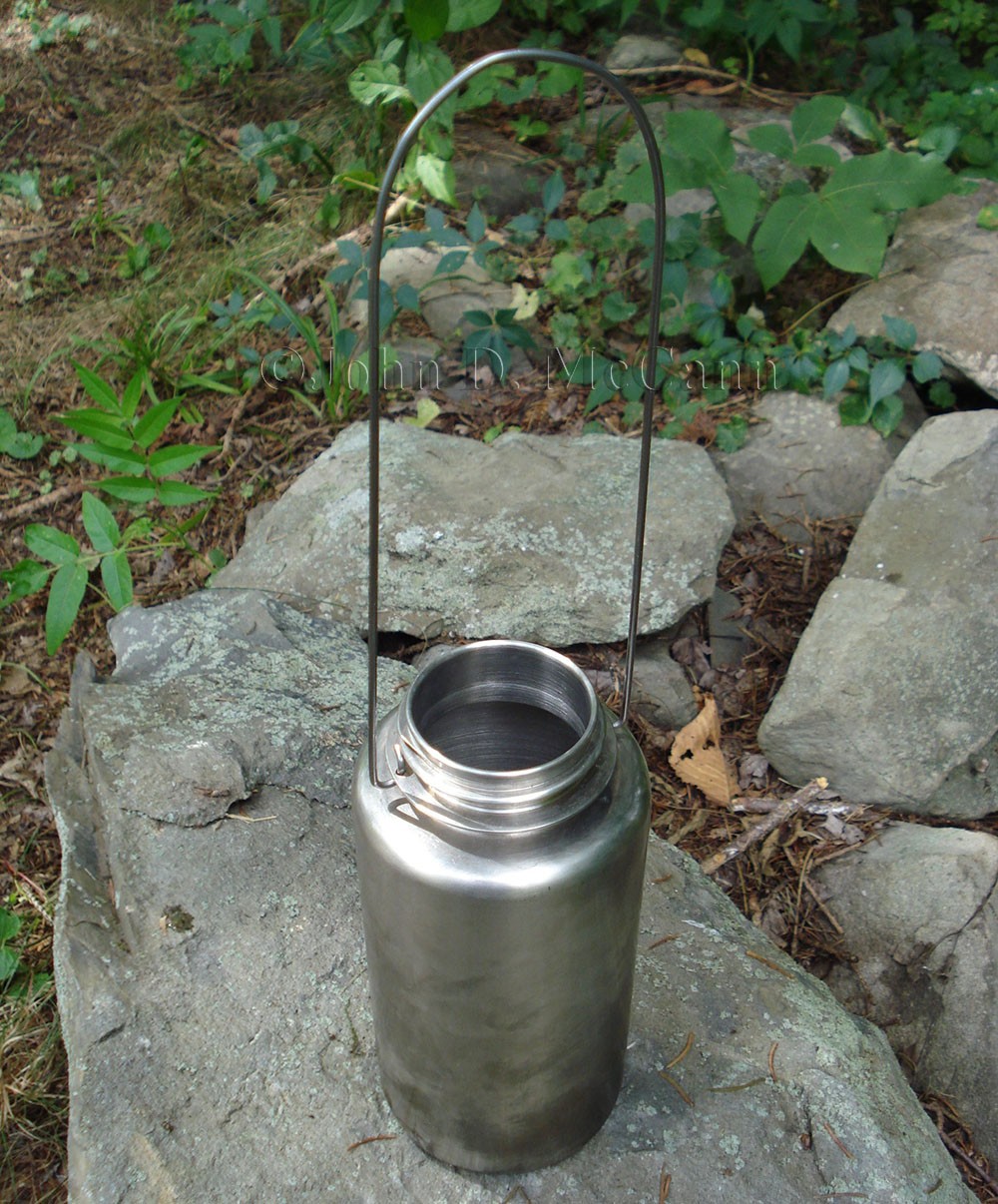 Once the bail is upright, the side pressure of the bail locked it in an upright position.

I also wanted something that would allow me lift the bottle out of the coals of a fire without a bail. I fashioned some 3/32 gauge wire into a shape that would allow me to squeeze the handle so it would open, then close around the neck of the bottle, between the bottle and the larger lip I spoke of previously. Here are some photos.

This shows the configuration I bent the wire in for the bottle lifter. 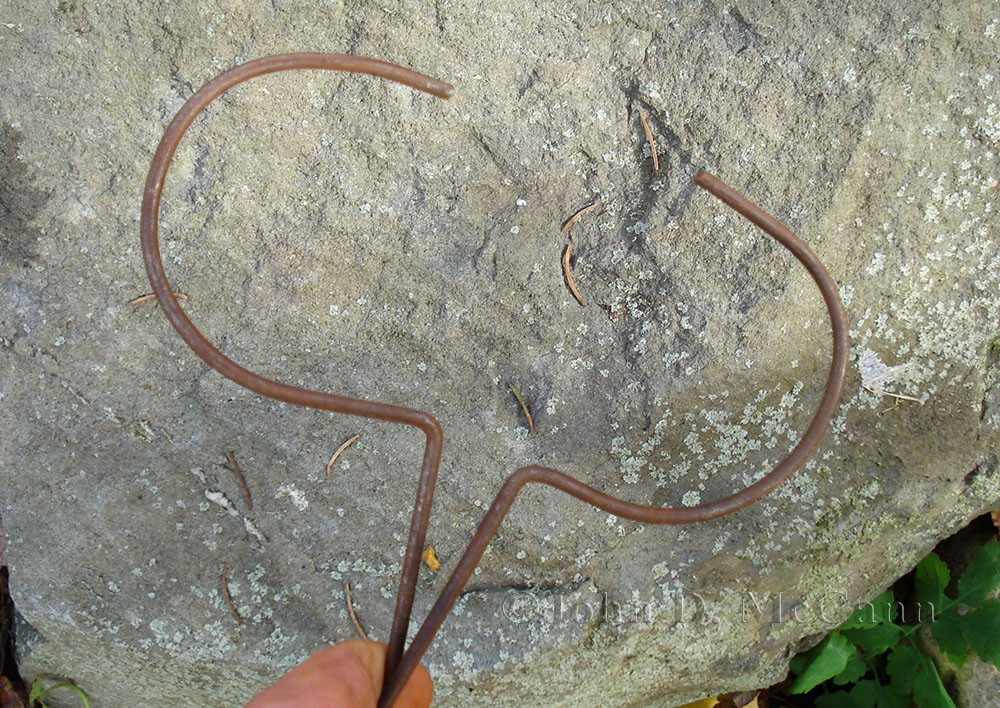 A close-up of the lifter open while squeezing the handle. 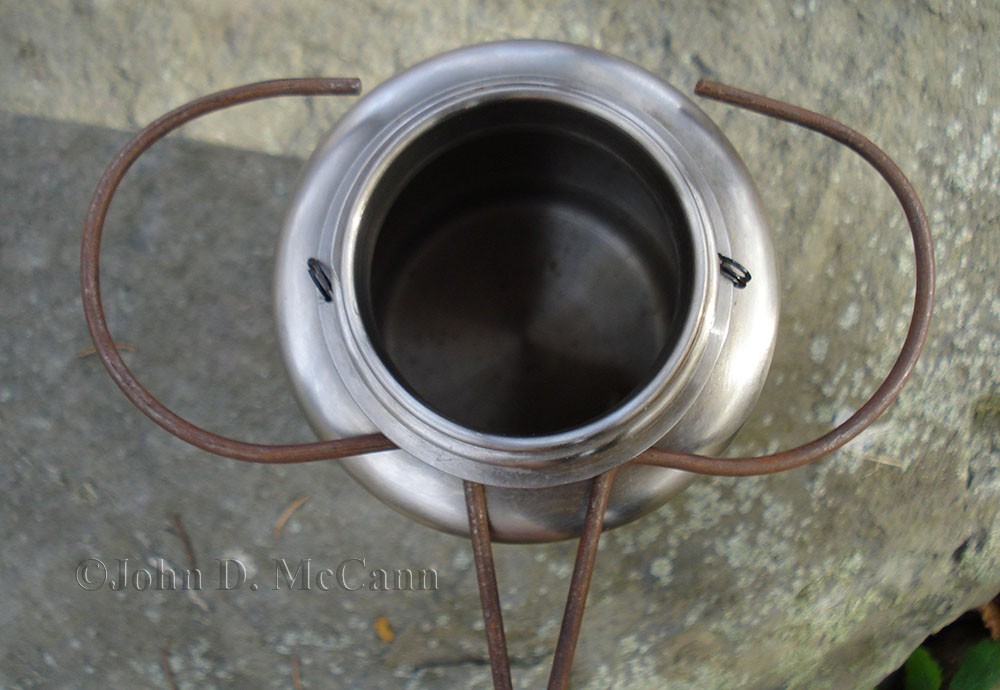 This shows the bottle lifter being placed around the bottle under the large lip. 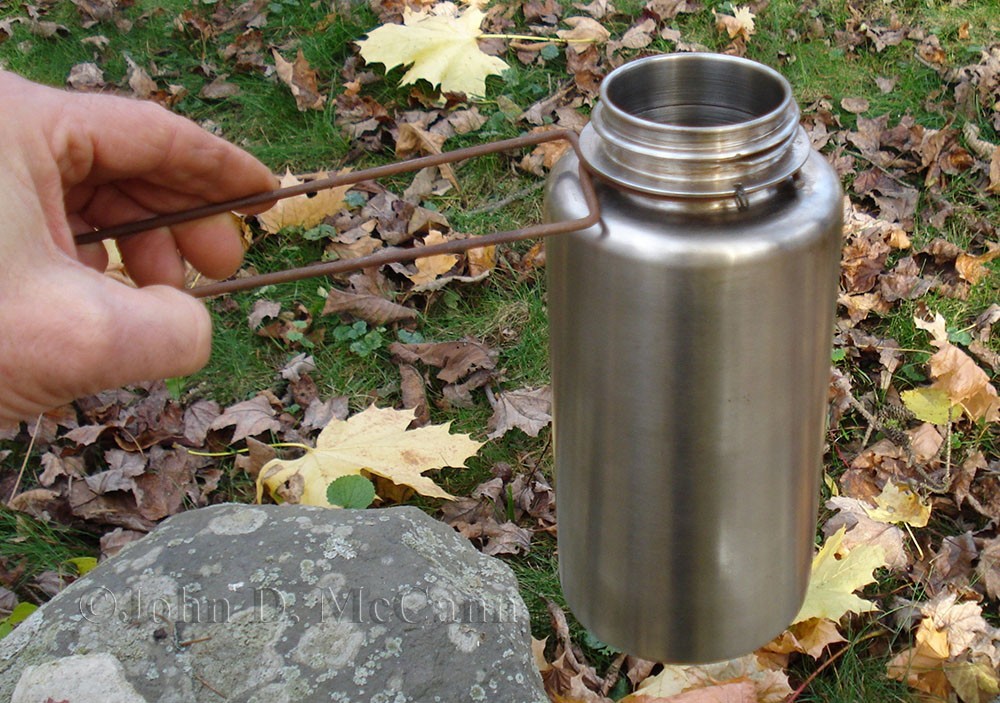 The bottle being held with the bottle lifter.

Well there you have it! Various ways I have come with to add a bail to a Nalgene Stainless Steel Bottle and lifting it from a fire.