Baselines, Handrails, and Off Shooting

No matter how good you become with a compass, when you start navigating through swamps, thick woods, or up and down rough terrain, you are bound to lose accuracy. Therefore, when studying a map, look for a long physical line that can easily be identified, such as a river, railroad tracks, power lines, a highway, trail, etc. This can be used as Base Line for navigation.

A Base Line provides a known line that you can't miss or pass, without knowing it. I live in the Hudson Valley, New York, and to the west of me is the Hudson River, which runs generally north and south. I know that as long as I head west, it would be impossible to miss the river, as it is a Base Line! A highway, Route 9, runs parallel to the river, a few miles east of the river. If you are at the river and head east, you can't miss Route 9 without crossing  it. This is another base line. If you know you are somewhere between the river and Route 9, you have a Base Line to the east and the west. Therefore if you head in either of those two directions, you can't miss a baseline.

In the following photo, you are at the position where the "X" is marked. You must navigate out but, because of the terrain, you would like to use a Base Line. There is a large Base Line southeast of your position, but if you remember your lessons well in regard to contour lines, you will note that they become very close together as you approach that highway. This means very steep terrain, and most likely cliffs. But if you look west of your position, you will see that the topography has a much more gradual slope, AND, there is a Base Line, being another highway. As long as you skirt around the swampy area, using the Base Line west of your position would be a good choice. 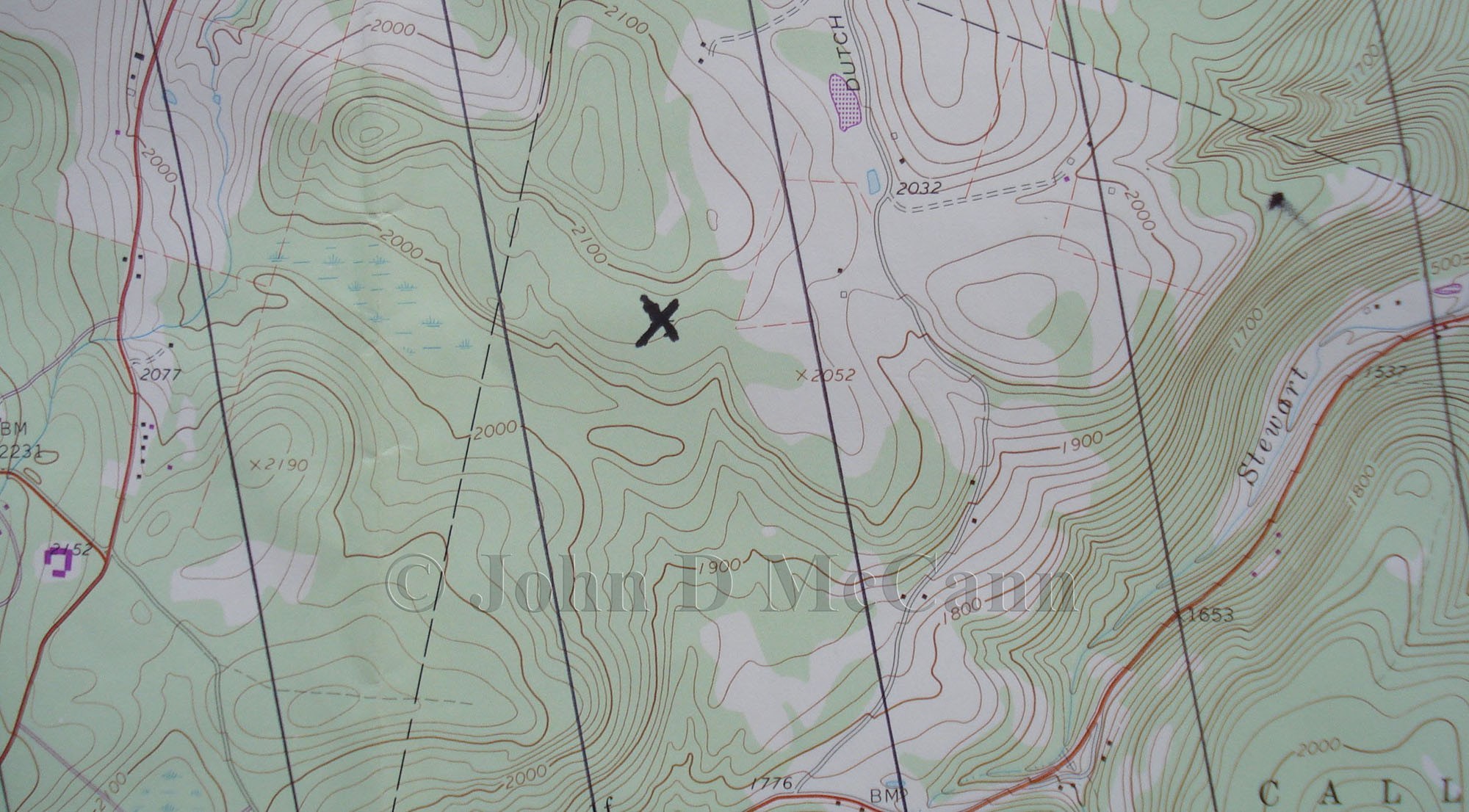 Baselines to the west and southeast of your position "X". Which would you choose? 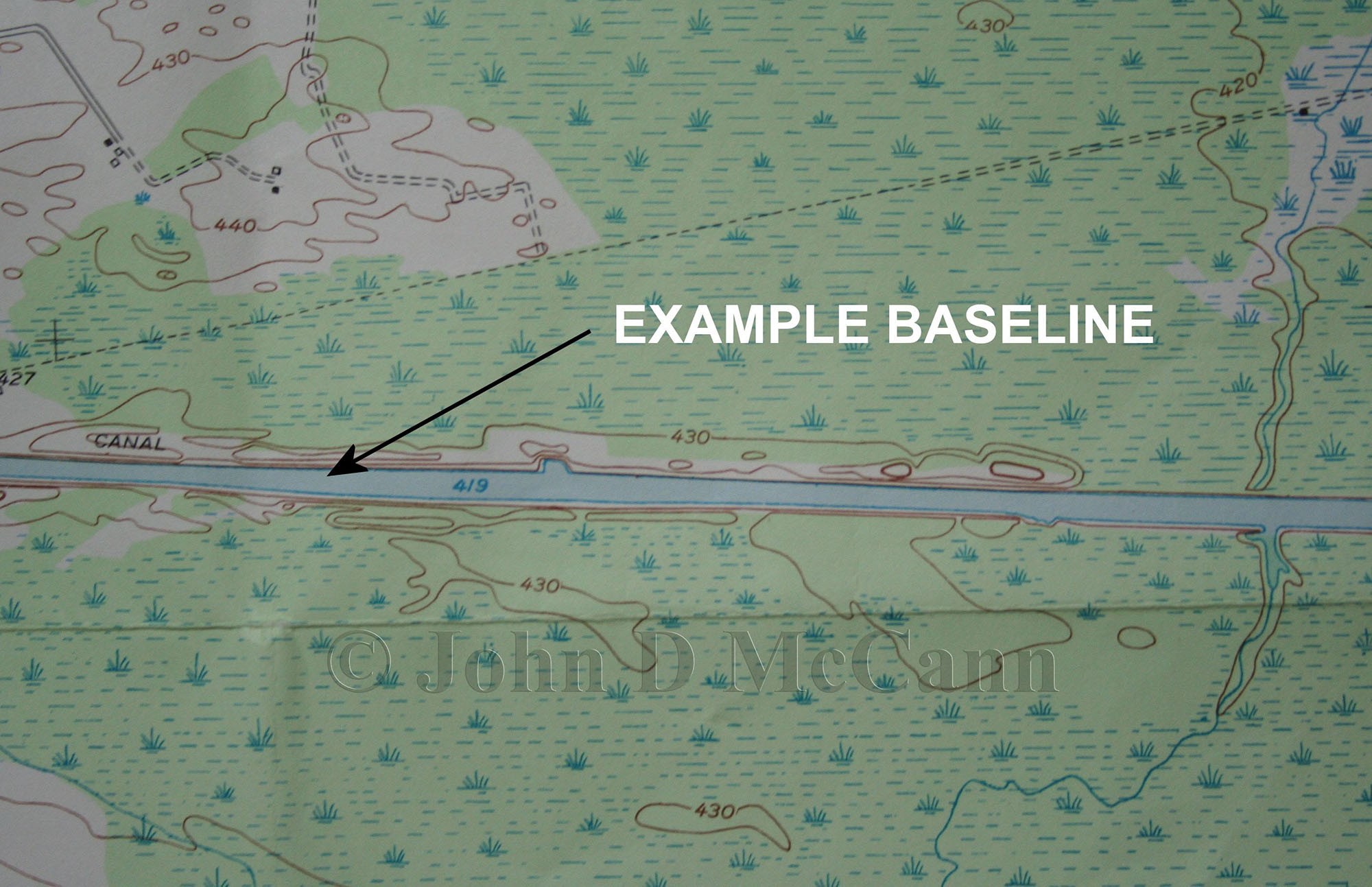 Like a Baseline, Handrails are either geographic landmarks, or man-made features that can be used to ensure you are heading in a specific direction. This could a river, mountain ridge, or power lines, railroad track, etc. It allows you to navigate, often without your map and compass, and yet keep in a general direction.

A good example was used under "Base Lines" above, in regard to having a river on one side of you and a highway on the other. To use these features as Handrails, as opposed to Base Lines, just stay between them and you can head generally north or south without worrying where you are. You will always be between the two, and if you want to leave that area, head east or west to one of the Base Lines. 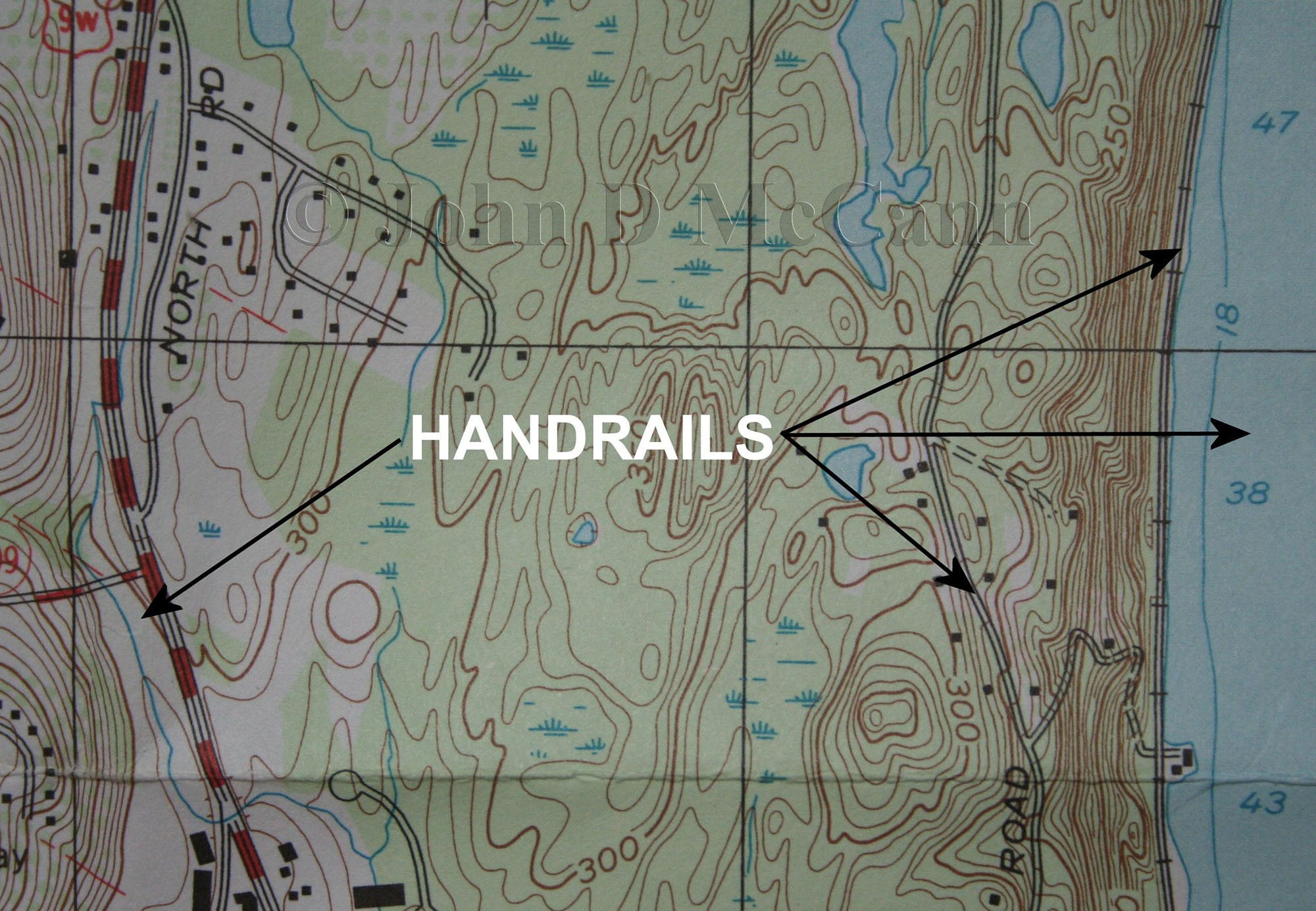 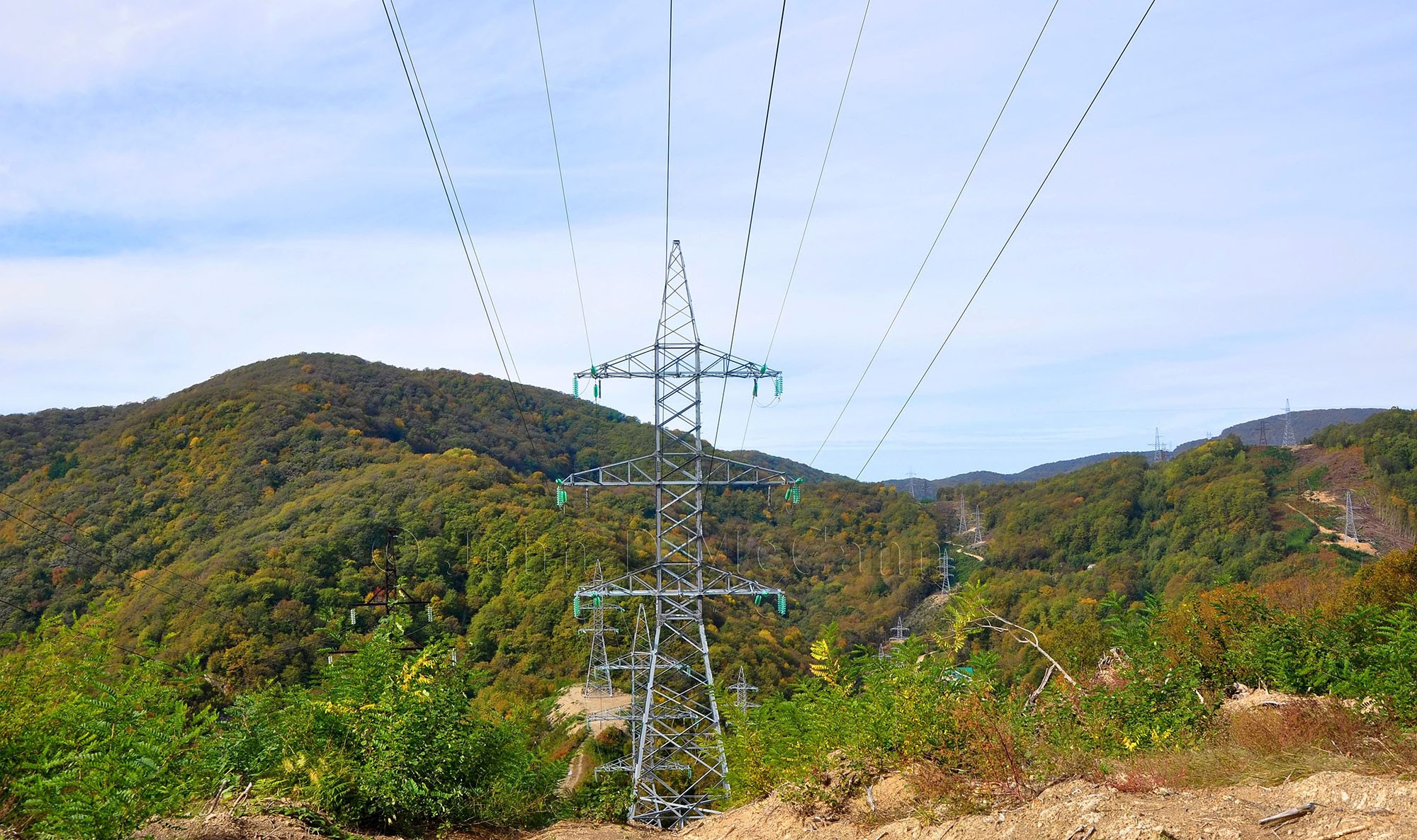 As shown in the opening photo, power lines could be used as a baseline or a handrail when navigating.

You may want to end up at a specific bridge, crossing a stream or river, but if you are off using your compass, you may miss it all together. Therefore there is a technique which can help you locate a specific destination, even if you are off on your navigating with the compass. It is called Off Shooting (also called Aiming Off) and it works like this.

So when heading towards the known Base Line, use a bearing that is intentionally off to the right or left of the spot you want to travel to. In the case of the following diagram, we want to travel to a location that is on a bearing of 60 degrees. So instead of using 60 degrees, we use 85 degrees, which will take us to the right of where we want to end up. However, because we have a Base Line, we know that when we reach that Base Line, we can turn left and proceed to our desired location. You don't even have to use your compass at that point, just follow the base line to the left and you will reach your destination. This could also be done to the left of our original bearing, and when we reach the Base Line, turn right and proceed to your destination. 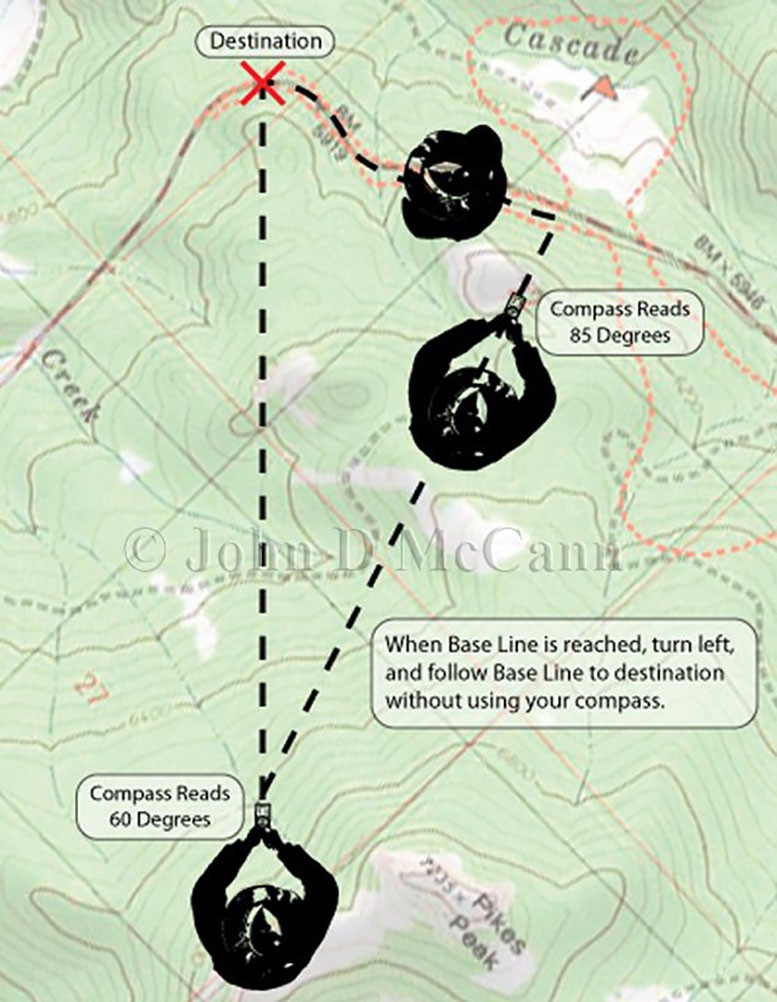 Diagram showing off-shooting as described above in the article.

I have heard some discussion in regard to people having a personal lateral drift, meaning they drift one direction or another. Some have indicated this is about "leg dominance" whereby right dominant people will normally circle to the right, and left dominant the opposite. This would mean that, when you are off-shooting, if you don't use the direction of your personal lateral drift, you might drift across your intended target before reaching it. I did some research on this and it seems inconclusive.

First of all, most people don't know their dominant leg, nor their personal lateral drift. There have been many studies in regard to this matter and some prove the above and many don't. If you are right handed would that mean that you are right leg dominant? Would this cause you to circle to the right, or because your right leg is stronger pushing off, you circle to the left?  It has been showed that if you are right handed, then you are probably right legged (using your right foot for most activities, like kicking a ball, etc.). But then, your left leg holds your weight most of the time during these activities so it might be considered your dominant leg.

So what does all this mean? I can't prove or disprove any of these theories. It means that you might tend to circle left or right for various reasons. It also indicates that this is a good reason to learn how to stay straight and avoid Lateral Drift. See my article "Staying Straight - Avoiding Lateral Drift" HERE.

There may be times when you just want to explore a specific area. All you need is a prominent feature that you can shoot a bearing on before you leave your position. Let's say you are in camp, and want to explore the general area to the northeast of your camp. Find a prominent feature north of your position and shoot a bearing to it, and write it down and keep it, as that is your baseline.

Now while you're out exploring, you decide to head back to camp. Just pull out that bearing you wrote down and dial it into your compass. Locate the prominent feature you used to get your baseline earlier and move left or right until the red end of the magnetic needle is boxed in the red end of the orienting arrow (keep in mind that this only works if you can view the prominent feature that you used to get the original bearing). You are now on the same line you were on when you shot the original bearing. All you need to do now is calculate your back bearing, and travel on that bearing back to camp.

This works even better if your camp is located on a base line like a stream or other long feature that runs perpendicular to the direction you headed out. Let's say you headed out generally north and your camp is located on a stream that runs east and west. When you figure out your back bearing later in the day, off shoot as described above, and when you get to the stream, you will know which direction to turn to return to your camp.