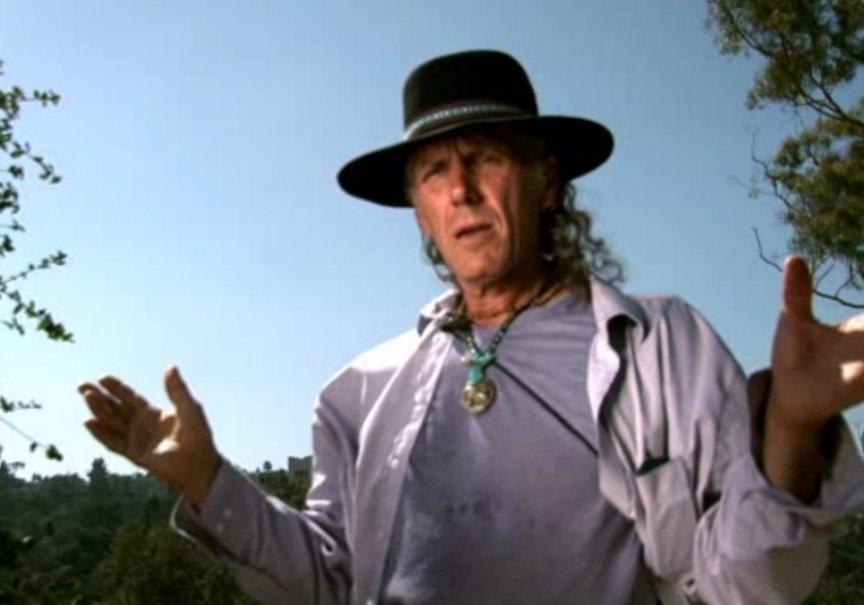 Over the years I have seen many survival schools come and go, yet a few have stood the test of time. One of these successful schools, owned by Christopher Nyerges, is the School of Self-Reliance. Many people are not aware that the School of Self-Reliance is possibly one of the oldest survival schools in the United States. Christopher was on the forefront of teaching survival and self-reliance and has been involved long before it was cool or in vogue.

I, personally, have always been impressed with Christopher Nyerges, not because of his longevity in the business, but his continued search for the true meaning of survival. Once you spend time with him you will find that he is humble, very skilled in the ways of survival and self-reliance, and, unknown to many, has a unique sense of humor. A zealous and veracious writer, Christopher has probably published more books and written more articles than anyone in the survival community.

Although I have spent time with Christopher, I never seemed to have the time to ask him the many questions I had. Therefore, I decided to interview him personally and create an article that would, not only answer my questions, but provide an insight into this unique and legendary proponent of survival and self-reliance. This is the result of our interview. It provides an honest and refreshing view of Christopher Nyerges as well as a better understanding of the varied courses available at The School of Self-Reliance. I have also included many photographs that have never been published before.... Enjoy!

John: So Christopher, what started your interest in edible plants, survival skills, and self reliance?

Christopher: Many factors. My mother grew up on a farm and would tell tales of harsh winters and brush fires and the depression and raising food. I first visited my grandfathers farm at age 10 and realized it was a different world there. I went back a few times and studied plants of Ohio. But my mother also got me interested in gardening and raising food. Plus, my mothers' family would find all the arrowheads in the fields in Ohio, and I started thinking, what Indians were here in CA. I got to know the local Indians and learned they were VERY different culturally. I began to study the botany and wild foods of CA in high school and college. 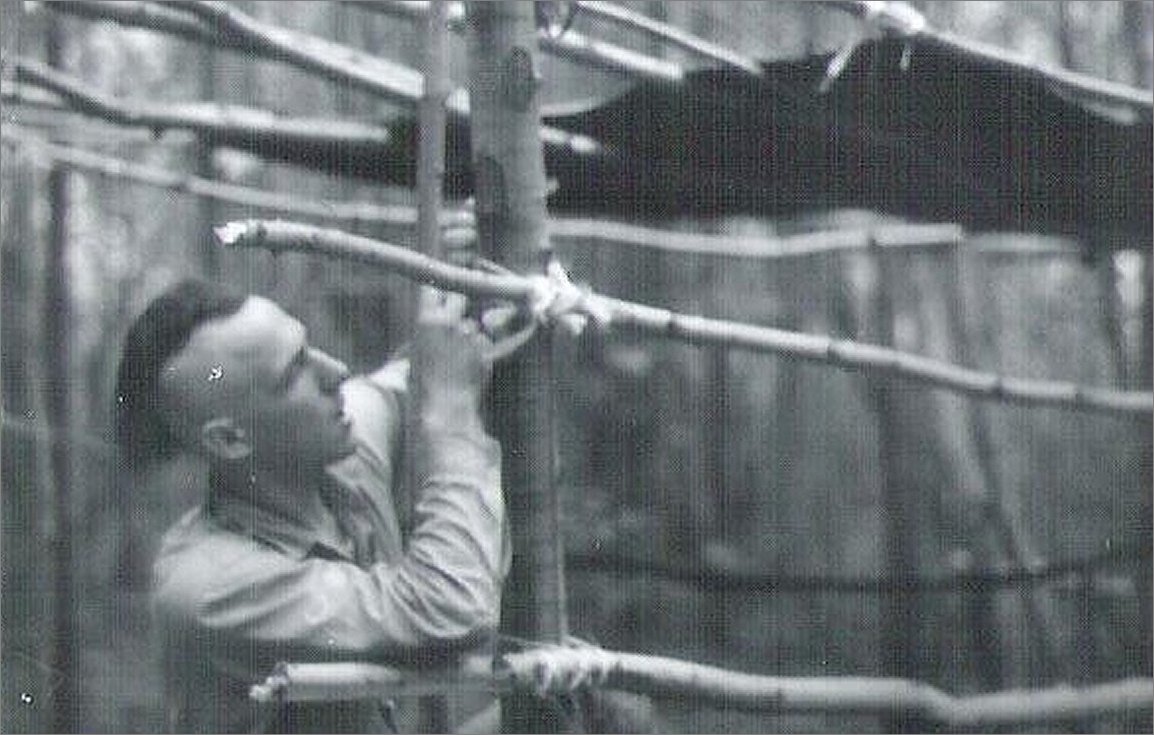 Christopher building a hut in the woods of Ohio in 1973. Photo by Richard Nyerges. 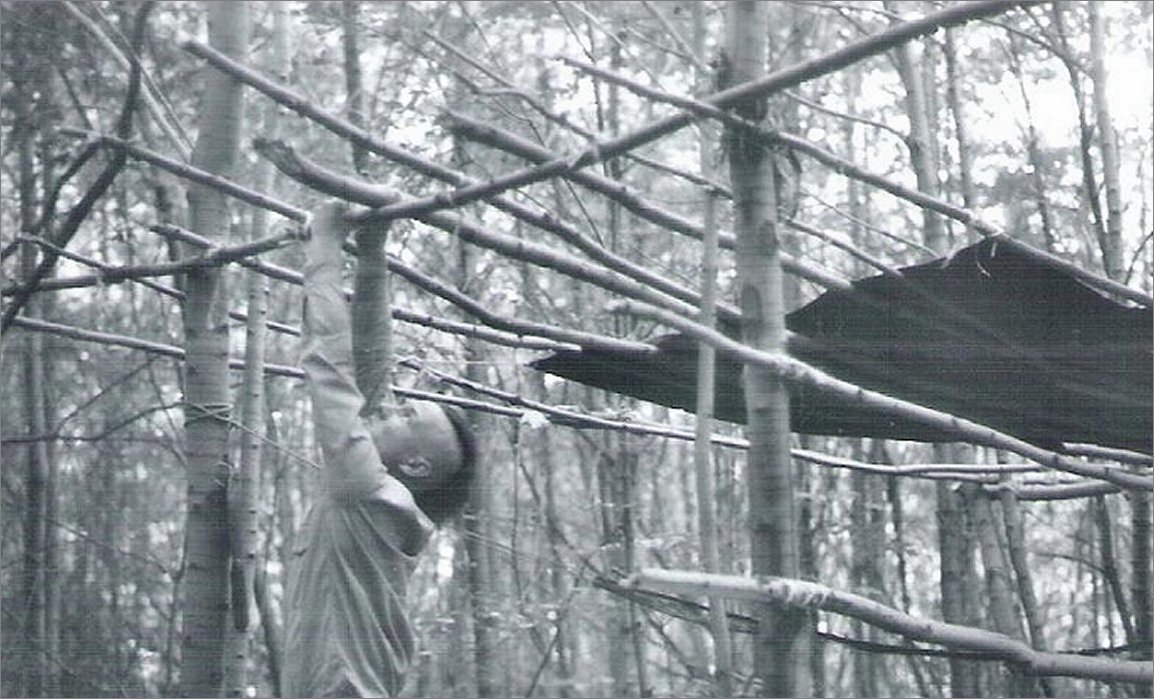 Christopher continues building his hut in the woods of Ohio in 1973. Photo by Richard Nyerges.

John: What is your philosophy in regard to survival & self-reliance?

Christopher: Philosophy? Hmmm. Most of what we all regard as real and important is mostly not real and not important. All of our society is our construct, and yet we all put our faith in it, barely ever understanding why we are here, what this is all about. Once I realized that many societies and civilizations have come and GONE, I realized that could happen to me too. That thinking – that things are not always as they seem – and could change rapidly – has been an overriding philosophy, I guess. Plus, the realization that we don't need all the stuff we think we need and that we can get by on a lot less, and live better too.

John: How long has the School of Self-Reliance been in existence?

Christopher: Though I personally began teaching in 1974, it was via other organizations – WTI, Sierra Club, Tree People. Somewhere around 1978 or so I started “Survival Services” and have used a few titles. In 1986 or thereabout, began using the name School of Self-Reliance with Dolores – we liked using the acronym SOS. As of January 2014, it will mark 40 years that I have been teaching! 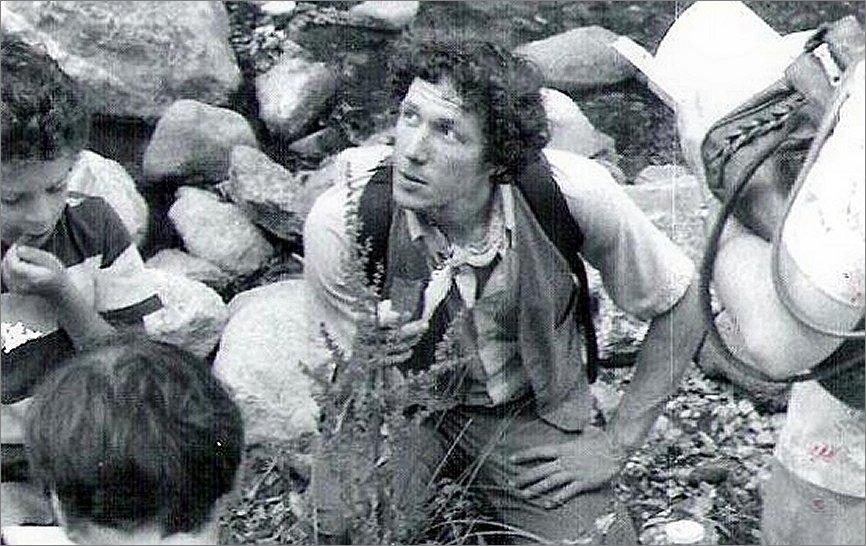 Christopher explains how to identify Curly Dock during a wold food outing in 1978. Photo by Nathaniel Schleimer. 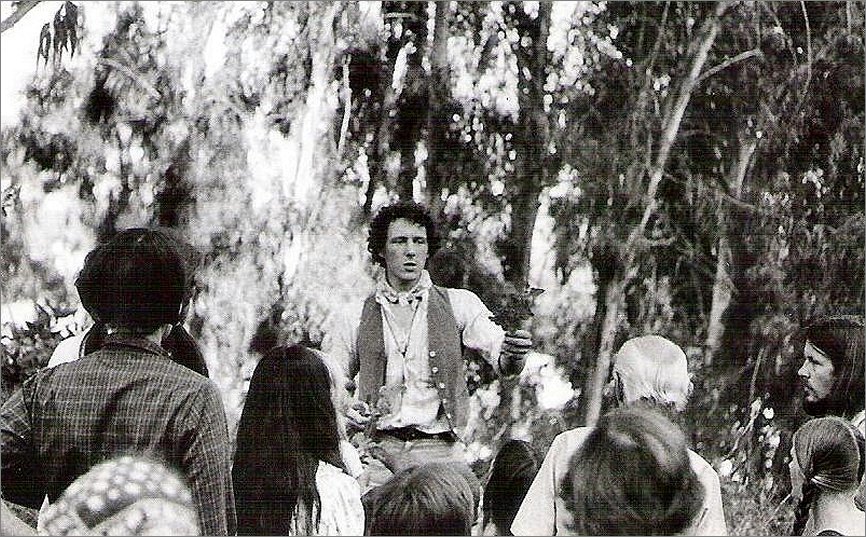 Christopher teaches how to identify wild foods at a wildlife preserve in 1978. Photo by Nathaniel Schleimer.

John: I've seen a lot of survival schools come and go. Why do you think yours has lasted so long? 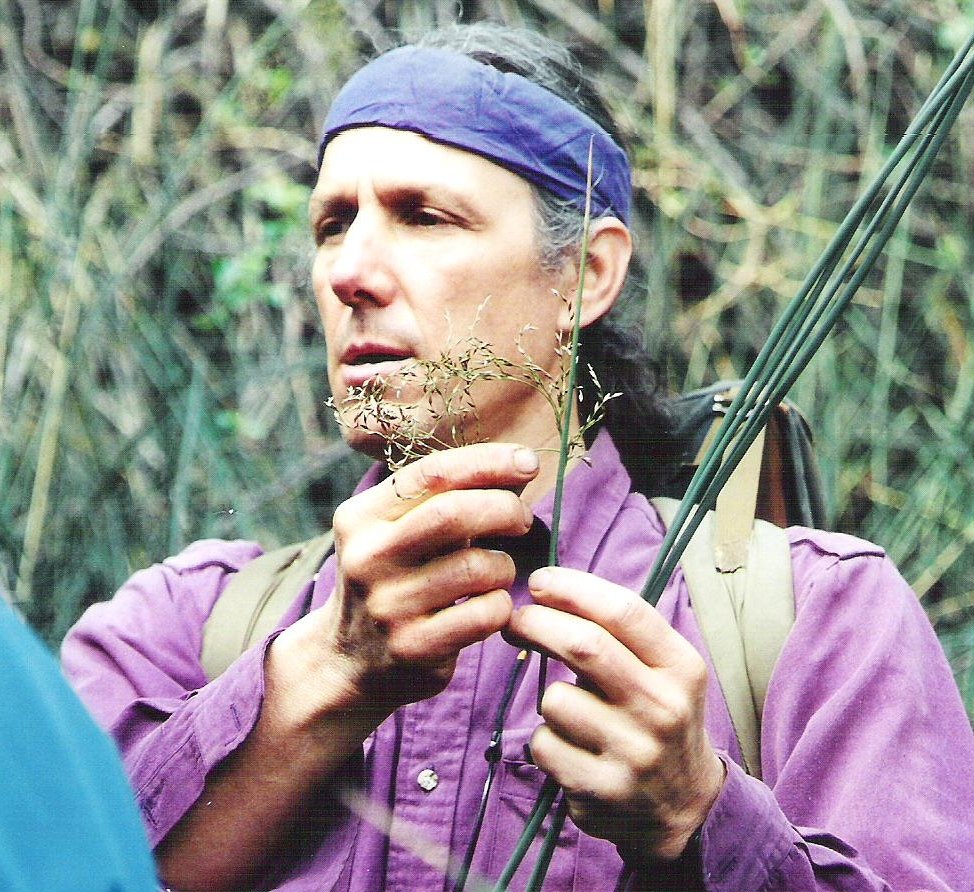 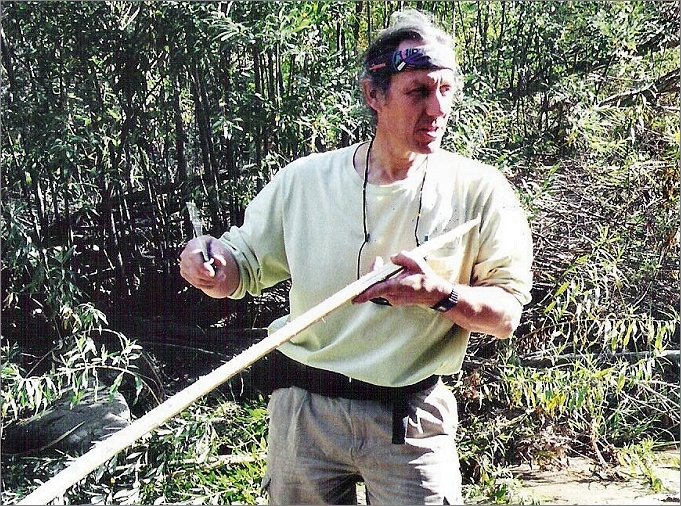 John: How did you start writing books and articles?

Christopher: Between ages 10 and 14, I realized the “magic” of the written word, and how literacy is really an art – a lost art actually. I wrote poetry and found that the poetry and writing took on a life all its own, separate from me, and that has also humbled me to the power of words to influence people, for the better or not. So I was on the school newspaper in high school, and by 1974 was selling newspaper articles and magazine articles to publications. My first book, Guide to Wild Foods, was someone else's idea, and I took it and ran with it. It took four to five years to finish since there were no computers then and I had no idea where I was going with it. But I learned to express myself via writing and have continued to do so.

John: How many books have you written?

Christopher: OK, Not counting booklets or transcripts of lectures, there has been:

- Guide to Wild Foods, several editions, then segued to Guide to Wild Foods and Useful Plants. Counts really as one book.
- Wild Greens and Salads, a cookbook (will be re-issued in 2014 or 15)
- Urban Wilderness (reissued in '99 as “Y2K Handbook) so that's really 2 books.
- Enter the Forest (about the Angeles National Forest)
- Testing Your Outdoor Survival Skills (spiral bound)
- Writing for Survival – how to sell your writings without going broke (spiral bound)
- Extreme Simplicity: Homesteading in the City (with Dolores Nyerges)
- How to Survive Anywhere
- Self-Sufficient Home
- Tunnel 16, a novel on Kindle
- Til Death Do Us Part? On Kindle
- And I have two new books contracted for 2014-15 release, on foraging

Just a sampling of some of Christopher's books that I have in my collection.

John: How many articles have you written? 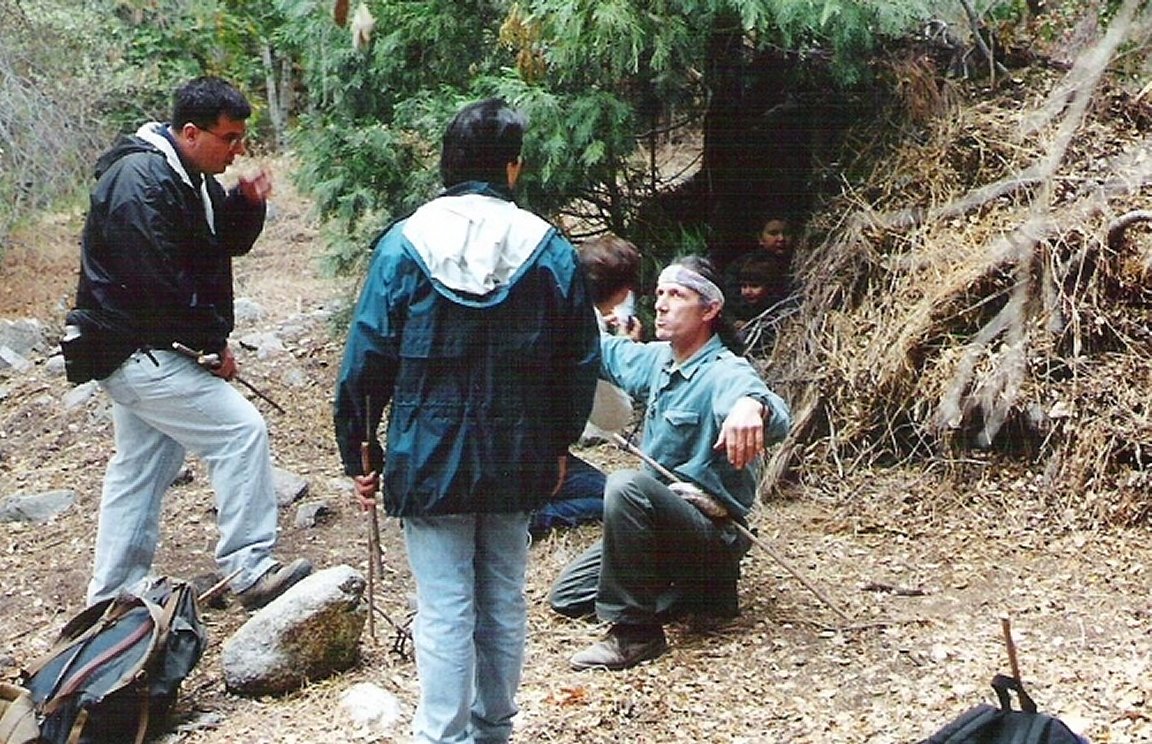 Christopher teaches shelter building during a survival skills outing, circa 1993. 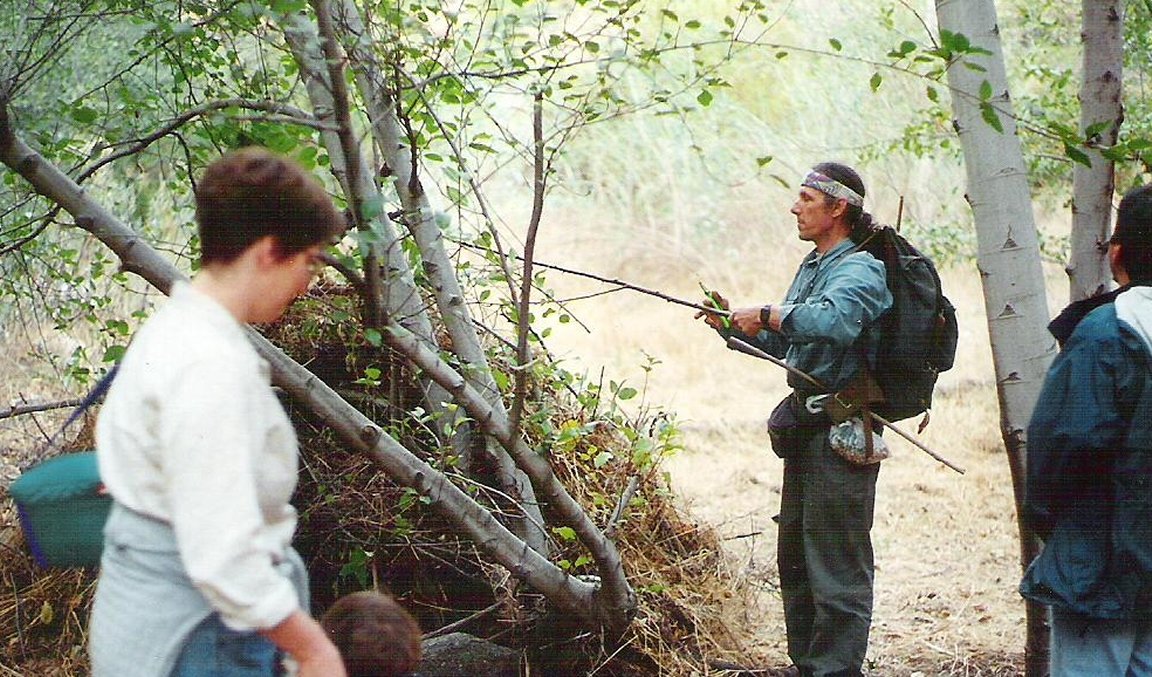 Christopher at the same survival skills outing as above, circa 1993. 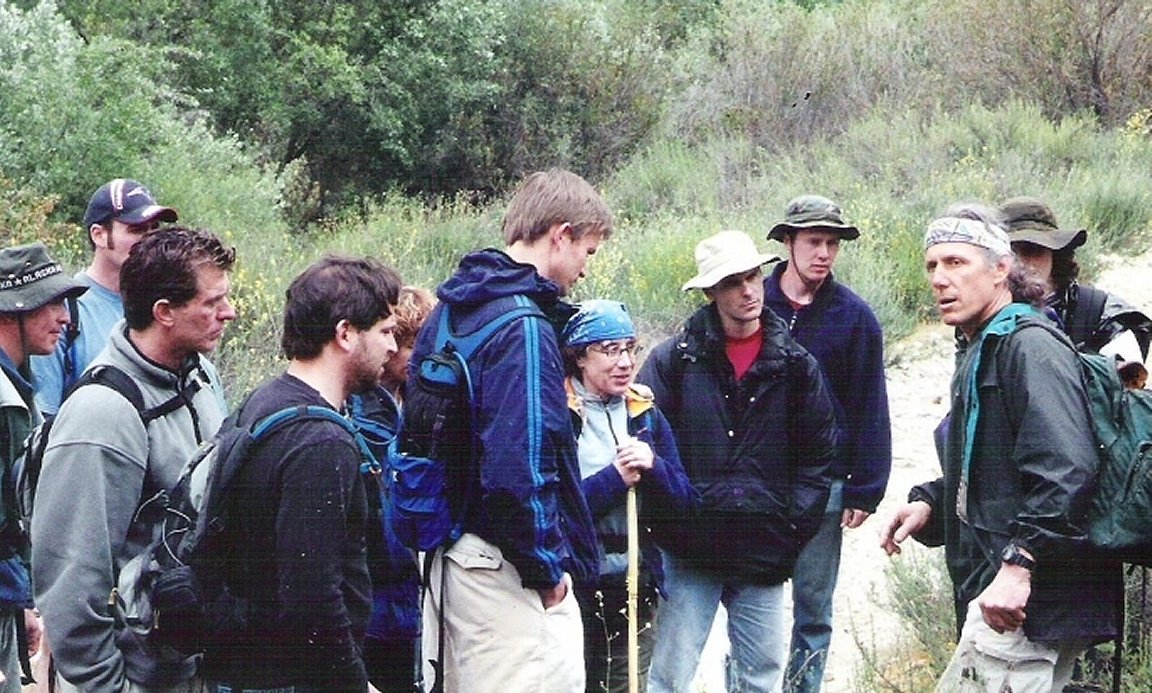 Christopher talking to a group of students during an outing, year unknown. 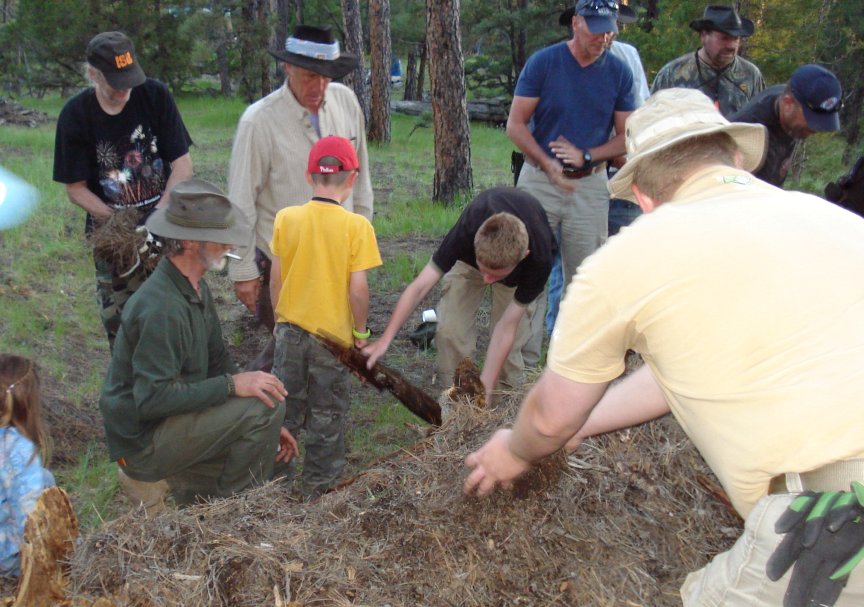 Christopher and me working with students building a shelter at Dirttime 10 in Wyoming.
Photo by Dave Tamelin. 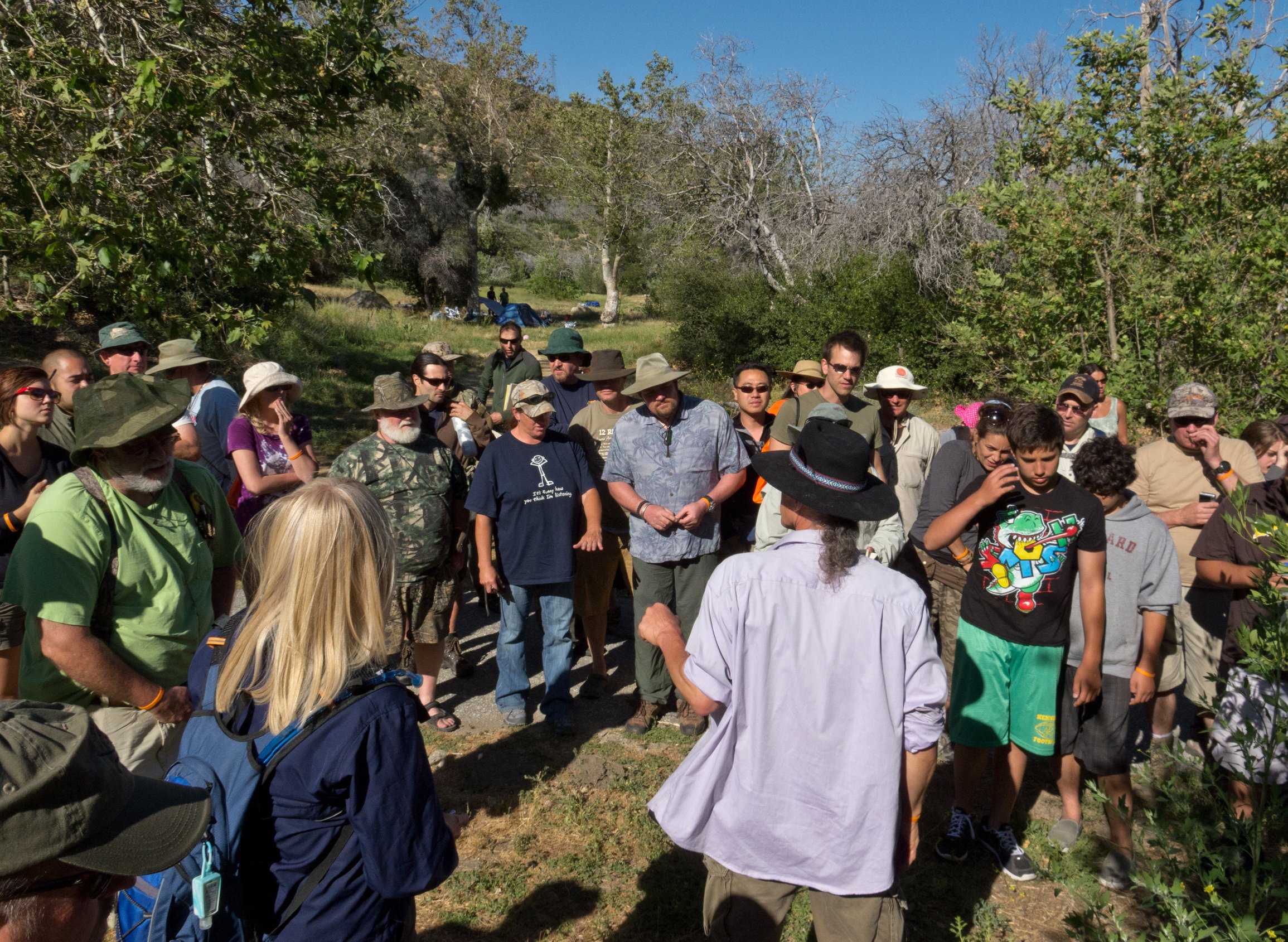 Christopher giving a plant walk at Dirttime 11 in California. Photo by Dave Tamelin.

John: What are some of your favorite skills to teach?

Christopher: Ethnobotany has always been my first love, but I really enjoy it all, especially if the students are “turned on” by the skills.

John: You also teach self-reliance skills. What are some of those areas?

Christopher: This means learning about the wild plants, how to grow your food, how to compost, store water for emergencies, collect rain water, purify water, get more out of less, use less electrical devices, develop skills for making money, Nutrition, and some firearms and martial arts skills, etc.

John: You have also done a DVD on Useful Plants of the US, and have appeared on various television shows to include Doomsday Preppers. Do you like being on camera? 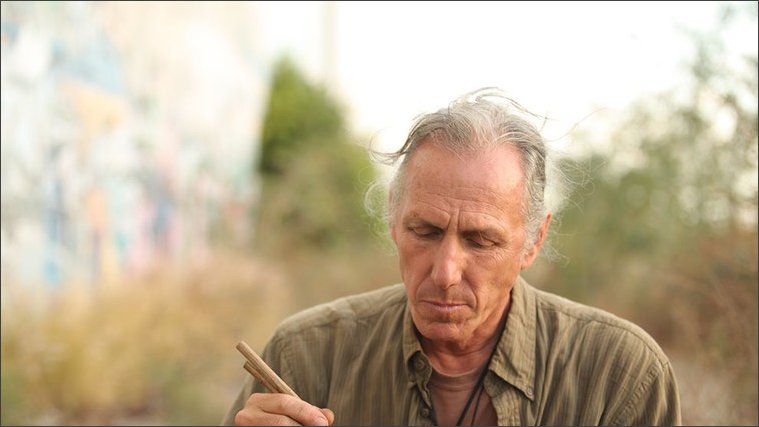 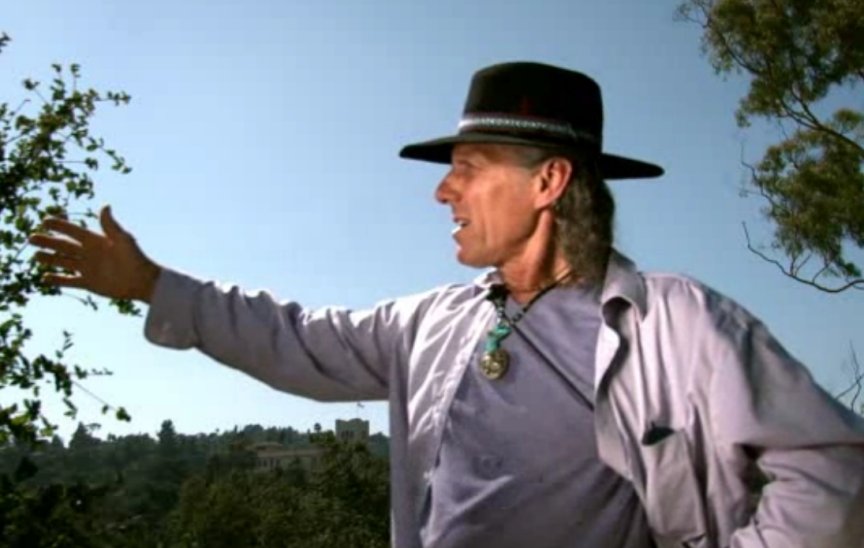 Christopher: Since I appear goofy-looking on camera, what I like is to be the medium for the message. I fully realize that when I do the TV things, I am on someone else's chessboard, fulfilling their agenda, and it often results in a garbled message. My favorite TV work was Huell Howser Visiting on local public TV and when I worked for 2 years for Fox TV on the X show.

John: What type of advice do you have for those who want to be more self-reliant?

Christopher: Of course, read all my books. Then, quit “thinking about it,” and find a way to apply the skills. Also, don't just think about yourself. Keep in mind that “Survival” is really not an individual thing. What do you hope to survive for, if your family and society and country are decimated. We need to think bigger and embrace bigger.

Well there you have it; the thoughts and insight of a legend in the survival community. I hope you enjoyed it and found it interesting. So if you are ever in the Southern California area, be sure to check out the School of Self-Reliance. It has much to offer. If not, be sure to check out his various books. Christopher Nyerges isn't one of the newcomers to survival and self-reliance training, he is one of the Founders!

We hope you enjoyed this article, and as always, Be Prepared To Survive!

Christopher Nyerges can be reached via the School of Self-reliance, Box 41834, Eagle Rock, CA 90041, or www.ChristopherNyerges.com.