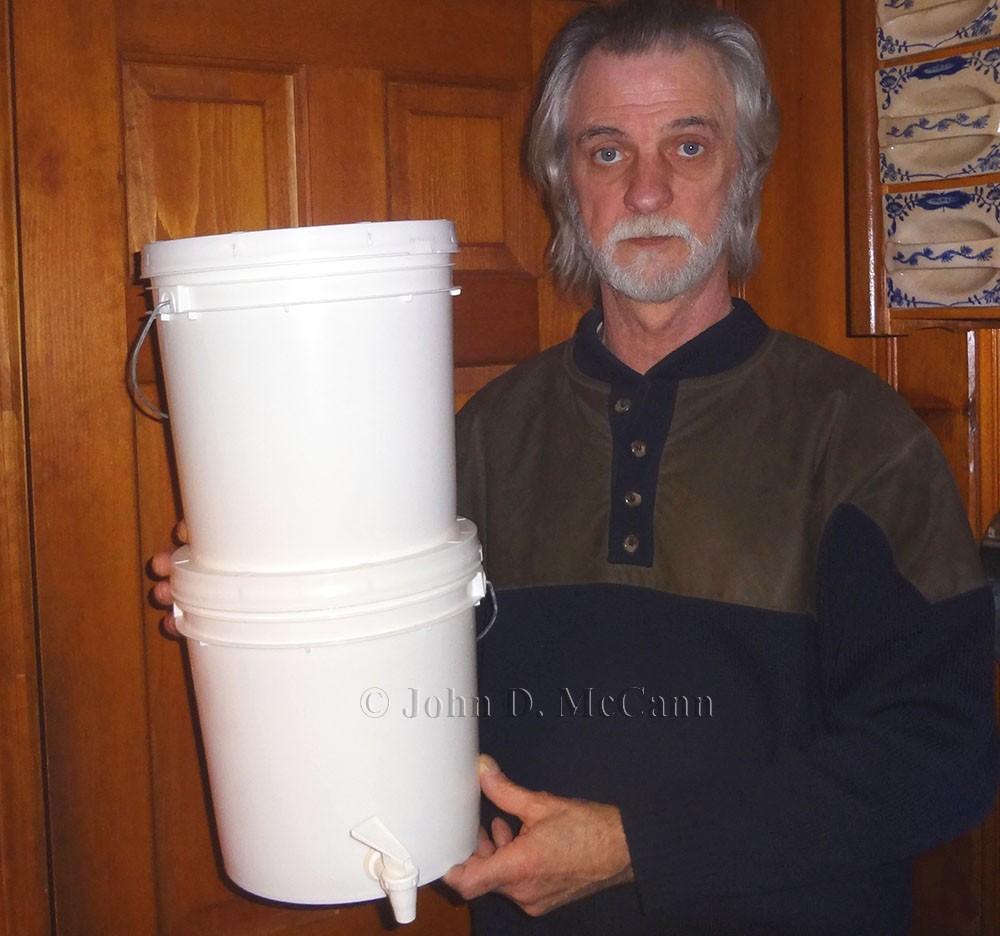 I wanted a gravity filter for filtering water in an emergency situation. There are various commercial brands available like the Katadyn and Berkey. These units cost in the $200.00 to $350.00 range and basically use ceramic filter elements in a top container which you fill with water. Gravity then draws water through the ceramic filter, whereby the filtered water is deposited in a second container under the first.

I have seen various homemade water filters constructed using two five gallon buckets, stacked on top of one another, using two to three filters in the filtering bucket. I built one and it is very useful, except that it is very large. I wanted a filter that could actually set on a counter in the kitchen.

I decided to use smaller, two gallon buckets which, when stacked, would be much smaller than two five gallon buckets. At first I looked at two gallon buckets at Home Depot made by Leaktite Corp. in Leominster, MA. The buckets had the HDPE-2 as a recycle symbol on the bottom, but they didn't say food grade. Most people don't worry about this in food buckets as they use Mylar bag liners. But this bucket was going to hold water, so I checked further.

Upon contacting Leaktite Corp., I was told unequivocally that their buckets were not "food grade" and were meant for paint and chemicals. I was told they did not recommend them for food, unless a Mylar bag was used inside. I asked about storing water in them and they said definitely not. I did some further research and apparently non food grade buckets can be made from recycled HDPE material and they use a mold release agent that can leach from the bucket into its contents. Food grade bucket use air pressure to release the bucket from the mold.

I was able to find some food grade two gallon buckets made by Plastican Inc. and they come with a certificate certifying them as being "Food Grade" and are approved under the Federal Food, Drug and Cosmetics Act, Title 21 CFR Section 177.1520, as free of animal based ingredients, as well as being free of Bisphenol A.

Next I needed a filter, and I had already purchased four Berkey Ceramic Water Filter Candles for a five gallon bucket system, so after using three for that, I had one left over. Because of the smaller bucket size, I was only going to use one filter in the center. This would be a slower gravity type filtering unit, but, again, smaller.

This the box the Berkey Ceramic water filter candle comes in.

The last this I needed was a spigot for the lower holding bucket and obtained one at Amazon.com. I was now ready to complete the project. 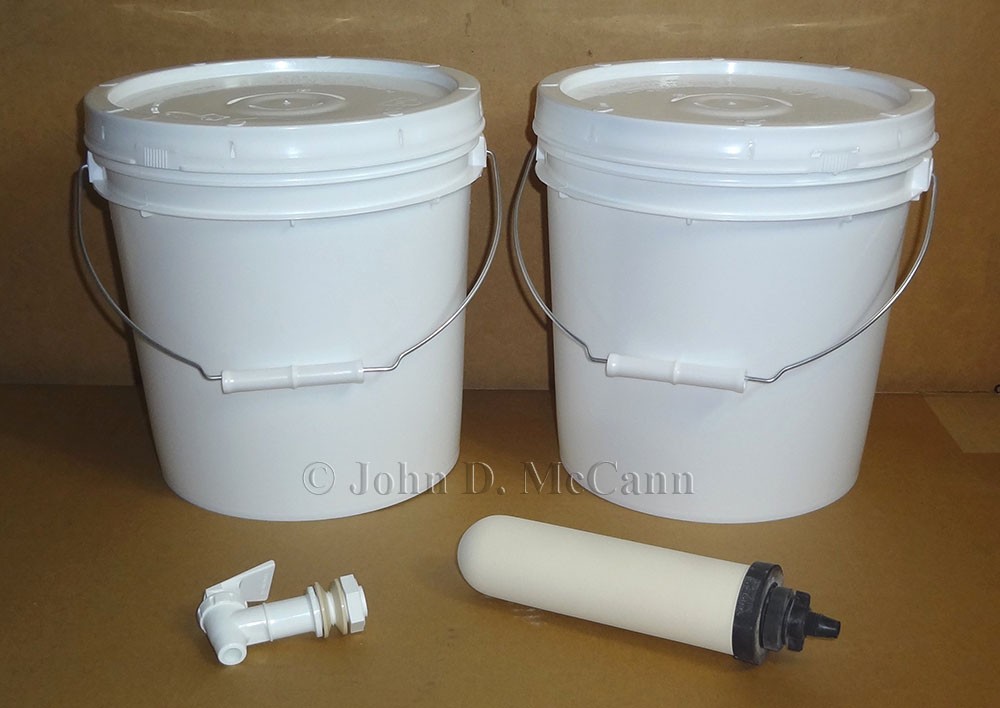 This photo shows the parts needed for the project. Two food grade two gallon buckets, one spigot,
and one ceramic water filter (I used a Berkey Candle Filter).

After washing and drying both of the new buckets, I started by mounting the spigot on the bottom side of the first bucket. For drilling holes in the plastic buckets, I used Forstner bits, as I have found they make nice holes and do not twist the plastic like a normal drill bit does. At least this is my experience.

I drilled a 3/4" hole, and the spigot simply mounted to the side using the included two rubber washers and a nut. One rubber washer on the outside, then one rubber washer and nut on the inside. I made sure, before drilling, that after the spigot was attached, it would not be lower than the bottom edge of the bucket. This would allow the bucket to set on a surface without bending or breaking the spigot. 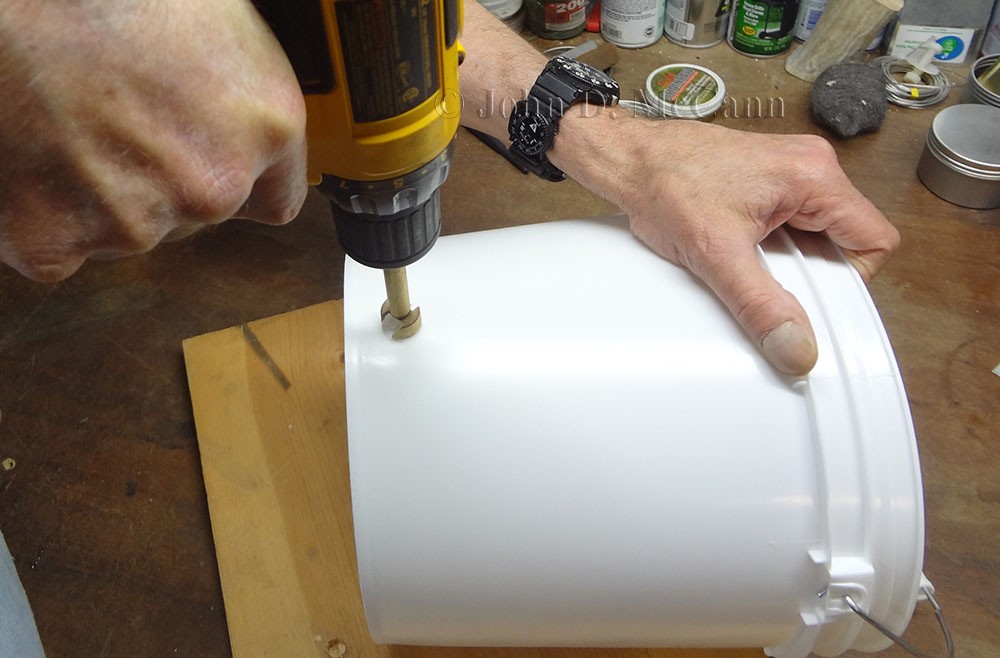 This shows the 3/4" hole being drilled for mounting the spigot to the bottom of the bucket. 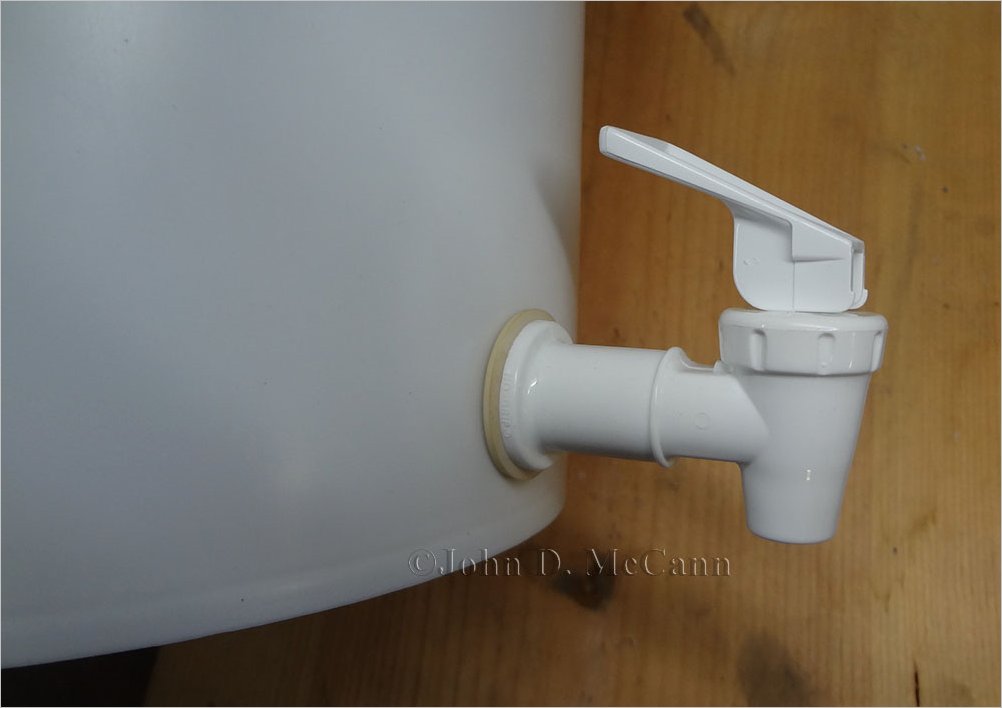 The Spigot mounted to the bottom bucket.

I now moved to the top bucket that would hold the ceramic filtering element. Being I was only using one filter element, I was going to mount it in the bottom center of the bucket. I needed a 1/2" hole in the bottom of the top bucket for the end of the filter to mount through. When the hole was drilled, the rubber gasket was placed on the end of the filter, so it would be inside the bucket, and the end was placed through the hole. The nut was then hand tightened on the outside bottom of the bucket. 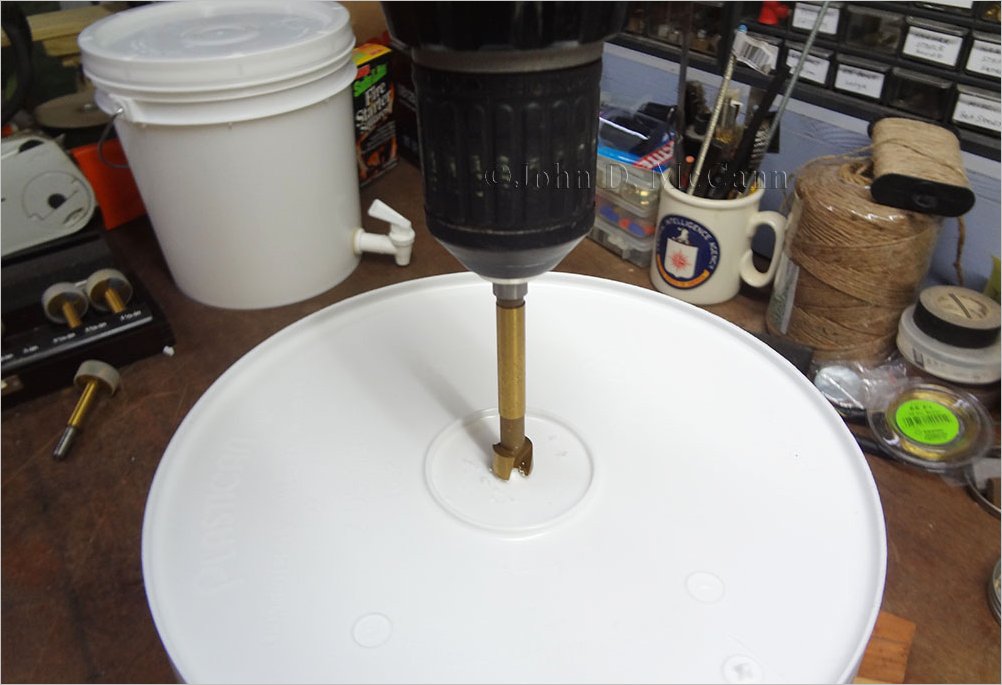 Drilling the 1/2" hole in the bottom of the top bucket for the ceramic filter. 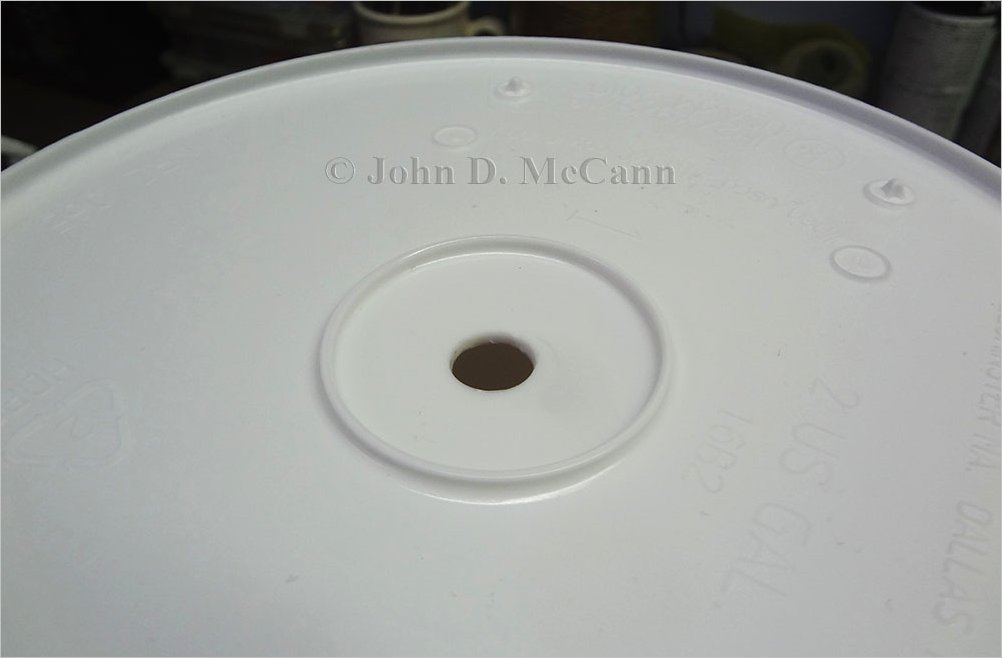 A view of the ceramic filter mounted in the center of the top bucket. 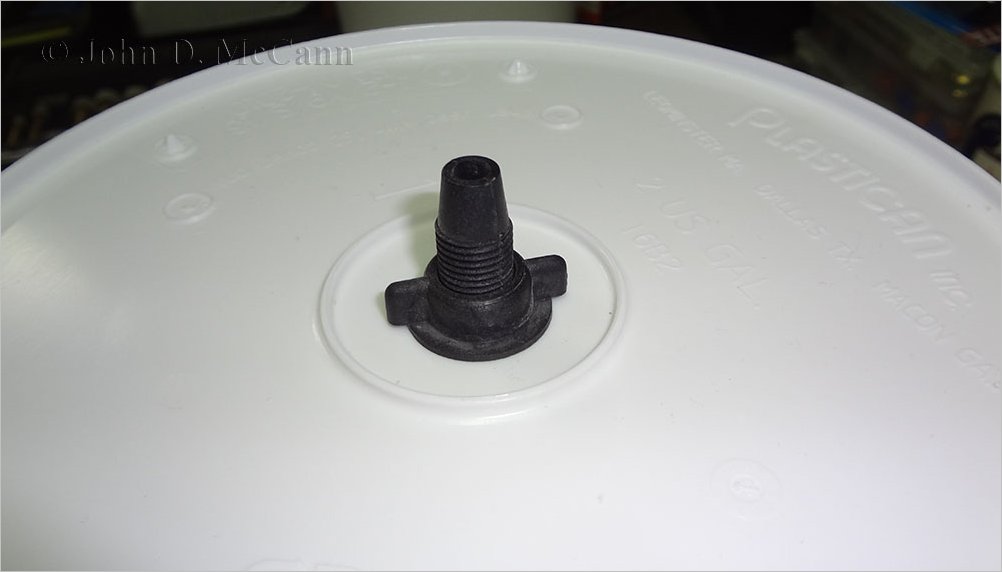 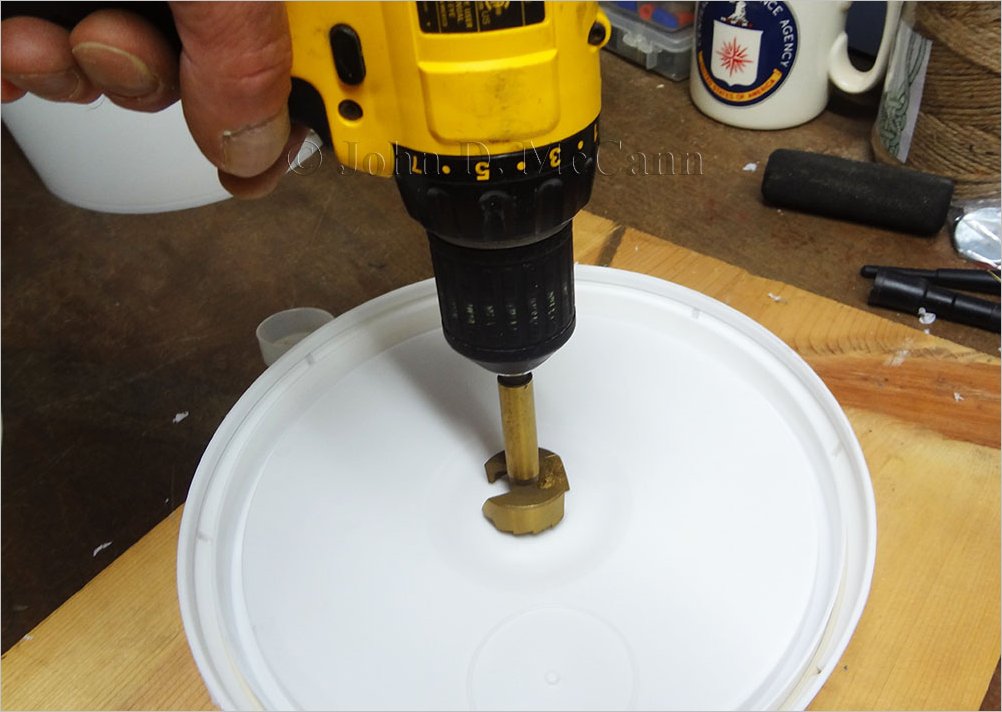 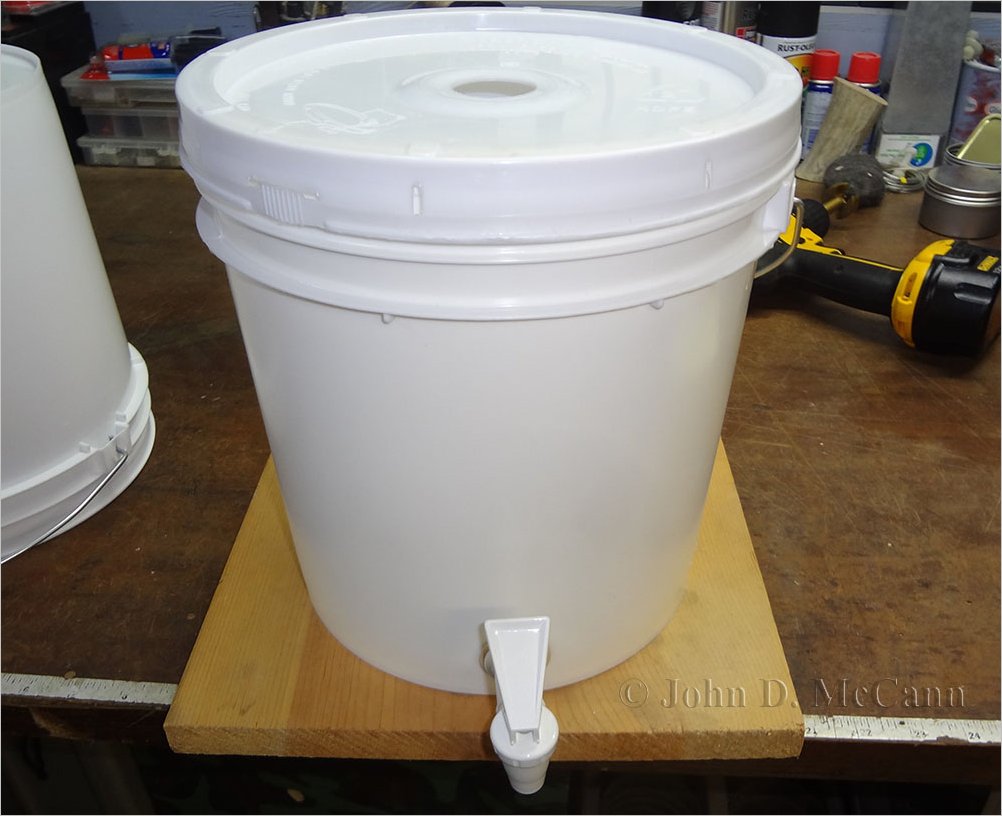 This Shows the completed bottom bucket which will collect the filtered water from the top bucket as it drips through the bottom of the ceramic filter. 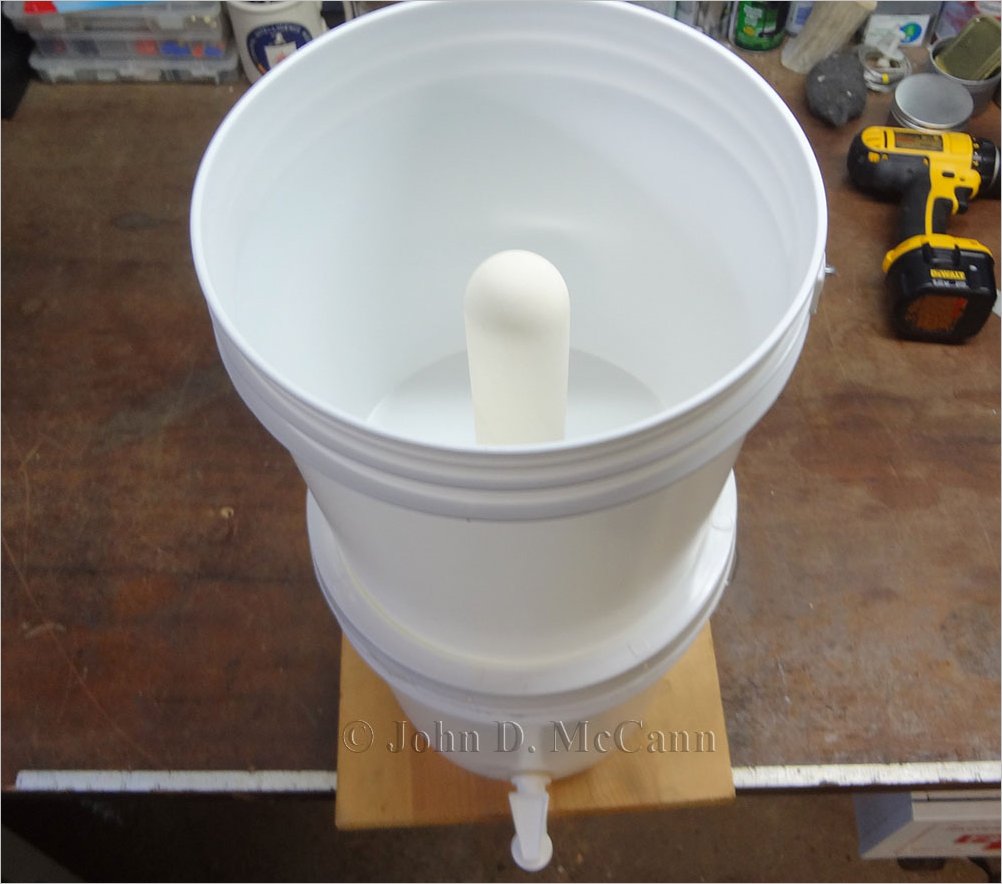 This is a view of the top filtering bucket setting on the lid of the bottom collection bucket. 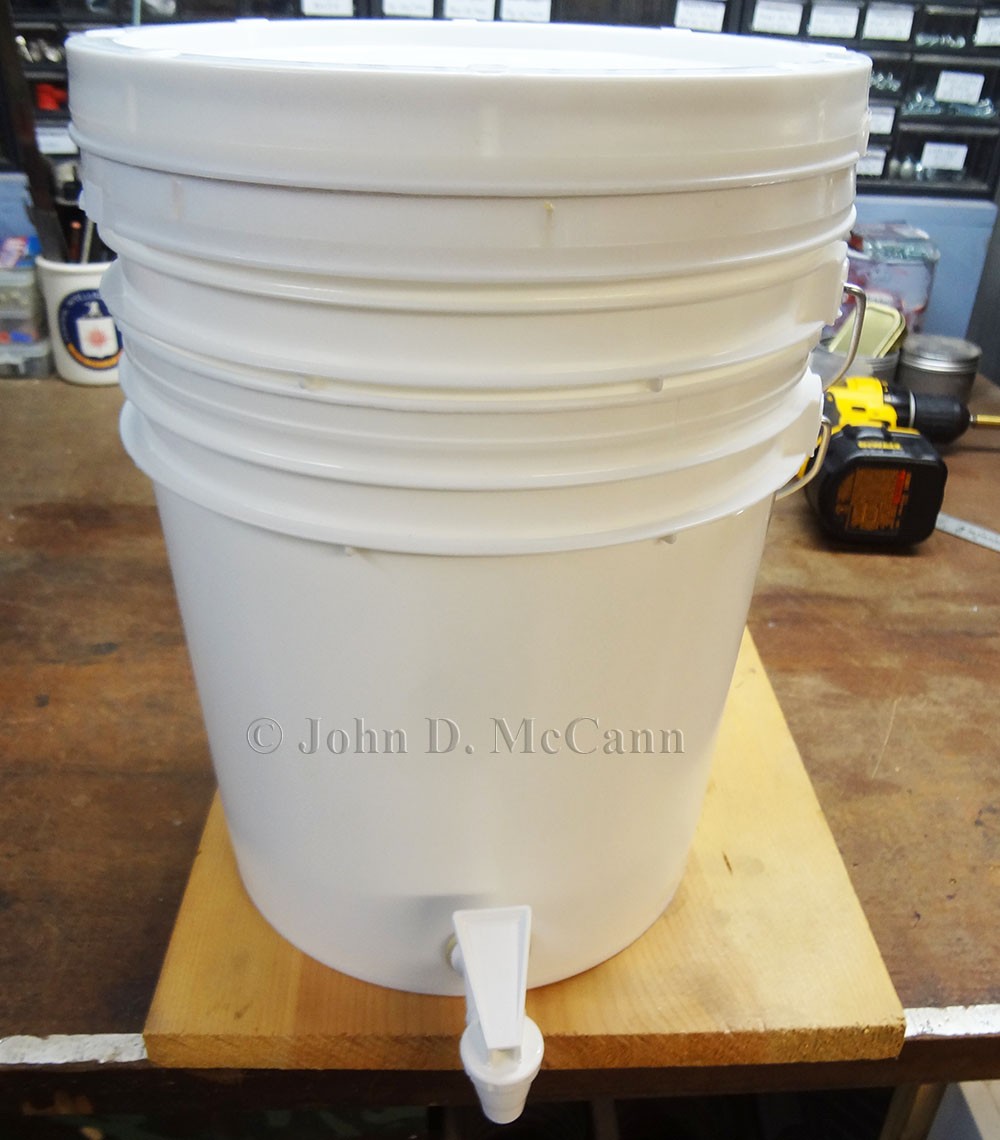 For storage, this shows how the top bucket, when the system is not in use, will store
inside of the bottom bucket. 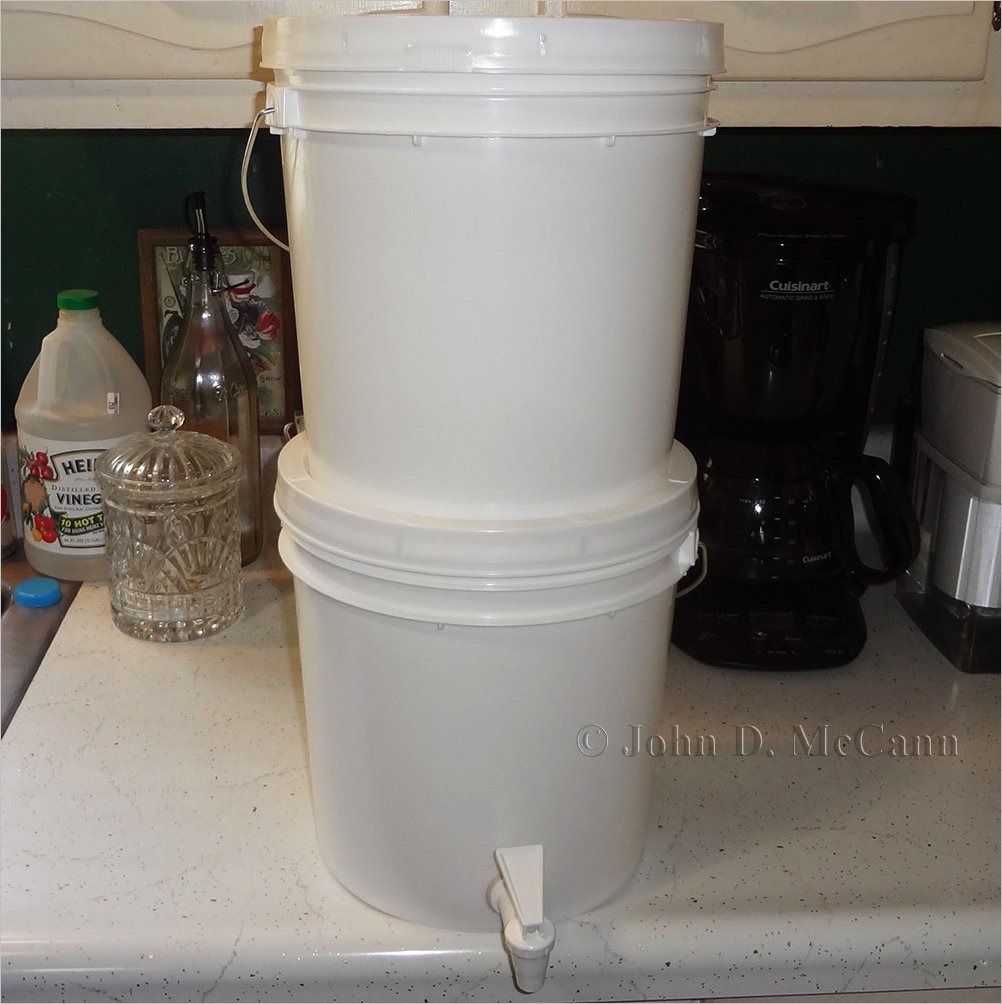 This shows the DIY Countertop Water Filter sitting on the counter in the kitchen. 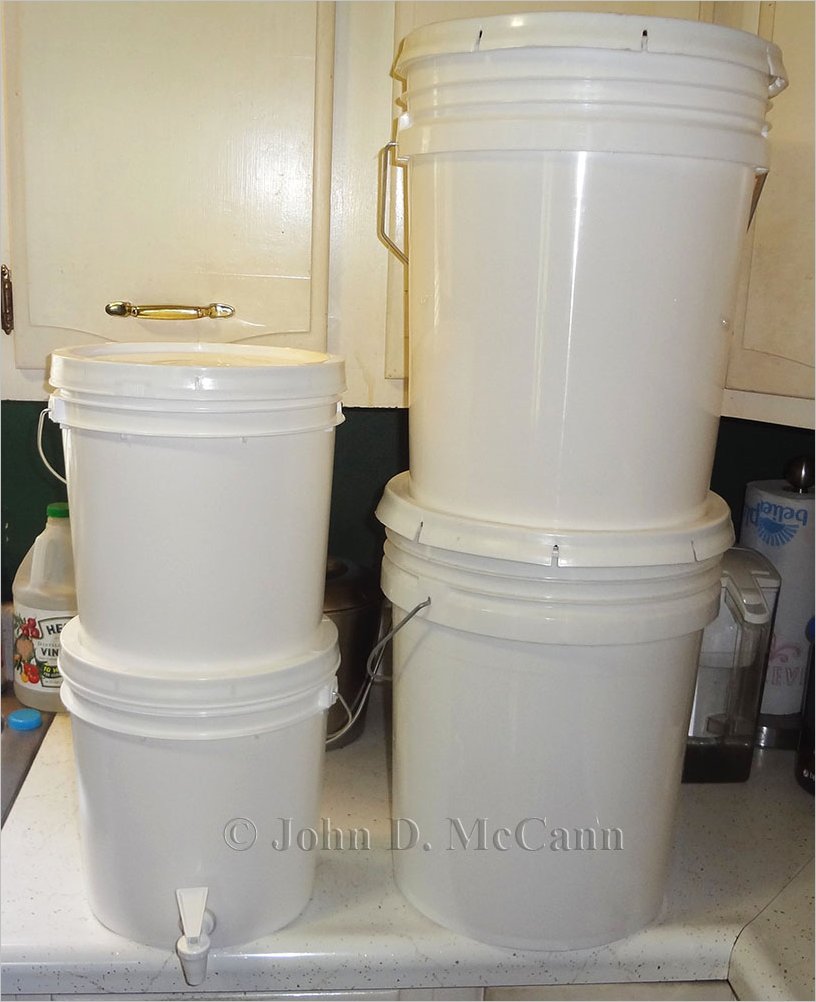 This shows a comparison of the two gallon bucket system I made on the left, to one
made in five gallon buckets. A considerable difference in size.

Well there you have it! A DIY gravity feed Countertop Water Filter for your home. This will come in handy for an Emergency Situation. Total cost for the project: Ceramic filter - $25.00, Buckets - $4.50 each for a total of $9.00, and a spigot for $3.00, for a Total Project Cost of $37.00. A lot cheaper than a commercial unit!