As an introduction, my wife, Denise, and I have been playing with solar cookers and ovens for awhile. Denise built a wooden one with a shop teacher, many years ago, when she was a Home Economics Teacher in Switzerland. The inside of the box was painted black. It worked well and the students had fun with it. We built one of the ovens from a cardboard box with the glass in the top, but it just wasn't durable. We also have two "Hot Pot" solar cookers and we really like those. If you are interested, you can see a review of the "Hot Pot" solar cooker I did here.

However, we wanted to build a solar oven that would be substantial and last for years. For our own purposes, we differentiate between a solar cooker and a solar oven as follows. A solar cooker, like the "Hot Pot" solar cooker, is subject to heat loss mechanisms because it is open to the environment. A solar oven is enclosed and insulated to help retain the heat. Of course, many people use the names interchangeably and, again, we use these different terms for our own purposes.

We have read a lot about these ovens and some say the inside should be all black. Some say it should be reflective. One scientific study said either one works. We decided we would do the bottom black to absorb the heat and the sides reflective to reflect the sun's rays around the inside.

I had an old picture frame that had a 16" x 20" piece of glass in it. It looked to be the right size for a solar oven, so I figured we would recycle and start with that. I figured I could build a frame around the glass that would become the top of the solar cooker. I picked up some 1" x 1" wood and some 3/8" quarter round. I headed for the shop and started building the first component, the top glass frame. 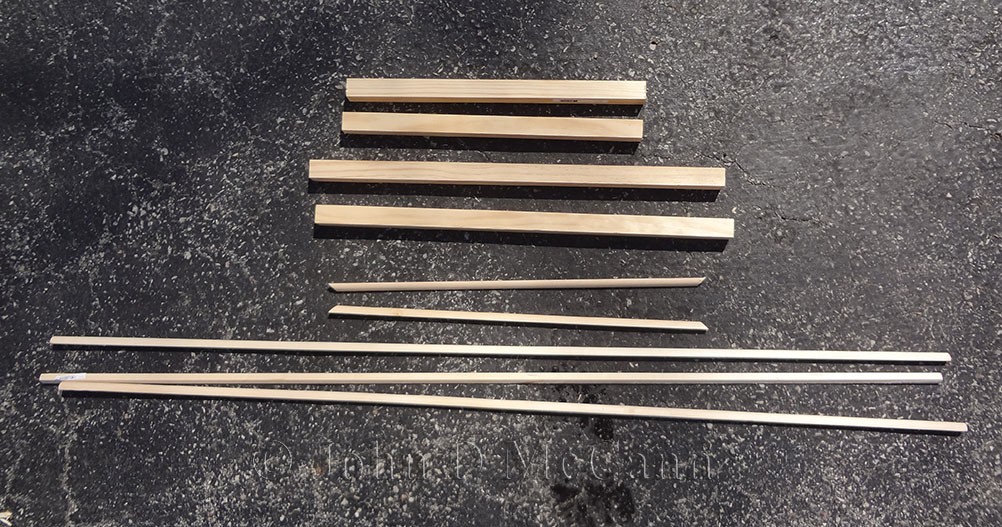 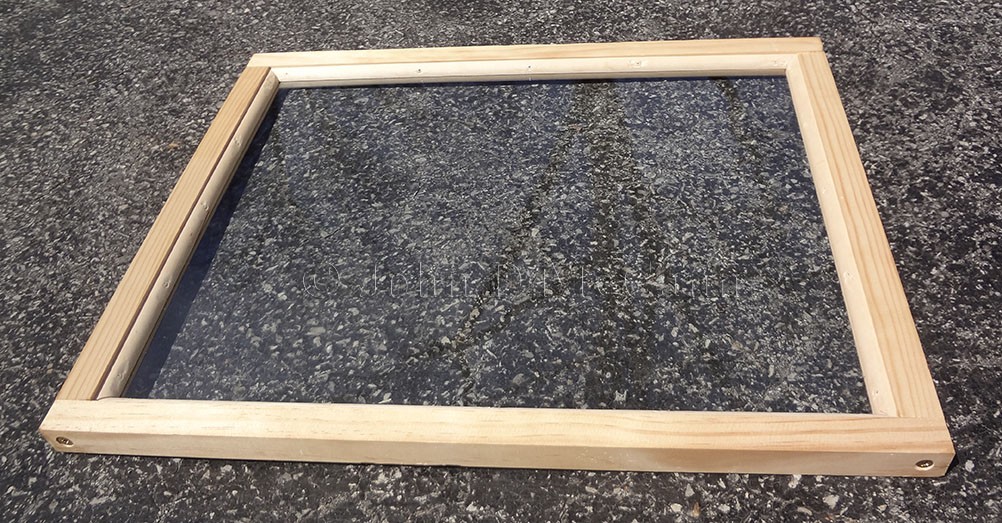 This is a view of the completed frame for the glass.

Now that we had a glass frame, we needed to design the rest of the oven around it. We originally figured the box should be about 4" high in the front, and 12" in the back. These dimensions were determined by holding the glass frame in various angles and decided on the above - not very scientific, but it worked for us. We knew we were going to add a double bottom and 1/2" insulation all around the inside, so we added an inch to the height to help compensate for the loss in the bottom. We settled on 5" high in the front and 13" in the back. 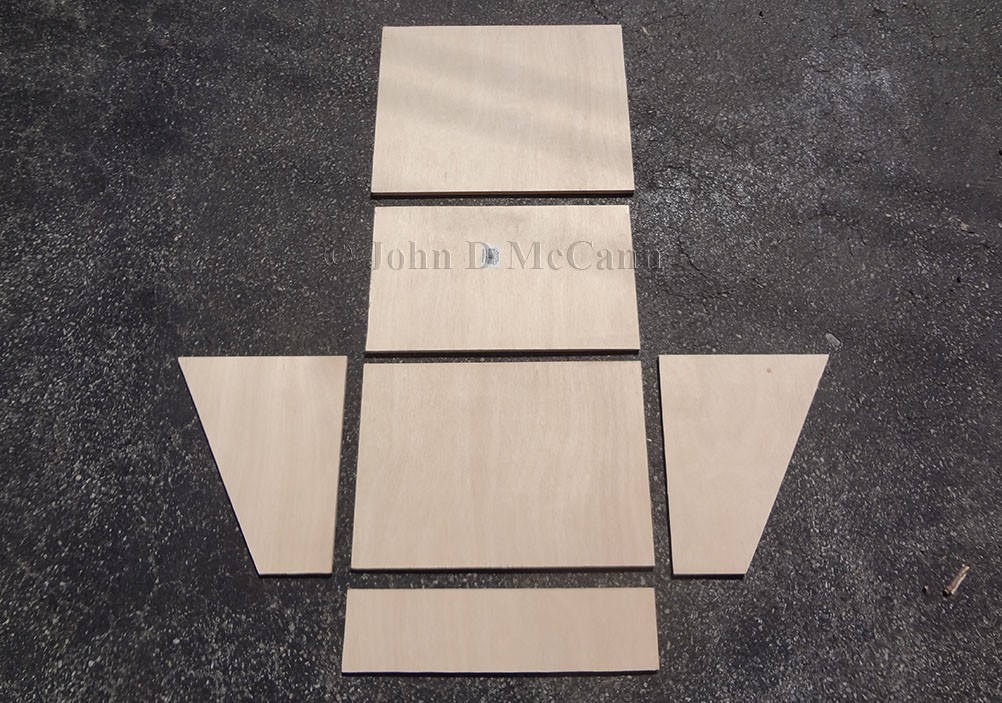 The initial cutting of the pieces for the box. It should be noted that two bottoms were cut as there would be a double bottom in the completed oven. 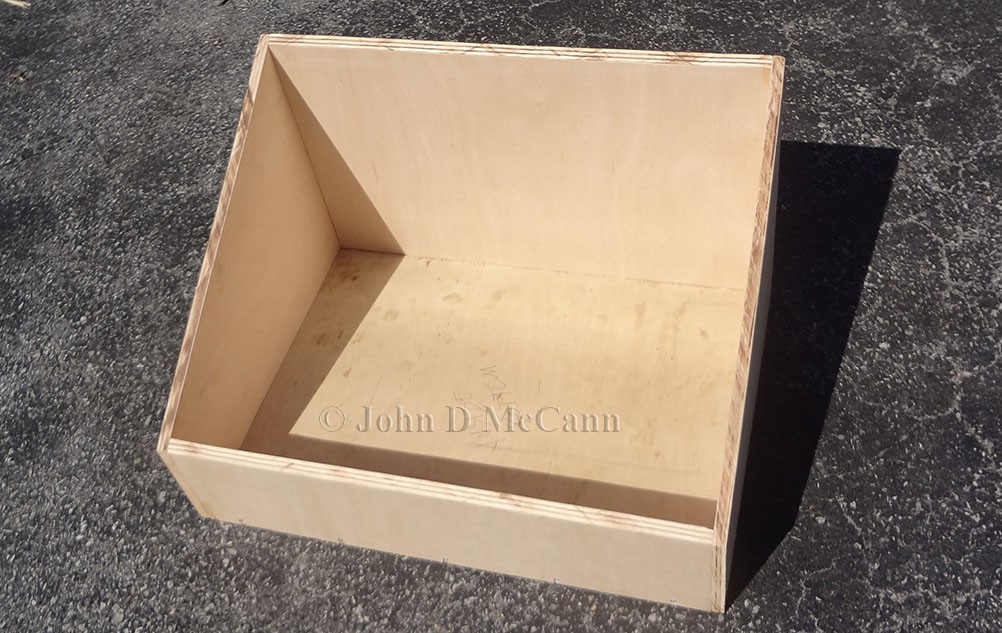 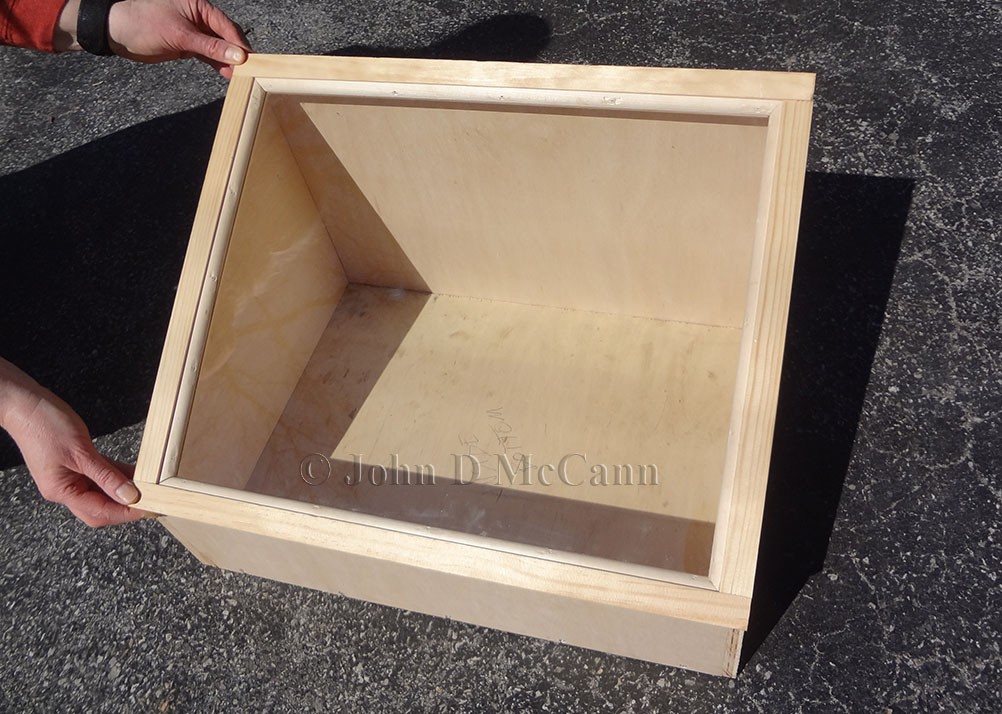 Here we are checking the fit of the window to the slanted top and it fit great.

Upon completion of the basic box, I needed to add insulation to the bottom, but wanted to add some pieces of wood for the second raised floor to be attached to, and to keep it from compressing the insulation. 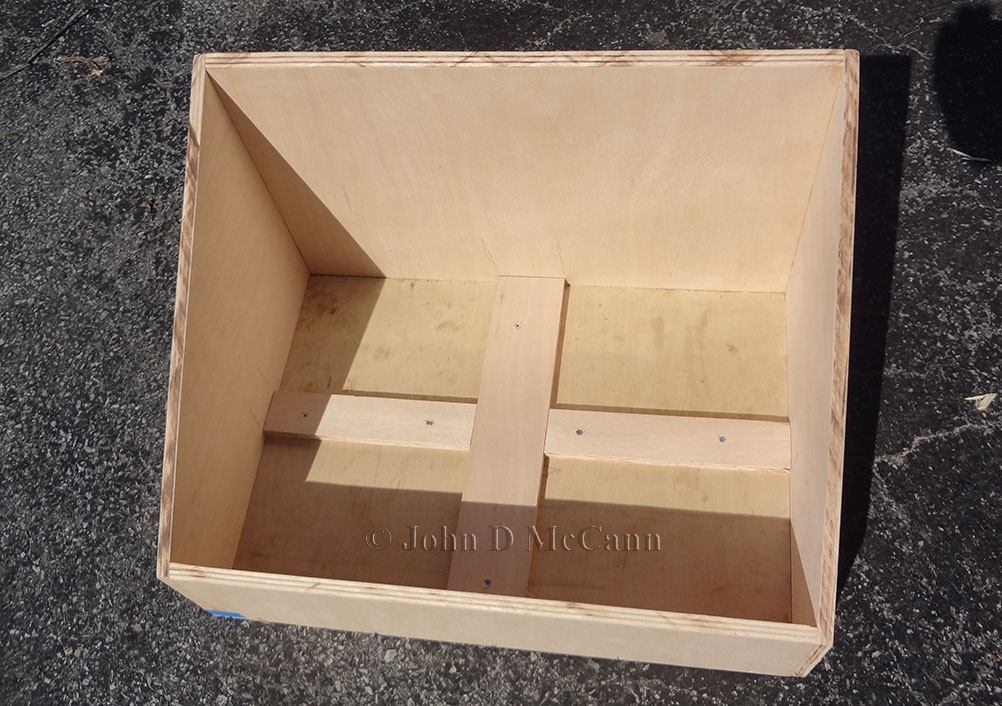 This is the spacer and connection point for the second floor.

At this point Denise was starting to cut the insulation pieces for the inside walls and bottom so I took the opportunity to start painting the box with some left over paint I had from some bird houses I built. I had also sprayed two coats of High Heat black paint, used for grills and wood stoves, on the inside bottom piece of wood. 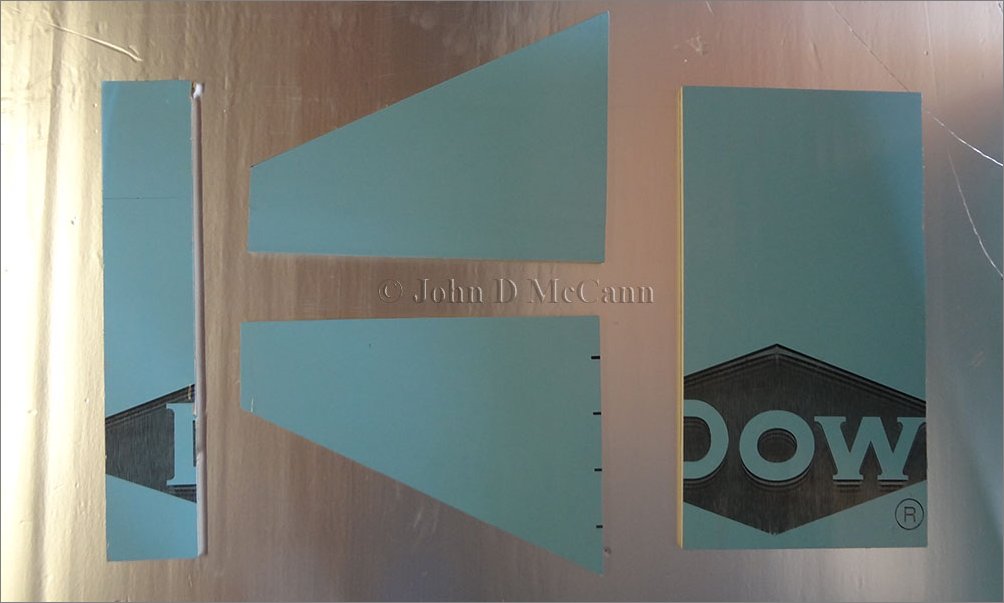 These are the inside 1/2" insulation pieces cut to size. 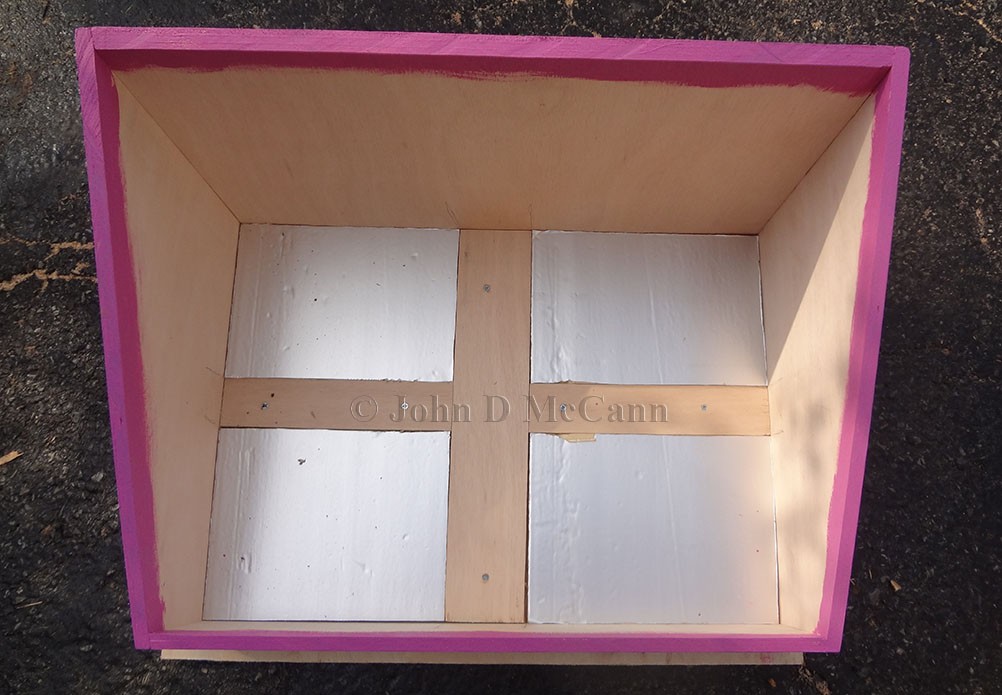 1/2" insulation pieces cut and inserted in  the bottom. 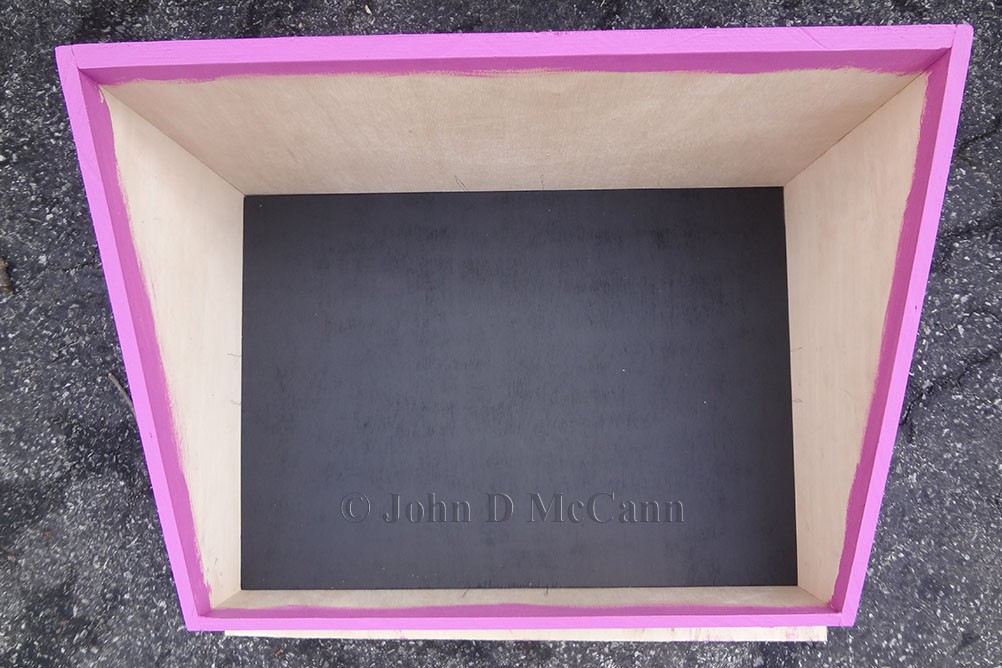 The black bottom inserted over the insulation.

After Denise cut the insulation pieces for the sides, she had to cover them with Mylar material. We had a roll of Mylar I purchased years ago for making signal mirrors. She used spray adhesive, leaving material all around. She then trimmed the sides and bottom and rolled the top end of the Mylar material over the insulation and glued it on the back. This provided a nice shiny and finished surface on tops of the side pieces. 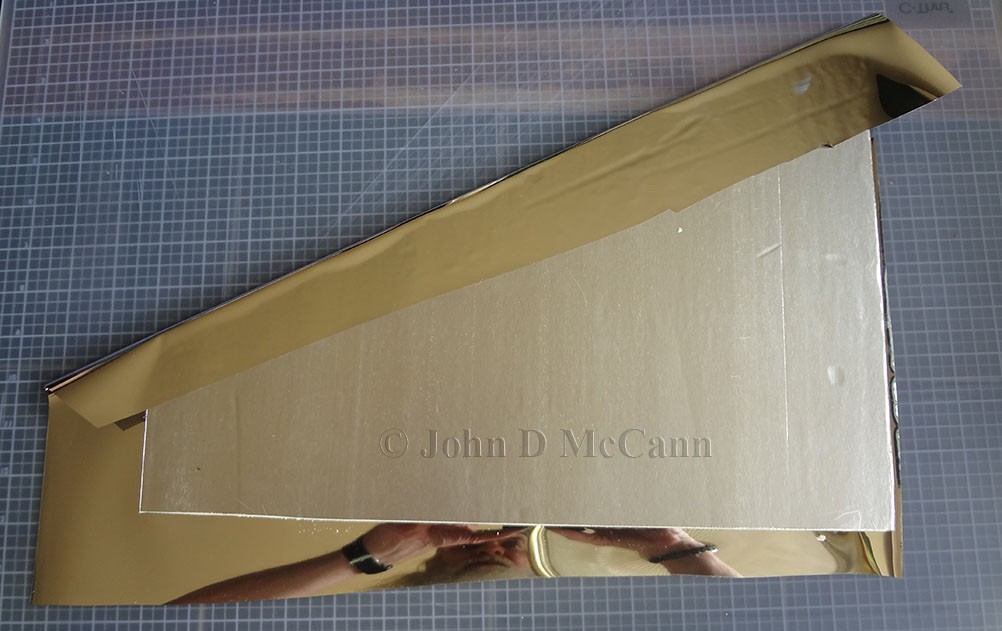 Mylar material glued to insulation pieces, then trimmed. The top has been rolled over the top and glued to the
back side to provide a finished edge at top. 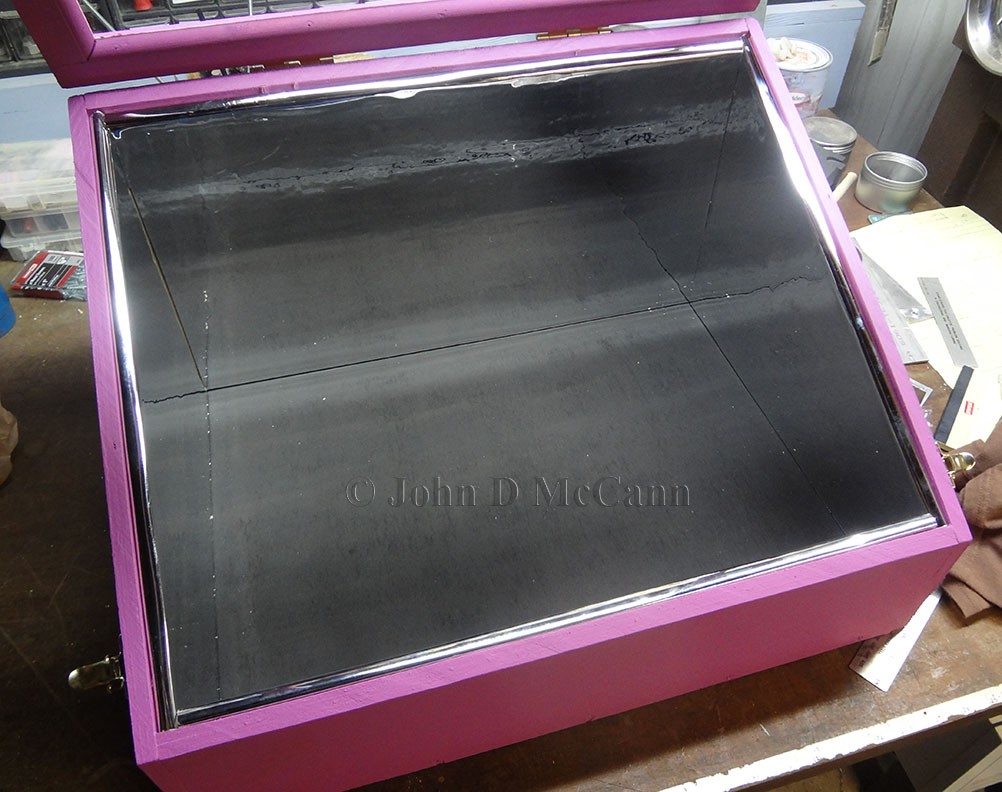 The four inside insulation pieces have been inserted in the oven box.

Now that the basic box was completed the top piece of wood, 18" x 22", which would be the lid and hold the mirror on the underside, was painted. A piece of 1/8" Plexiglas mirror was purchased, as we felt it would be much lighter than glass, and obviously safer. We would attach the mirror to the lid using double sided carpet tape, which we know is very strong. 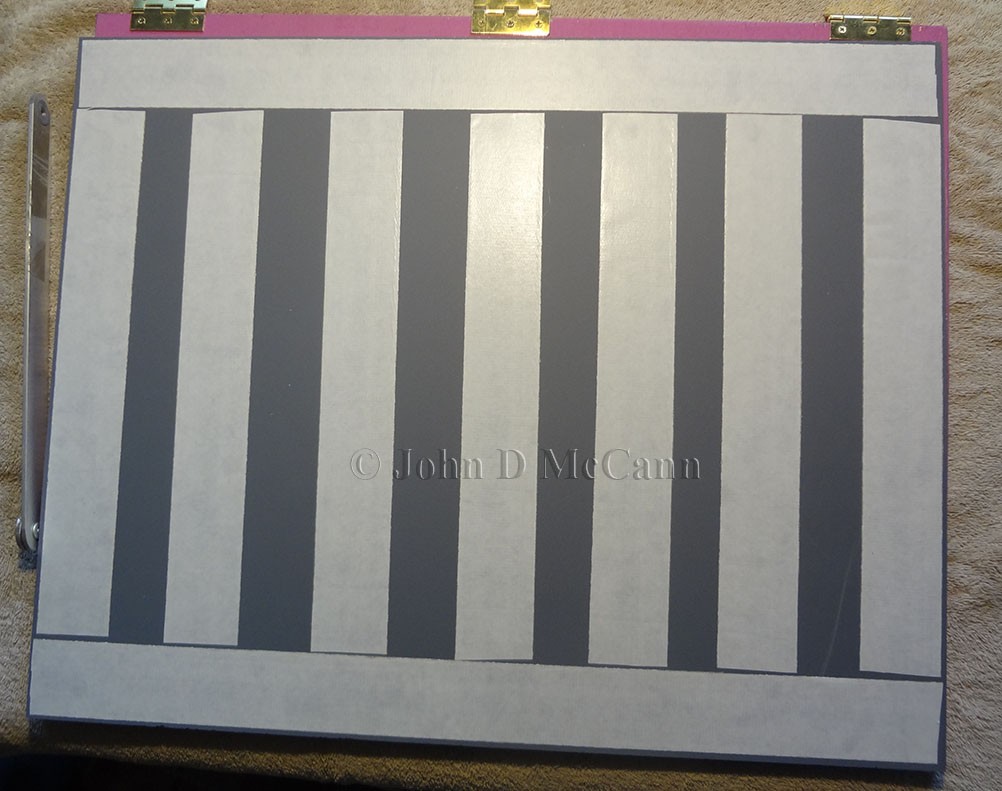 This is a view of the carpet tape being placed on the back side of the Plexiglas mirror. 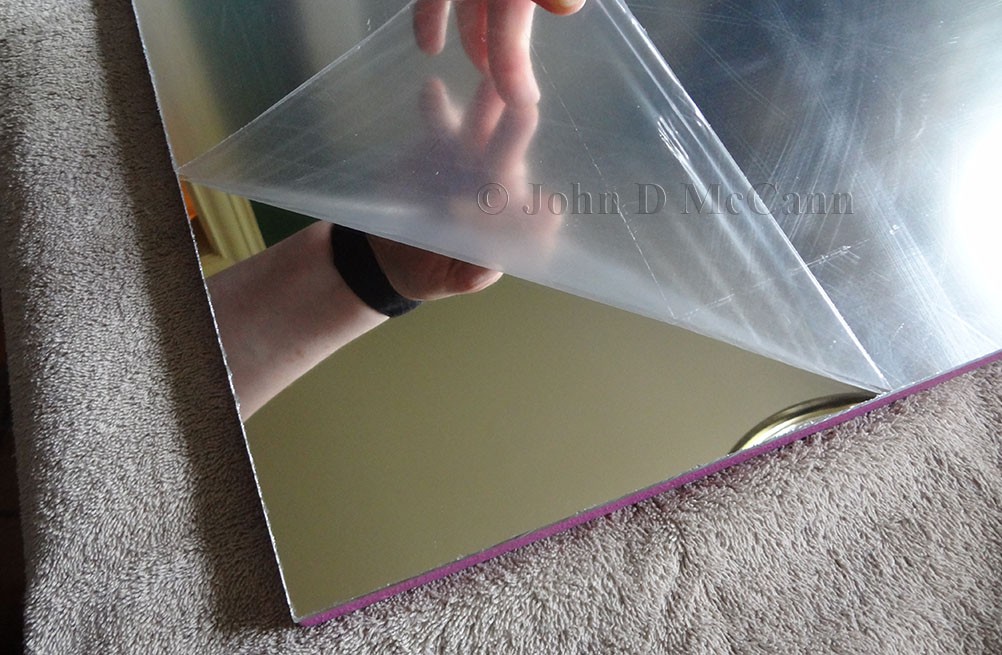 Once the mirror was attached to the lid, the protective film was removed. 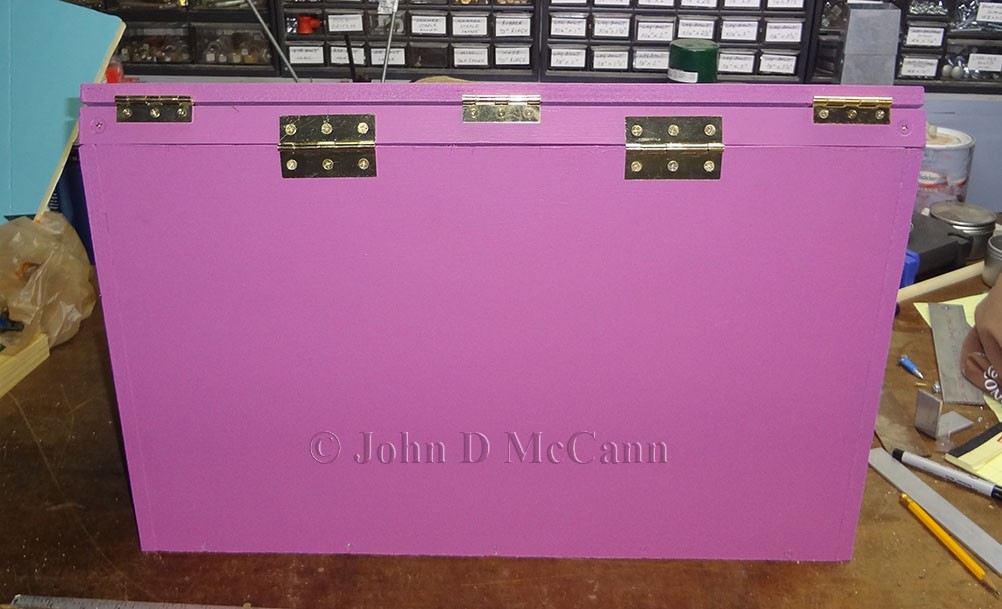 This shows the hinges for the glass lid and the mirrored top. 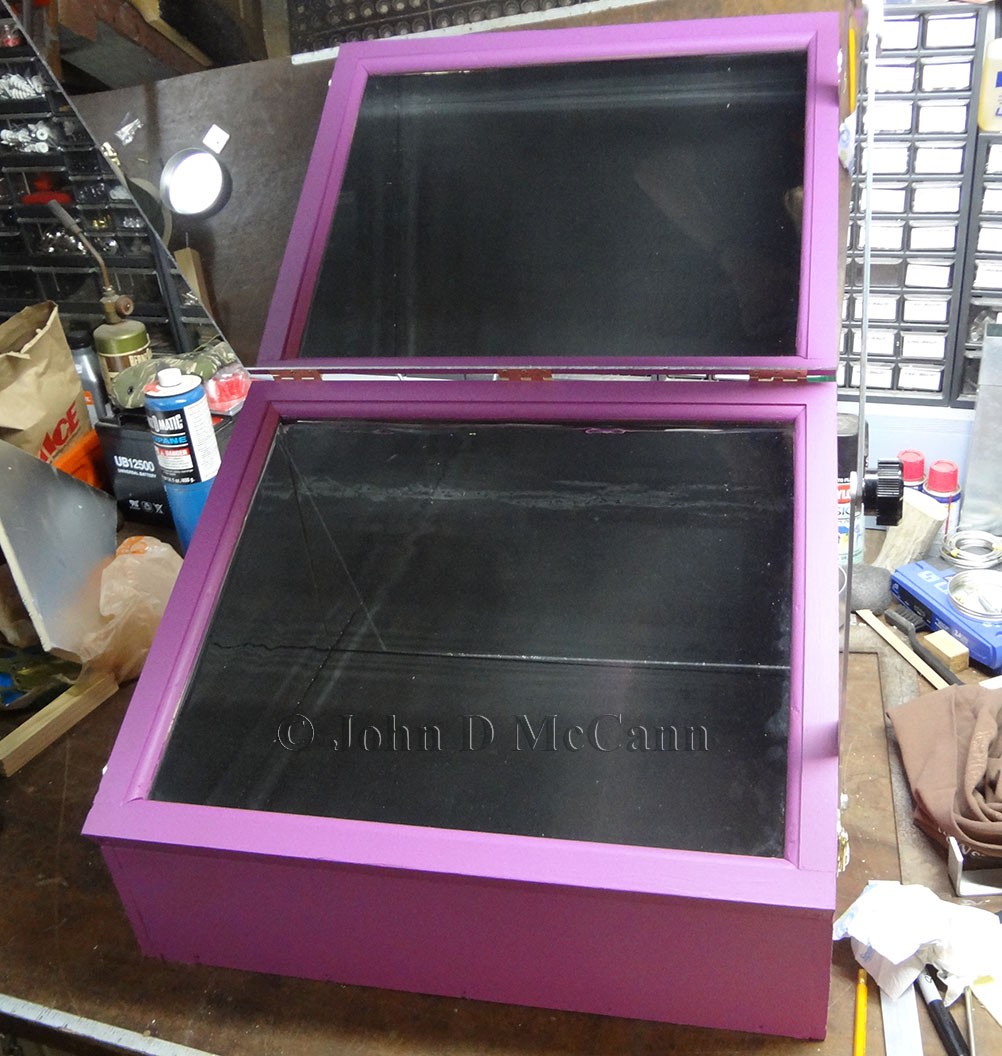 This shows the mirror lid attached in an open position.

Latches were attached to the glass frame and oven box, which would hold the glass lid down tight. Now for the arm to hold the mirrored lid.

The most difficult part of a project can often be the smallest part. I had to design something that would allow us to open, and position, the mirrored lid at any angle in order to obtain the best sun angle, and have it stay there. I will admit I spent quite a few hours designing, and rejecting ideas, until I came up with one that I liked.

I wanted the adjustment arm to fold in a manner where it would stay attached to the oven box when not in use, but pivot up into position for supporting the lid. I had some old 1" x 1/8" aluminum stock laying around and used that as the support arm. I knew that each piece could be no longer that 12", or when it was in the down position, it would stick out past the side of the box. But using two pieces, and rotating them on a pivot point it would provide two feet in height, enough to hold the lid straight up, or anywhere in between.

The bottom arm could attach to the oven box using a lag bolt as the pivot point. The top piece would need a custom bracket which I fashioned out of the same 1" x 1/8" aluminum stock. For the pivot I used a Chicago screw. The center pivot would be the initial problem. I found an old knob from one of my old spectrum analyzers which had a 1/4 - 20 thread, which is what I was looking for. The center end of the top arm I drilled a hole that would allow the 1/4 20 thread to pass through. The center end of the bottom bracket was drilled and tapped for 1/4 - 20 threads. I passed the knob bolt through the outside top arm and screwed it to the inside bottom arm. The picture will show this better. 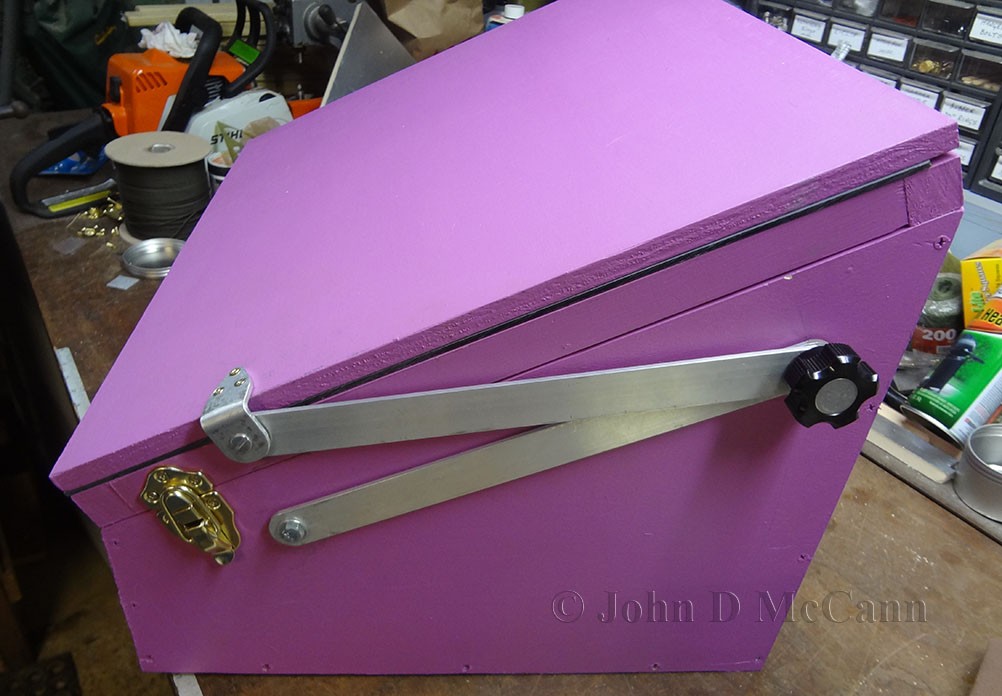 This shows the side latches and adjustment arm for holding up the mirrored lid.

Well that was the completion of the project and it was time to test it. The following day it rained all day, and on the next day, April 17th, we found it had snowed overnight. So much for "Spring is here."

The ambient temperature was 32 degrees, but I said, let's test it, and Denise agreed. The snow was melting pretty fast as the temperature was finally up to 34 degrees. We set it up on a pan, to get it up off the ground, added a black pot (you always use black pots in solar ovens) with four cups of water (we were going to make freeze dried meals for lunch), added an oven thermometer and waited. 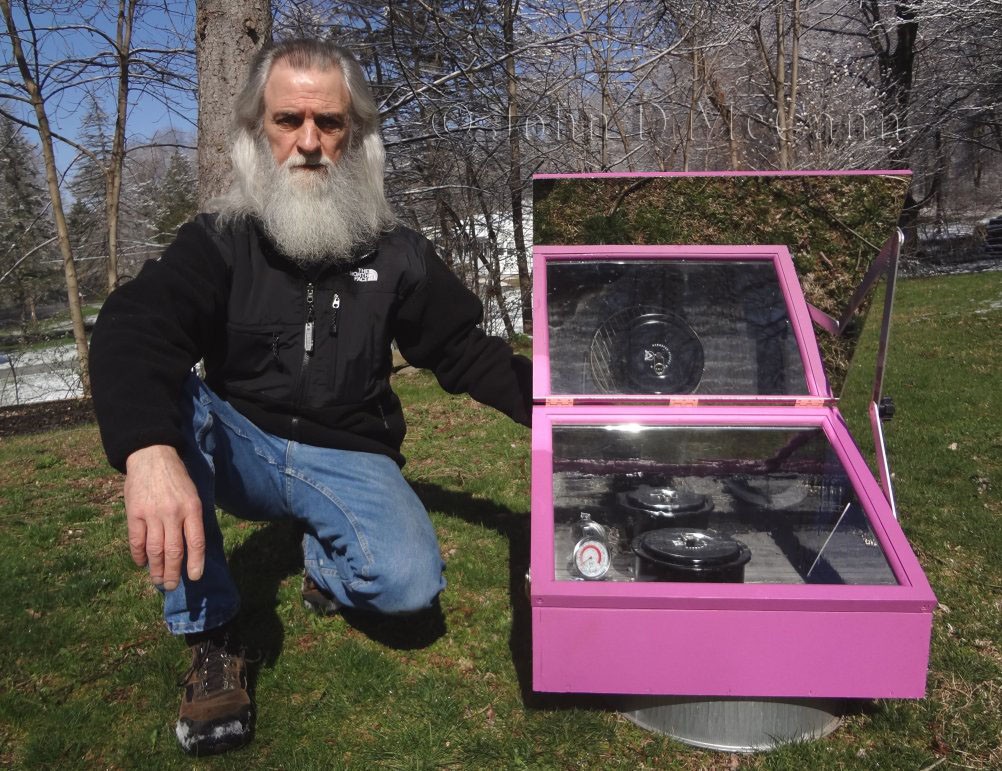 This shows me next to the solar oven set-up for a test run. 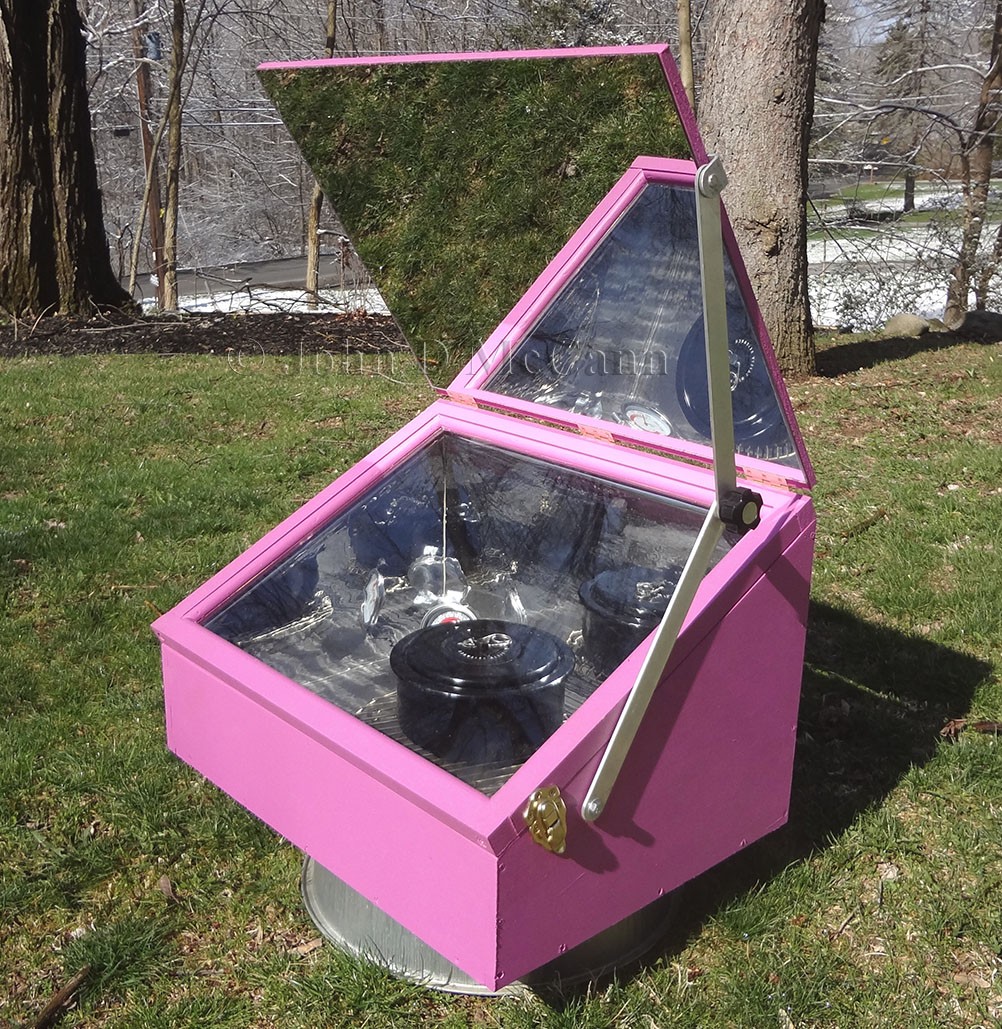 This a view of the right side with the mirror positioned for the sun. 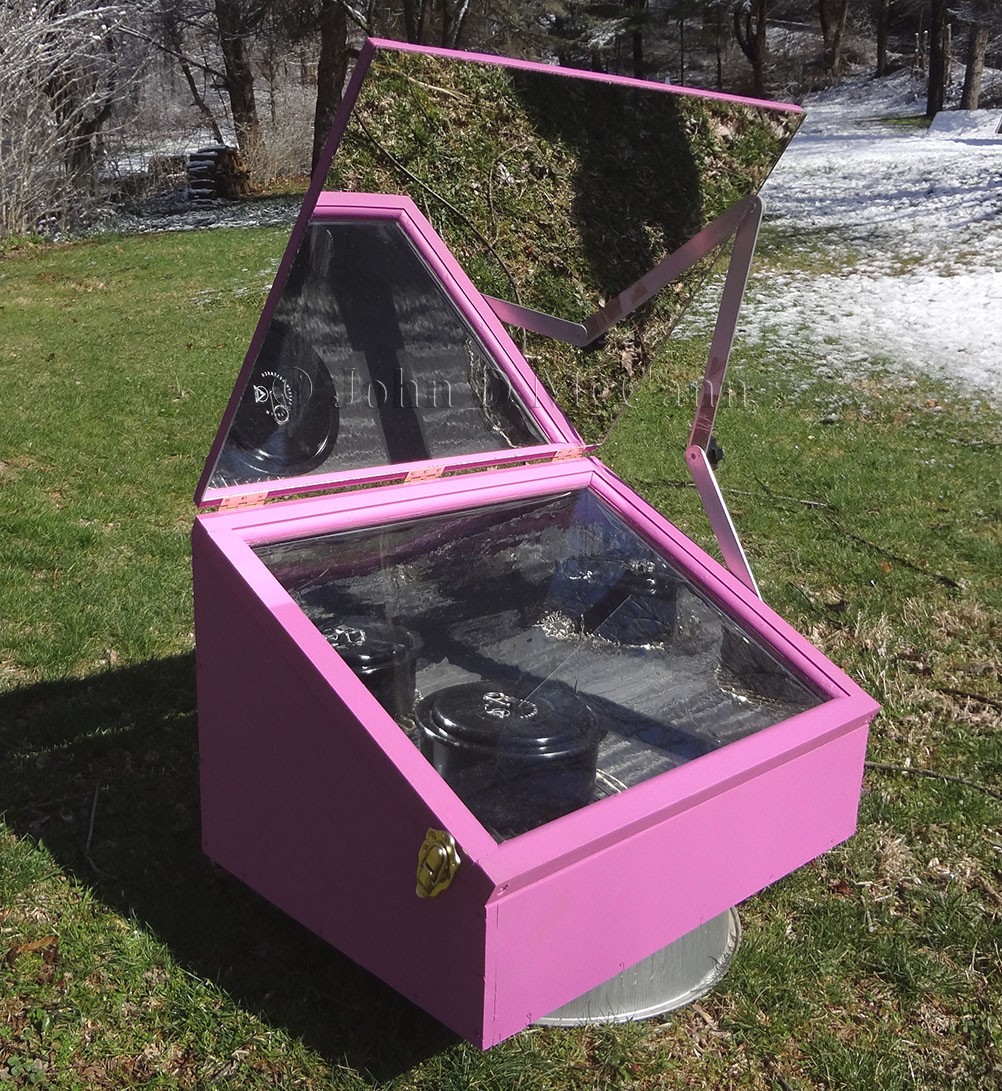 This a view of the left side. 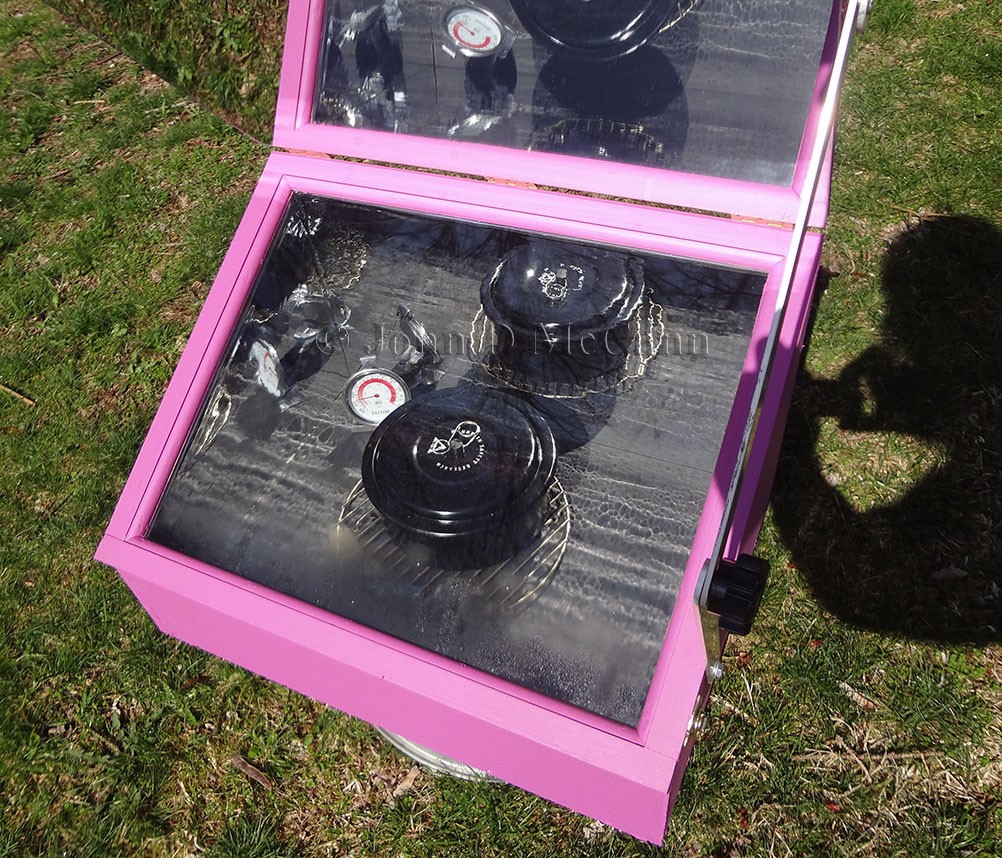 A view inside the oven showing the black pot on a cookie drying rack and thermometer.

The first thing you will learn when using solar cookers or ovens is that you don't wait until you want to eat to use them. They take much longer to heat than a conventional stove or oven, so start early. As I indicated, it was cold out so we set the oven out at 10:00 AM and by 10:15 AM the oven was at 150 degrees. At 10:45 AM the temperature was at 175 degrees. At 11:30 the temperature had only increased to 180 degrees. Because of the cold ambient temperature outside, I wasn't sure the temperature in the oven would go much higher.

At 12:15 we checked the water, and it was hot and slightly bubbling, but not boiling (it never does come to a rolling boil in a solar oven). At that time we added two freeze dried packages of Alpine Air Hawaiian Style Chicken Teriyaki. At 1:00 PM is was ready to eat. 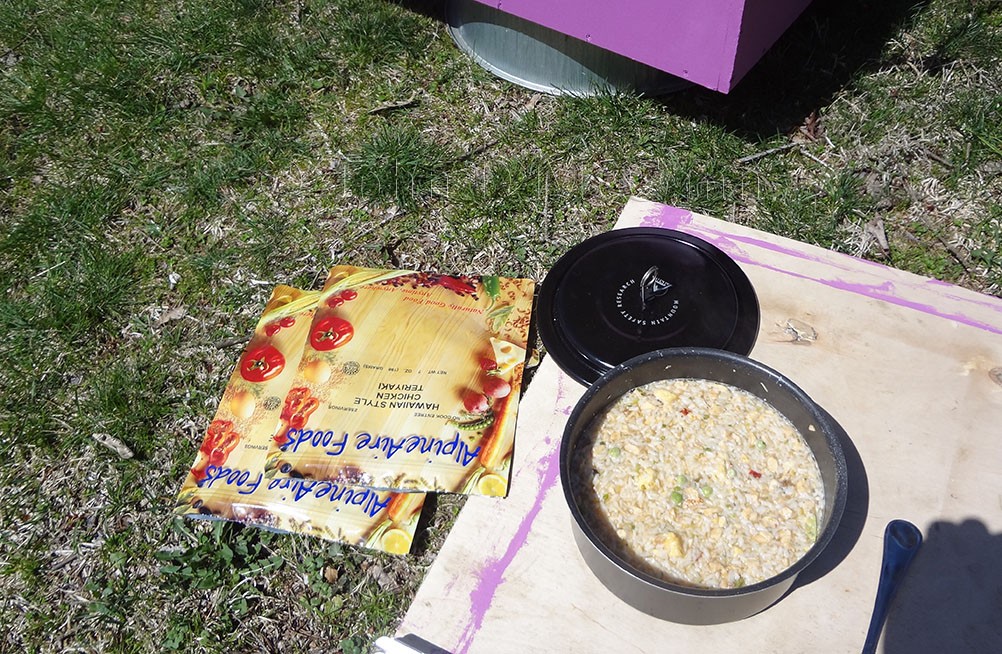 Freeze dried meals being added to the hot water, then placed back in the oven. 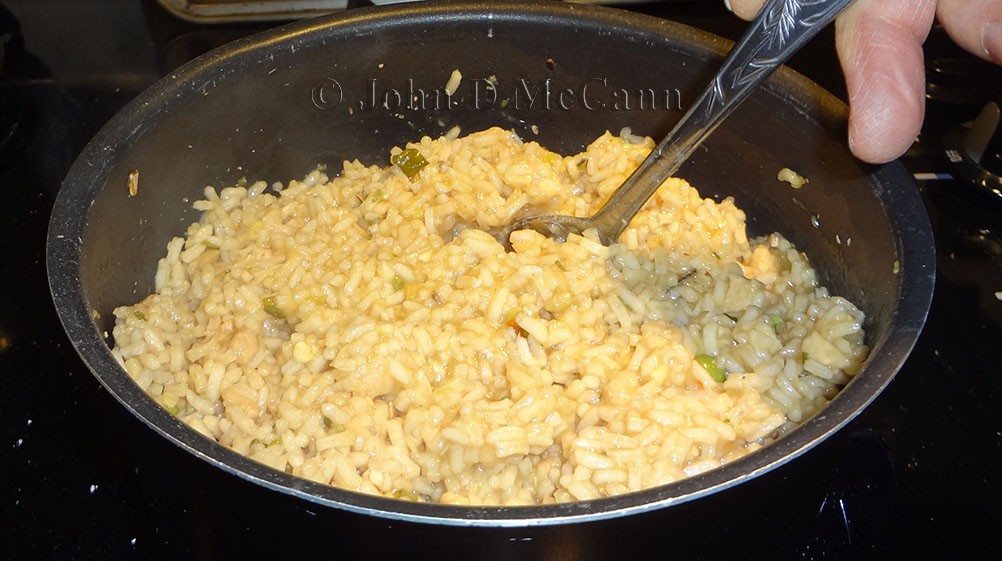 Lunch is ready to eat.

The initial test went well and we look forward to using this oven this summer and will be both, cooking, and baking in it. It definitely saves on using nonrenewable resources to cook and adds to being self-reliant.