To make a long story short, one the batteries did go bad and I set it aside in order to do the modifications. Well, through procrastination, I never got to the project.  This weekend I was building a new table for the back porch and the battery in the Dewalt Cordless Drill went dead, so I went to the shop to get one of the spares, and of course, none of them had been put on the charger so they were all dead. I figured this might be a good time to modify that old dead battery case.

Upon opening the battery case, I found that there was a battery pack that was molded to fit inside the case, and it had a “standoff” with prongs that inserted upwards into the cordless drill. 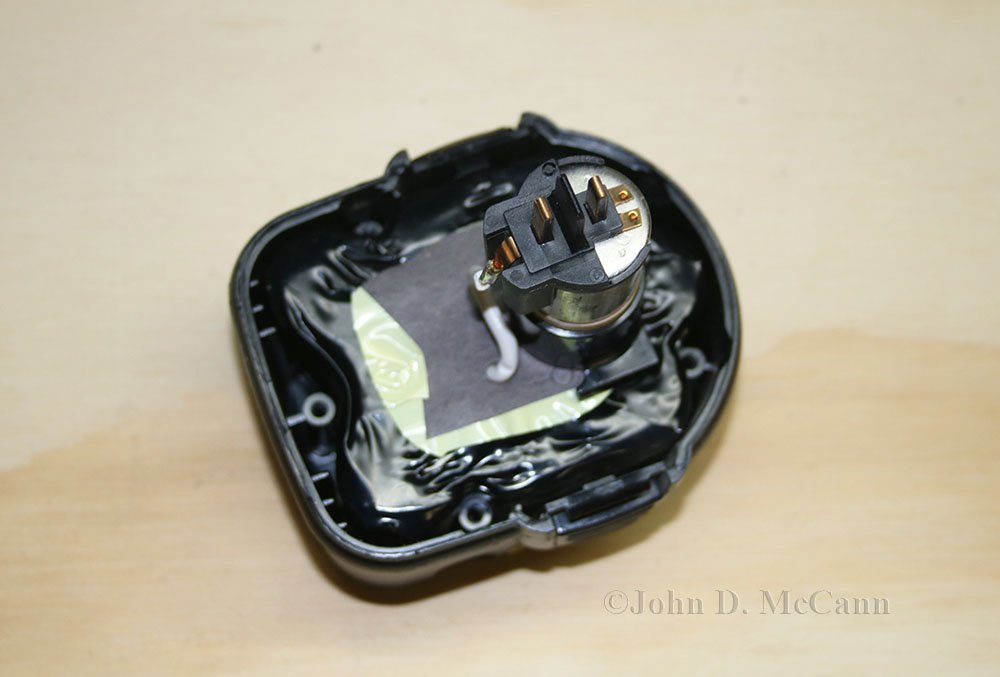 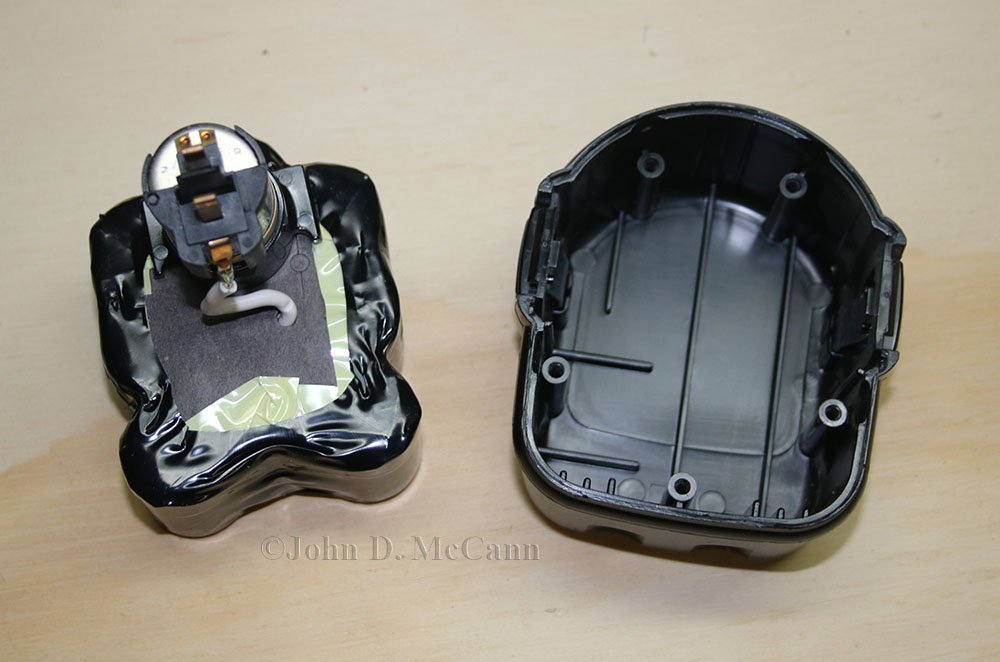 Upon examination, and after various ideas, I decided that I would replicate the original battery pack size with a piece of wood, then mount the standoff to the top and wire it in place.  The battery pack was 1-3/8” tall, and in order to mount the “standoff” with prongs on the top, the wooden replica of the battery pack would have to be the same size. 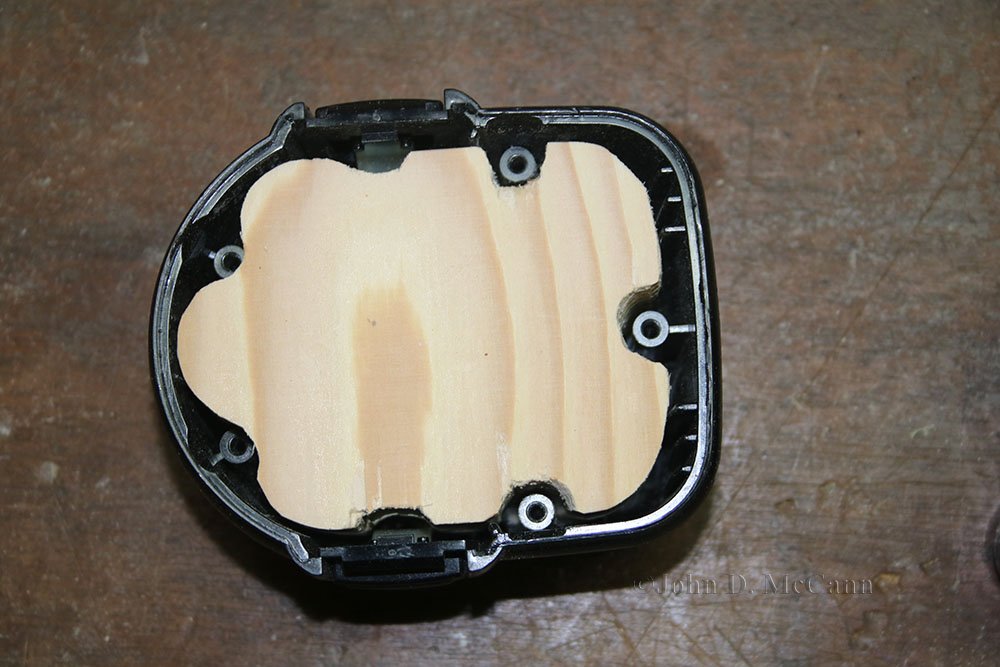 The completed block to replicate the original battery pack.

The next step was to remove the original “standoff” from battery pack and mount and wire it to the wooden block. I had an old cigarette lighter cord for something long unused, cut the original plug off the opposite end of the cigarette socket.

I wanted the wire to come out of the back of the battery case so it would be behind the cordless drill. I drilled a hole through the rear of the battery case to accommodate the wire. I then drilled straight through the wooden block. My plan was to put a groove in the front and rear of the wooded block that would accommodate the diameter of the wire. One, the negative, would come directly up the front of the block and be soldered to the negative plate that was attached to the “standoff.” The positive would go directly through the wooden block and be brought up the back and then across the top to the positive attachment point. A groove also has to be made in the top the diameter of one wire. 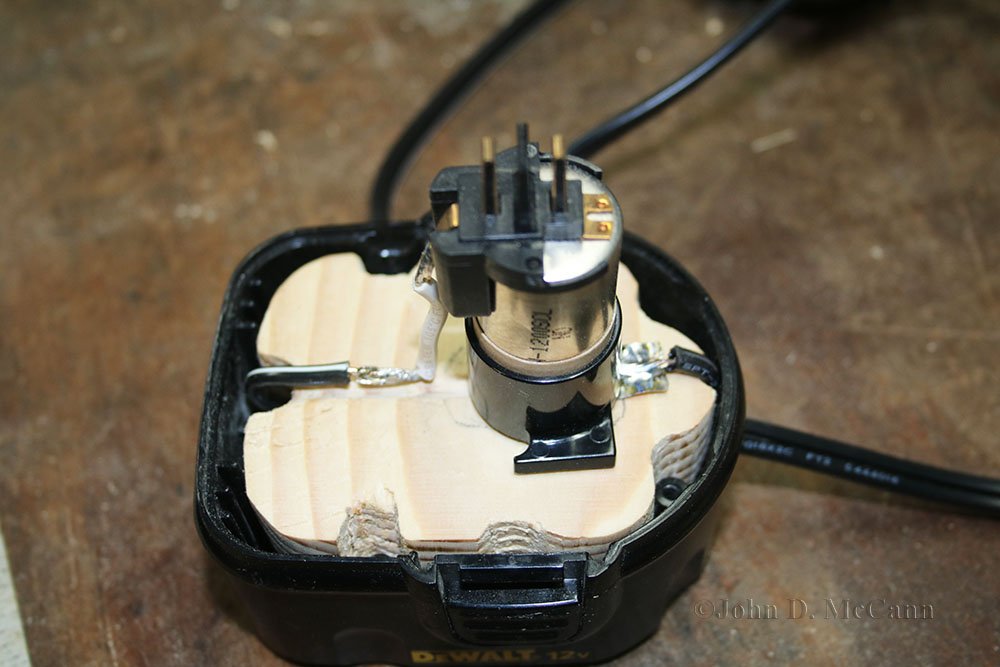 The 'standoff with prongs wired in place on top of the wooden block.

Once the wires were in place, the “standoff” was soldered in place. The top of the battery case was screwed back in place and the new wired battery pack was tested. Everything works fine and I now have an alternative to the old battery packs. 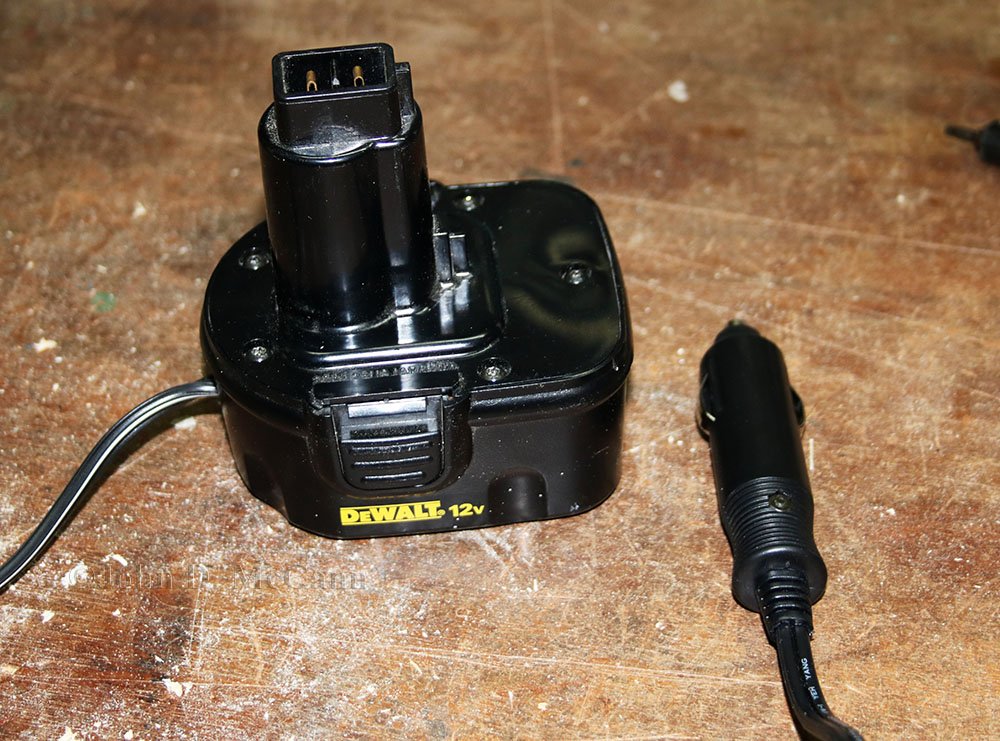 The top of the battery case screwed back in place and the wired battery pack is ready to use.

I can now use the 12 volt power pack that I keep in my truck or my old GoalZero Sherpa 120 (now discontinued).  You can also use a cigarette socket with clips for use with any 12 volt battery, such as in your vehicle. I now have various options for using my cordless drill both during a power outage or in the field if the regular batteries go dead. 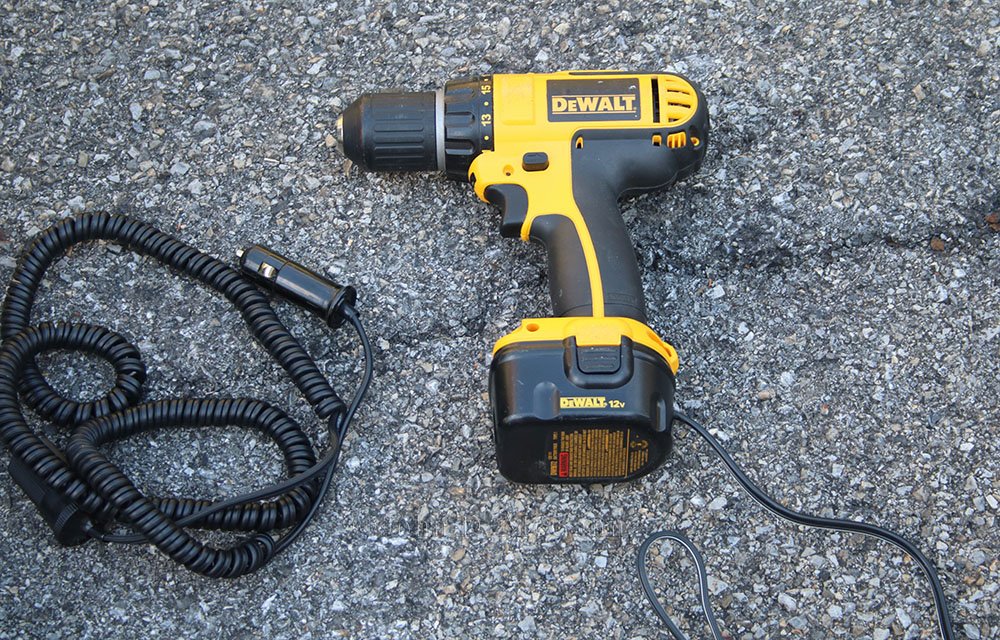 This shows the completed wired battery on the Dewalt cordless drill. To the left is an extension cable
with both a cigarette socket on one end and a plug on the other. It allows me to extend the distance
I can use the cordless drill from the battery being used to power it. 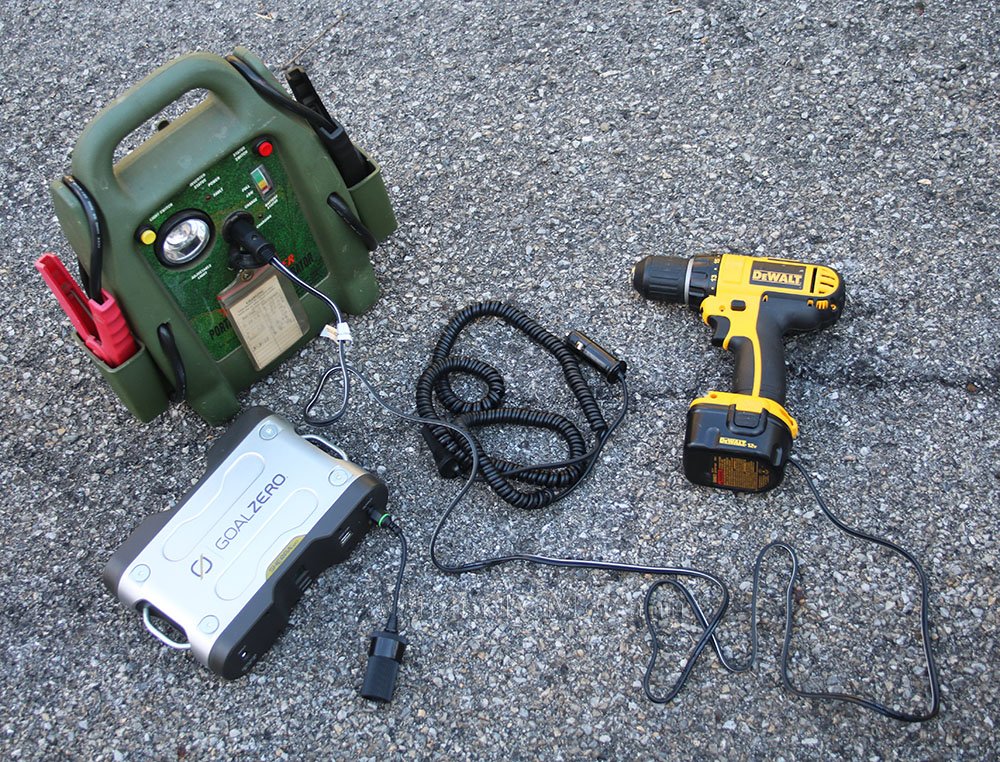 This shows the wired cordless drill with a 12 volt power pack, a GoalZero Sherpa 120, and the extension cable. 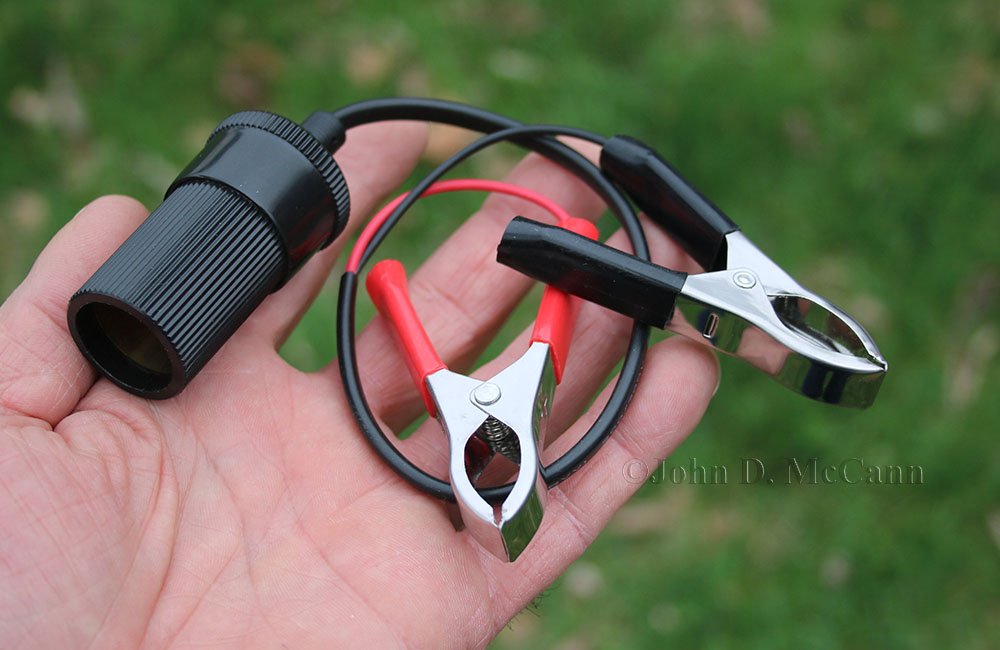 This is a cigarette socket with clips which allows you to use any 12 volt battery available with enough
amps to run the cordless drill.