Whenever I'm out for a hike, or just enjoying the woods, I am always checking out small stones I find to determine if they are hard enough to use with a striker for fire starting with char cloth. Because of this, I wanted a small striker that would always be with me. I decided to make a small one that would stay attached to my EDC Pocket Ring, that is always in my right pocket. Awhile back I posted a photo of this small striker on Facebook and I had a lot of people ask how I made it. So I thought I would do a quick tutorial explaining what I did. 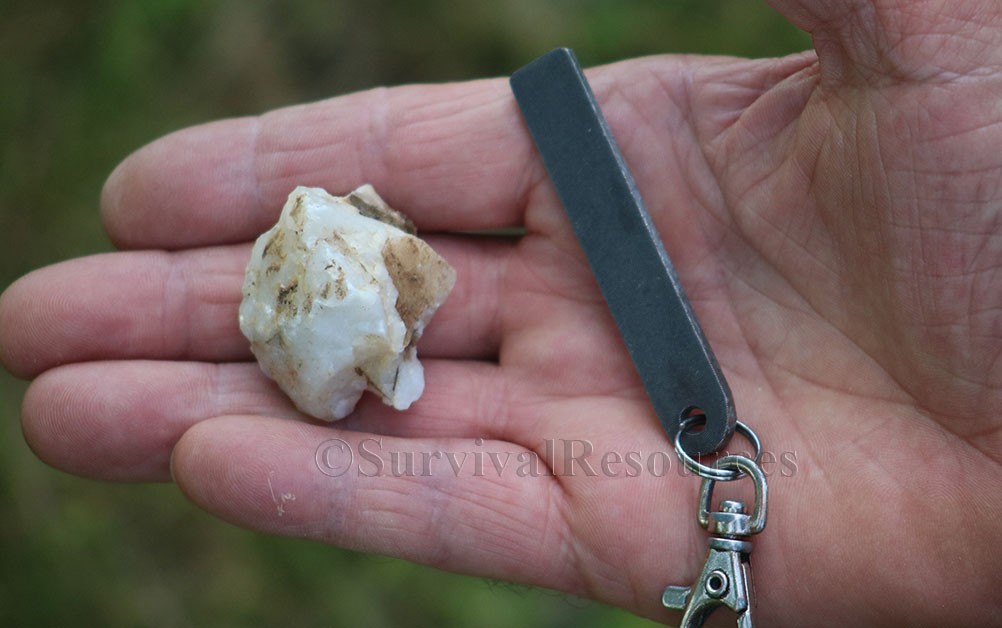 This shows the EDC Pocket Striker in the palm of my hand with a small piece of Quartz found in the field. 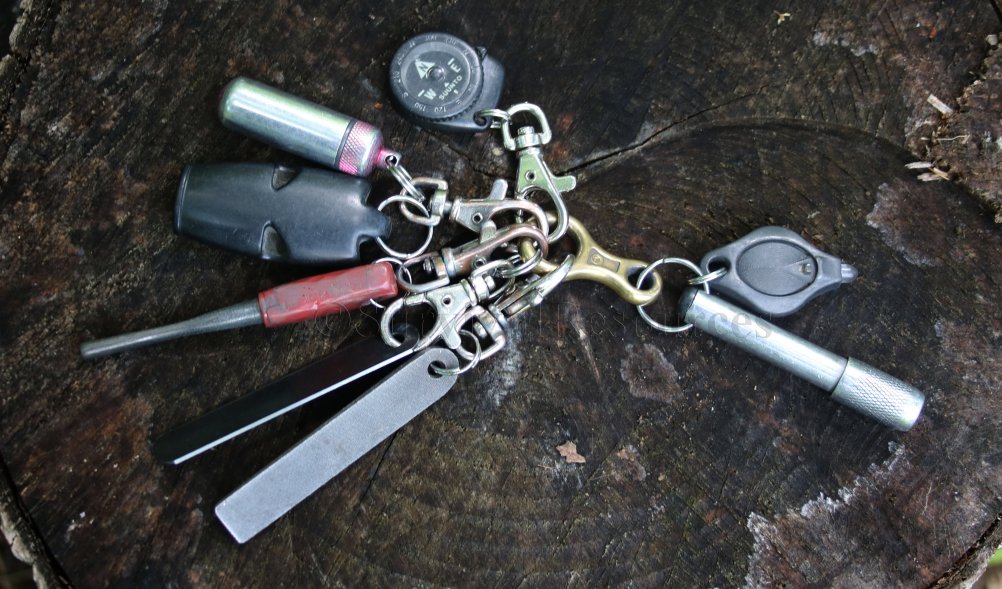 This shows the EDC Pocket Striker on the bottom left of my EDC Pocket Ring.

I decided that I would use a small  "Safe Edge" file. These type of files are useful for precise detail  work.  I use them when I want to file in one direction, but not in another, such as widening a grove that you don't want to make deeper. However, the file is rather long so I knew I would have to shorten it. I decided to use a grinder.

This shows a regular safe edge file and the size of the one I cut down for my EDC pocket ring.

This shows a close-up of the smooth edge of the files.

This is a diagram showing how I was going to grind in at an angle from both sides, using a grinder, and after
rounding off the end, drill a hole. Keep in mind I am not an artist.

Using the side corner of a grinding wheel you need to grind in towards the center of the file at a 45 degree angle, which will give you a 90 degree notch in the file. I made a white mark on the file first at the length I wanted the finished piece. This should be done a little on each side working towards the center. Be sure to quench with water after a few seconds of grinding, and don't be in a hurry. I grind a little on one side, quench with water, and continue on the other side. Continue to alternate sides until you are through to the middle, separating the front piece from the rest of the file. You will have a point on the end which you will need to grind half round. I also slightly rounded the front corners to ensure there were no edges that would grab on my clothing.

Next you will need to drill the hole which initially I had a problem doing. But I found that the Black & Decker "Glass/Tile Drill Bit" made an easy job of it. I used a 3/16" bit. 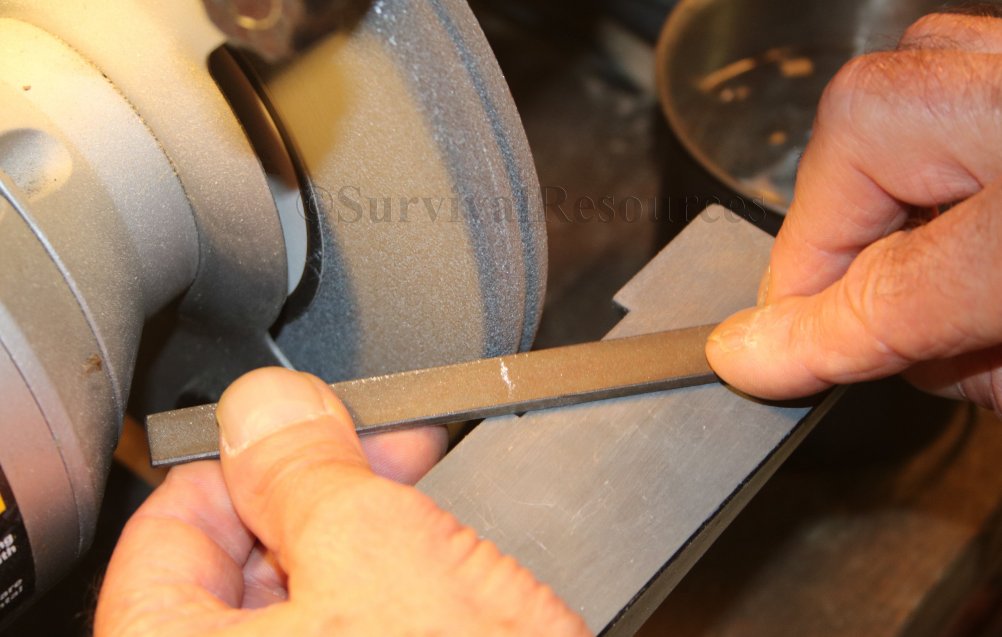 This shows the white mark where the corner of the grinding wheel would begin. 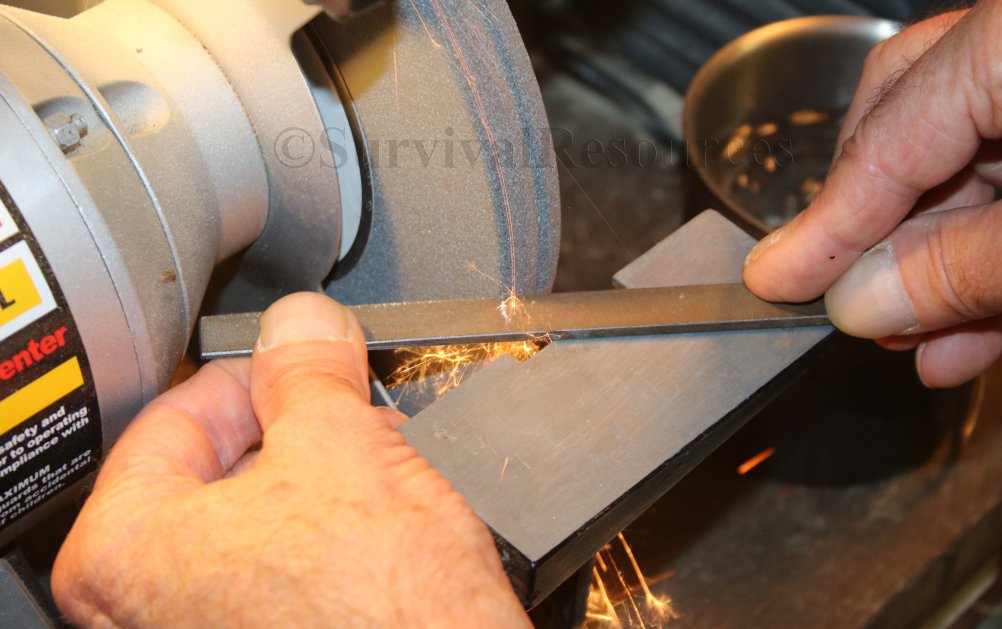 Beginning the first groove into the side of the file. 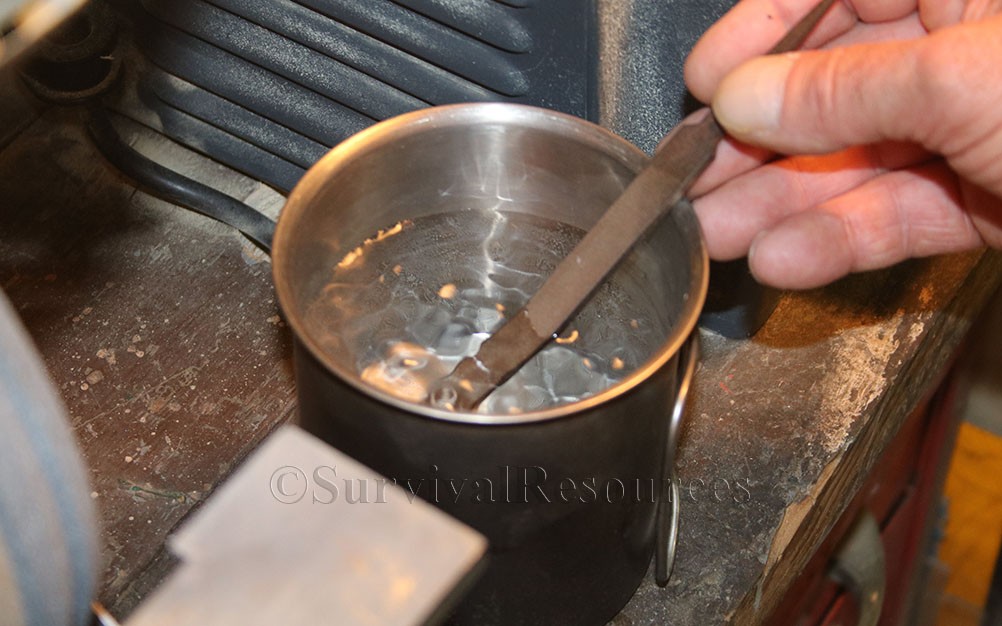 Quenching in water was done after several seconds of grinding. 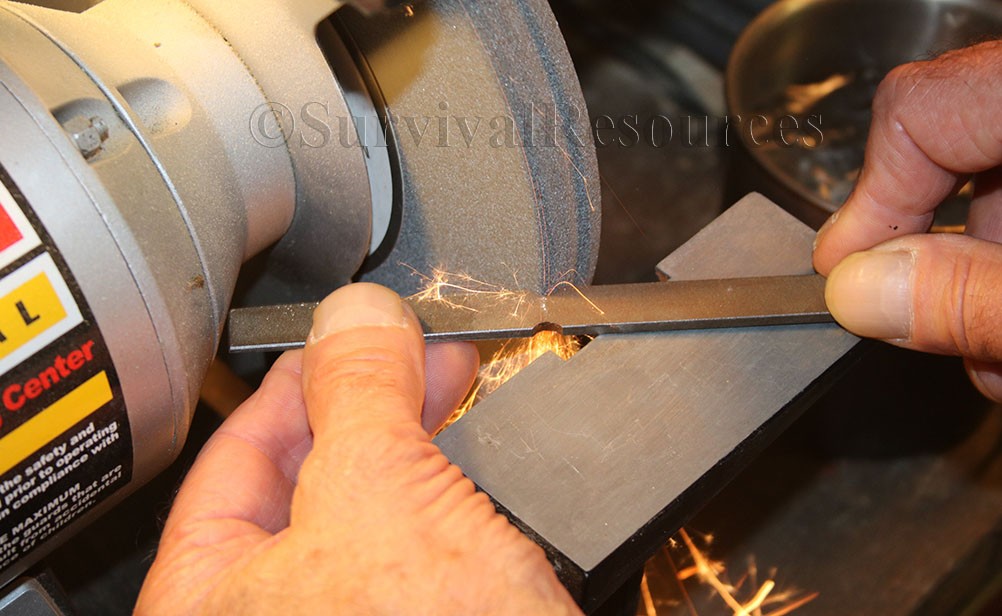 The first groove can be seen on the front side while grinding begins on the opposite side. 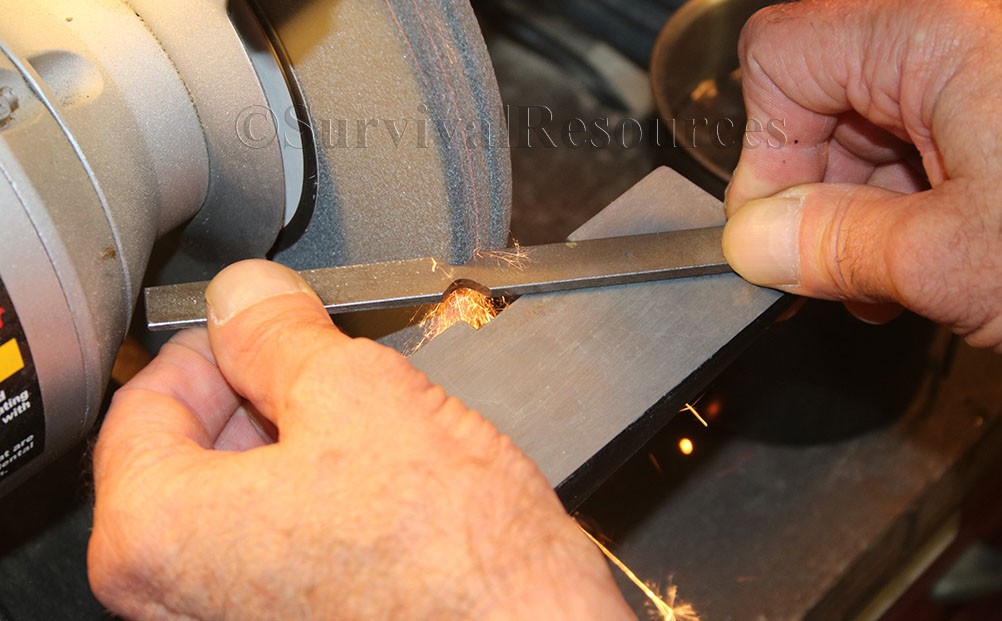 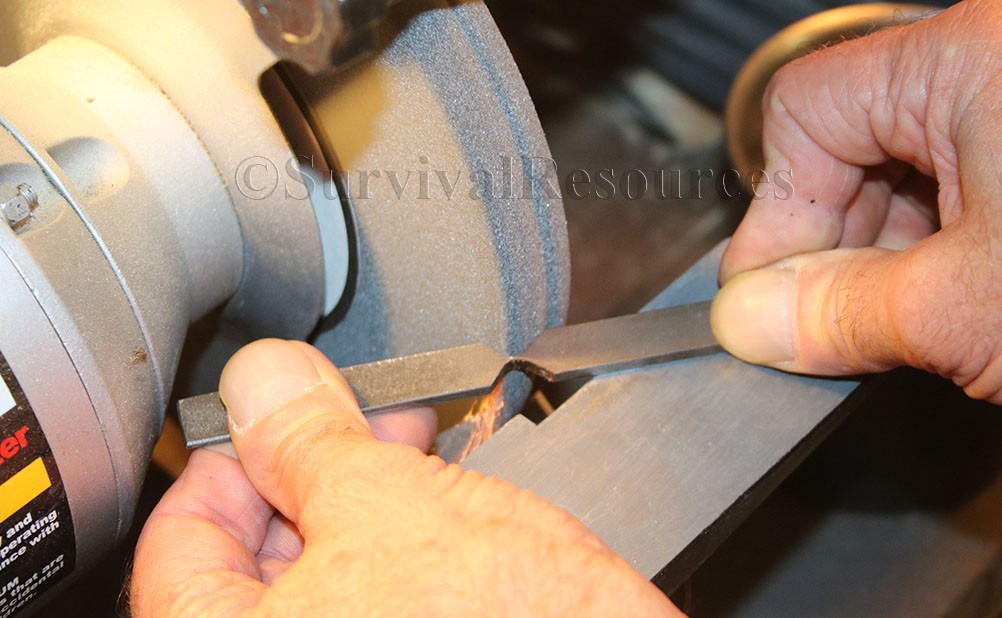 The grooves are  just about to meet in the center of the file. 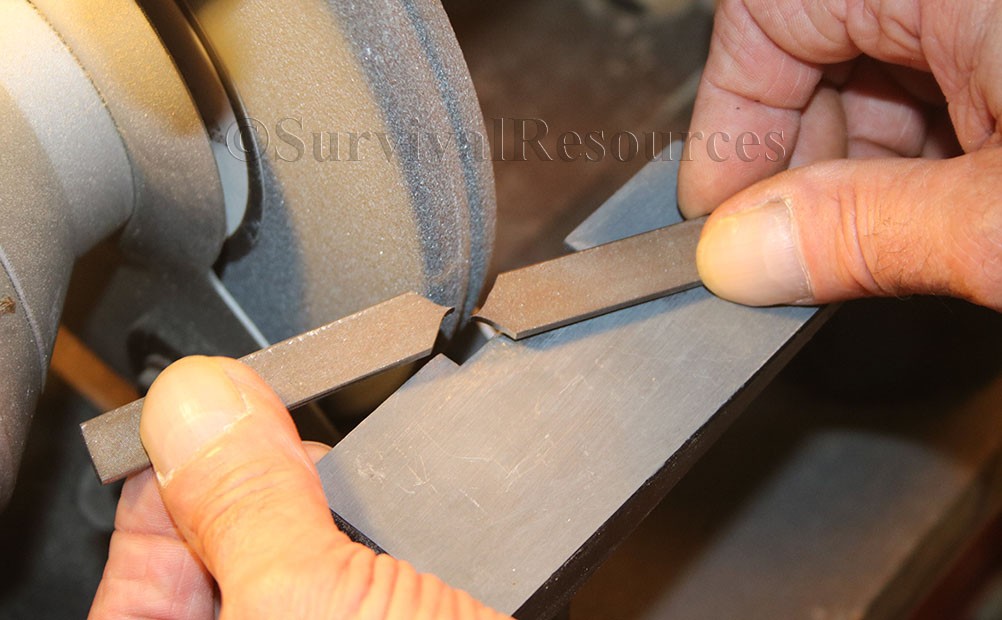 The front portion of the file separates from the rear.

This shows the completed cut of the front of the file from the rear portion. 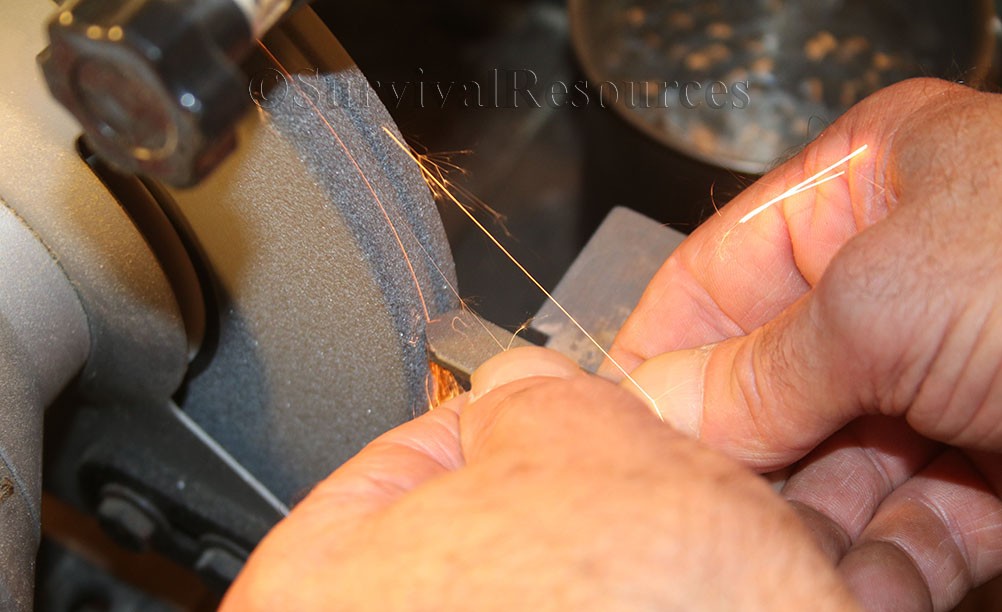 Rounding off the end that has the point. 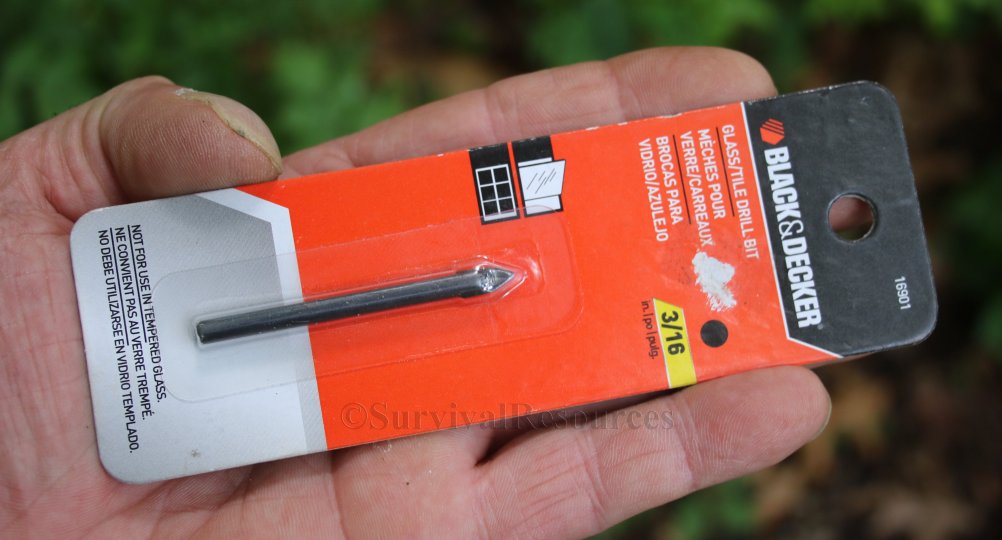 This photo shows the Black & Decker Glass/Tile drill bit used to drill the hole at the rounded end. 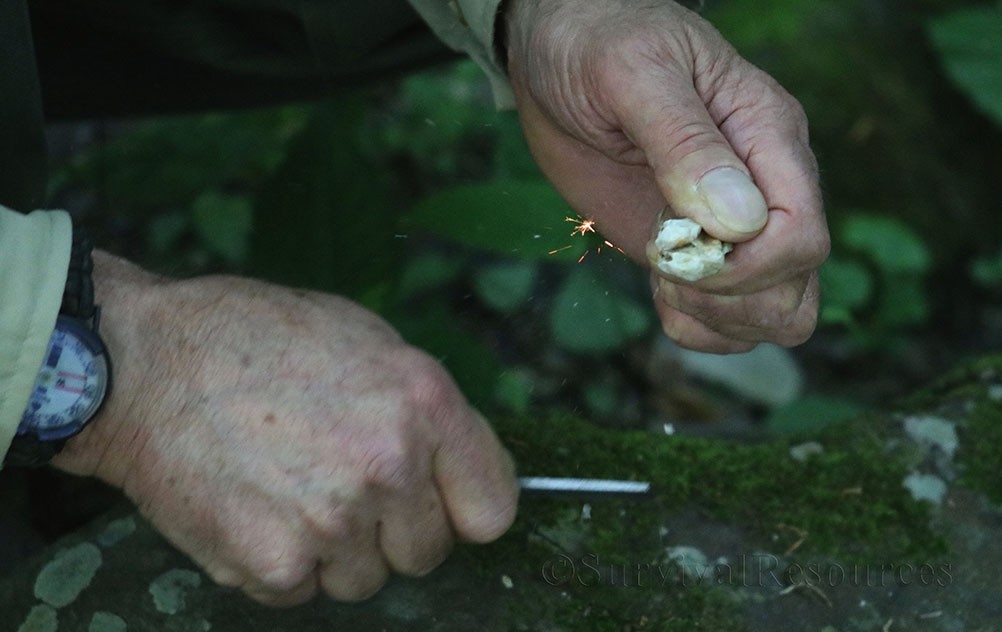 This shows the EDC Pocket Striker being used to test a stone for hardness.

A closer view of the sparks created from the striker when striking the piece of quartz.

Well there you have it. This is how I made my EDC Pocket Striker so now you can go make one for yourself.