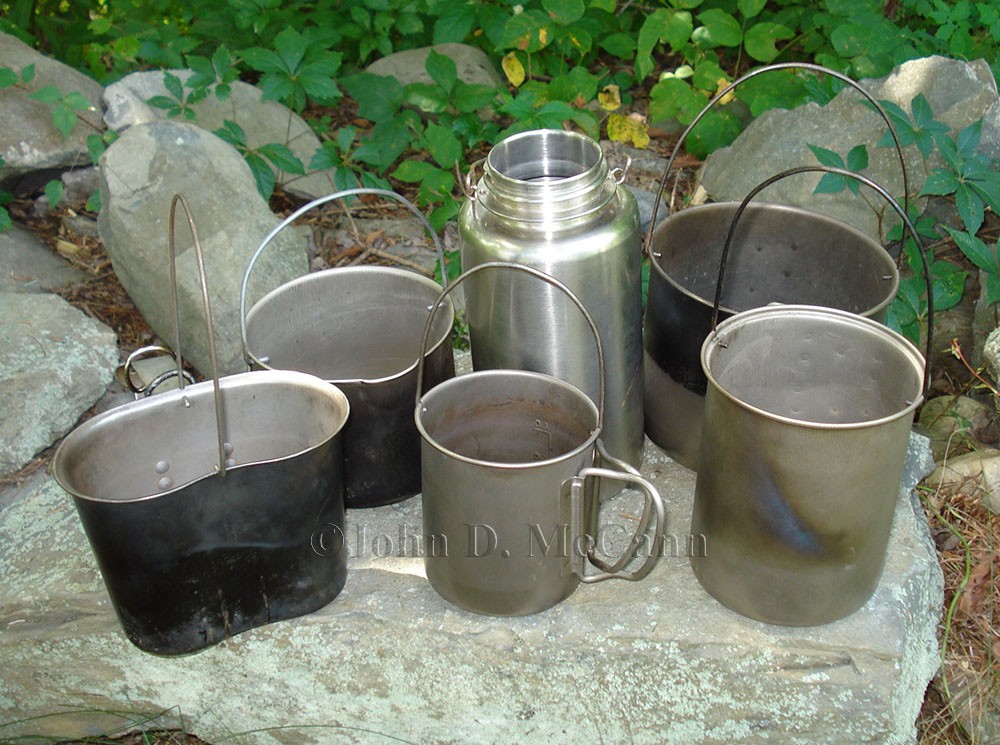 Back when I was young (a long time ago), most pots for camping seemed to have bails on them. It made them easy to hang over a fire, and lift out of a fire. However, in today's world of ultra-light gear, bails are often deleted from smaller pots, and replaced (sometimes) with small folding handles. But I still like bails.

I often see bails added to smaller pots by drilling holes in the side and adding some flexible wire (often snare wire) in order to hang and lift a pot. However, I prefer a free standing bail. These are bails that stay standing upright by using holes and rounded groves, but can be removed when not in use.

You should be careful here to make sure the holes are directly across from each other, or the cup or pot won't hang straight. I drill holes into the side of the cup or pot, just below the lip. I then mark a line on the lip directly above the hole. I file a small grove on this line using a 3 corner jewelers file. This grove is used to keep a round jewelers file on line with the hole. The round file is then used to make a half round hole in the lip. 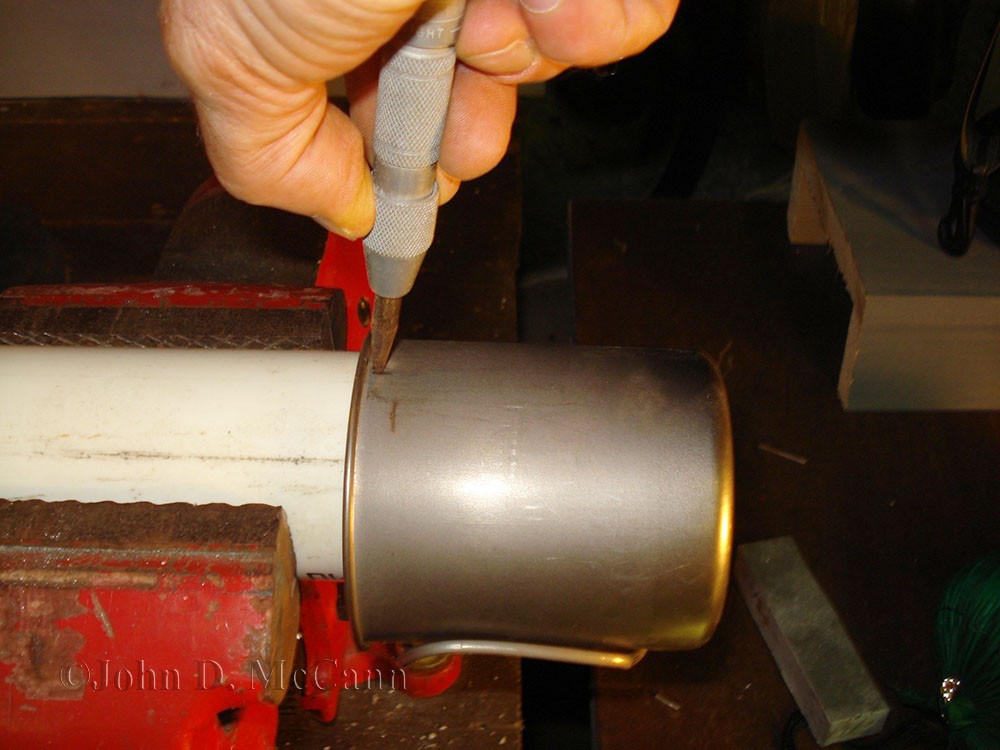 Using an Auto-Punch to mark the holes on each side of the cup. 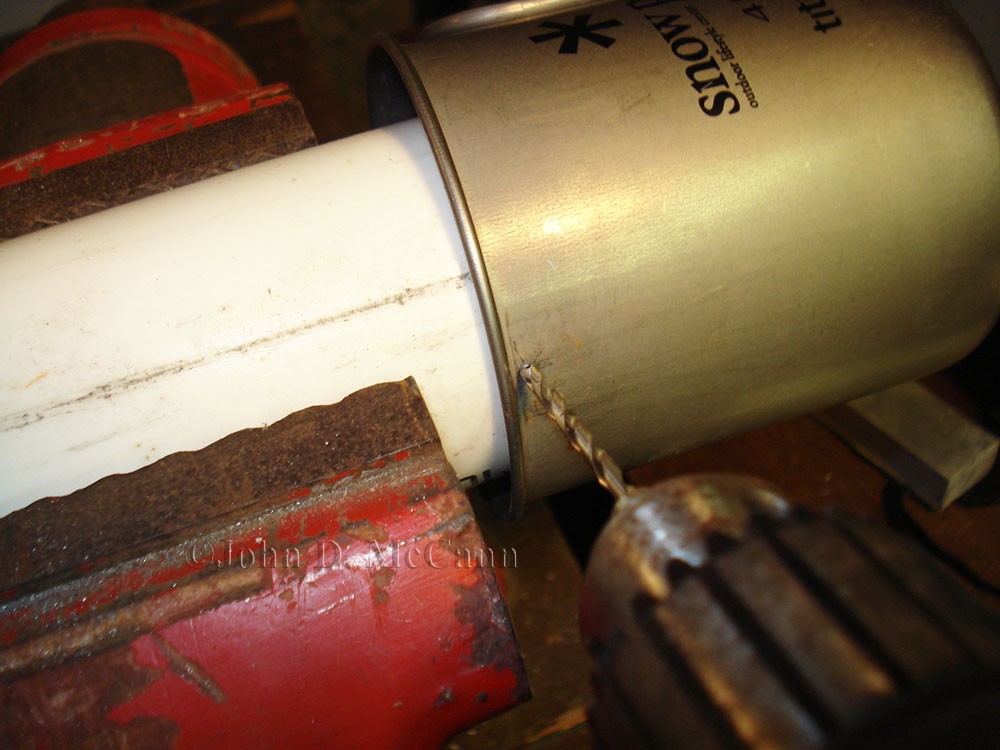 Drilling the bail hole just below the lip of the cup or pot. 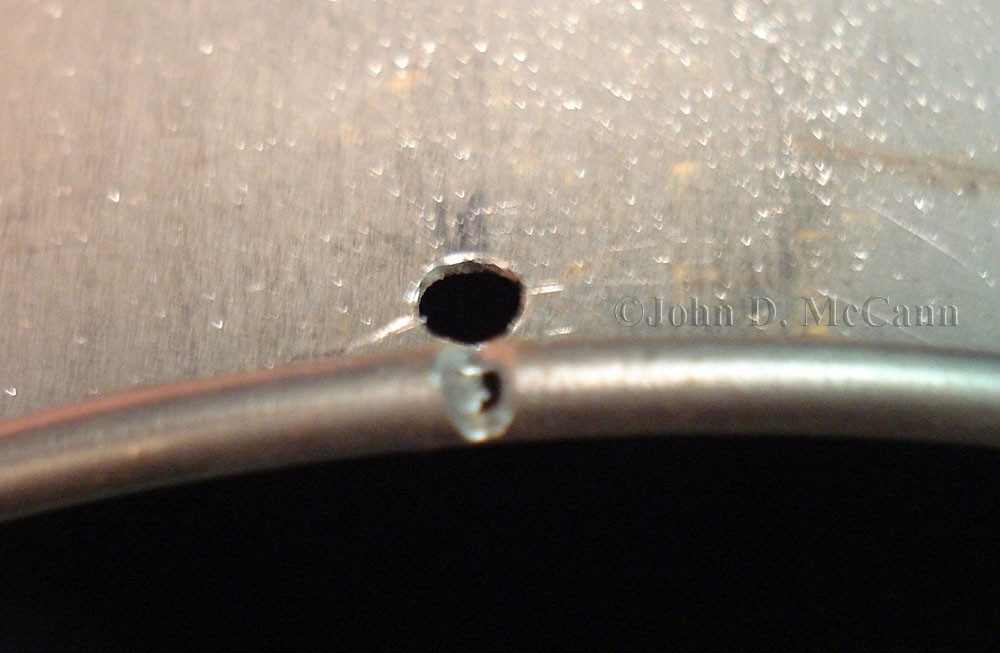 Use a 3 corner jewelers file to start grove directly above the hole. 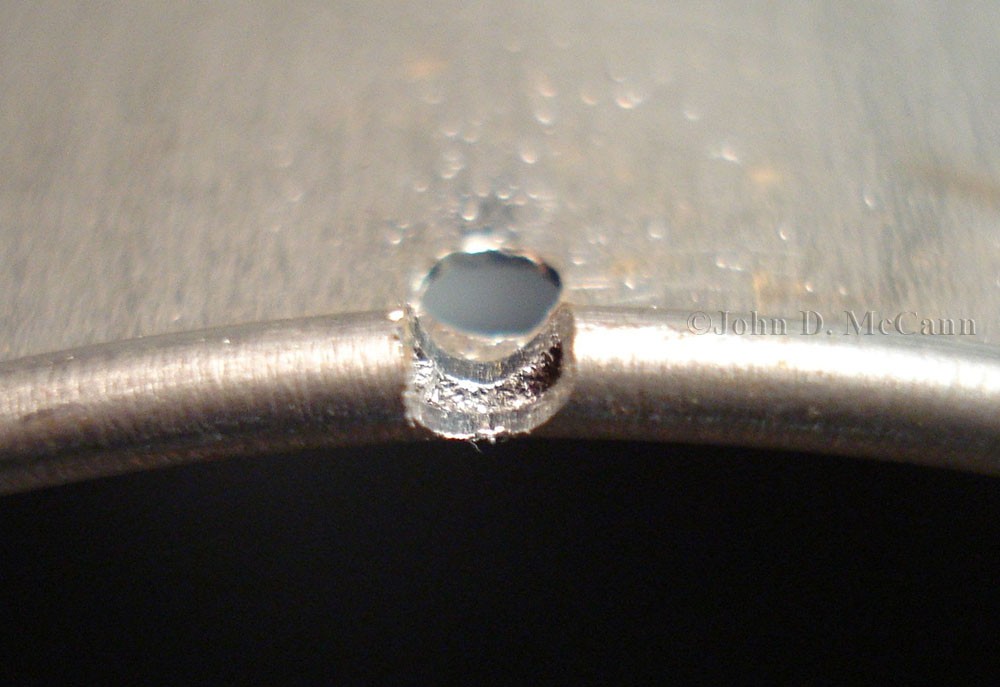 Then, using a small round jewelers file, make the grove round, so it is the same size as the drilled hole.

A bail is made from the 3/32" Piano wire making a 90° bend, inwards. The bail is placed onto the cup or pot by inserting the inward bends into the holes. The bail should be made so that it is slightly narrower than the width of the cup or pot you are making it for. As the bail stands up, the pressure of the bail against the cup locks the bail into the half round groves. It is easily removed by spreading the bail and storing it with your gear. 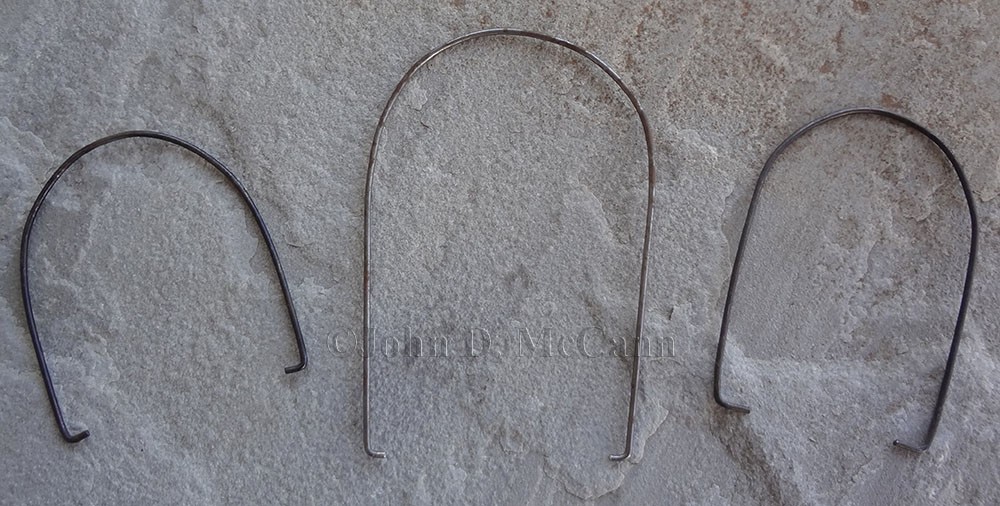 This shows various sized bails made from 3/32" Piano wire. 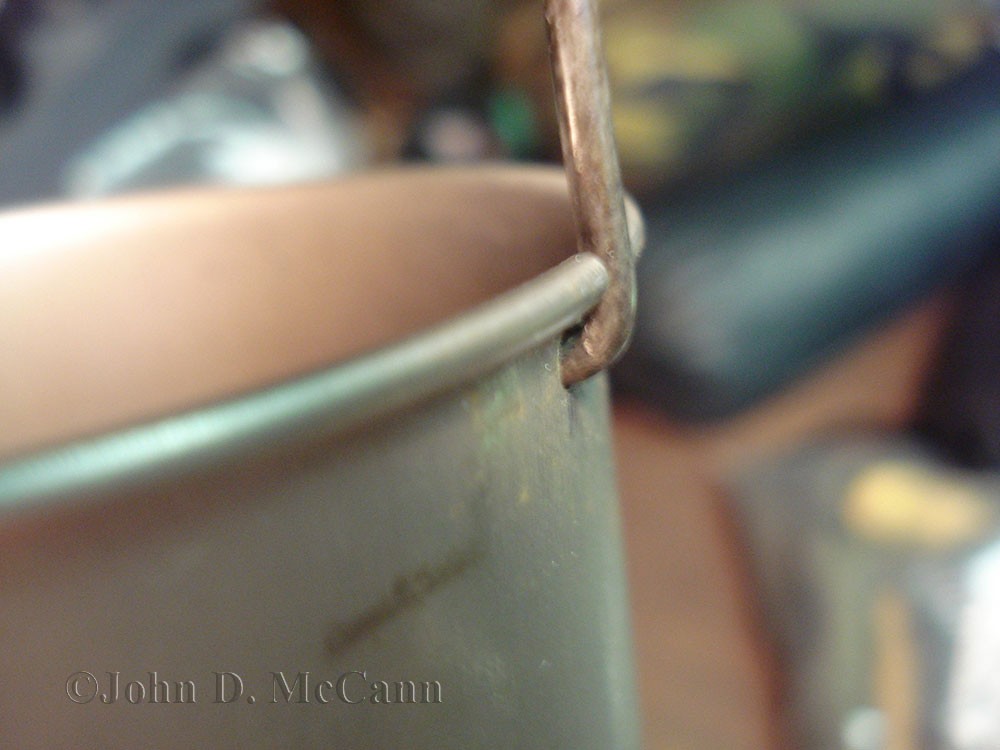 This shows how the bail is inserted from the outside of the cup or pot. The pressure of the bail
against the outside will hold it in the half-round grove.

One of the advantages of a free standing bail is the ability to lift a hot pot or cup out of a fire. I usually use a lifting stick made by placing a notch into the end of a stick. The notch can grab the bail without the bail sliding off the end of the stick. 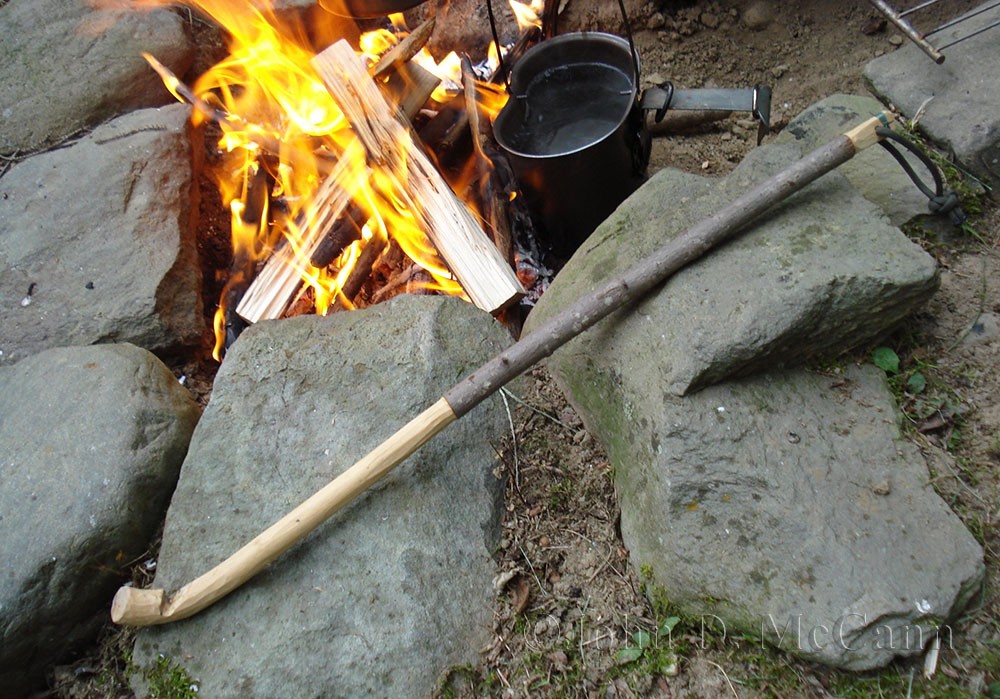 Example of a simple lifting Stick that can be made in the field. 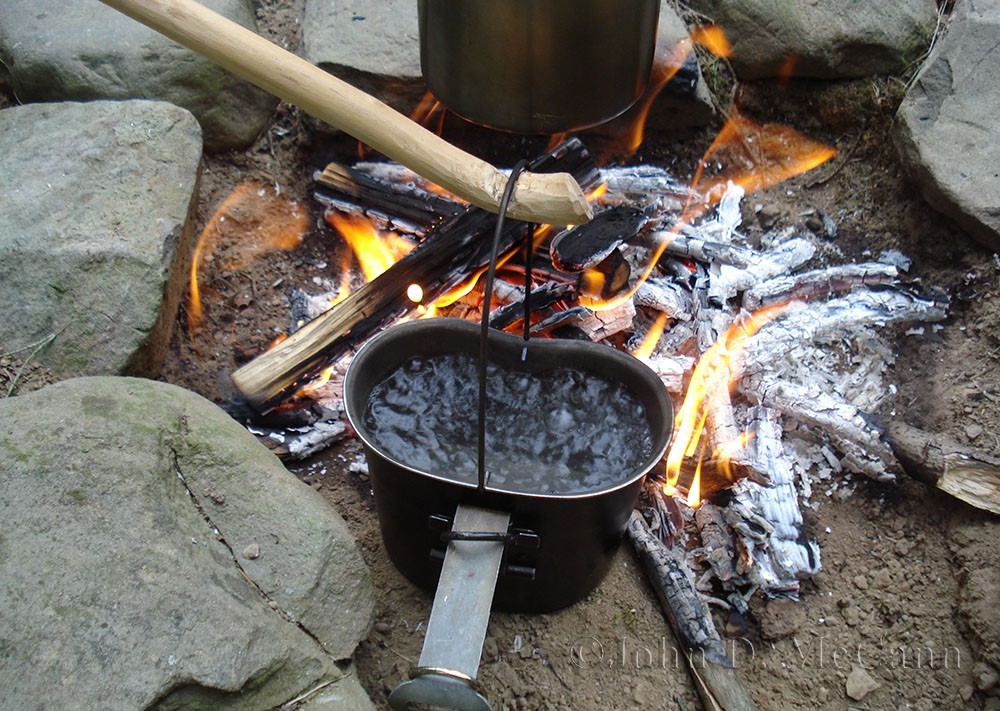 This shows a lifting stick being used to raise a canteen cup with a free standing bail out of the fire. 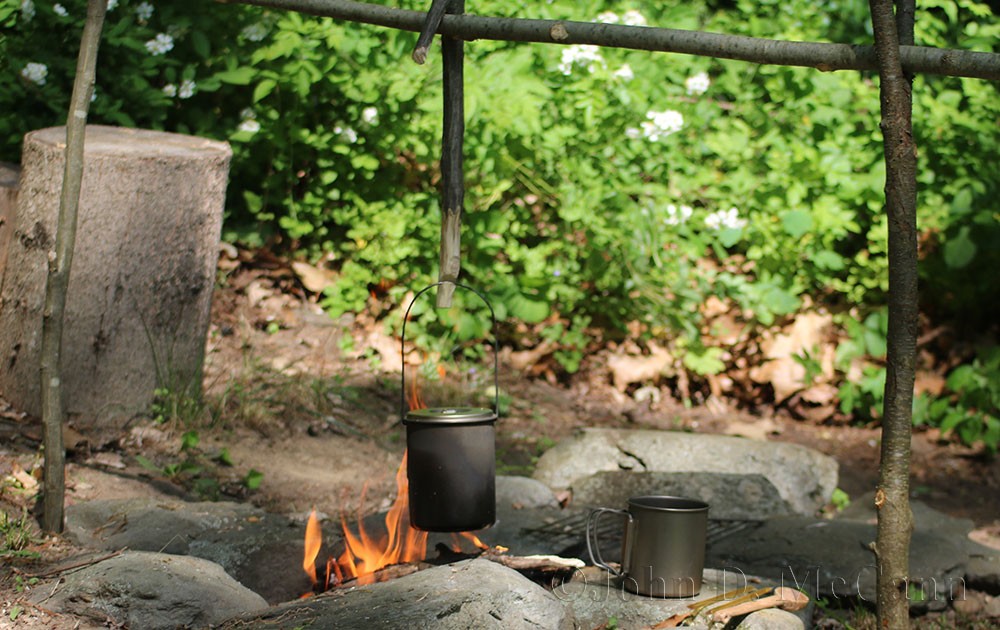 This shows a pot with free standing bail hung over a fire.

As you can see, making a Free Standing Bail is not difficult and only requires some basic tools. Being "Free Standing" you don't have to worry about it falling over the side when setting in a fire. Bails are not only easy to make, but give a lot of versatility to cups, pots, and bottles.