History of the Spark-Lite Fire Starter 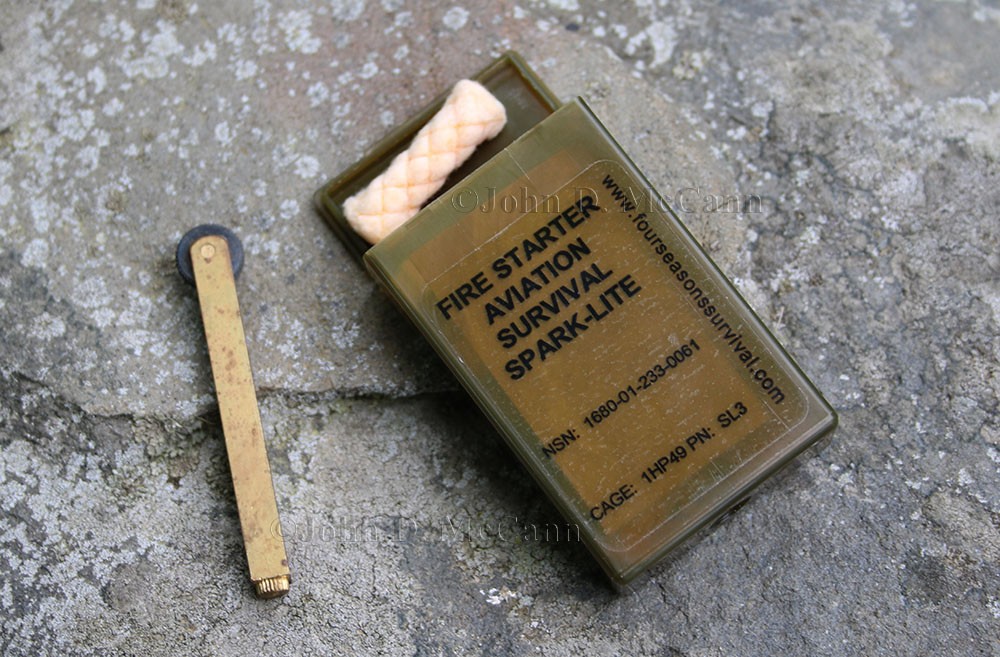 The Spark-Lite™ Fire Starter is a very unique fire starting device, and the first one-handed fire starter. I have seen various references made to the origin of this device, from "it was developed by the military" to "the Spark-Lite Fire Starter, made by ..." I have also seen many copies, especially in the last few years, and so felt that the credit for this unique fire starting device should be given to the individual that actually invented it, designed it, and has been manufacturing it ever since.

The Spark-Lite™ Fire Starter was the invention of Oak Duke Norton, Jr. Oak was in the US Army, serving first in Korea, and then in Vietnam in 1963, 1967 & 1968. While there, he discovered that the issue lighter in survival kits often leaked and, as with matches, unless they were sealed in a waterproof container, proved useless.

When Oak retired in 1973, after serving 24 years, he became involved with the Scouting program, as well as the Civil Air Patrol Search & Rescue operation. During these activities, Oak observed the same problems he had in Vietnam; damp matches and lighters that failed to operate. He began experimenting, looking for something smaller than the heavy magnesium bar that was currently in use. He wanted something that would create a spark for ignition, and also be waterproof. Sometime in 1979, Oak created a small two-handed model device which was very useful, and he called it the Spark-Lite™. It was called a two-handed model because it was held between the thumb and forefinger on one hand, and the knob was spun with the thumb and forefinger of the second hand, to create the sparks. It is still very effective today. The following photographs are taken of the original Two-Handed Spark-Lite Fire Starters which are from my private collection. 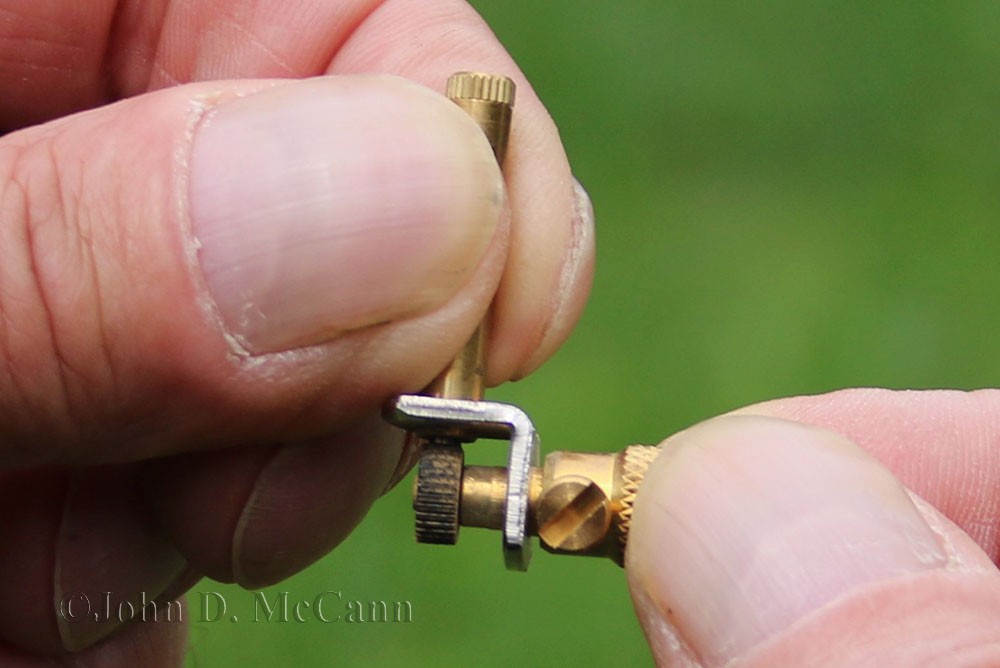 A view of the Original Two-Handed Spark-Lite Fire Starter, showing how it was held for use. 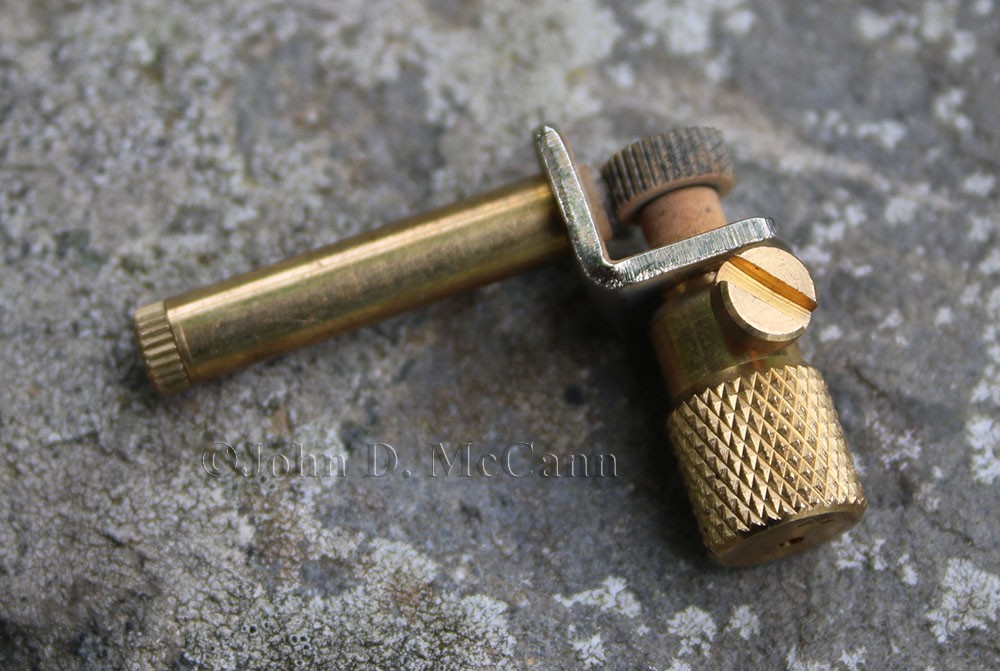 This a close-up view of one side of the Original Two-Handed Spark-Lite Fire Starter. 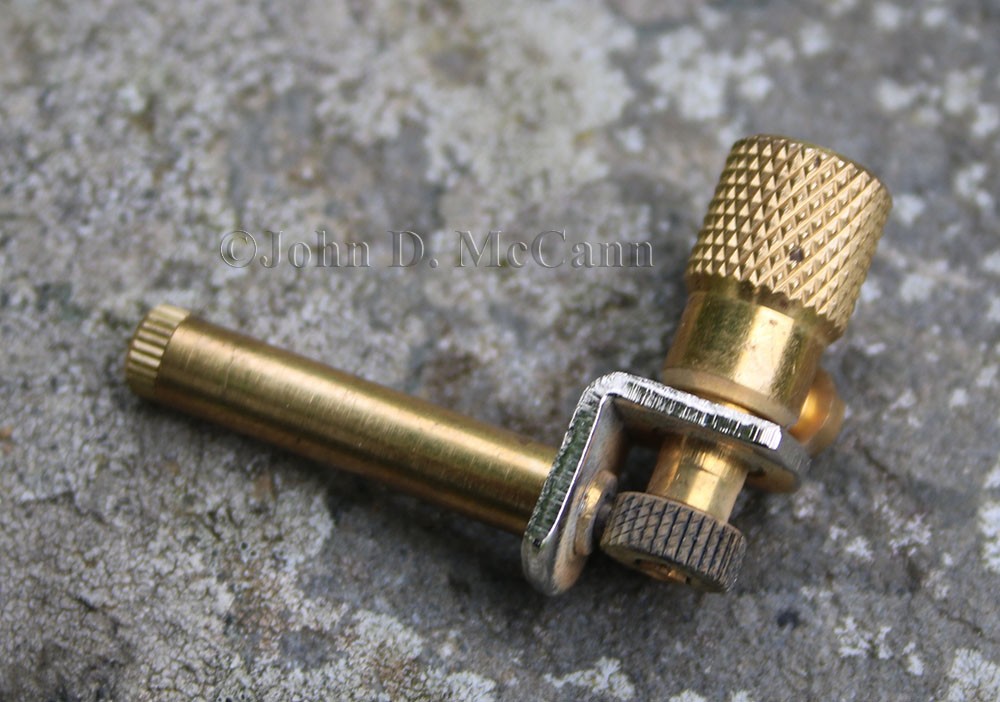 This a close-up view of the other side of the Original Two-Handed Spark-Lite Fire Starter.

This shows the sparks still produced today from one of the Original Two-Handed Spark-Lite Fire Starter.

At the same time Oak was working on developing the Spark-Lite™, he was also working on producing a tinder that would fit in a small plastic box which would hold the Spark-Lite and eight pieces of tinder. To make a long story short, it started with a toothache, and while visiting a dentist he discovered a roll of cotton that gave him the idea for Tinder-Quick™ Fire Tabs, which is also Oak's invention. After experimenting with various cotton rolls, he worked with a company to develop a wax formula that would provide ideal ignition from sparks, generated from the Spark-Lite™, and also provide waterproofing. Tinder-Quick™ was born, and Oak had an effective fire starting system. He started the company "Four Seasons Survival" and starting selling it commercially as an all weather fire starter and called it the Spark-Lite Fire Starter and Tinder-Quick Fire Tabs. 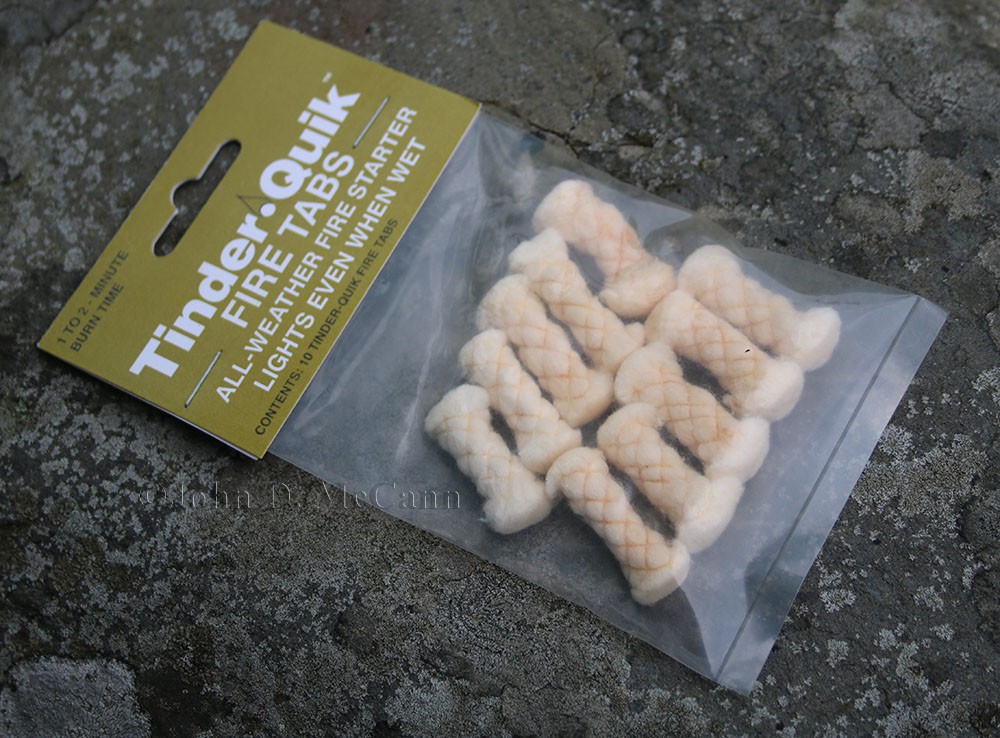 This shows a package of the original Tinder-Quick Fire Tabs. 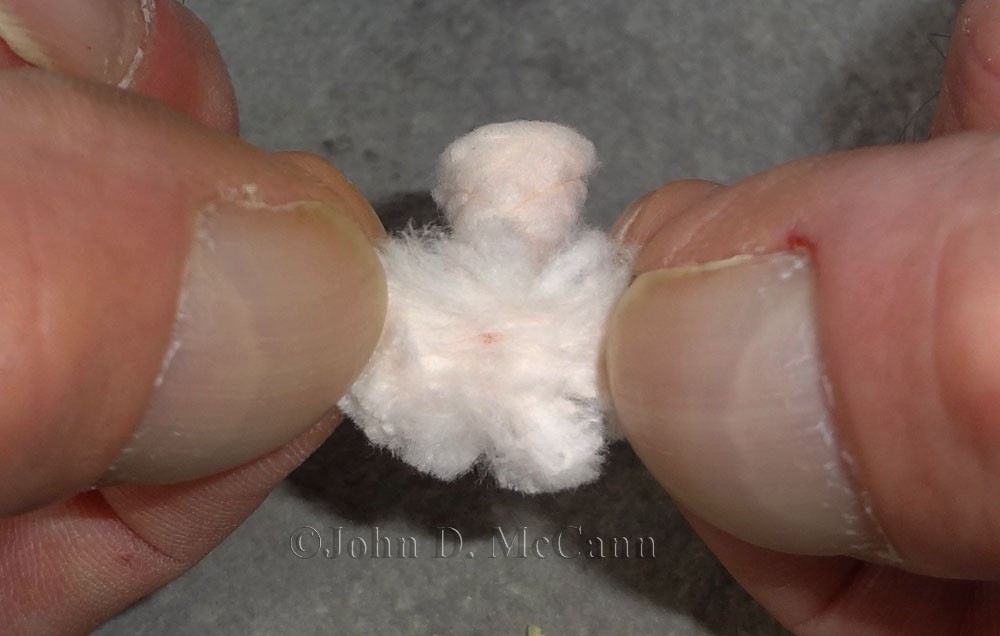 This shows how you pull the Tinder-Quick tabs apart to get them fluffy before you spark them. 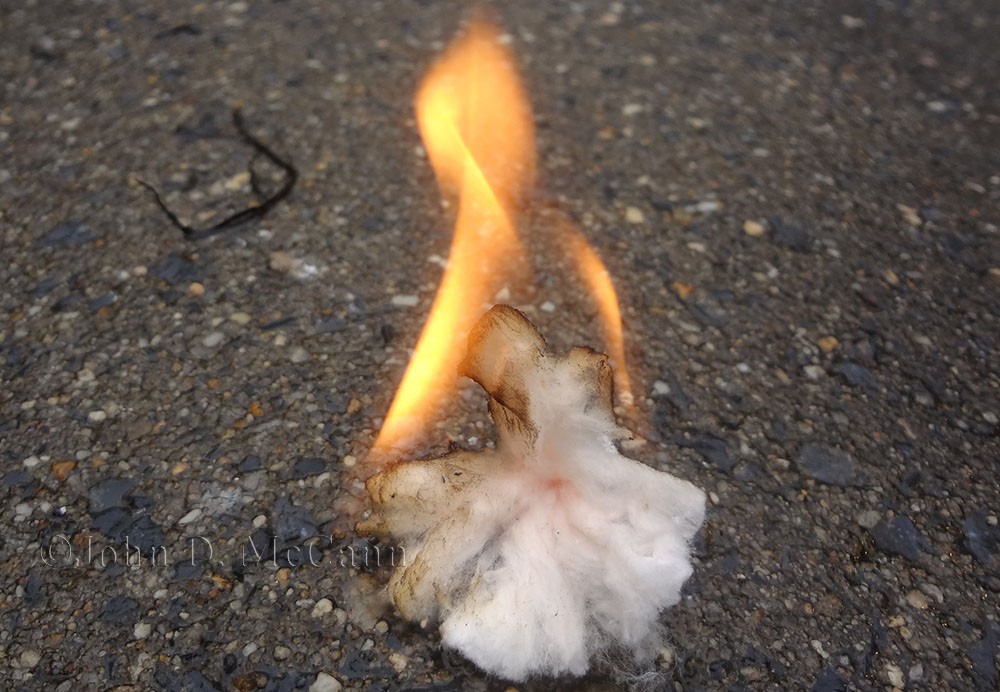 This shows a Tinder-Quick burning after having been struck by a spark form a Spark-Lite Fire Starter. 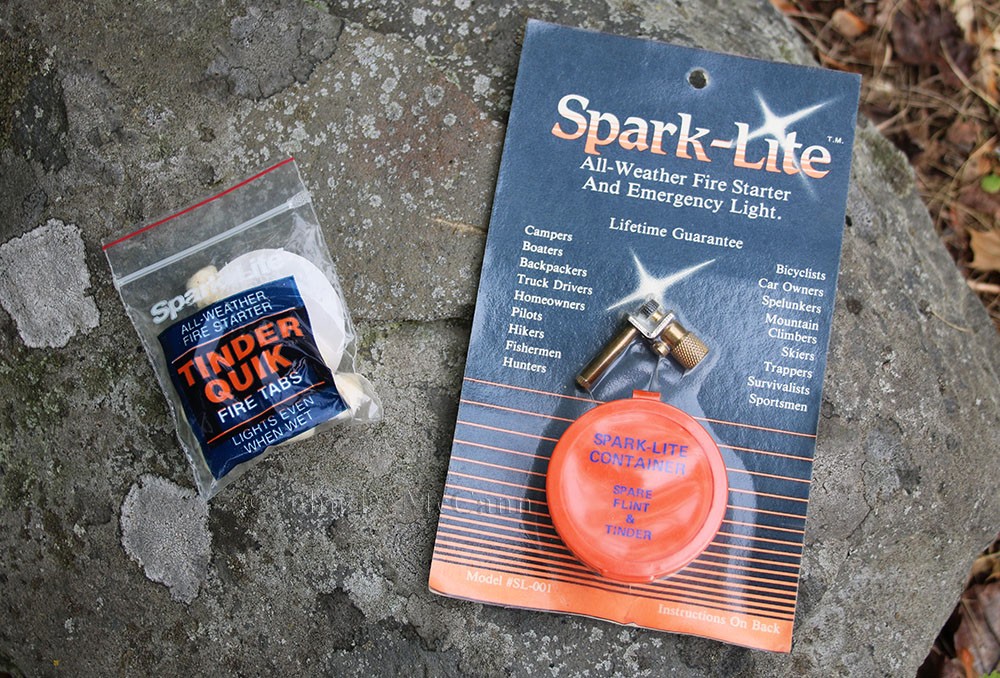 Oak also envisioned a one-handed model. In 1984, when he finally had a concept for a one-handed model, he visited a commercial printer and asked for someone with expertise in mechanical drawing. He was given the name of a company and visited their office. He was asked to do a rough sketch of what he had in mind. Shortly afterwards, he had a finished mechanical drawing to work with. He took that drawing to an engineering firm and had them make a brass model from the sketch. The original prototype was round and was difficult to hold when trying to spin the striker wheel, so Oak went back to the drawing board.

Oak felt that if the device was square, it would be easier to hold between two fingers, while spinning the striker wheel with a third finger. This new square prototype was tested and Oak found that it worked, but with the spinner on the side of the device, it was not that easy to spin with one finger. He went back to the drawing board and finally came up with the idea of using the flint striker wheel in the center as the spinner for the third finger. It worked very well and this became the finished prototype. This original device also had a small screw at the bottom, so the flint could be replaced. In 1985, he had a number of them made and sent them to several dealers to see if they would be interested in carrying the product. The following photos show the original prototypes with the finger wheel on the side and the final version with the flint wheel in the center being used as the spinner. one of the original Brass Spark-Lite™ from my personal collection. 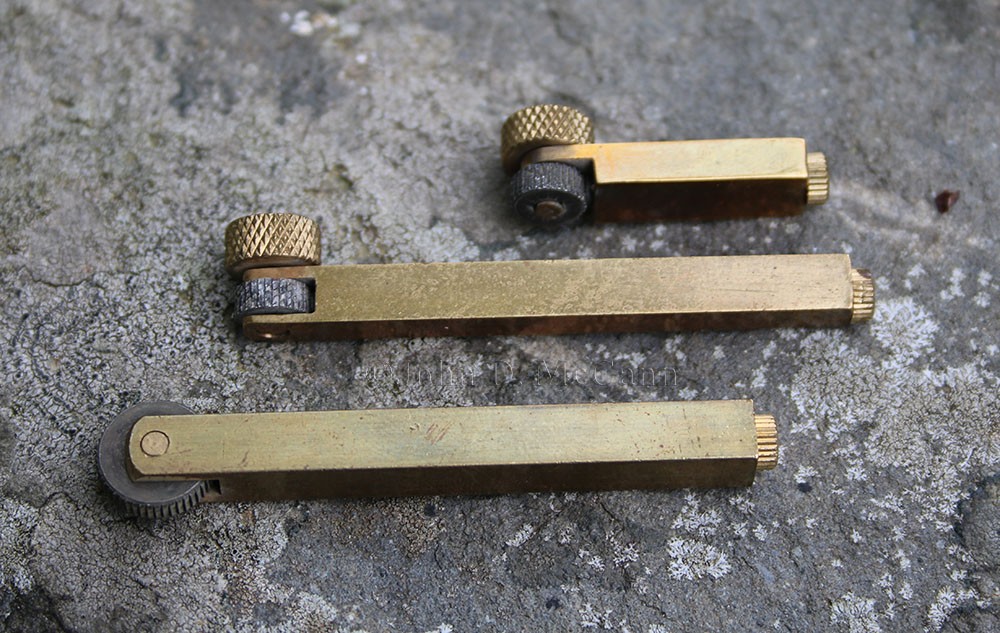 This is view of various prototypes for the original One-Handed Spark-Lite Fire Starter from my collection.
The one at the bottom was the final design for production. 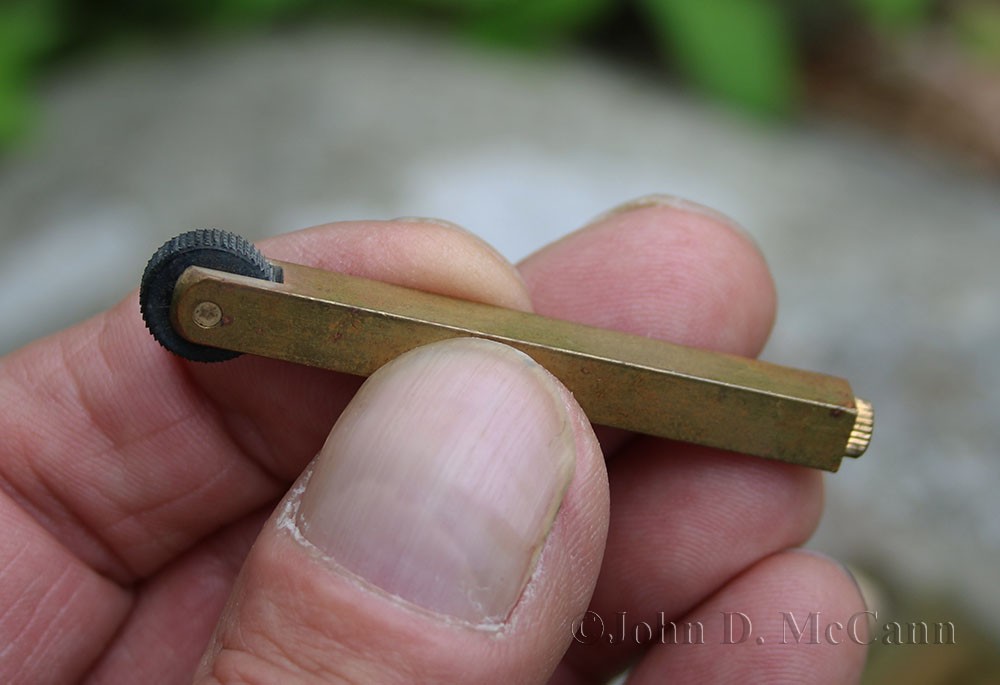 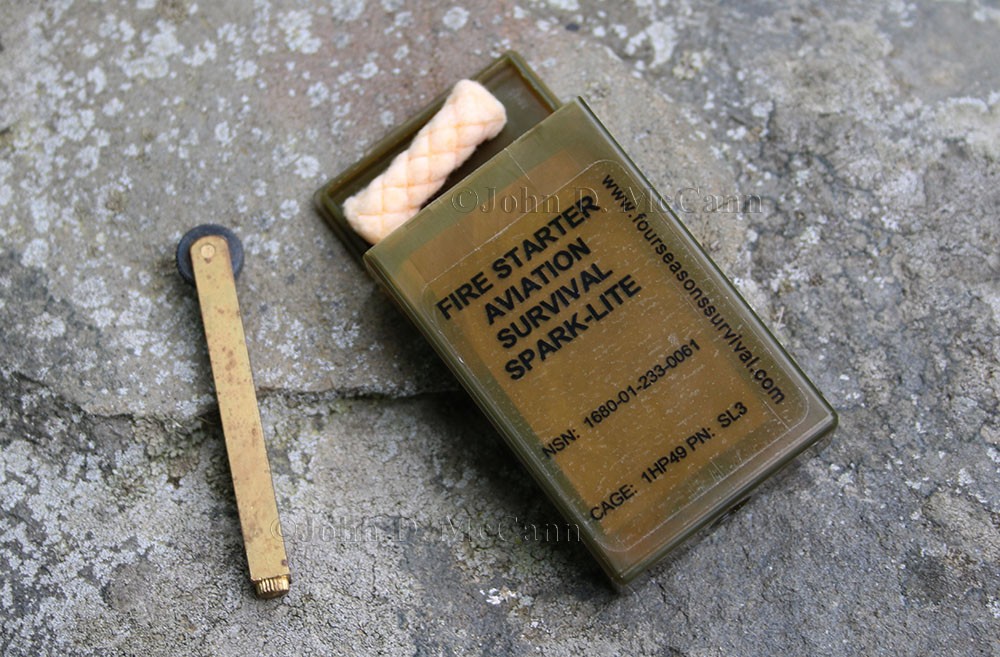 A view of original Brass Spark-Lite with original case and Tinder-Quick. This packaging is still in use today.

Somehow, the Army Research Institute at Natick, MA got hold of one of these early models and contacted Oak for further information. Oak visited the institute and discussed the product with them. They liked it, but it was heavy. They wanted it to be made out of plastic. If he could have them made from plastic they would take 24 to be field tested.

Oak's next step was to locate a factory that would create the mold and make the finished product out of plastic. When this was accomplished, Oak sent the units to the Army Research Institute for testing. Several of those first units were then forwarded to Alaska and Florida for testing. After a few weeks, Oak was contacted by the Army and they placed an initial order for 28,000 Spark-Lites. They liked the fact the device permitted a person with an injured hand or arm to work the device with just one hand. In the meantime, Oak named the device the Spark-Lite, discontinuing the two-handed model. 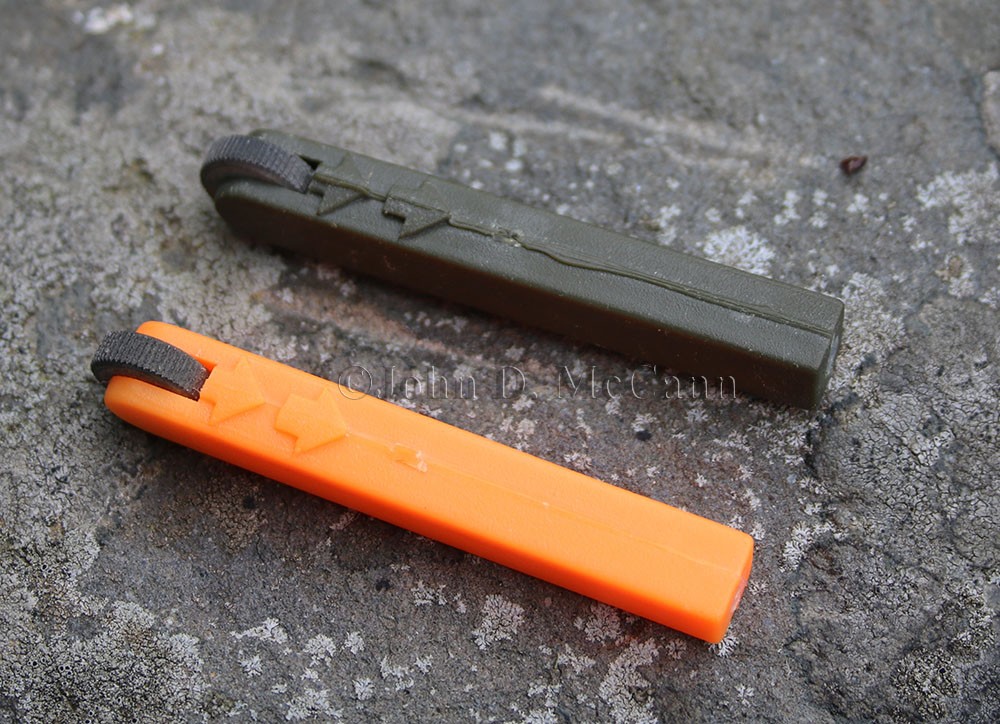 A view of both the plastic olive green and fluorescent orange Spark-Lite Fire Starters selected
for use by the military. 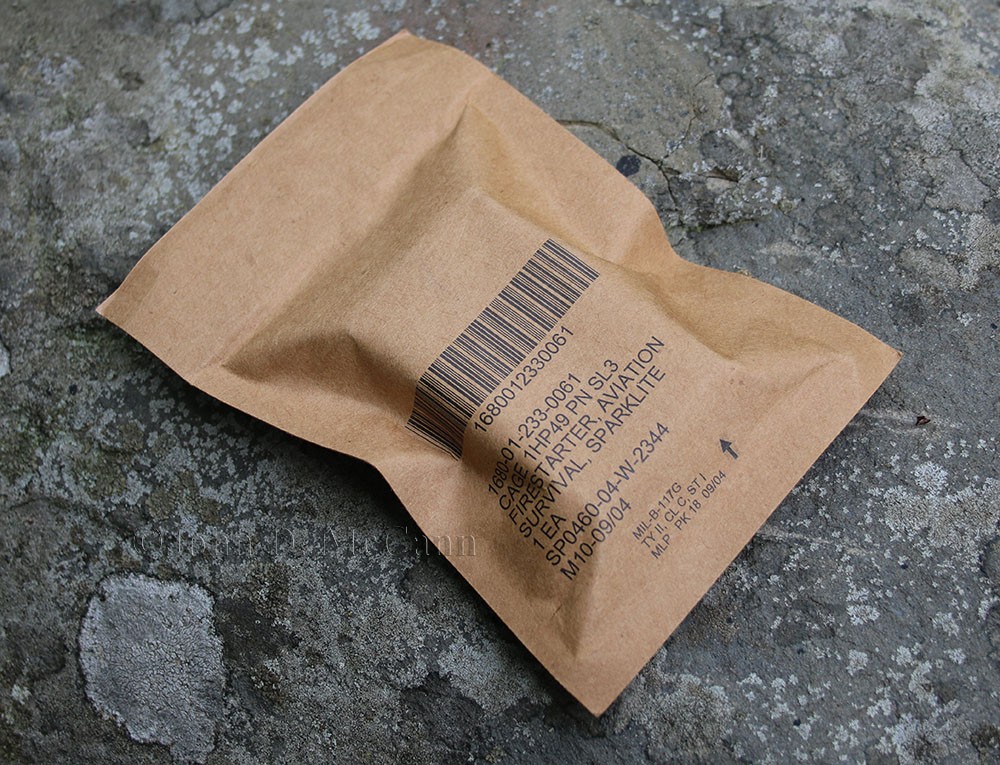 This is a view of the original packaging for the Spark-Lite Fire Starter for the military. I have a couple of these in my collection and will keep them sealed so they are original.

In 2007, Oak started working on a new Spark-Lite™, made from aluminum, and it has a small hex socket head screw on the bottom for replacing the flint, which can be removed with an Allen Wrench. He had some prototypes of this model made in anodized green and orange (looks brown). Unfortunately, initially, the manufacturing costs were too high. However, Oak was able to work with the manufacturer and was able to bring the cost down down, so they were finally available, and we immediately added them to the Survival Resources website. The following photographs show the aluminum Spark-Lite devices. 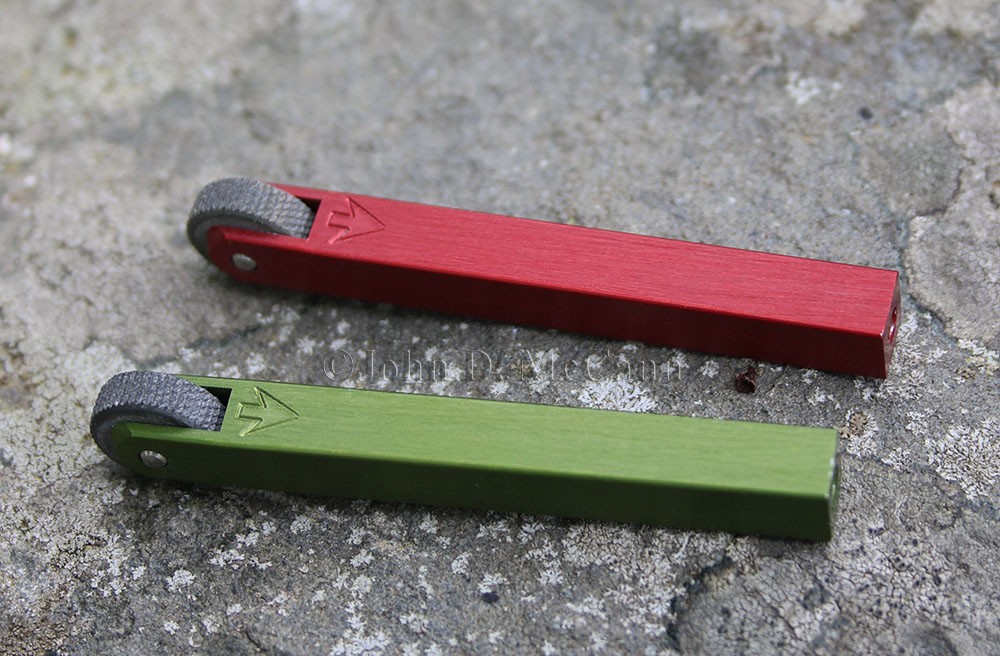 This is a view of the new Anodized Aluminum Spark-Lite Fire Starters. 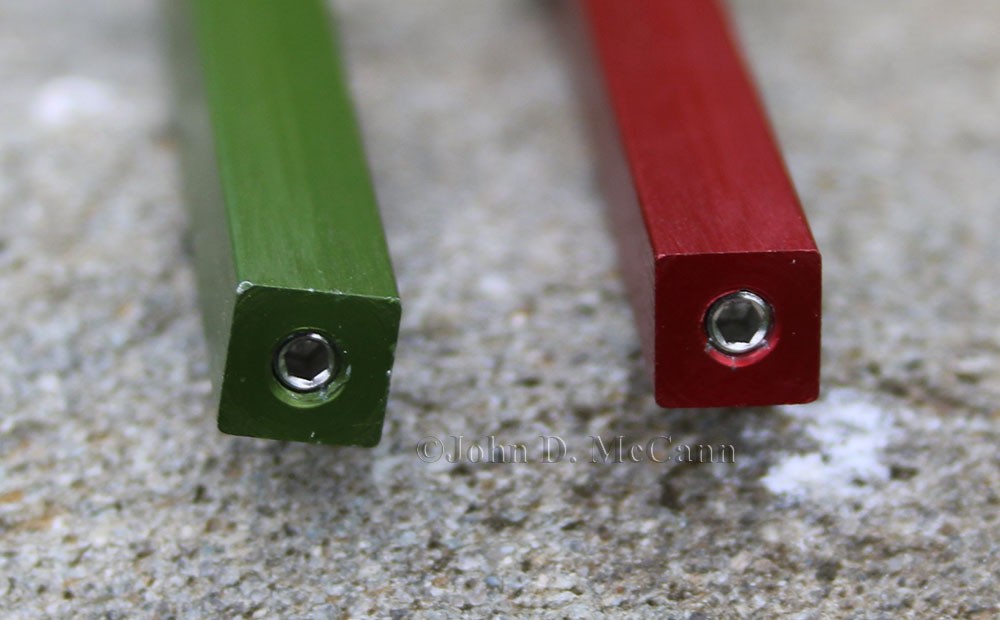 This is a close-up view of the hex socket head screws for replacing the flint in the aluminum Spark-Lie.
An Alan wrench is included for this purpose.

After having the aluminum Spark-Lite made and added to our product line, they became very successful. I asked Oak if he felt a brass model could be produced, as I really liked the old brass models. He felt they could, but again, he felt they would be too expensive to make. I felt they would sell and after a couple years with prototypes and working with various machine shops, Oak was able to get the brass Spark-lite produced at a price that would allow them to be offered at a reasonable price. We immediately added them to the Survival Resources website. They have also become a great seller. 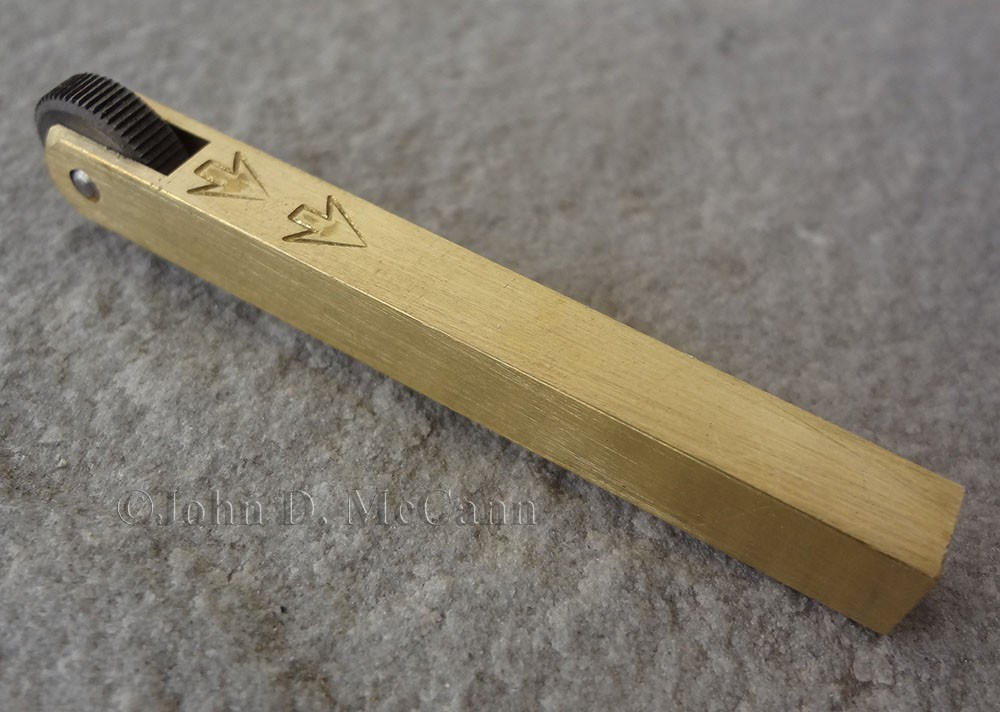 A close-up view of the new all brass Spark-Lite Fire Starter.

Quite a few years ago Oak gifted me will all the original devices he had, including a wooden prototype for the original one-handed Spark-Lite. 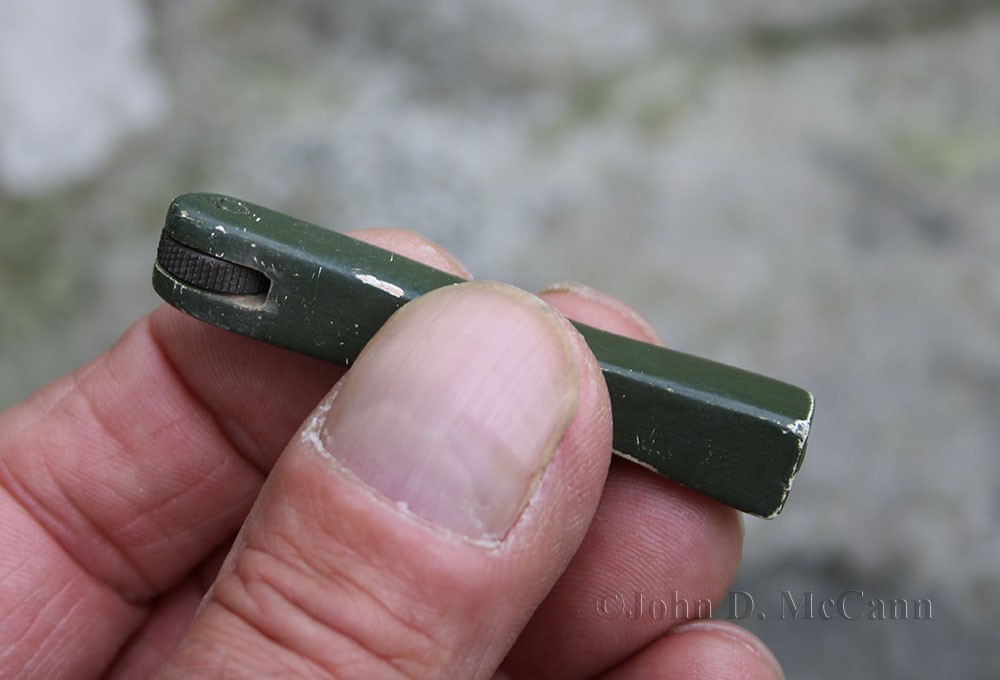 This is the original prototype of the one-handed Spark-Lite made from wood.

All of the original devices gifted to me by Oak will always hold a special place in my collection of fire-starting devices. As of 2008, Oak had sold the military over 200,000 Spark-Lites™, and approximately the same number commercially. The plastic Spark-Lite is available in either olive green or florescent (hunter) orange. The aluminum are available in anodized green and orange/brown. The new brass model is solid brass like the original unit. They all have a lifetime guarantee to ensure that customers will always be satisfied with the product. There you have it. The real story of the development of the Spark-Lite Fire Starter. Oak Norton, Jr. is in his mid eighties and is still going strong! Hope you enjoyed the real story!.

We are proud to sell all the the Spark-Lite Fire Starter models at Survival Resources. We hope you enjoyed this article and will help support our efforts by checking out our products. As always, Be Prepared To Survive!