Vitamin C is an important element to include in a regular diet. This powerful vitamin provides very important health benefits which the body needs to properly function. Because Vitamin C contains antioxidants it aids in fighting off all kinds of diseases, improves the immune system, and wards off inflammation, infections, and viruses.

You have all heard about poorly nourished sailors before the end of the 18th century getting "scurvy" which is a result of a deficiency of vitamin C. It caused swollen bleeding gums as well as the opening of previously healed wounds.

So how do we obtain vitamin C when out in the field? Well there are many edible wild plants that contain vitamins, including vitamin C. But one of the easiest ways to obtain this necessary vitamin is by making Pine Needle Tea, which contains 4-5 times the vitamin C contained in fresh squeezed orange juice, and has the additional benefit of being high in vitamin A as well.

What Type of Pine Tree Should You Use?

Most pine trees can be used for pine needle tea, but not all. There are some that are poisonous or toxic. Those you want to avoid include Lodgepole Pine, Monterey Pine, Ponderosa Pine, Norfolk Pine (Australian Pine), Loblolly Pine, Common Juniper, and although not a pine, Yew. Keep in mind that all pine trees are conifers, but not all  conifers are pine. Some of these mentioned have been known to induce miscarriages in cattle. While there is no documented evidence of pine needles causing human miscarriages, pregnant women are advised to not ingest pine in any way.

The various types of pines available have their own taste when used for tea so you will have to try various types to determine which type you like the  best. Although some like tea from Spruce, I prefer two types, which are my  favorites. They are White Pine and  Eastern Hemlock (yes hemlock is an evergreen tree from the pine family and should not be confused with poison hemlock which is a plant). I will show how to positively identify both.

When collecting needles for tea, the younger the better. You can tell the younger needles that are lighter green towards the ends. After removing, remove any of the brown (sheaths) ends. They are now ready to prepare for tea.

Some people find that pine needle tea can be bitter, and some can. I have found that a sweetener can help with the bitter taste. Some people prefer a little sugar but I like a little honey. My wife, Denise, and I carry honey in straws in our pack and it makes a great addition to pine needle tea.

My number one favorite is White Pine which is very easy to  identify. White Pine has five needles in each bundle, called fascicles. Collecting the needles for tea is easy and you don't have to damage the tree limbs to do so. Simply place your hand loosely around a small section of limb and slide it down the limb, gently stripping a handful of needles off the limb. 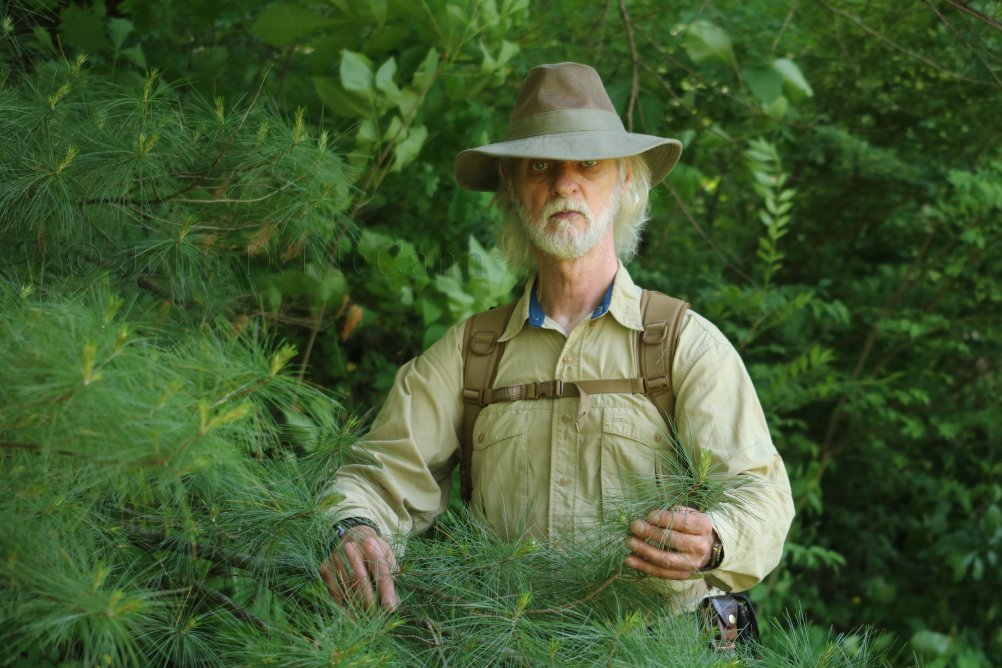 This is a view of me standing next to a White Pine which has been identified by the five needles in a bundle. 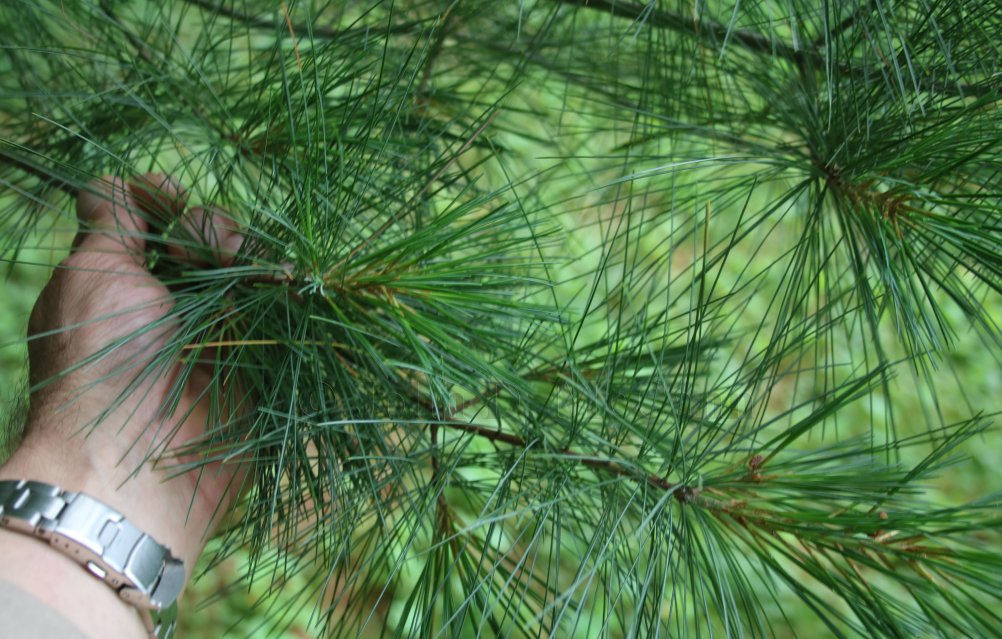 This shows my hand placed loosely around a small limb of white pine getting ready to strip off needles. 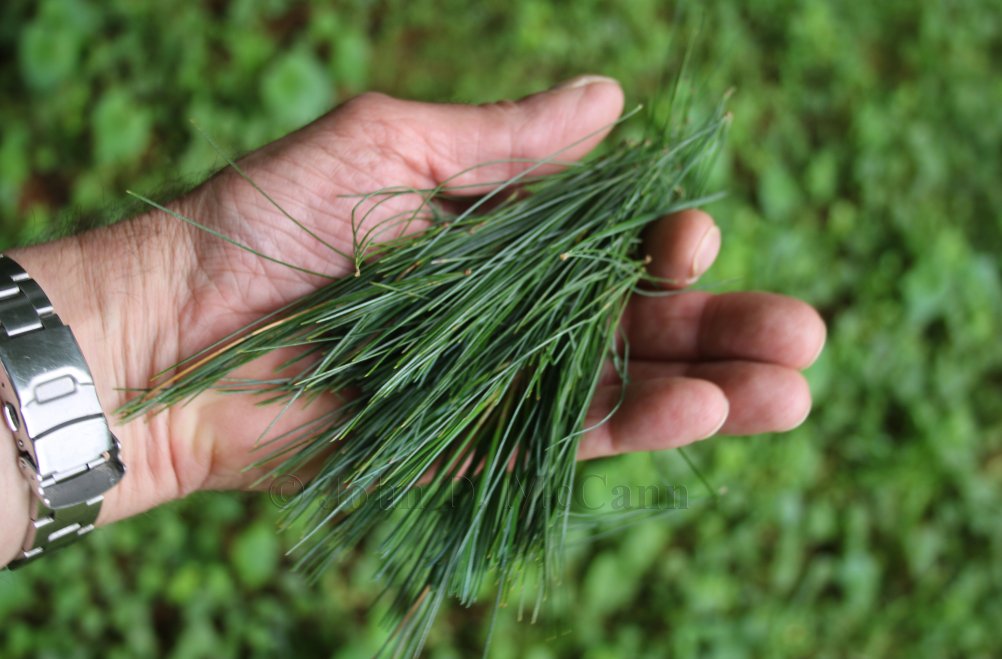 This shows a handful of white pine needles from one slide down a small limb. 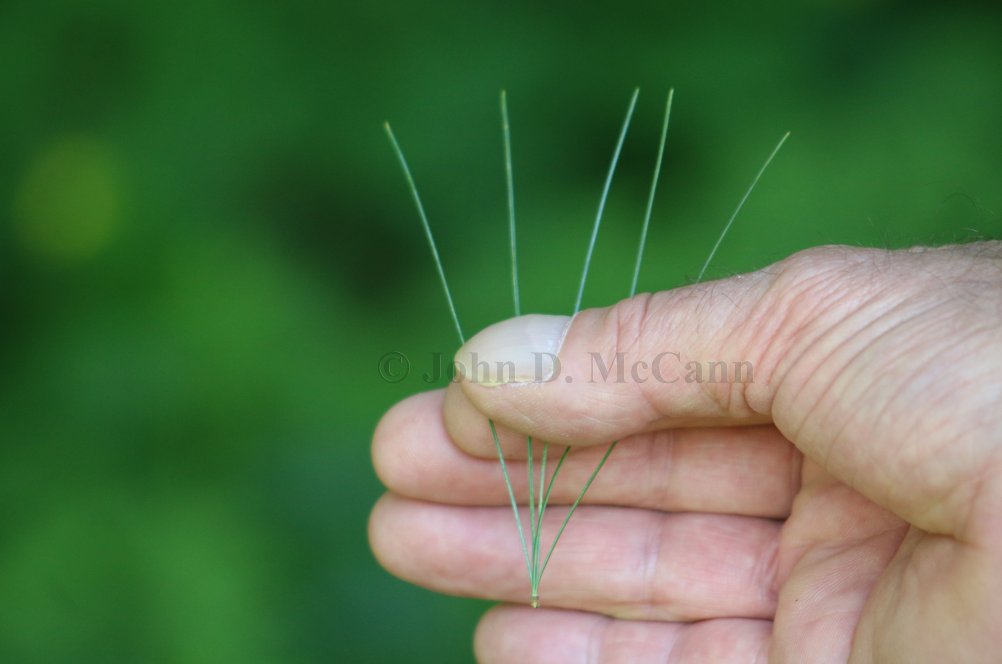 This shows the five needles of white pine in each bundle called a fascicle.

Eastern Hemlock is my second favorite pine needle tea, and is also easy to identify. Eastern Hemlock has needles that are flat and attached individually to the branch. What sets them apart from a Yew, which is highly toxic, is that they have two very distinct, creamy-white bands running the length of the underside of the needle. Also, their needles are rarely  more than one-half inch long. They are attached to the stem by a tiny petiole. You can use the same technique as used with white pine to obtain the needles. 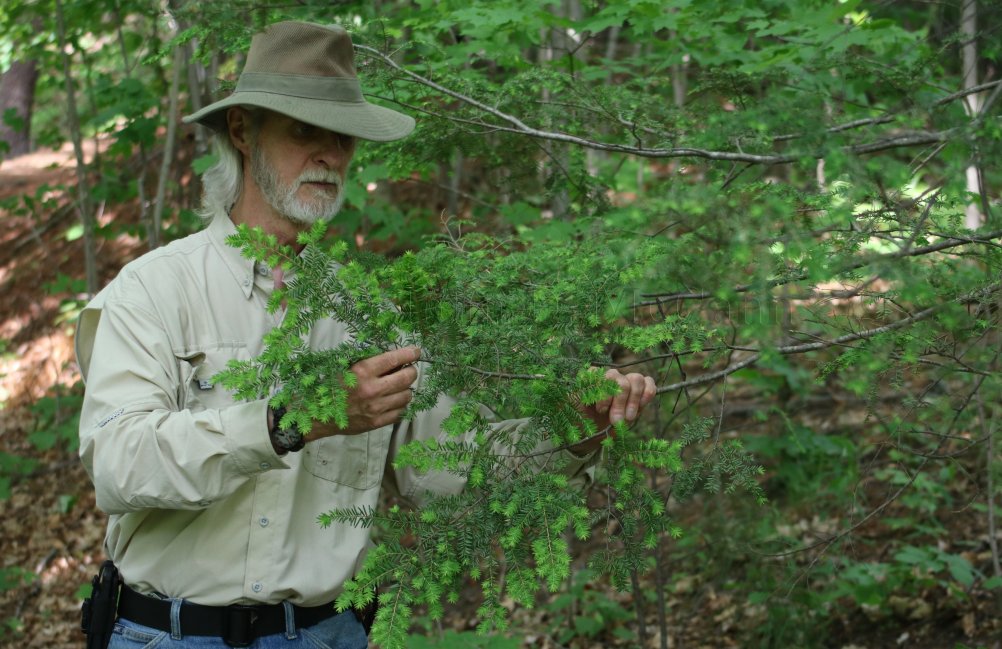 This shows me examining the limb of an Eastern Hemlock which has the light green new growth at the tips. 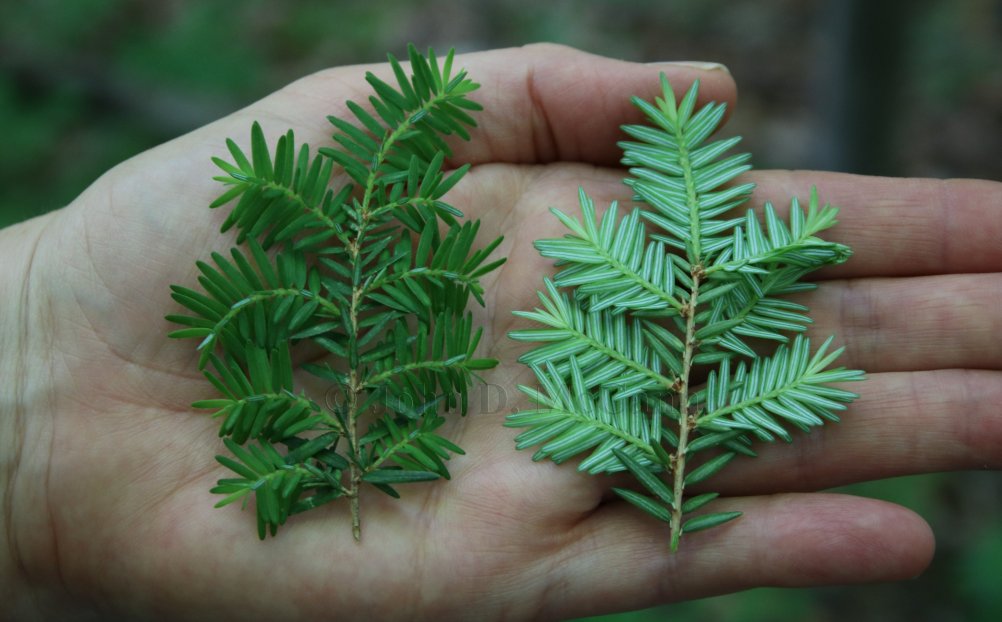 This shows the top of the Eastern Hemlock needles on the left, and the underside on the right. 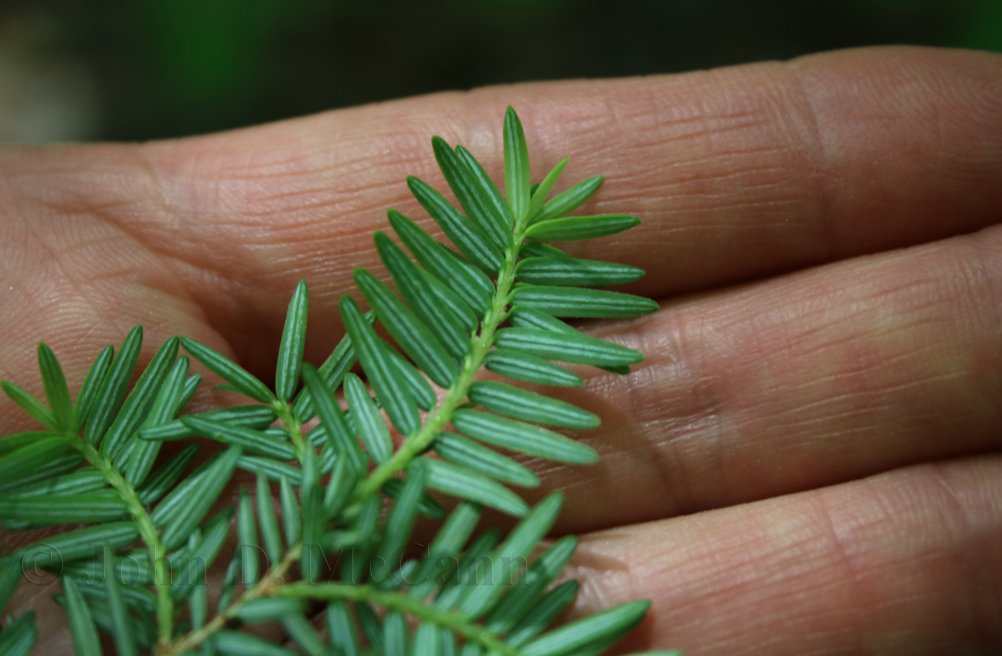 This is a close-up showing the creamy-white bands running the length of the underside of the Eastern Hemlock needles.

Preparing The Needles For Tea

Preparing the needles for making tea is a simple process. Simply chop them is small pieces, as the smaller the pieces the more vitamin C you will obtain. I have also heard of people mashing the needles after chopping, so that they provide  more vitamins, but I have never done this. In my opinion, if you chop the  needles into small pieces, it should suffice to adequately infuse the vitamins into the tea water. 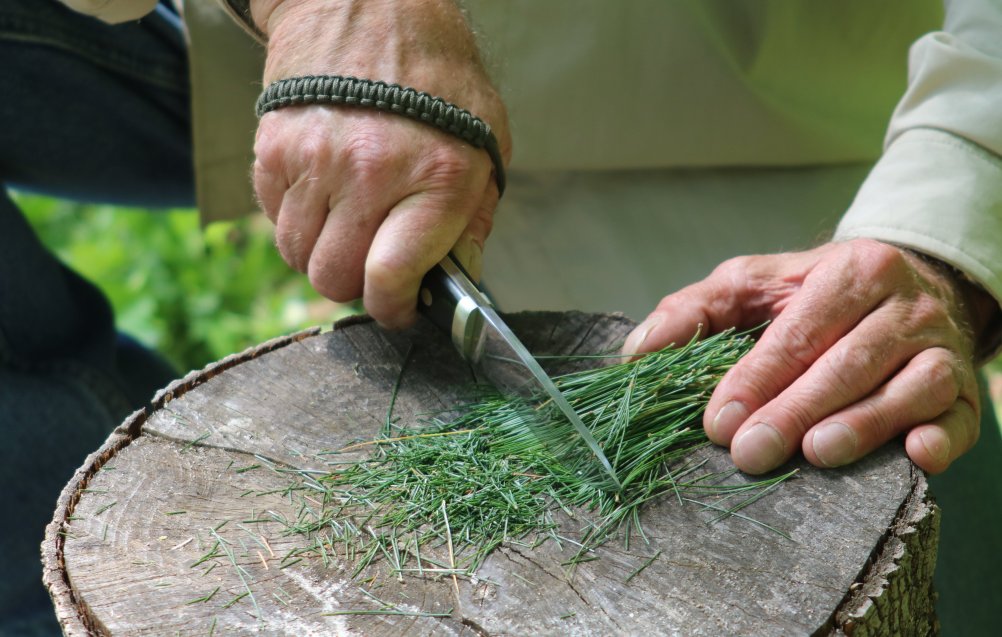 This shows me chopping White Pine needles into small pieces. 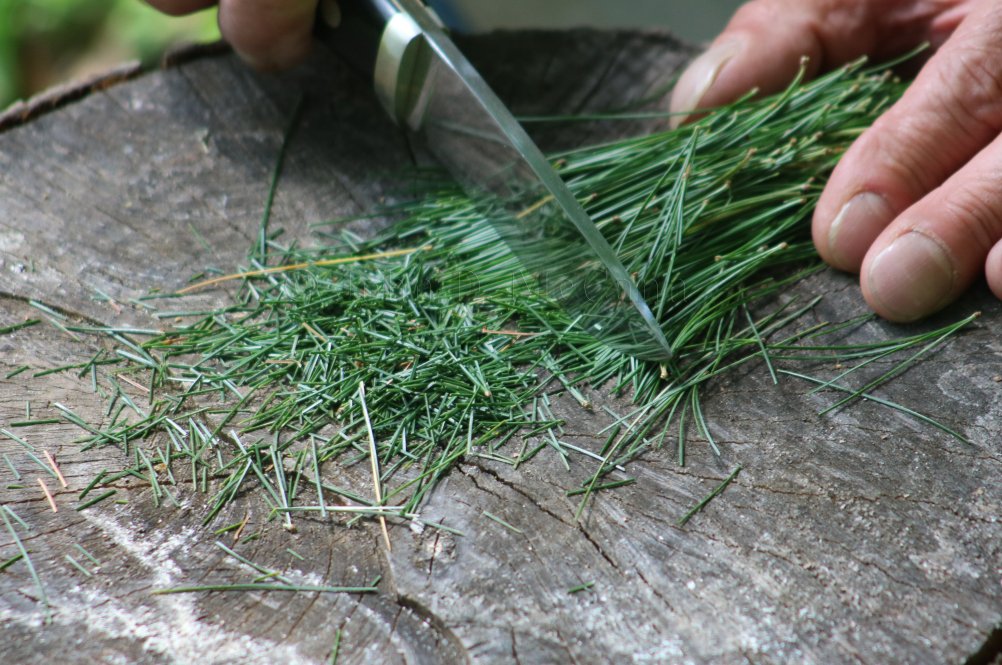 A close-up of the chopped White Pine needles. 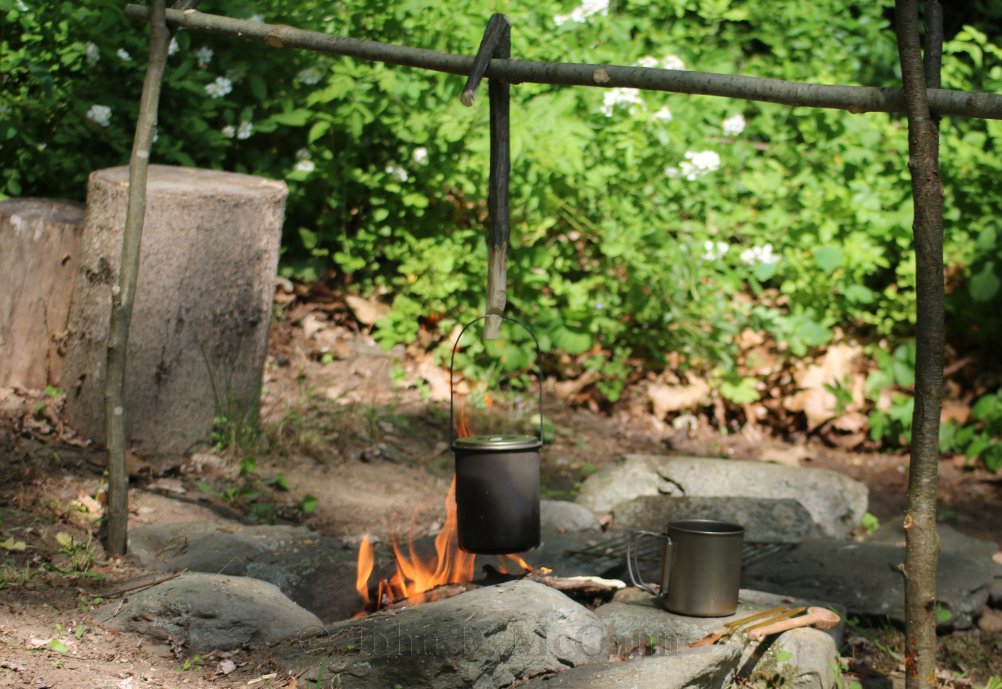 While your chopping the needles, get some water heated over a fire or a stove.

If you are going to steep the needles in hot water. You simply place a small amount, somewhere between a teaspoon and a tablespoon, into your cup. Pour hot water over it and let it set (steep) for about ten minutes. This is called a decoction, whereby the result is a concentration of the essence of the plant used. In this case, the pine needles and the essence being the vitamin C & A within them. 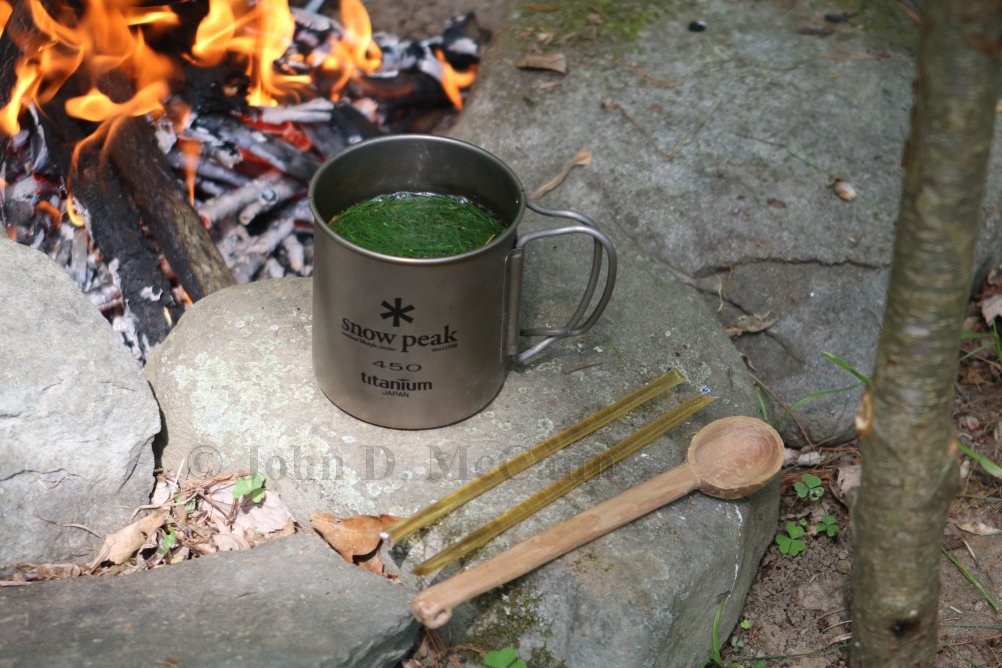 This shows the pine needles steeping in the hot water, with the honey straws standing by. 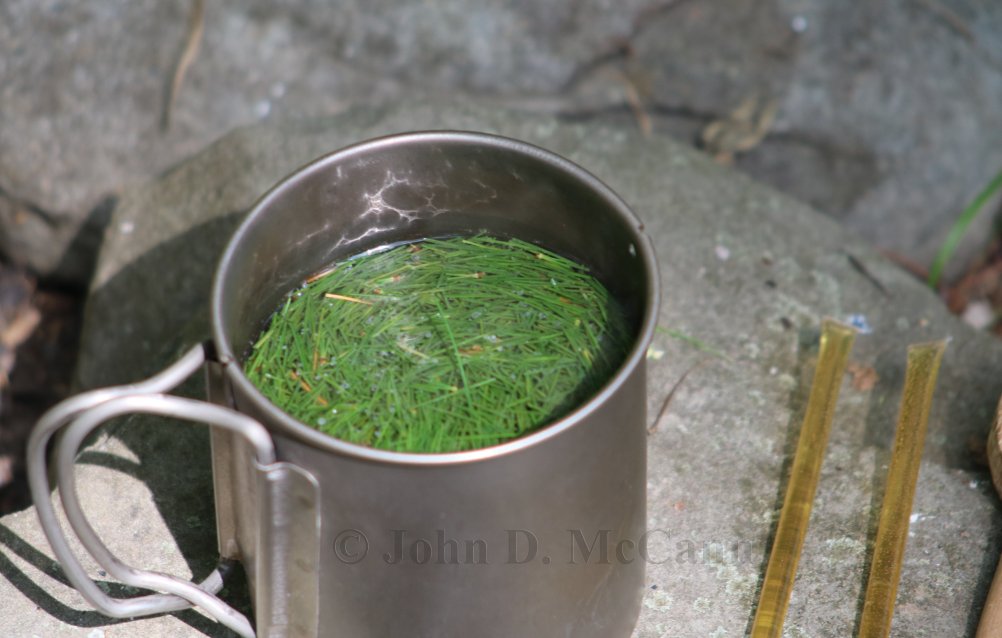 A closer view of the pine needles steeping in the cup.

I have heard various discussions over the years in regard to steeping pine needles vs. boiling. I did a video a few years ago called "Grab It When You Can" and as part of that video I discussed pine needle tea. I described how you could steep the needles in hot water, or as I have been known to do on occasion, just boil the needles in a pot. Well, I was told by an individual that boiling the needles destroyed the vitamin C in them. He actually stated that the vitamin C would not only be destroy in the plant, but could actually be boiled off into the air.

Obviously a little research was required on my part. This is what I have found out in regard to boiling pine needles for tea. I will address his second point first. The boiling point of water is 100º Celsius (212º Fahrenheit). The boiling point of Vitamin C is 553º Celsius (1,027.4º Fahrenheit). Therefore the boiling of water would never reach a temperature that would cause the vitamin C to be boiled off. Instead, the vitamin C would be dissolved (vitamin C is water soluble) in the water, which with a tea is what we are going to drink.

The next point is that when you cook vegetables in boiling water, you will leach a lot of the vitamins out of the vegetables into the cooking water. This is why my wife steams our vegetables, as opposed to boiling them in water. Again, in the case of pine needle tea, we are not eating the needles, we are drinking the water, which should now be full of vitamin C. 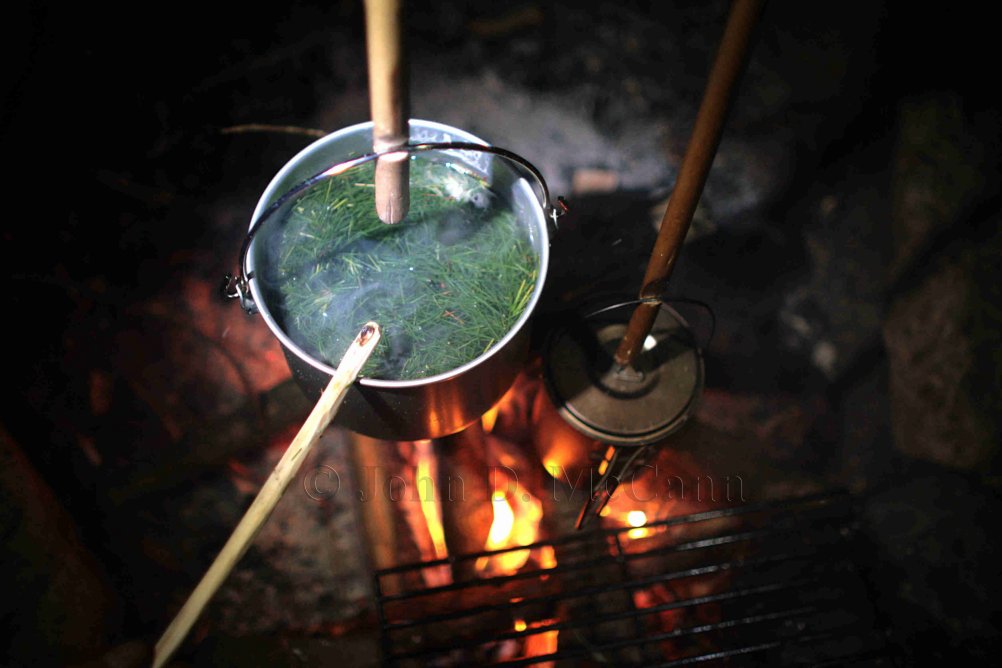 Boiling pine needles in water over a fire for tea.

In my humble opinion, you can steep your pine needles, or you can boil your pine needles. I have found that when they are boiled the water gets much more yellow looking which might mean it has more vitamin C in it. It should be noted that it is often more bitter as well. That's what our honey is for.

It should also be noted that pine needle tea has medicinal uses. It has often been used as an expectorant, a decongestant, and when cooled, an antiseptic wash.

The bottom line is vitamin C is important, and during a survival situation you can get a heavy concentration of it by making pine needle tea. I have both steeped and boiled pine needles and it is always a pleasant warm drink, especially on a chilly night. Give it a try and stay healthy when in the field.

Warning: As with all wild plants, ensure that you have 100% correctly identified the plant as edible, before ingesting it. When in doubt, be prudent and leave it alone! Again, While there is no documented evidence of pine needles causing human miscarriages, pregnant women are advised to not ingest pine in any way.