While on a 10 day trip to the wilderness canoe area of the Adirondacks in New York, I though it might be fun to build a Natural A-Frame Shelter. Normally, I would use saplings to weave between the side uprights, however, it is illegal to cut saplings in the Adirondack Park. Being there are so many birch trees in this area, I though birch bark might make an interesting substitute for weaving the sides. Here is how the project went.

First, I located an area that was flat, sheltered and had good drainage. I knew I wanted the opening facing east and the rear of the shelter facing west. Once a suitable location was found, I began looking for a ridgepole and two uprights. Oftentimes, when building this type of shelter, you can use an existing stump or fork in a tree to support the ridgepole, but because of the location chosen, uprights would be needed to support the ridgepole. Also, when building a Natural A-Frame shelter, you want the completed shelter to be just large enough to get into in order to be able to warm it with your body temperature. A mistake often made when building a shelter is to make it to large and your body can't heat it.

Two suitable uprights were found and lashed together. It took a little longer to find a ridgepole that was "down-wood" but still strong enough to support the structure. Once the ridgepole was laid over the crossed uprights, the size was checked to ensure it was large enough, without being to large. 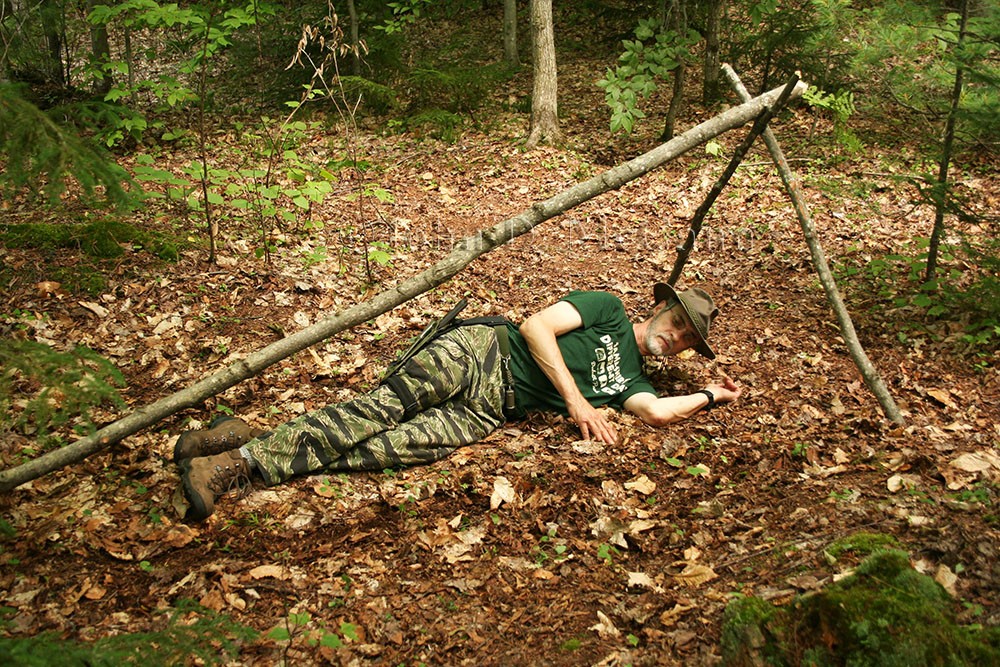 Checking the length of the ridge pole to ensure it is long enough before starting. 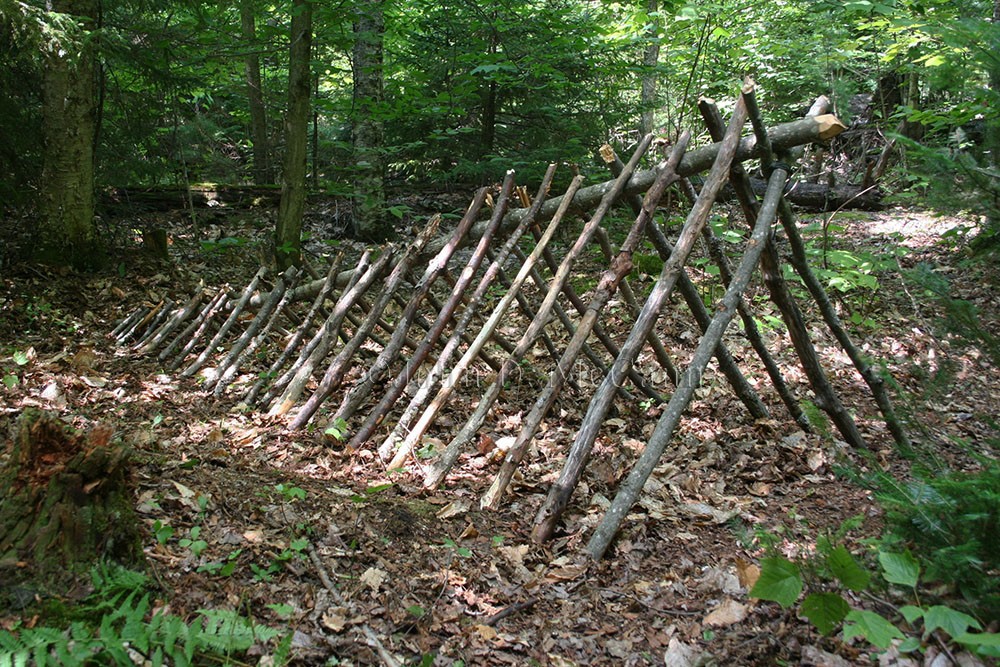 Sticks of varying lengths added to the sides.

The next step is to weave small sticks between the upright sticks in order to start filling in the sides. Usually, small green saplings are best for this as they bend easily without breaking. However, because you are not permitted to cut live saplings in the Adirondack Park, it was difficult trying to use dead branches for weaving, as they kept breaking. At this point I had observed a large white birch which had fallen down, and I got the bright idea of harvesting birch bark strips, and weaving them into the sides. It worked like a champ. 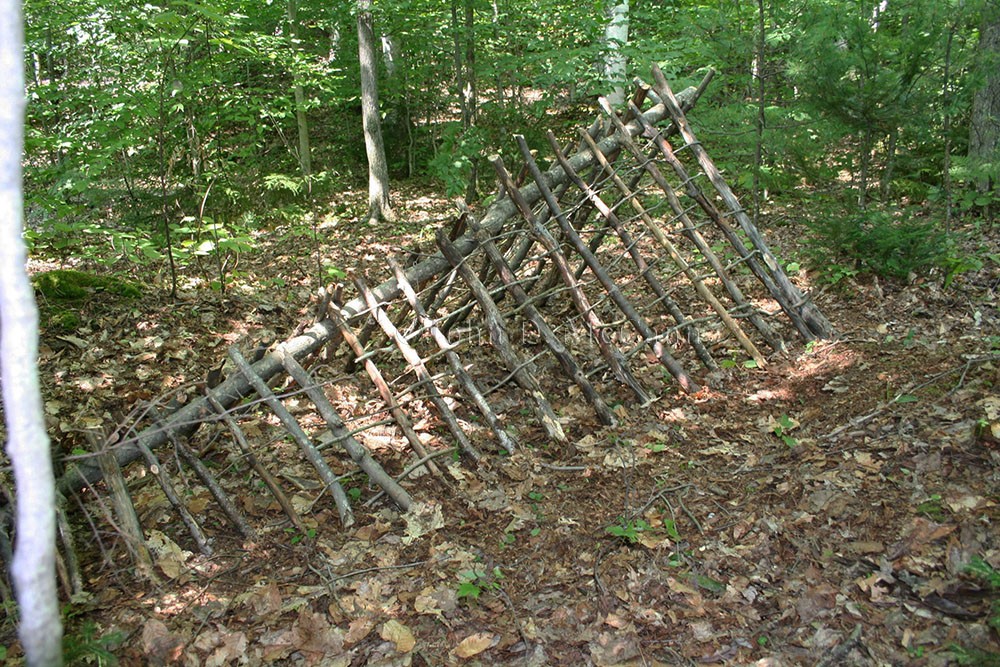 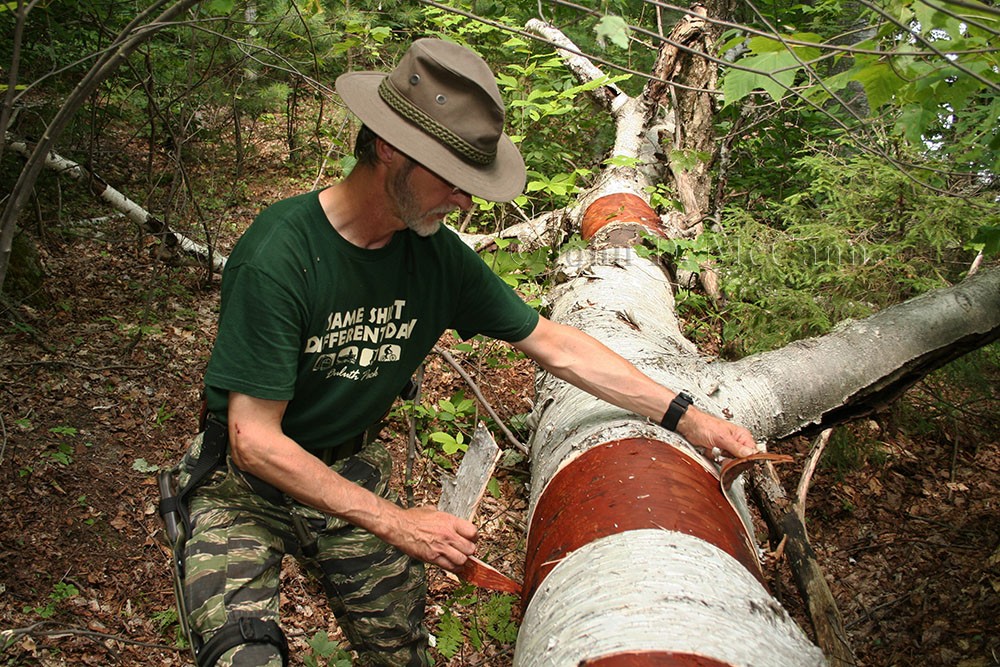 This shows me harvesting birch bark to weave into the sides. 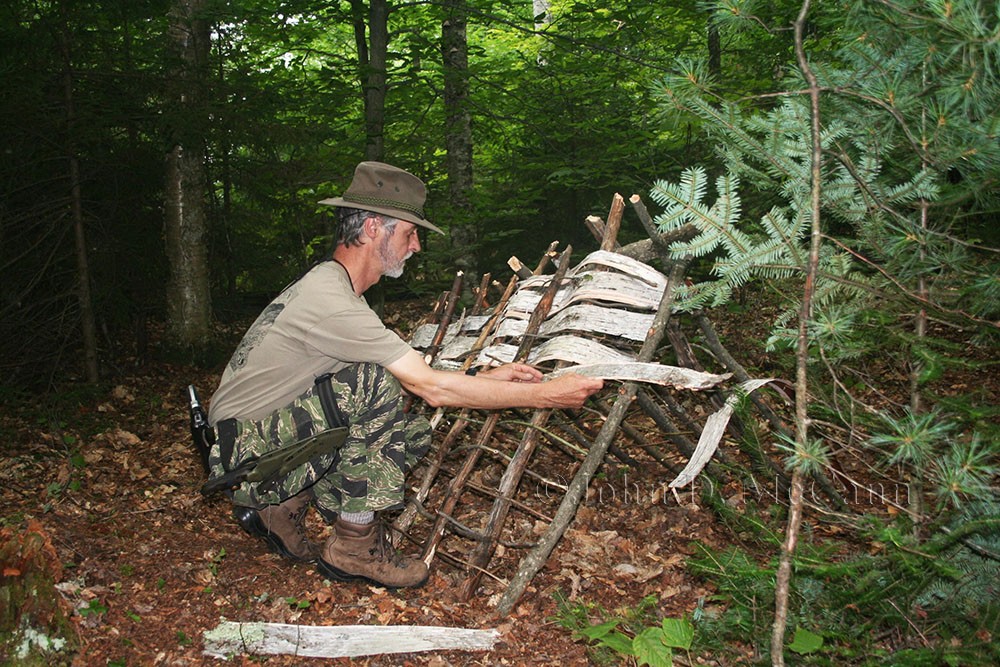 This shows me weaving birch bark into the first side. 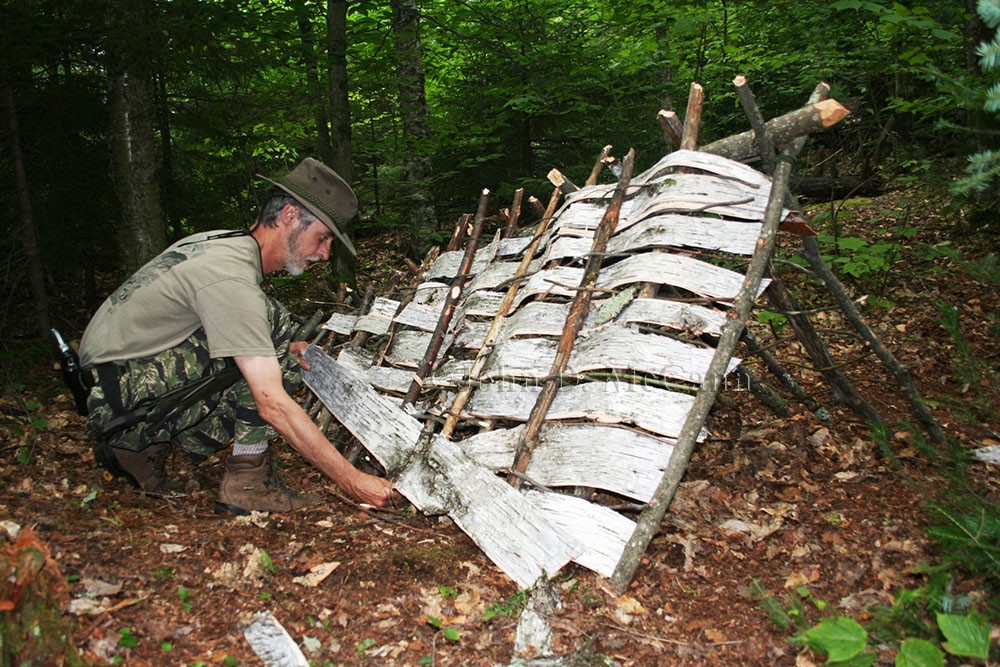 This shows me finishing the weaving birch bark on the first side. 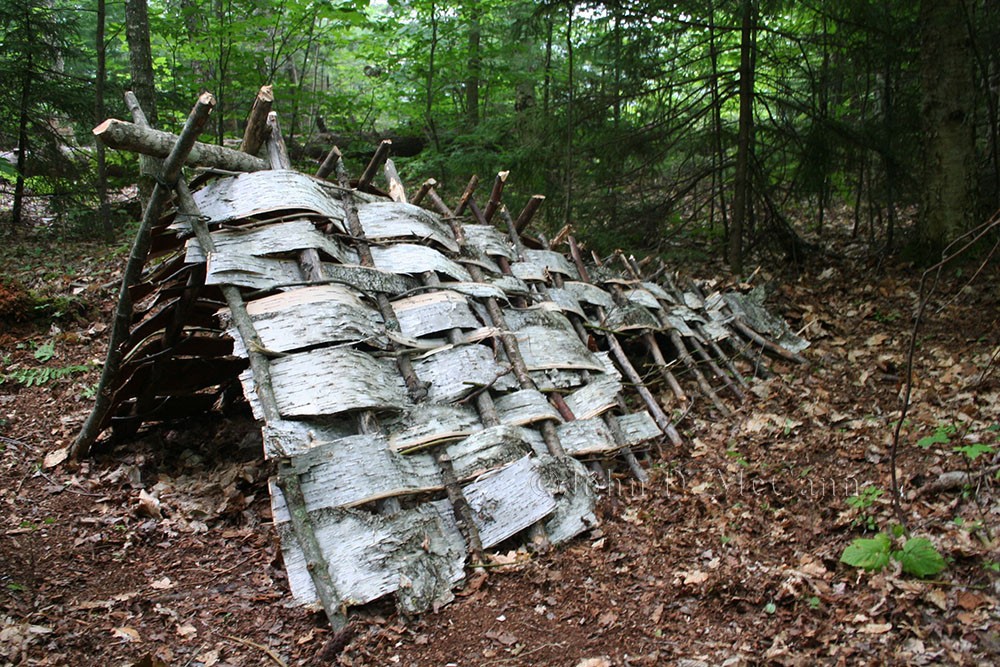 This shows the other side being being woven with birch bark. 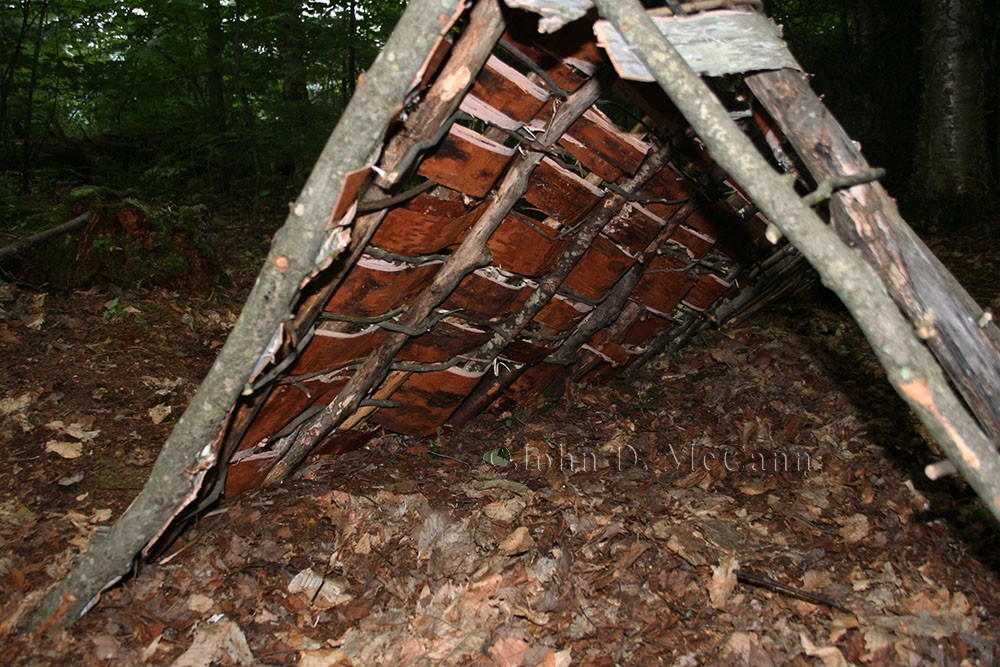 Inside view of woven birch bark. 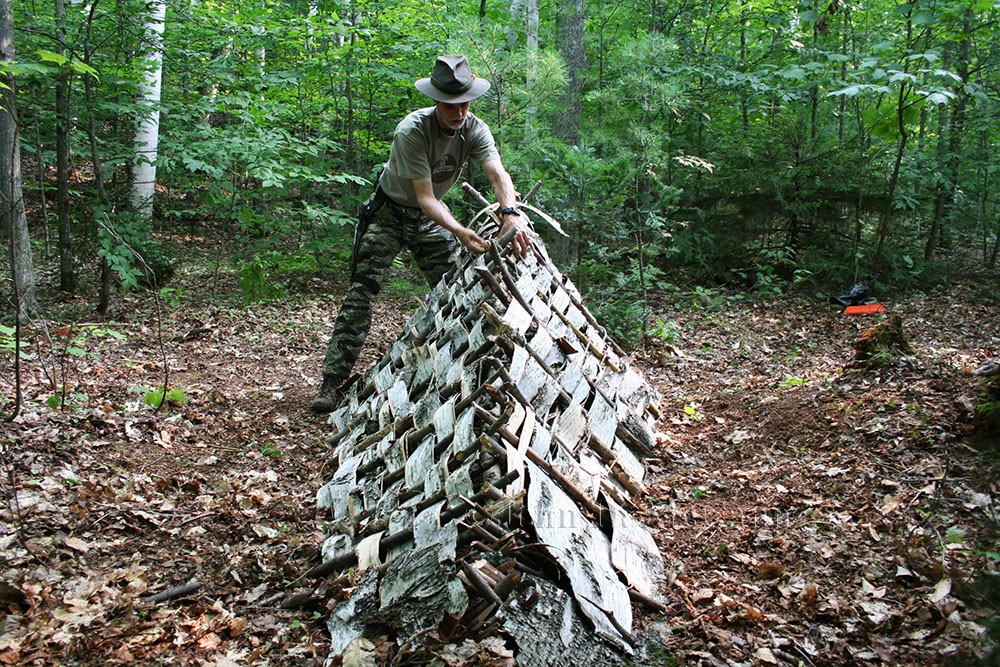 This shows me weaving birch bark over the ridge line. 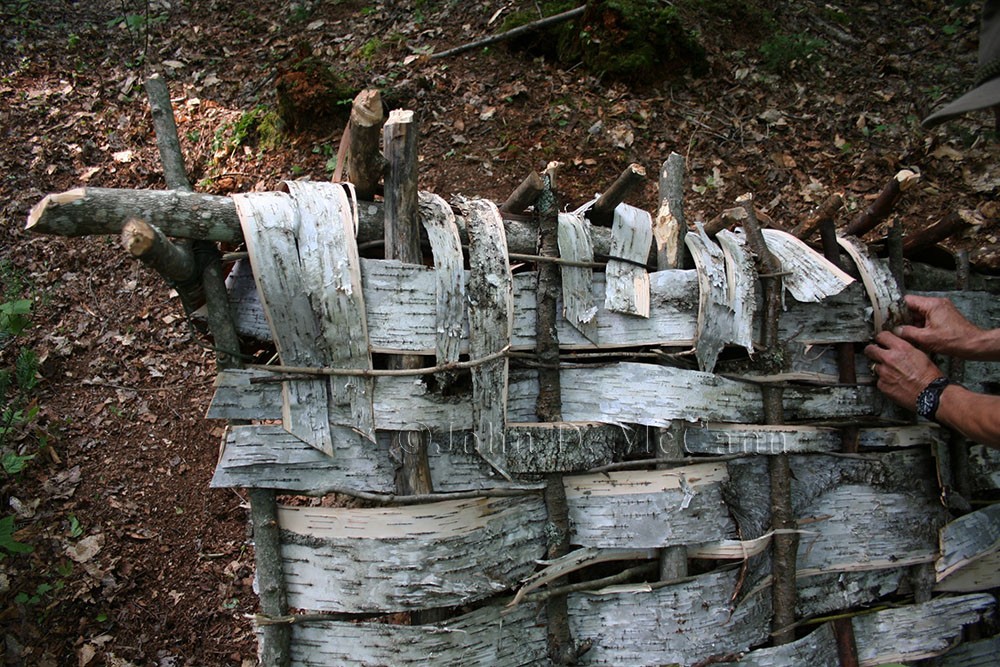 The next step was to cover the entire structure with 2-3 feet of leaves. This was not an easy task, as the forest floor did not have an over abundance of leaves (especially in July). It did take a lot of effort and motivation as the forest floor was raked using both hands, and fingers as rake tines. I was amazed at the amount of time it took, and how much forest floor that had to be raked in order to get enough leaves to complete the shelter.

This might have been a better project for the fall, but a survival situation can occur at any time, and you have to be willing to put forth the effort necessary to survive. 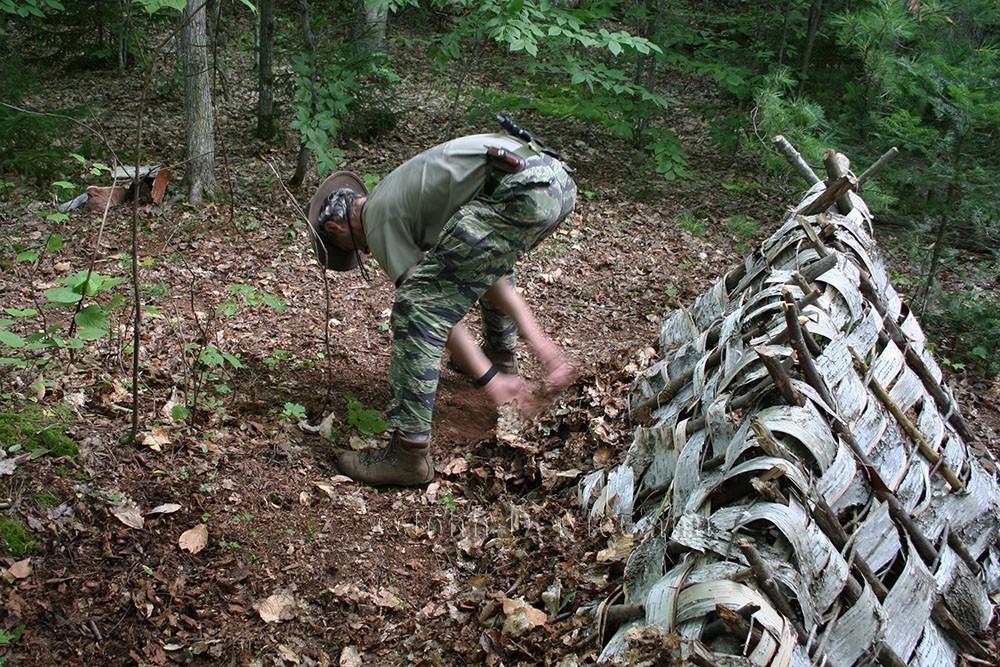 Initial leaves being thrown between legs. 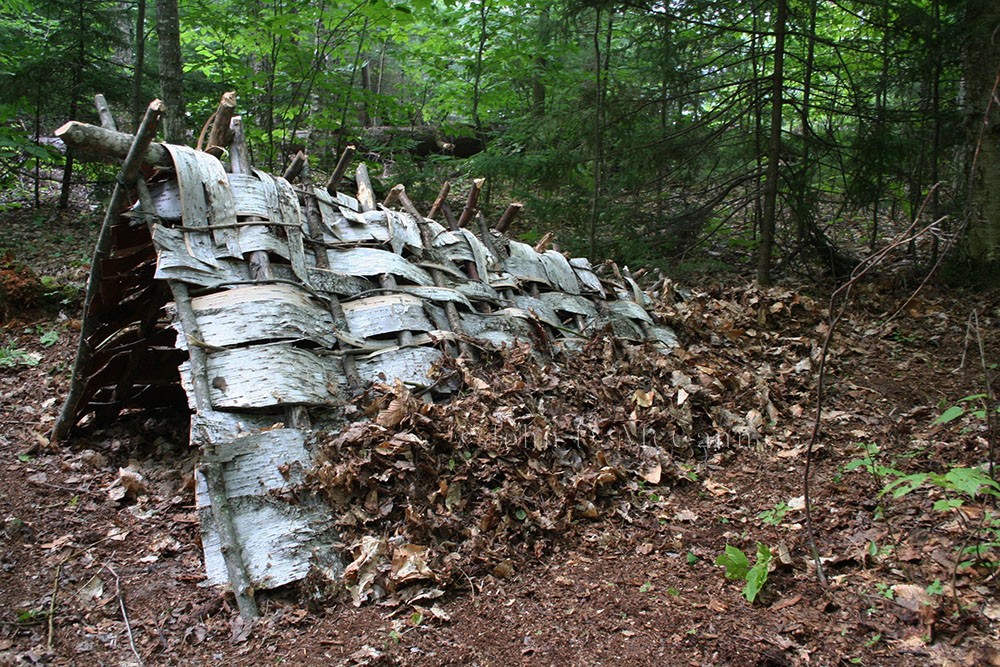 Leaves starting to cover the first side. 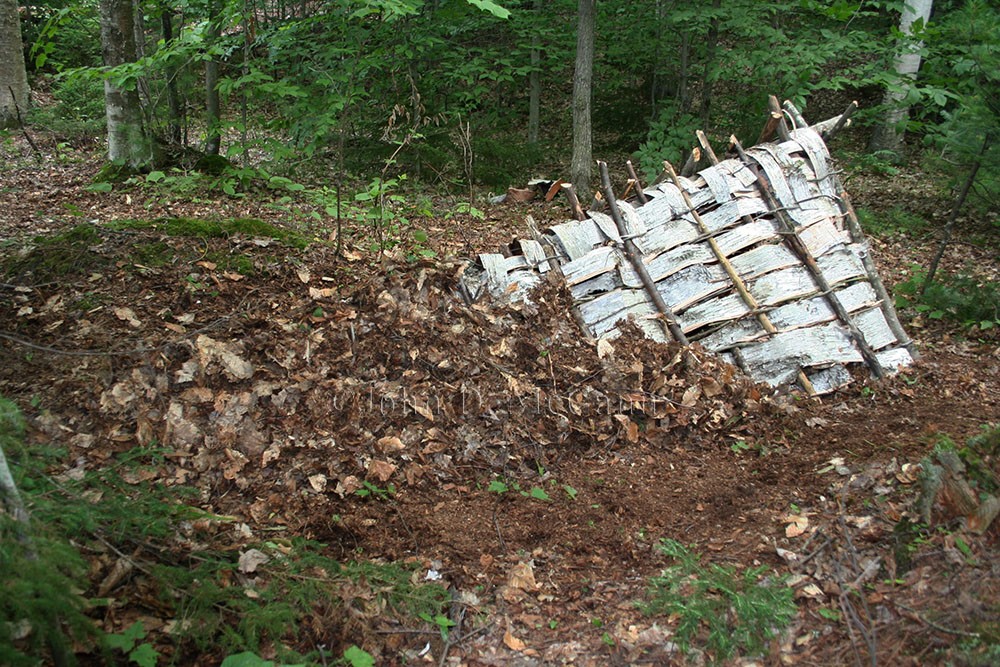 Leaves starting to cover back side. 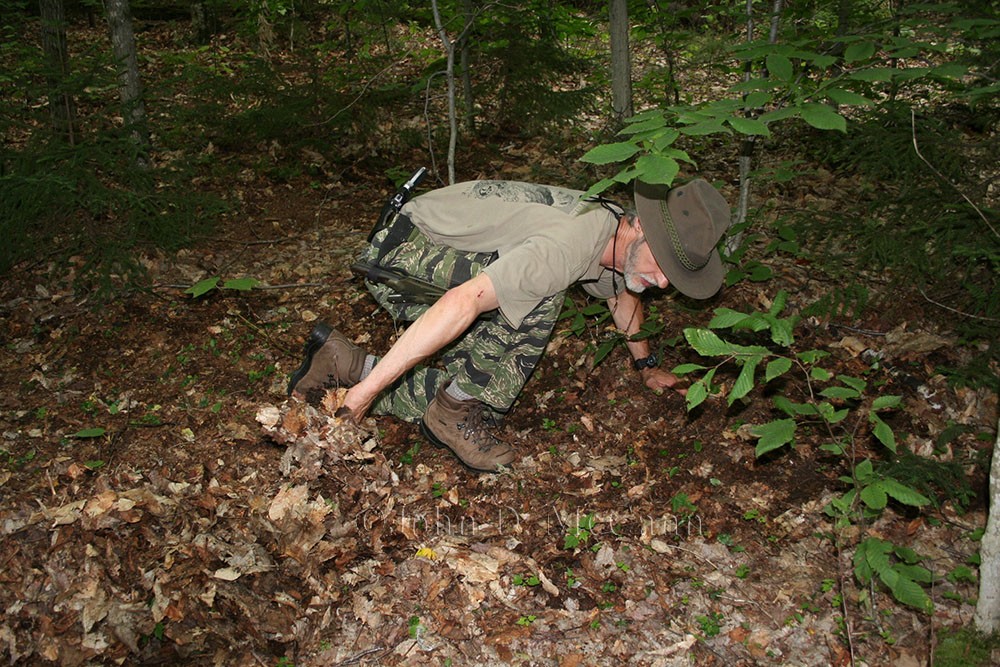 This shows me gathering leaves from the forest floor. Once a pile was made, they were carried to the
shelter using a large survival blanket. 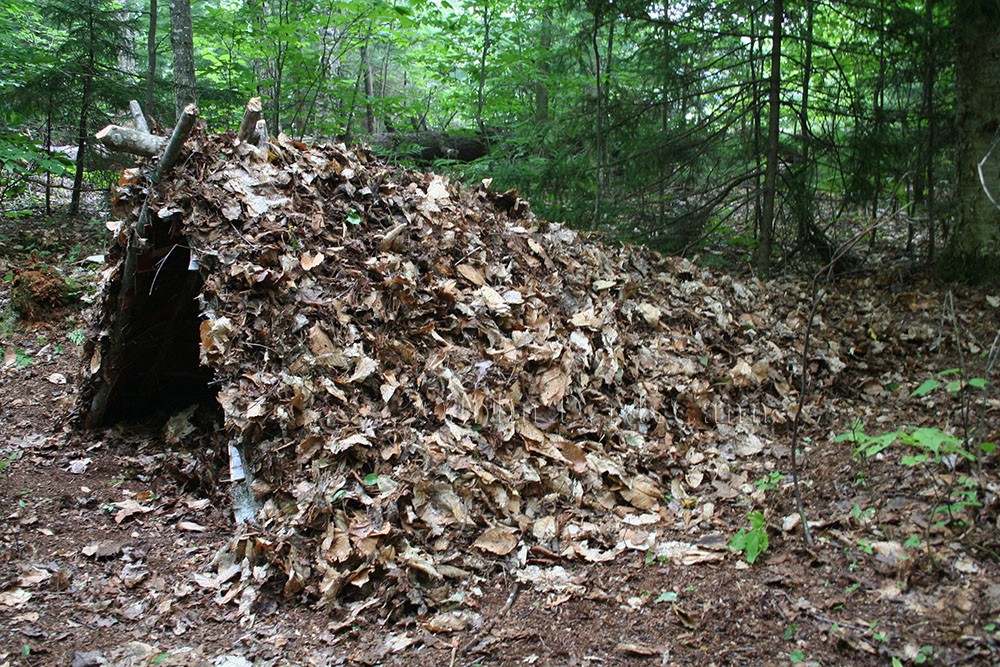 Leaves starting to cover one side. 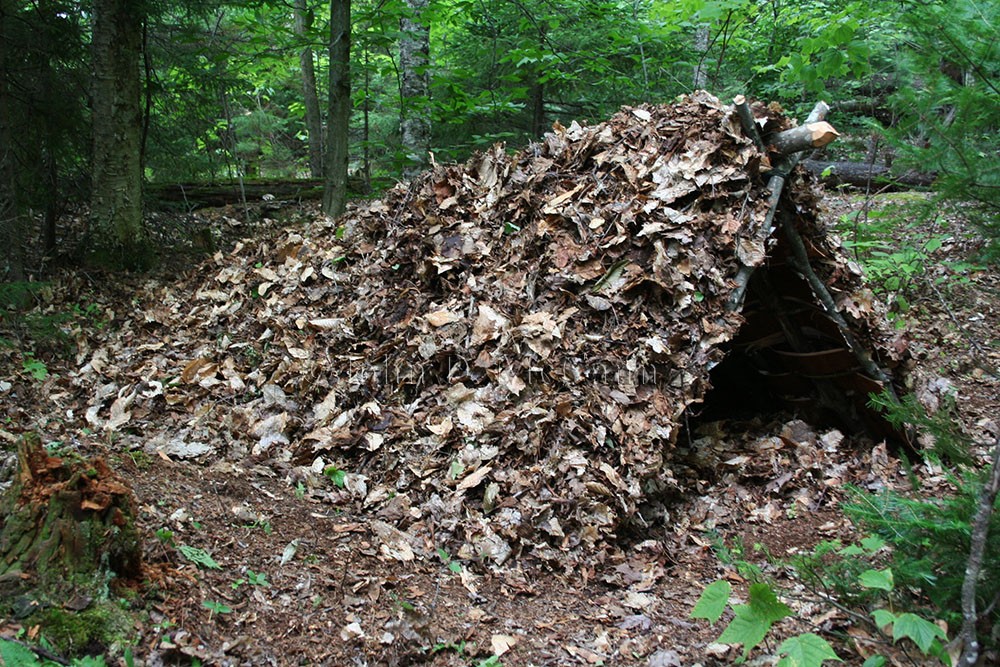 Leaves starting to cover the other side.

It took a lot of leaves to build the outside up to approximately three feet thick, and then collect more for the inside. When placing leaves inside, keep getting inside and packing them down, and then add more. One is better off spending the extra effort when building the shelter, than have your leaf bed compact in the middle of the night. 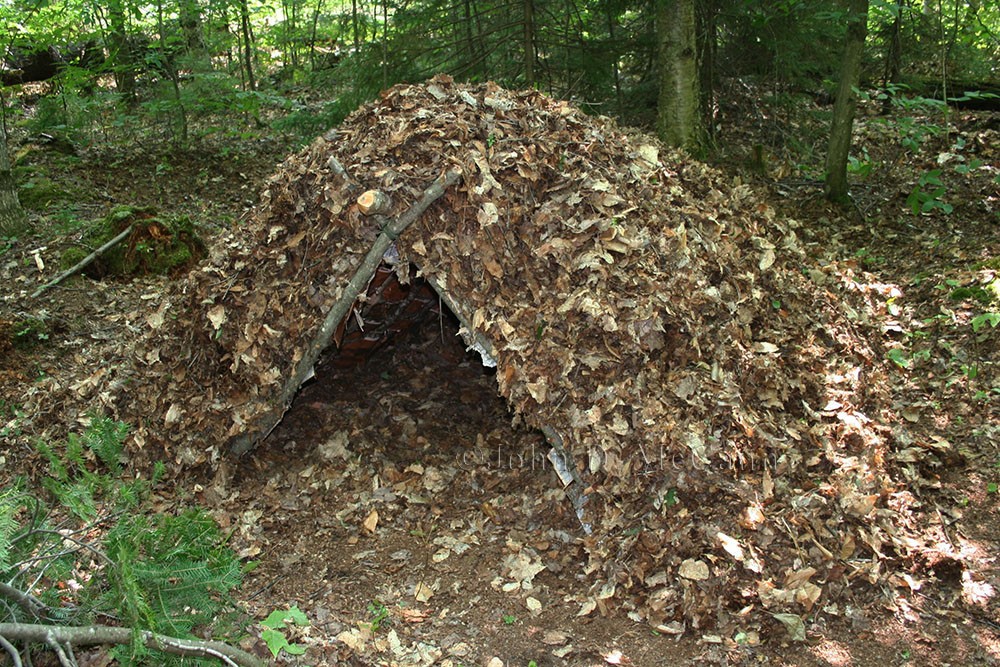 This is a view of the completed shelter. 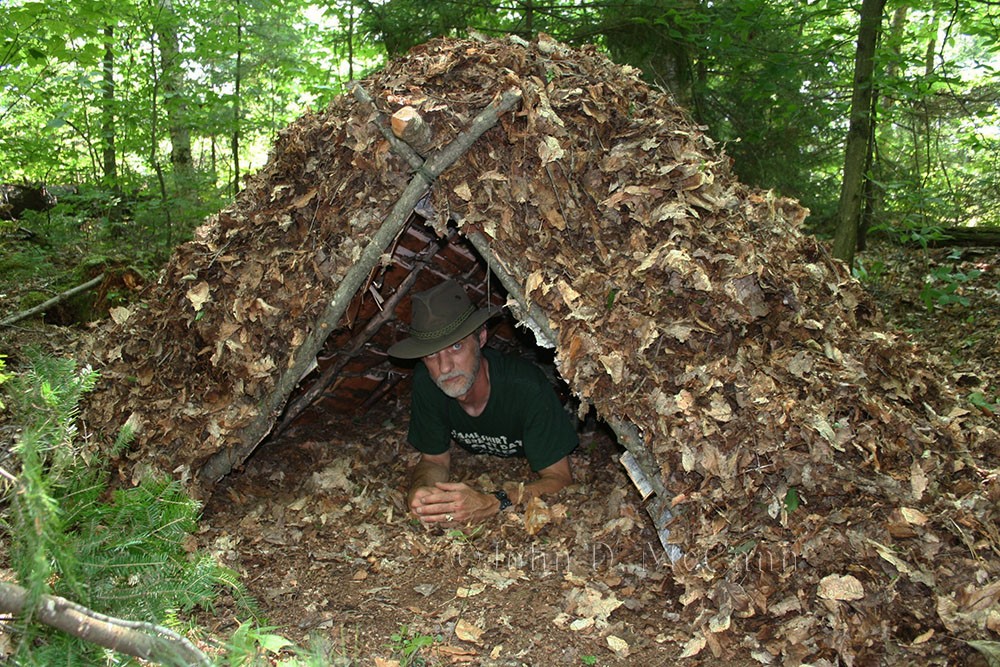 This shows me testing it out.

All in all, the shelter came out great. For added water proofing, you could add a survival blanket or two over the ridgepole, after adding some leaves, but before adding them all. You can also cover the entire shelter with a heavy duty survival blanket and hold it in place with logs. 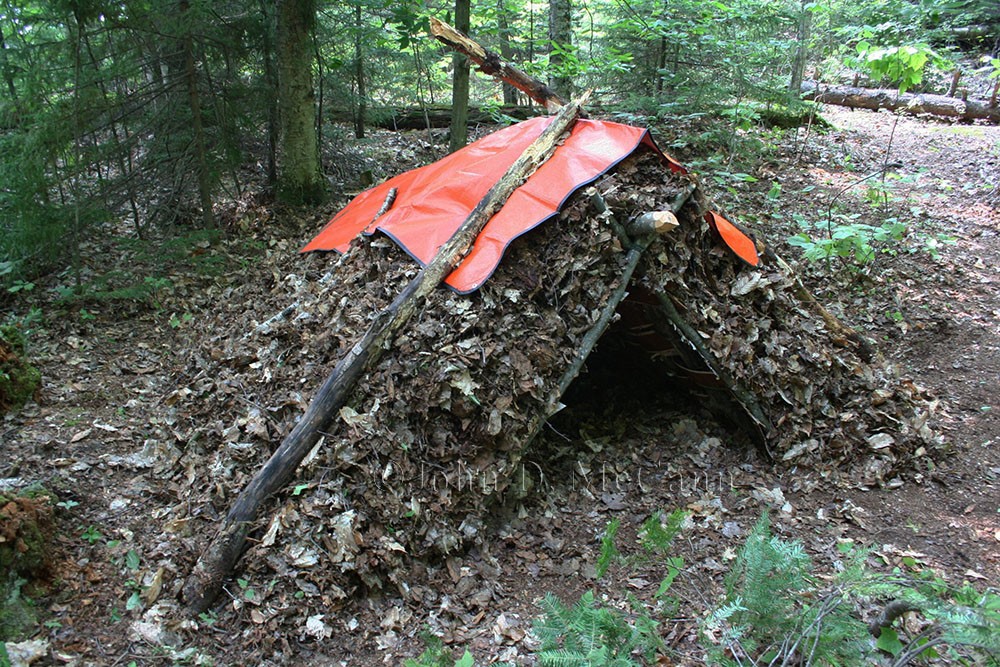 This shows a Heavy-Duty Survival blanket over shelter for additional rain protection, being held in
place by larger logs.

A survival shelter is a work in progress. Keep improving on it each day and it will keep you safe and warm. Good luck on your shelter building from the North East woods!