When using a compass, it is often necessary to go a certain distance in a given direction, and you would like to have a general idea of how far you have traveled. A way to measure distance is pace counting. It takes two steps to make a pace. When walking, always start out with your left foot, and count every time your right foot hits the ground. That means that you have taken two steps and that is one pace.

In order to do this, you will need a good estimate of your pace, in length. Figuring out the length of your average pace is easy. Measure a known distance of 100 feet to 500 feet (the longer the distance, the more accurate the estimate), and mark the beginning and end with a stick in the ground.

Now walk the known distance (in this case a100 foot distance) being careful to walk normally. Count your paces (every 2nd step) from the first stick to the last, and record that number. Now walk from the last stick back to the first, again counting your paces. Compare these two numbers (they should be close if you walked normal). If they are not even close, you should do the exercise again. When the two numbers are close, average the two, such as 17 paces in one direction and 19 paces in the other. If you add the two together, 36 paces, and divide by two, your average pace would be 18 paces every distance of 100 feet.

At the survival school I used to run, we placed three flags in the ground. The first was the start flag. The second was placed 100 feet from the first, and the third 100 feet from the second flag. Students would count their paces from the first flag to the second, and record that number. They would then count their paces from the the second flag to the third, and record that number. They would then turn around and do the same in reverse. This provided them with four numbers which were added together and divided by four. This provided them with a good average of their pace over a distance of 100 feet.

So how do we record the paces we have taken? There are various ways, such as carrying a bunch of small stones in one pocket. Every time you walk one hundred paces, move a stone from one pocket to another. However, there is a better way and they are called Pace Beads.

Pace Beads are not a primary navigation tool, but a supplemental one. They are used to count your paces so you will  have a general idea of how far you have traveled. You can see a set of pace beads hanging from the my day pack strap in the photo below. Note that the military distance is based on meters, and this can also be calculated. I like to use feet so I can easily determine miles traveled.

Pace Beads usually have four beads at the top, and nine beads at the bottom. If you know your pace is approx. 5’, you know that every 100 paces, you travel approx. 500 feet. So every 100 paces, you pull  down one of the beads from the nine-bead group at the bottom. After all nine have been pulled down and after the next 100 paces, you pull down a bead from the four-bead group at the top, which means you have traveled approximately 5,000 feet (a mile is 5,280 feet). You then pull the nine-bead group back up and start over. After the next 5,000 paces, conducted as described above, you pull down another bead from the four-bead  group at the top, and you have now traveled 10,000 feet. You continue in this manner, pulling the nine-bead group back up when they are depleted. When the four-bead group is depleted, and you have traveled 20,000 feet, start over with all beads. 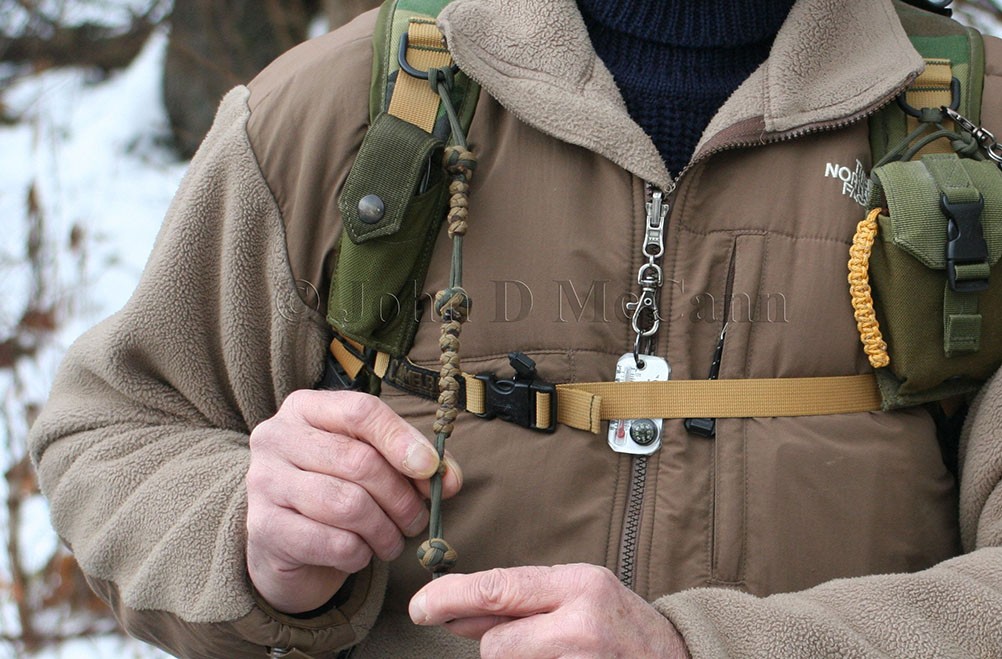 This shows my pace beads which I hang from one of my pack straps. You can see me pulling the first bead
down from the nine bead group at the bottom which shows I have traveled 100 paces.

Now leave about an inch from the bottom of the fourth bead and tie another knot in the two strands. Weave nine beads on the lower portion. Leave about another inch and tie a knot. You now have a workable set of Pace beads. I have found that the plastic beads that you buy in a craft store break easily in the field. I started using plumbing washers as they are made from rubber, never break, and provide good resistance on the cordage.

This shows a simple simple set of pace beads made with parachute cord and plastic craft beads.

This shows a set of pace beads I made using plumbing washers.

This is a custom set of pace beads using nothing but parachute cord for both the strands and the beads.
It was made by, and gifted to me, by my good friend Brian Manning of Snow Walker Outdoors.

While pace beads only provide you with a general or approximate distance, they can help you determine approximately how far you have traveled. If your map indicates that a body of water lies 2 miles ahead, and you have traveled 3 to 4 miles without seeing it, you know you are probably not traveling in the right direction.