Even though I have plenty of garden space on our  property, I always wanted to build a raise bed so I could use it for salad greens, and just to experiment. I also wanted the option of being able to use the raised bed as a hoop house, for either plastic or netting. But I wanted to be able to remove the hoops with ease. With the option of the hoops, I could use the raised bed as my needs, or the season, required. This would allow me to extend the growing season on both ends, and if I planted strawberries, or anything that birds would desire, I could use the hoops for netting. If the hoops were not required, they could be stored and the raised bed could be used normally.

I determined that the size of the raised bed would be eight feet long and three feet wide. Some like a raised bed four feet wide, but I felt it would be easier to reach the center from both side with a three foot width. Wanting the raised bed to be substantial, I started out with three eight foot 2" x 12" pressure treated lumber (which is actually 1-1/2" x 11-3/8"). Two would be used for the eight foot length, and the third would be used for the two end pieces. The end pieces were cut at 39" to accommodate the side thickness of 1-1/2" on each side.

I also cut eight pieces of 2"x2" pressure treated lumber (which are actually 1-3/8" x 1-3/8") to be used as stakes to secure the box to the ground. They were cut into 18" lengths and one end was cut at an angle to make it easier to pound into the ground.

The actual raised bed box was built with little  effort using three screws on each side of the end pieces. As I indicated earlier, I have enough property for my needs, but very little of it is level. I wanted the box level both front to back, and side to side. The area I chose tilted down both right to left and back to front. This necessitated some digging to get the box level on the ground and did take some effort in both the digging and the leveling. 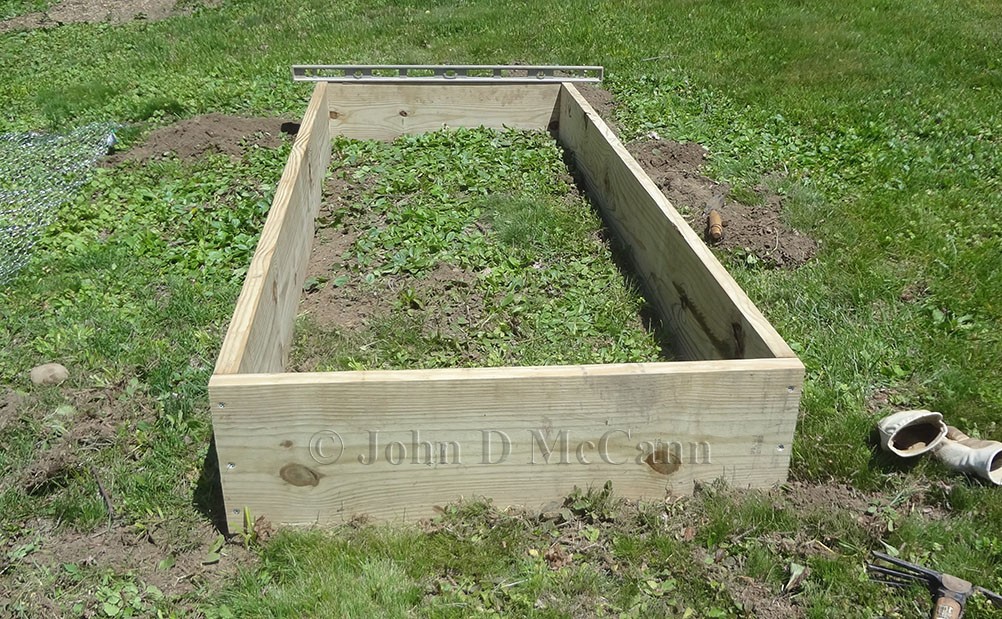 The raised bed box complete and being leveled on the ground. 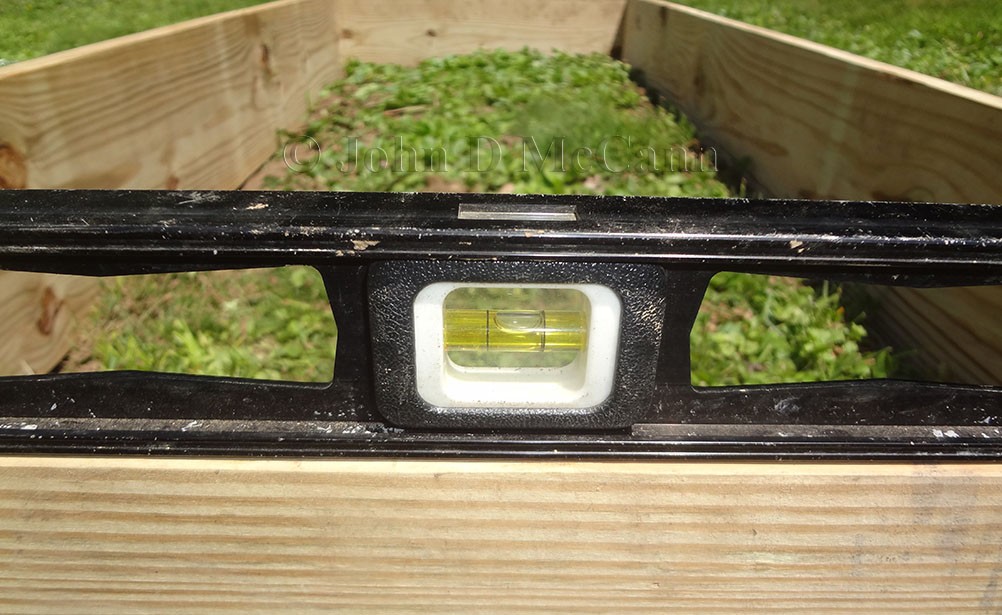 Although not perfect, this photo shows the box was relatively level once the digging was done.

This shows the stakes pounded into the ground and attached to the inside ends.

This shows the four stakes on each side and then attached to the box with screws.

After the box was leveled and secured to the ground with stakes, I decided that I would line the bottom of the box with chicken wire, as the local woodchucks like to dig under things that provide food. I figured they could probably just climb over the sides, but I didn't want digging going on. The wire was laid into the box and bent up over the sides, where it was well stapled. 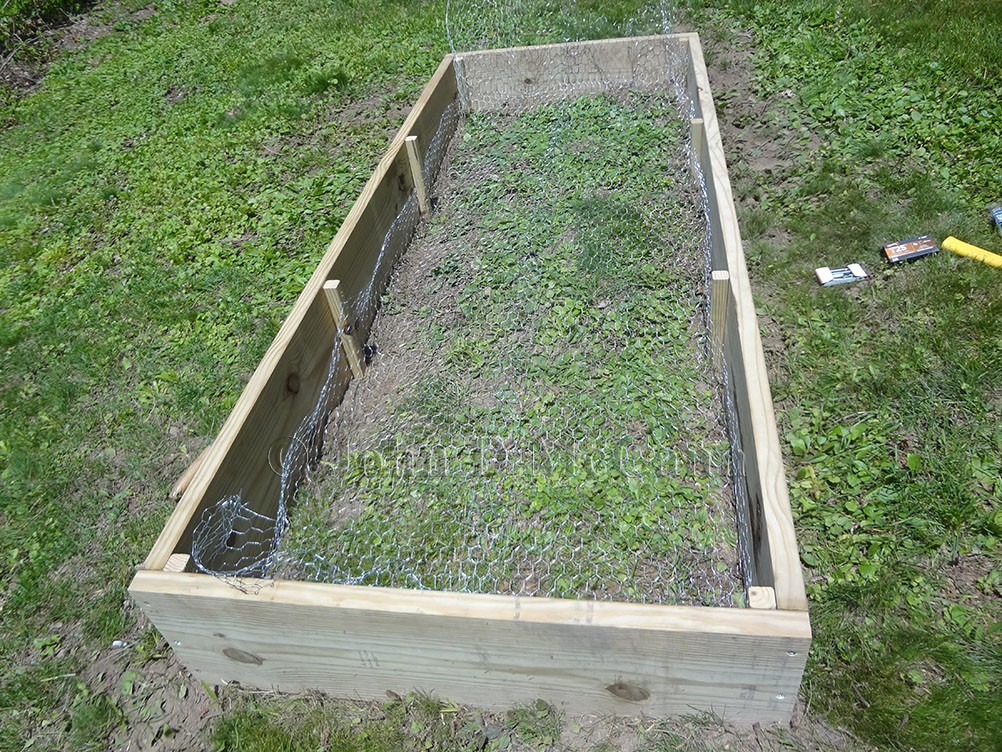 This photo shows chicken wire being added inside the box. 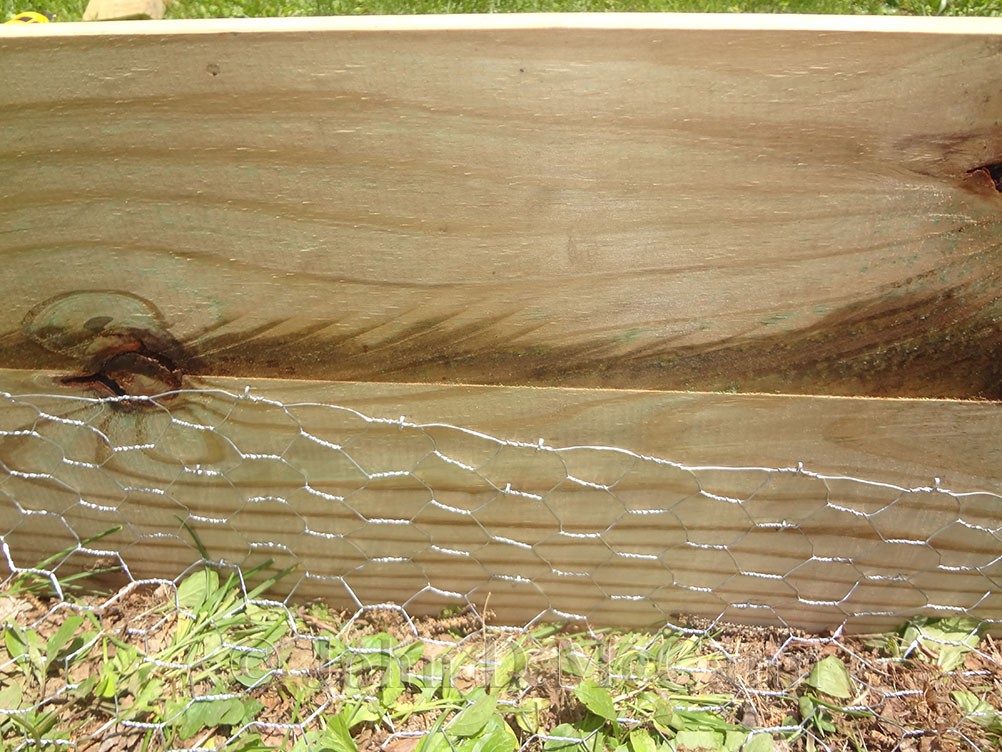 The chicken wire was bent up on the sides and well stapled.

In order to be able to add hoops when desired or required, I had to make some brackets that would hold the hoops. I figured PVC pipe would work for my needs. I purchased some 1/2" for the hoops and /4" for the brackets. The smaller slides nicely into the larger without being too tight. Instead of white PVC pipe I used FlowGuard Gold as it is beige and aesthetically looked nicer on the wood (of course the white would work just fine as well).

I wanted five hoops, so for the brackets, I cut ten 6" lengths of the 3/4" pipe. I then drilled a hole 1/2" up from the end. I would use a 3/4" pipe bracket at the top to hold the bracket in place. A screw would be inserted through the hole in the bottom and attached to the frame as well. This screw would keep the bracket from sliding down or up and allow water to drain from the bracket. 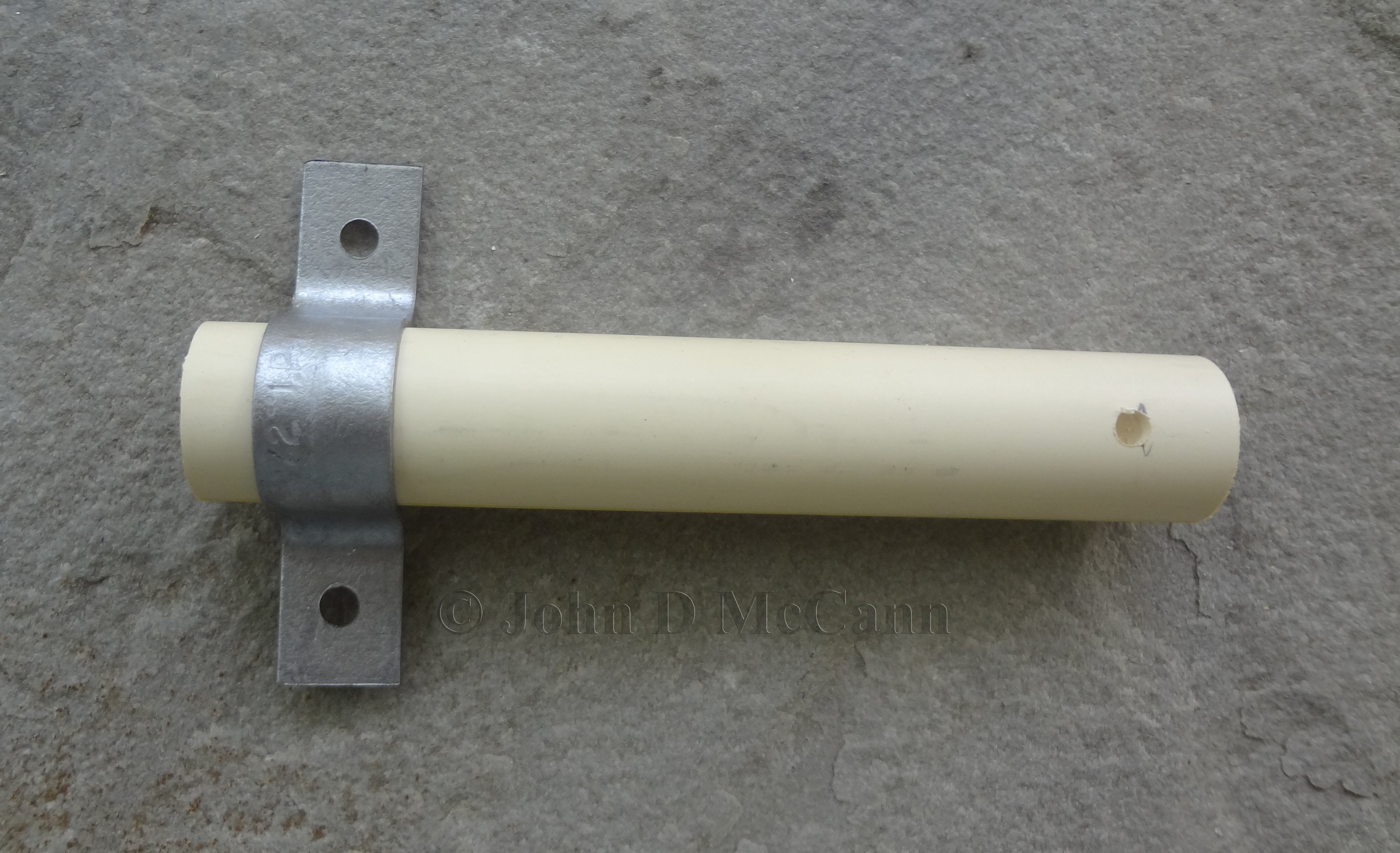 A view of the bracket which would be used to hold the hoops. 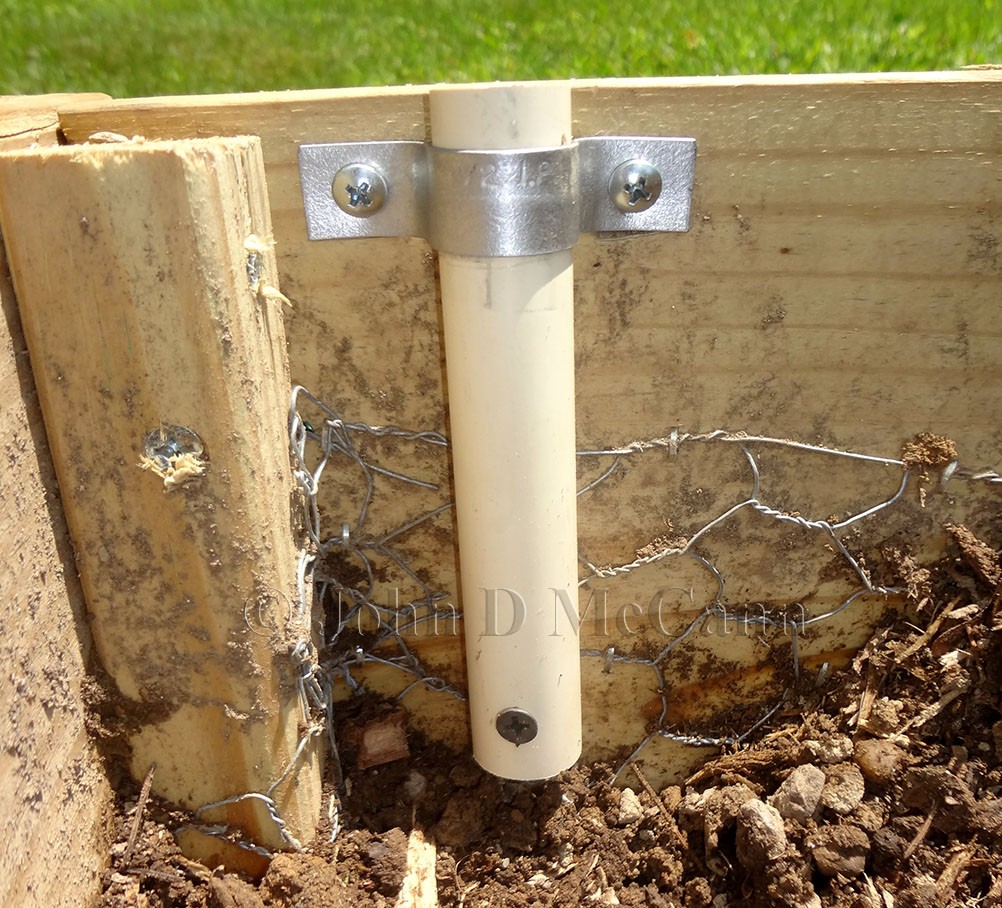 This shows how the brackets were attached to the inside of the raised bed. 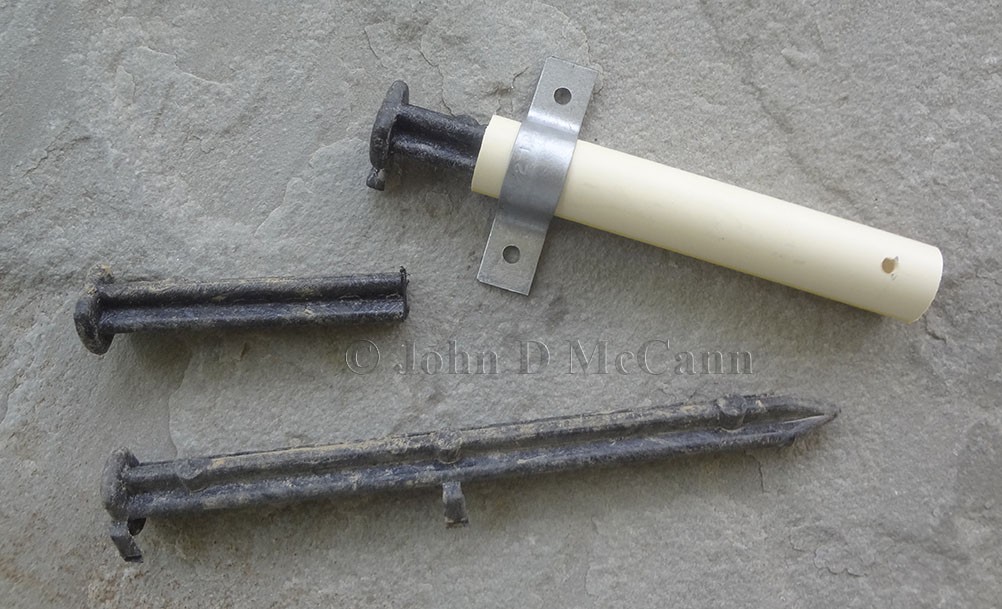 A view of the old plastic stakes cut down for use as plugs in the brackets. 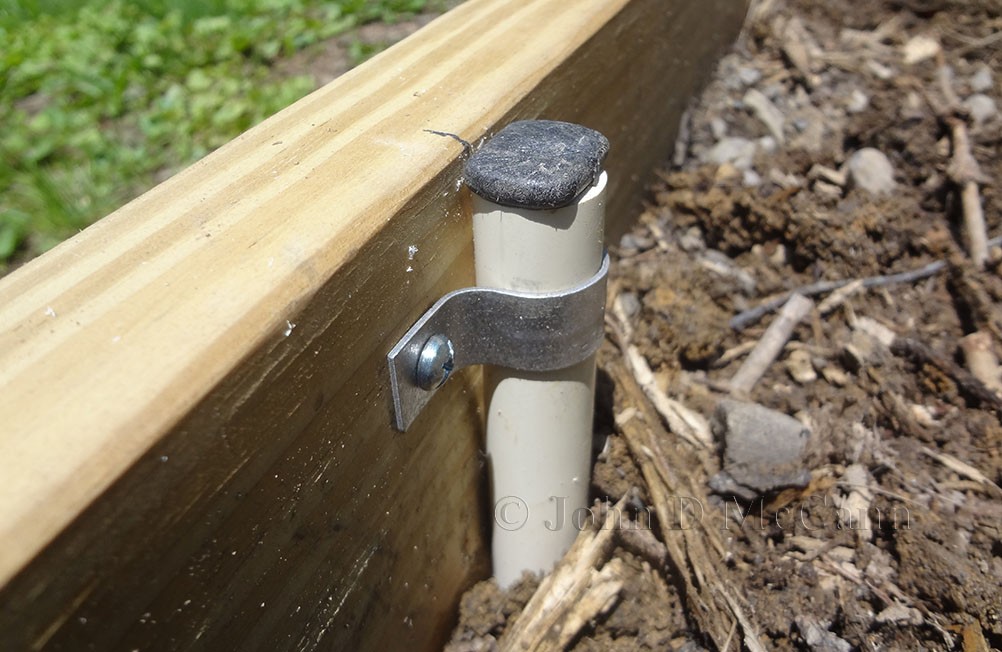 This shows the homemade plugs inserted in the hoop brackets.

After completing the raised bed and the brackets, the five 1/2" PVC pipes were cut to 7' lengths as I determined this would  provide me with the hoops I desired. They were inserted into the brackets and they worked as planned. 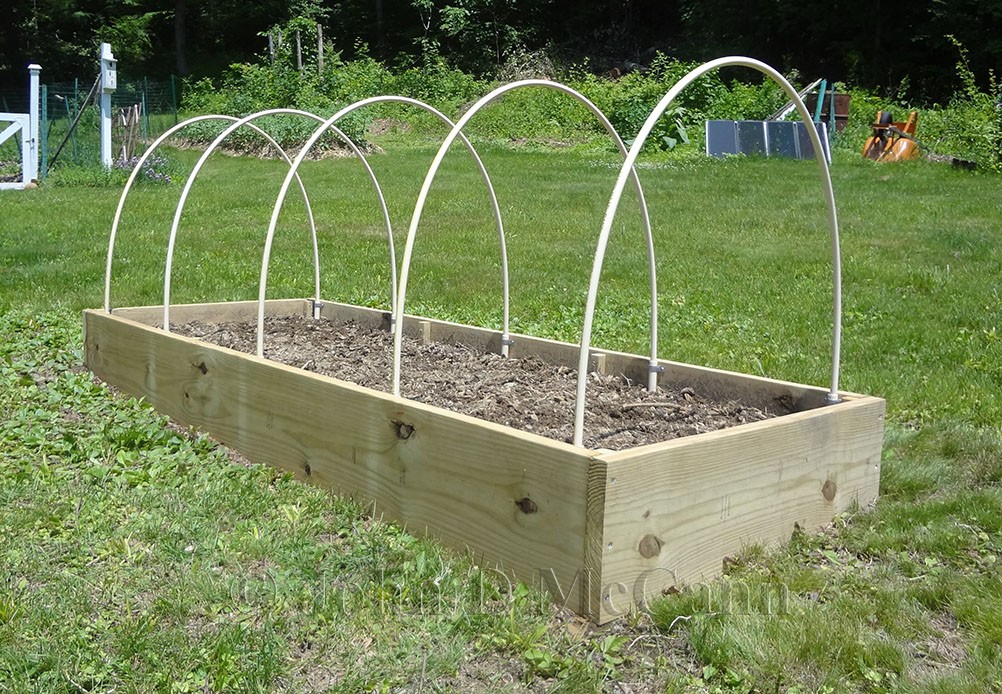 A view of the raised bed with hoops in place. 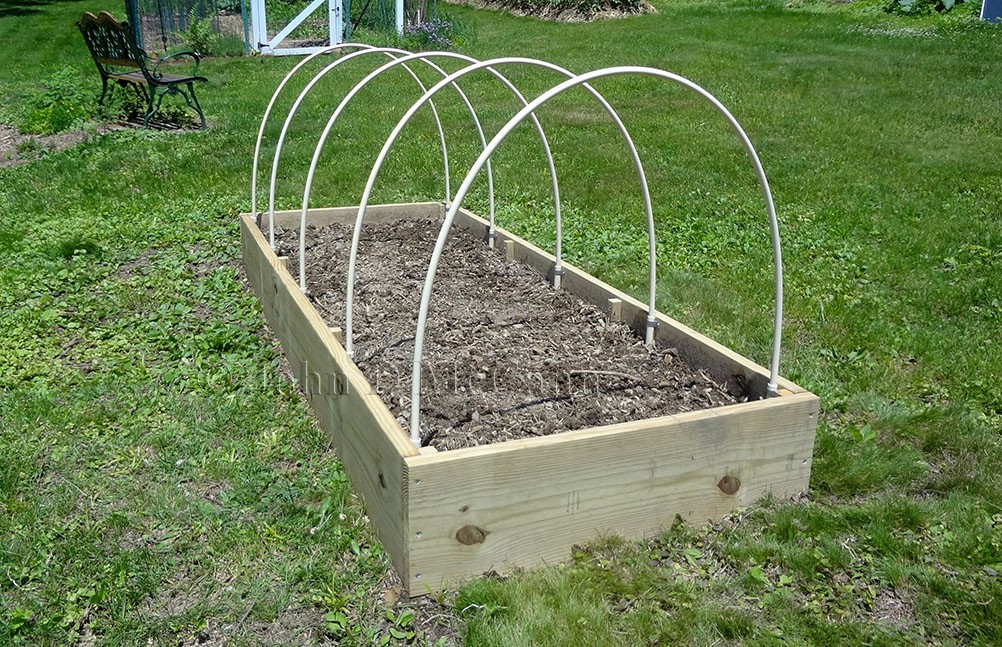 Another view of the raised bed with hoops attached. 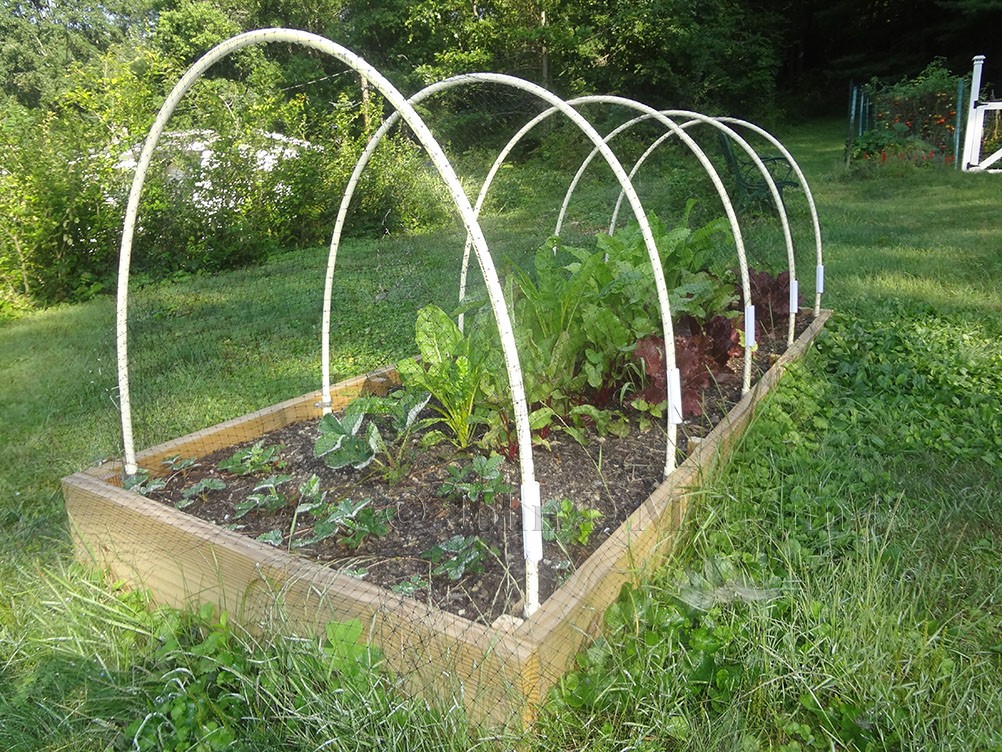 Swiss Chard and Lettuce planted with netting over the hoops. 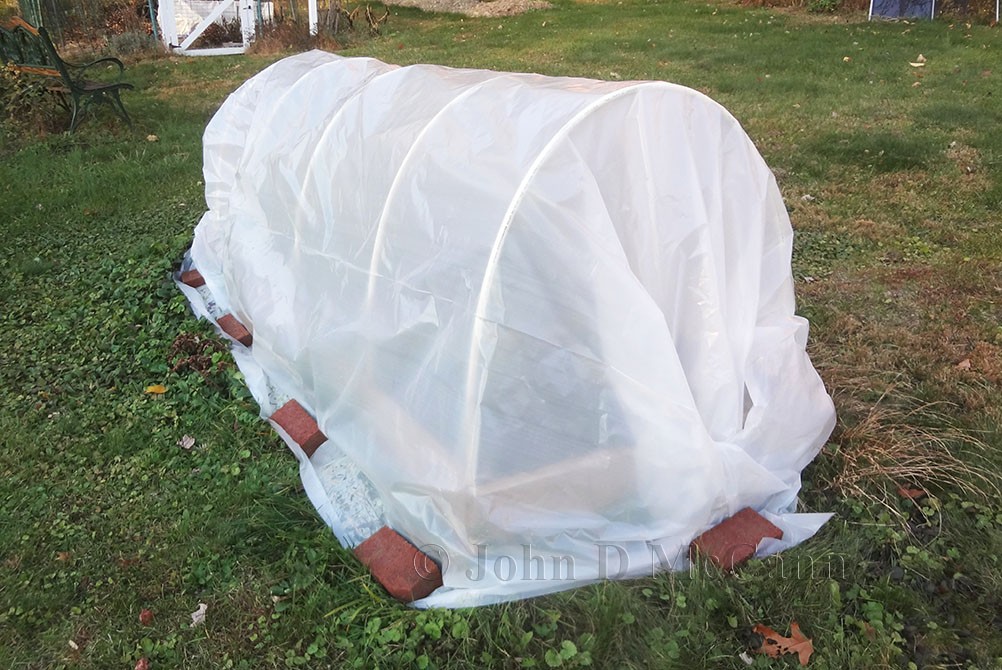 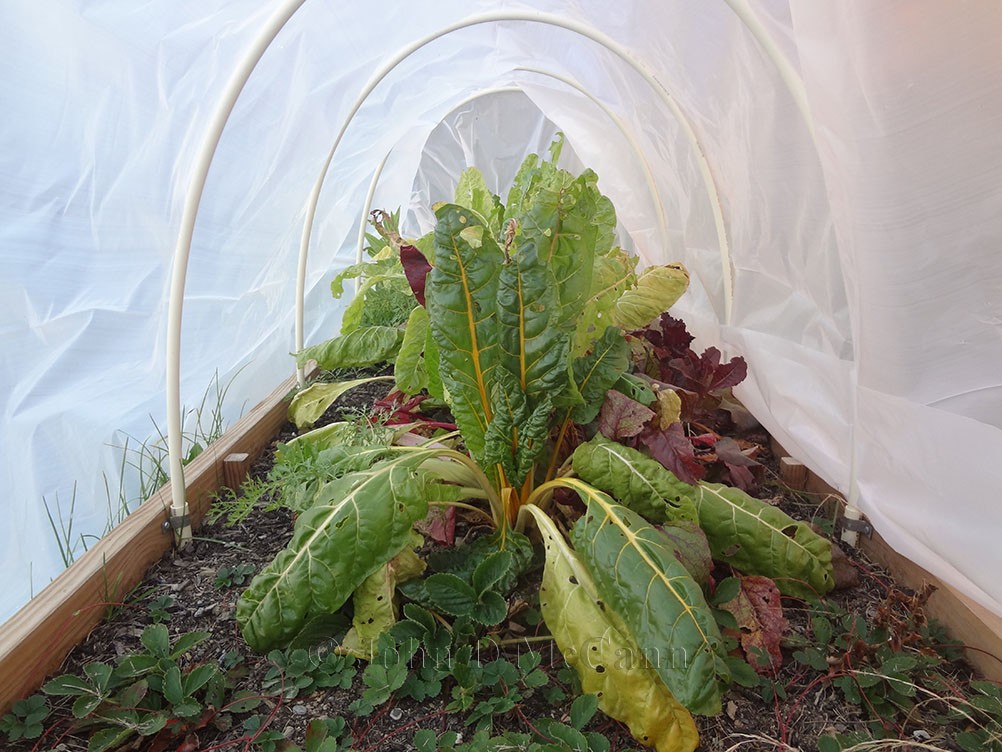 This was fun project and I now have a raised bed with the option of making it a hoop house for either plastic or netting. I plan on working on other ideas as well.

It should be noted that upon completion of this project I felt I had been rather creative. I wondered how many other people had thought of a similar configuration. I did a search on Pinterest for "raised bed hoop house" and needless to say, I was amazed how many other people had come up with the same, or similar, configuration. It just goes to show that there really are not many original ideas to day.