If you are in an area where you are competing with other animals for food, you will want to use a means to raise the animal you caught in a snare, up and off the ground.  These types of snares have been called "Twitch-Ups", "Spring Poles", "Spring Snares" and "Branch Lifts".  For the purpose of this article, when I talk about the engine that raises the caught animal, I will call it a "Spring Pole".

The engine that raises the animal doesn't have to be a branch or spring pole.  It can be a large log or rock tied to a piece of cordage that goes up and over the branch of a tree, or even a seesaw type engine that has weight on one end and raises the animal when caught.  If you do use a sapling as your Spring Pole, make sure you clean all the limbs off of it, as it will spring up much faster when it is bare.  Also keep in mind, that if you do not have a green sapling next to an animal run, where you want to place a snare, you can cut a sapling and tie it to a larger tree next to the animal run.  Tie the bottom, wide portion, securely to a tree using stout cordage like parachute cord.  Now you can bend the top portion over for your engine, just as if you had a sapling where you wanted it! 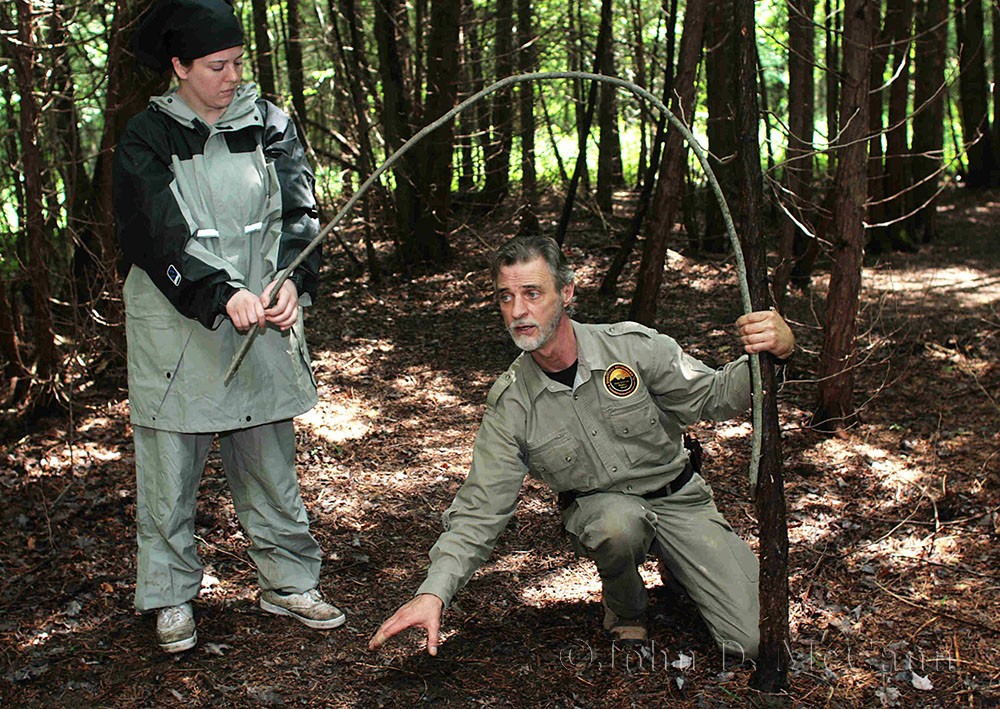 Here I have a student help me show other students how a sapling can be attached to a tree in the area
you want it, if a sapling is not available.

In order for the Spring Pole", or engine, to raise the animal after it is caught in the snare loop, you will need some type of trigger, in order to trigger the engine to raise up.   There are hundreds of triggers, but in order to give you an idea of the simplicity of some triggers, I will show only a few.  Keep in mind, and this is important, the snare wire must always be connected to the part of the trigger that is attached to the Spring Pole engine.  Otherwise, when the trigger disengages, the Spring Pole will go up, but the animal won't.

The first trigger is a Two Pin Toggle, which just uses two carved pieces of wood which mate, and are held together by the upward pressure from the engine.  The snare wire and the cordage going to the engine are both secured to the top piece of the Two Pin Toggle.  When an animal is caught in the snare, the movement disengages the two toggles, and the snare is raised up by the engine.  It is very simple to make. 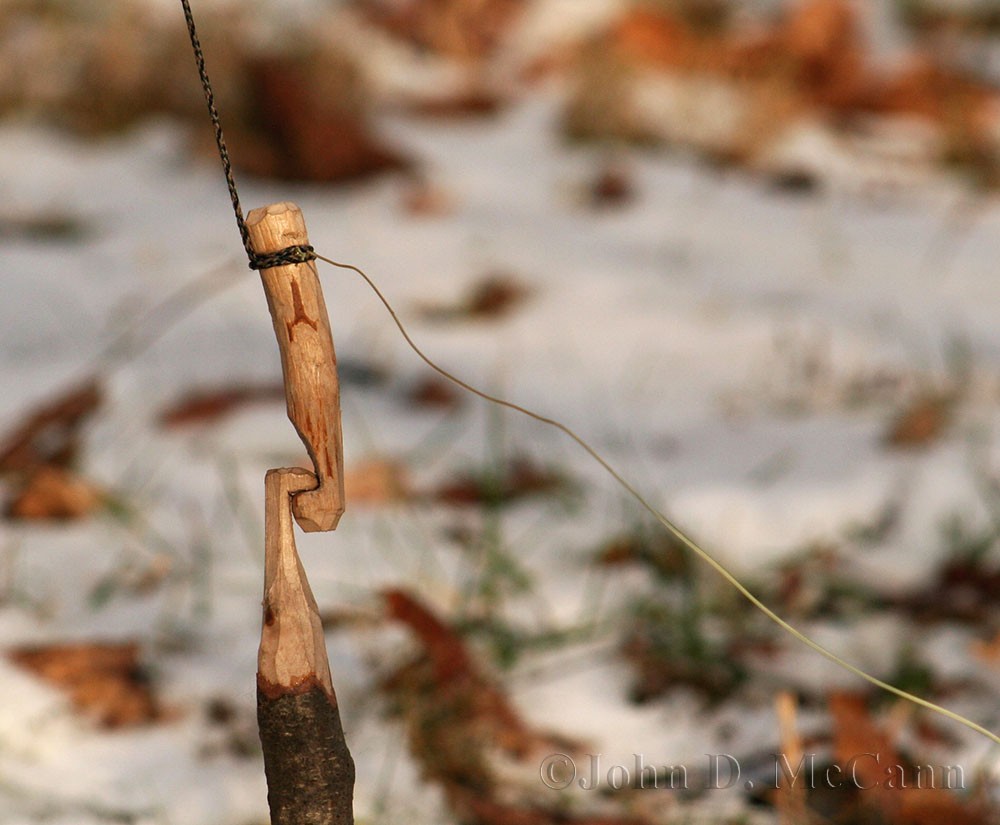 This is a close up of a Two Pin Toggle Trigger.

The next trigger is called a Rolling Snare and uses two "Y" branches.  One is cut with one long side which can be pounded securely in the ground.  The other piece has one part of the "Y" stick slightly longer than the other.  The cordage going to the engine is attached to the second "Y" stick, as well as the snare wire.  The upward pressure of the engine holds the trigger in place.  When there is movement one "Y" will roll off the other, disengaging the trigger and the engine will raise the animal. 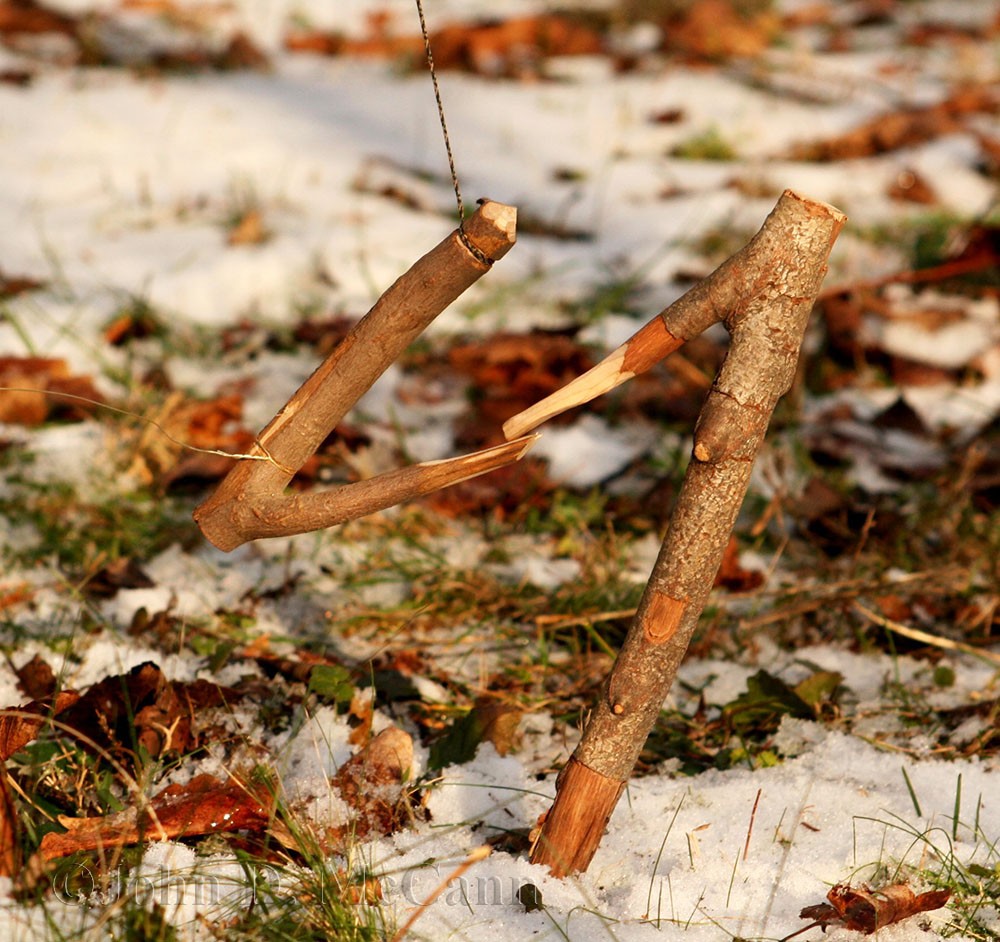 This is a close up of a Rolling Snare Trigger.

The third trigger I will discuss is the Figure "H".  This trigger uses two uprights pounded in the ground with a notch on the top side of each one.  When pounded in the ground, you face one in one direction of the animal trail, and the other notch in the opposite direction.  A stick that stretches across the width of both uprights is used to attach the snare and the spring pole.  When the spring pole is pulled down, you engage one side of the cross stick in one of the notches, and the opposite end in the other notch.   The upward pressure of the spring pole holds the cross stick in place.  The purpose of a notch in the uprights facing in opposite directions is so the snare can be triggered in either direction.  If both notches were on one side, it would only be a one direction snare, and you never know what direction the animal will come from. 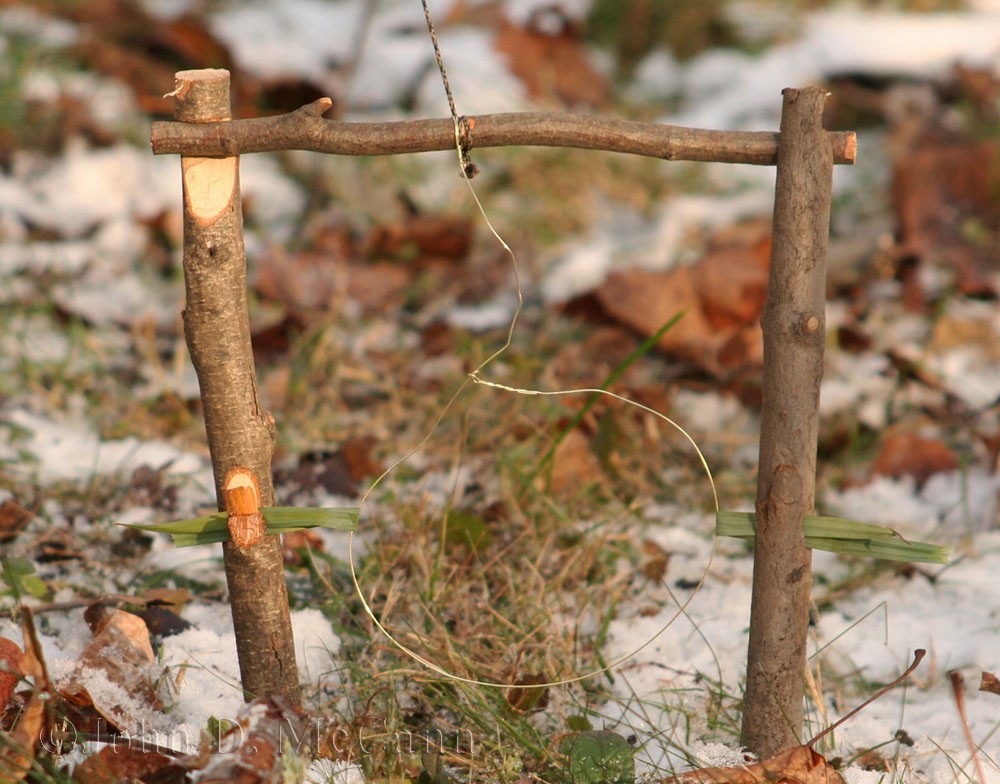 This is a close up of a Figure "H" Trigger, showing the snare being held in place using notches in
the uprights and blades of grass.

The last trigger I will discuss is the Baited Spring Leg.  This type of trigger is a little more elaborate than the previous, but is one of my favorites. The baited spring leg needs a good size "Y" stick, whereby both ends of the "Y" must be pounded into the ground.  Another piece of wood, called the bait stick, must be long enough to reach across both sides of the "Y" stick in the ground, and stick out one end to drape the snare over, or under (I prefer over).  A third piece of wood, called the toggle stick (which both the snare and engine is connected to) is used to hold the bait stick in place.  It is placed through the "Y" stick, whereby one end of the toggle is placed against the "Y" stick, and the other end is placed against the bait stick (see photo 10-77 and diagram 10-78 for details).  You must remember that when the toggle stick is passed under the "Y" stick, both the cordage attached to the spring pole AND the snare wire, must remain on the side you passed through from.  If you have the spring pole cordage on one side and the snare wire on the other, when it triggers, the animal will be pulled against the "Y" stick and will not be raise up with the spring pole. 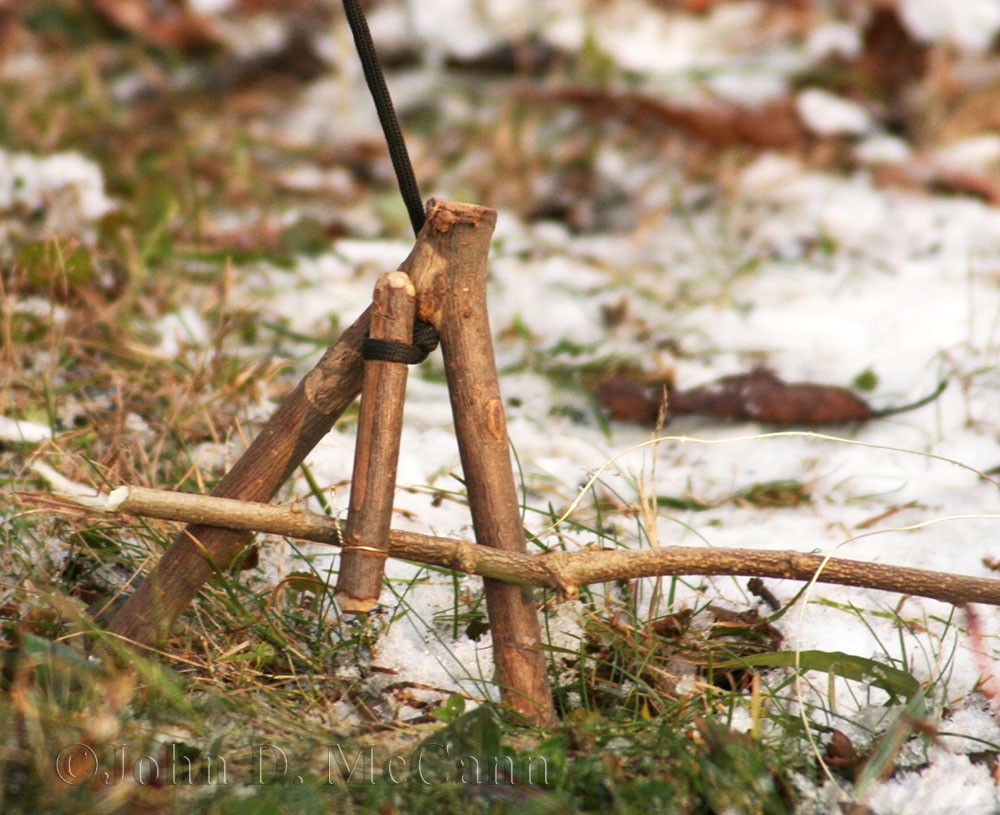 This is a close up view of a Baited Spring Leg Trigger.

Whenever using any type of a spring pole engine to lift a animal, use extreme caution when setting the trigger.  Keep you face and other body parts out of the line of pull by the engine.  If the trigger is activate, even by accident while trying to set it up, the trigger will be pulled up at a high rate of speed.  The flying trigger can poke out an eye or otherwise injure a body part.  When experimenting with these things, wear safety glasses.